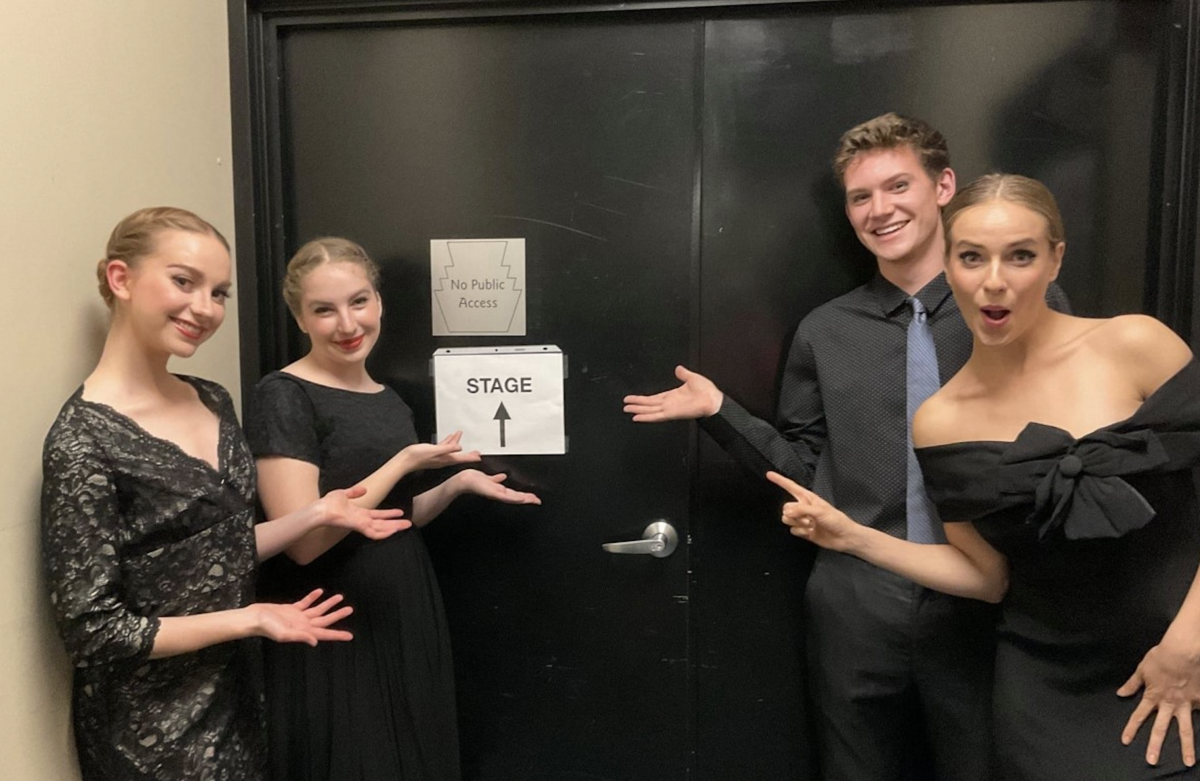 Gonzaga performers getting ready backstage for their big performance.

Hosting an on-stage performance for the first time in 25 months, the Martin Woldson Theater at the Fox held a crowd for the second showing of Orpheus and Eurydice last Sunday afternoon.

This past weekend, four Gonzaga dance majors — Ryan Hayes, Brooke Geffrey-Bowler, Alaina Margo and Maria Scott — took to the stage in a professional performance with the Inland Northwest Opera to retell the ancient legend of a man willing to go into the depths of Hell for his true love.

Directors and other team members flew from all different parts of the country to get everything put together in time for the show. Performers were part of the monthlong turnaround of the opera that was sung in Italian by the members of the INW Opera Company.

As the orchestra tuned up their instruments and the crowd settled in, part of the GU family was backstage getting ready for their second professional showing of "Orpheus and Eurydice."

Suzanne Ostersmith, associate professor and director of the dance program at GU, was selected as a local choreographer for the opera and when asked to find dancers, suggested that a few of her GU dance majors would be a good fit for the show.

“I was quite delighted to see all four students rise to the challenge of the occasion,” Ostersmith said.

Ostersmith said her dancers were eager and thrilled to be a part of their first professional gigs, being that the two seniors, Hayes and Geffrey-Bowler, intend on becoming professional performers.

In comparison to dancing as a student, under the professional realm of things there are a lot more moving parts to create the stage presence of an opera.

“Working with a live orchestra makes things a lot different because it’s a collaboration with musicians and dancers,” Geffrey-Bowler said. “I think being involved with professionals in so many different fields was really exciting and a great opportunity.”

The students were introduced to a new network of the industry and experienced firsthand the collaboration between a variety of artistic mediums.

The dancers took on a few different roles throughout the story, such as mourners of Eurydice’s death, furies at the gates of hell and members of Elysium, a dream-like state in the underworld.

In the beginning of the act II intermission, Geffrey-Bowler and Hayes took the spotlight from Orpheus for a minute as they performed a pas de deux, or partnered dance, as Orpheus was preparing to enter Elysium.

“It’s pretty phenomenal to be working professionally as an undergrad student,” Ostersmith said. “This has been a thrilling experience to be in this setting with my students.”

Scott, a GU first-year and double major in dance and psychology, was ready to take on the professional side of the dance world back in September when she auditioned for the opera.

“It has been an incredibly positive experience and an even more incredible opportunity to dance with the Inland Northwest Opera Company,” Scott said. “It’s also nice to get paid doing what you love.”

This opera was an opportunity to bring the art-loving community back together after prolonged months of being apart due to the pandemic and it was also an opportunity for Zags to engage with a community beyond the one on campus.

For any future events at the Fox Theater, it is required to bring proof of vaccination or a negative COVID-19 test to ensure entry to the auditorium.

Food for thought: The journey from farm to serving meals at the COG