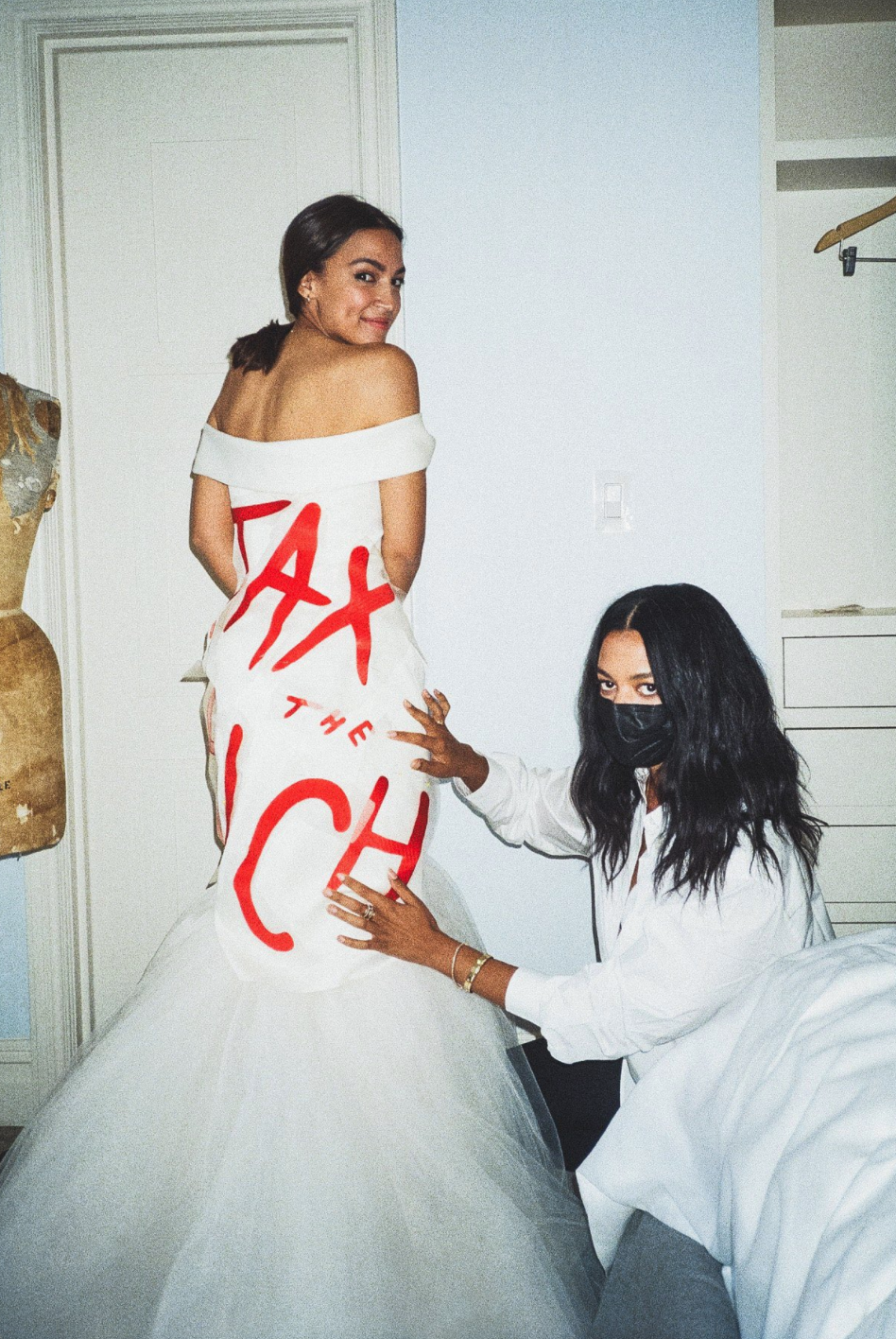 Alexandria Ocasio-Cortez and her designer, Aurora James, pose with her statement dress. 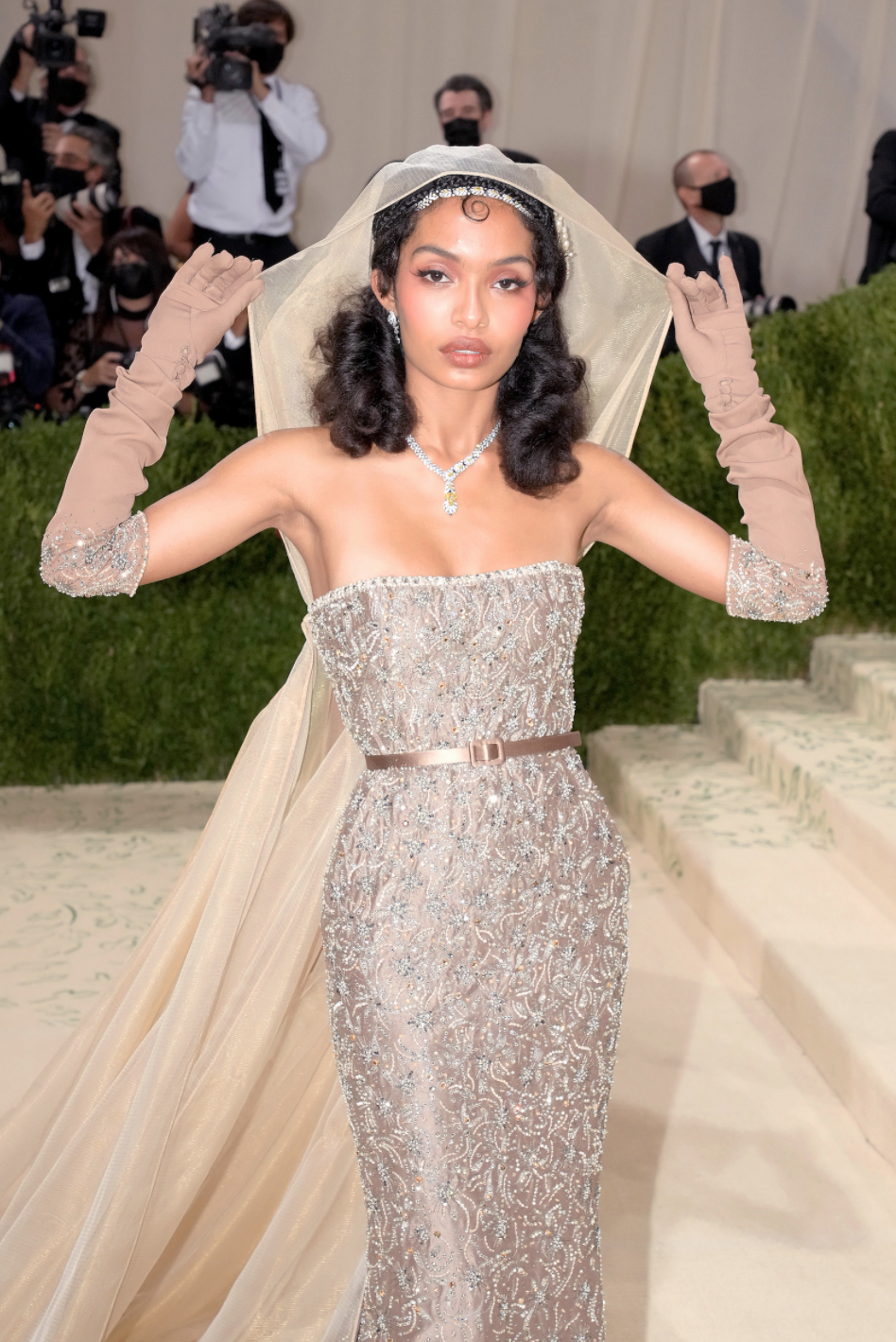 Alexandria Ocasio-Cortez and her designer, Aurora James, pose with her statement dress.

For decades the first Monday in May has been the biggest night in fashion—the evening when the fashion-obsessed meet in costume on the red carpet at the Met Gala. This year, COVID-19 may have postponed the annual fixture in New York’s social calendar to the second Monday in September, but it didn’t fail to serve up its share of red carpet hits and misses.

But it's not charity that draws eyes every year. It’s the chance to get judgy with celebrity guests who are interpret the year’s theme through dress. Reviews can be slavish or brutal.

A mandate insisted that guests wear masks inside the event. The fashion savvy responded by matching their masks to their outfits. Those who flopped may have been glad for the opportunity to apply the disguise.

This year’s theme —“In America: a Lexicon of Fashion”—had some attendees dredging up the country’s bygone fashion and others trying to predict the future.

And, if political division can be considered a fashion trend, outspoken congresswoman Alexandria Ocasio-Cortez struck directly at the current mood. Her full-length white gown by Aurora James was emblazoned with the words “Tax the Rich.” This was worn at an event costing $30,000 a person. With the defiant message “Peg the Patriarchy,” model Cara Delevigne’s vest from Dior’s Maria Grazia seemed rather like a warrior’s breastplate.

Still, the night was meant to be inclusive with an introductory video of the exhibit that evoked America as a patchwork guilt.  With all of the reasons we have had to alienate each other this year, it was wishful thinking.

The best looks were those that that took inspiration from the past, but added their own twists.

By far the most popular theme was to emulate was an Old Hollywood aesthetic. Cochair Billie Eilish became Maryliyn Monroe reincarnated in Oscar de la Renta, while Megan Thee Stallion, head to toe in Coach attire dubbed herself “Megan Monroe.” Kendall Jenner recalled Audrey Hepburn with her choice of Givenchy, the designer with Hepburn was so closely associated. Yara Shahidi in Dior channeled the stunning Josephine Baker.

Those who succeeded with past-era looks did so by recalling familiar characters. The actress Lupita Nyong'o in Versace revived the 90s with a nod to the iconic Brittany and Justin denim look. In Rodarte, rappers Halle and Chloe Bailey’s reached back even further, capturing the look of 80s’ singing star Janet Jackson.

The daring looked to the future of fashion. Singer Frank Ocean showed up to the carpet with a robot baby in hand, and Prada on his body. Also in Prada, the actress Hunter Scaffer sported in a metallic outfit, replete with silver spider on her face and white contacts to hide her eyes. The singer Grimes was startling with an outfit, from designer Iris van Herpen. Based on the American dystopian novel Dune, it included a sword made of melted guns.

At first glance actress Lilli Reinhart and singer Lorde didn't appear to commit to the theme. Then the complexity of their dresses sank in. Lorde was an Americana princess with a crown. She worked with designer Emily Bode to repurpose items in a dress that was hung with dozens of flattened pennies one of the kind made in machines at theme parks. Reinhart’s Christiano Sirano dress was adorned with the states flowers of each of the 50 states.

But in a land peopled by immigrants, perhaps cohost Naomi Osaka in a collaboration with Nicolas Ghesquière, made the most American statement of all. Her dress paid tribute to both her Japanese-Haitan heritage. What’s more melting pot than that?

Abigail Bettridge is a contributor.

Food cart to brick and mortar: crepes and waffles

ZAC is back: Pop edition

Spokane is on a (sushi) roll: Best sushi spots near GU's campus

'I can't believe it's not vegan' friendly restaurants in Spokane

One step toward an artistic evolution: "The Melodic Blue" review