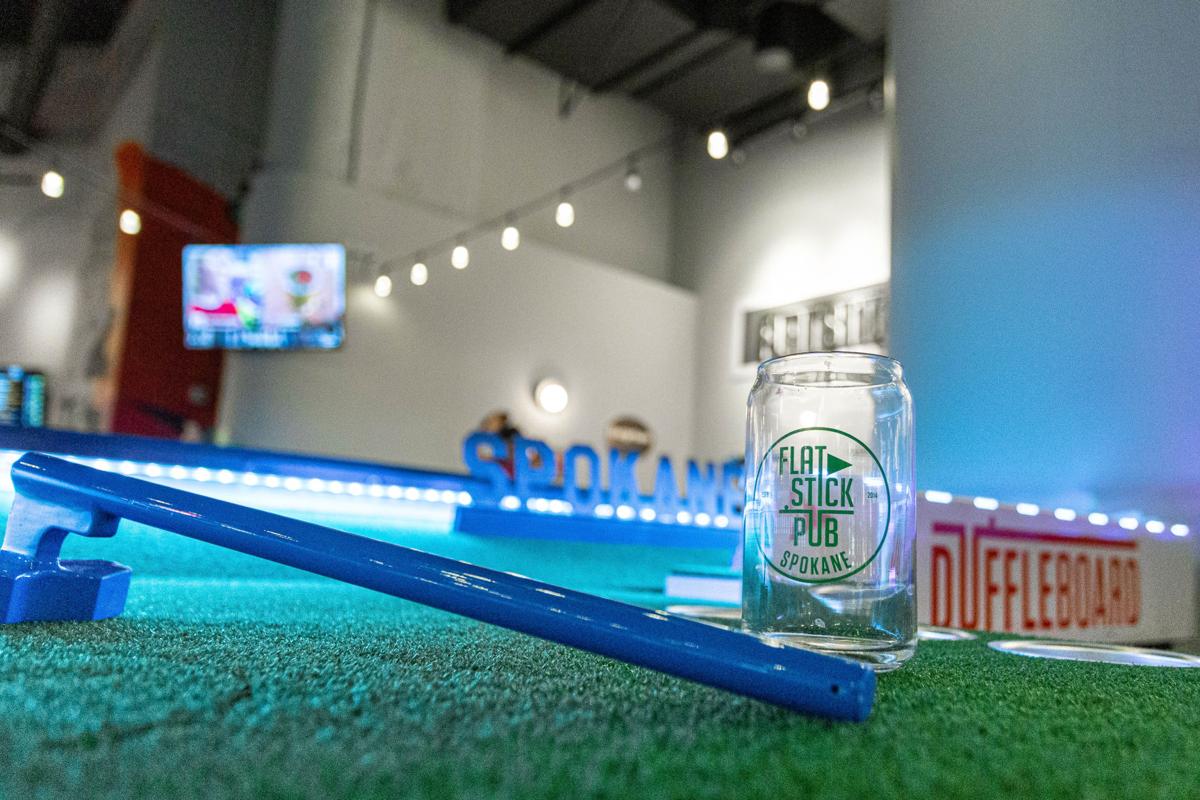 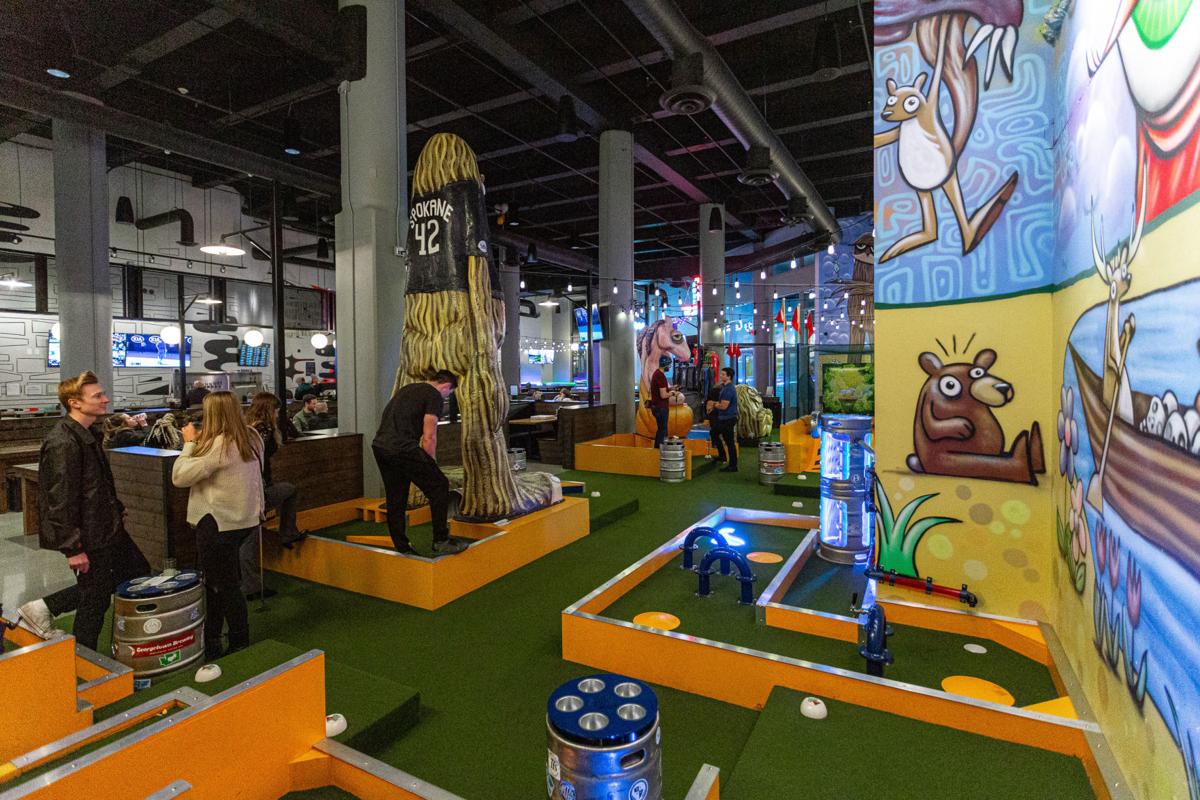 Depending on who you ask, mini golf and beer is the ultimate recipe for a good time.

Well, it is if you ask me anyway.

Flatstick Pub, located at 618 W. Main Ave., in downtown Spokane, is the picturesque place to putt-putt and put back pints with pals.

“There are only two rules at Flatstick Pub,” the pub’s website says.  “Drink local and have fun.”

Since 2014, Flatstick has served up mini golf and beer in a bar atmosphere at three locations in and surrounding Seattle, but it wasn’t until late 2019 that the pub made the jump across the Cascades to open its Spokane location.

“We’d been looking to open [a Flatstick location] over here for a while now,” said Dan Largent, the general manager of Flatstick Pub in Spokane.

Flatstick Pub is owned by Dan Largent’s brothers, Sam and Andy Largent. The siblings grew up in Spokane and made it a goal to bring the pub to their hometown.

“Sam and Andy were just being selective on where they wanted to go in Spokane and when this location opened up, they started moving pretty quickly,” Dan said. “Once that process started, this was kind of a no-brainer.”

On tap at Flatstick’s Spokane location are nine holes of mini golf, 34 locally sourced alcoholic beverages, an array of food from pizza and appetizers to salads and desserts, new and cutting-edge games unique to Flatstick and breathtaking murals on the walls.

Along the mini golf course, a sensationalized Sasquatch looming some-20 feet above the seventh hole and a two-headed pink unicorn immediately catch a golfer’s eye. But a basketball hoop on hole three, where hitting the shot induces a hole-in-one, and some Spokane-specific statues are signature connections to the pub’s location.

“All of our mini golf courses at each location, they try to put that local spin on things,” Dan said.

A bulldog, eagle and cougar gawk at golfers as they putt on hole three, an homage to the mascots of local universities: Washington State, Eastern Washington and, of course, Gonzaga.

Ryan ‘Henry’ Ward, a renowned artist well-known for his large-scale mural work in Seattle, is responsible for the artwork on the mini golf course, while all other murals in the pub were crafted by local Spokane artists.

“Local” has always been paramount at Flatstick.

“That’s sort of been our main thing from the get-go: Is everything local?” Dan said. “We are all about supporting the local community.”

In fact, the Spokane location is the first to offer beer from outside of Washington state with one tap at the pub dedicated to breweries in North Idaho, which is serving “Post Falls Rex Kwon Do,” a Hazy Indian Pale Ale from Post Falls Brewing Company, in Post Falls, Idaho.

While alcohol is served all day, Flatstick closes its doors to minors at 7 p.m. and patrons must be 21 or older. Offerings for the of-age audience include pilsners, ales, IPAs, sours, ciders, seltzers, mixed drinks and wines with eclectic names like Lumberbeard Kolsch, Holy Mountain Covenant and Old Schoolhouse Rendezvous.

Spatially, tall ceilings, an open floor plan and a full kitchen make the Spokane location of Flatstick Pub unique compared to the original site in Kirkland, Washington, and the Pioneer Square and South Lake Union locations in Seattle.

Flatstick Pub Spokane is the second location to offer a full kitchen in partnership with Ethan Stowell Restaurants, a well-known collection of Seattle-based restaurants, led by well-accomplished chef Ethan Stowell.

“They wanted to be able to offer the food, as well as the rest of the experience, we’ve been offering since the start,” Dan said. “It has been a big benefit for us, for sure.”

When you’ve washed down your pizza with a brew and the putt-putt course is no longer your thing, the grass may be greener on the Duffleboard Course, a nine-hole table game, which merges shuffleboard and mini golf, invented by the Largent brothers and their friends.

“[Duffleboard] is our next big thing,” Dan said. “Going with all the pubs is that there is going to be that element with each one, in addition to mini golf.”

Other games include Jumbo Jenga, Ball Jockey and a head-to-head table top game, which combines aspects of mini golf and air hockey, as well as Flatstick’s newest game making its debut at the Spokane location, Skunderball, where contestants compete shooting foam balls at targets using slingshots.

And don’t worry, every hole and game has cup holders to holster your beverage while you compete.

“It is a great place to hang out,” Dan said. “There is always something to do rather than just sit and drink your beer.”