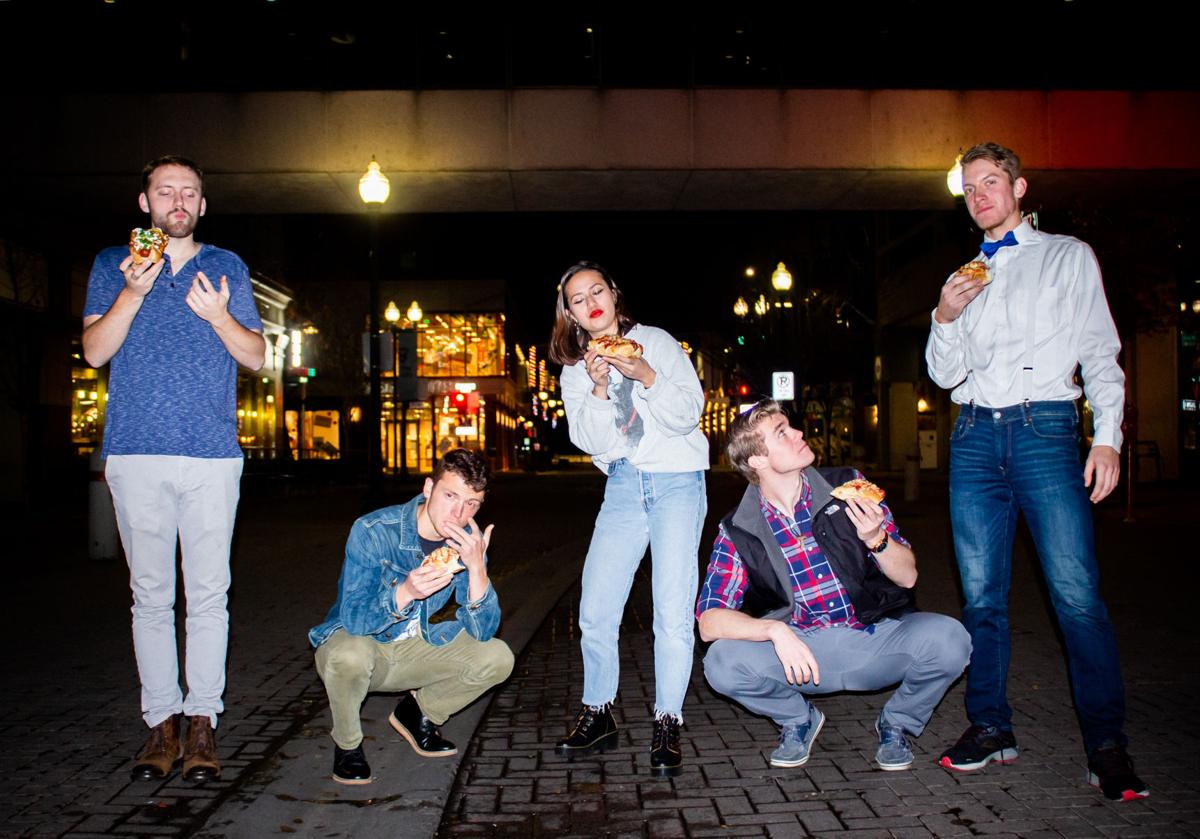 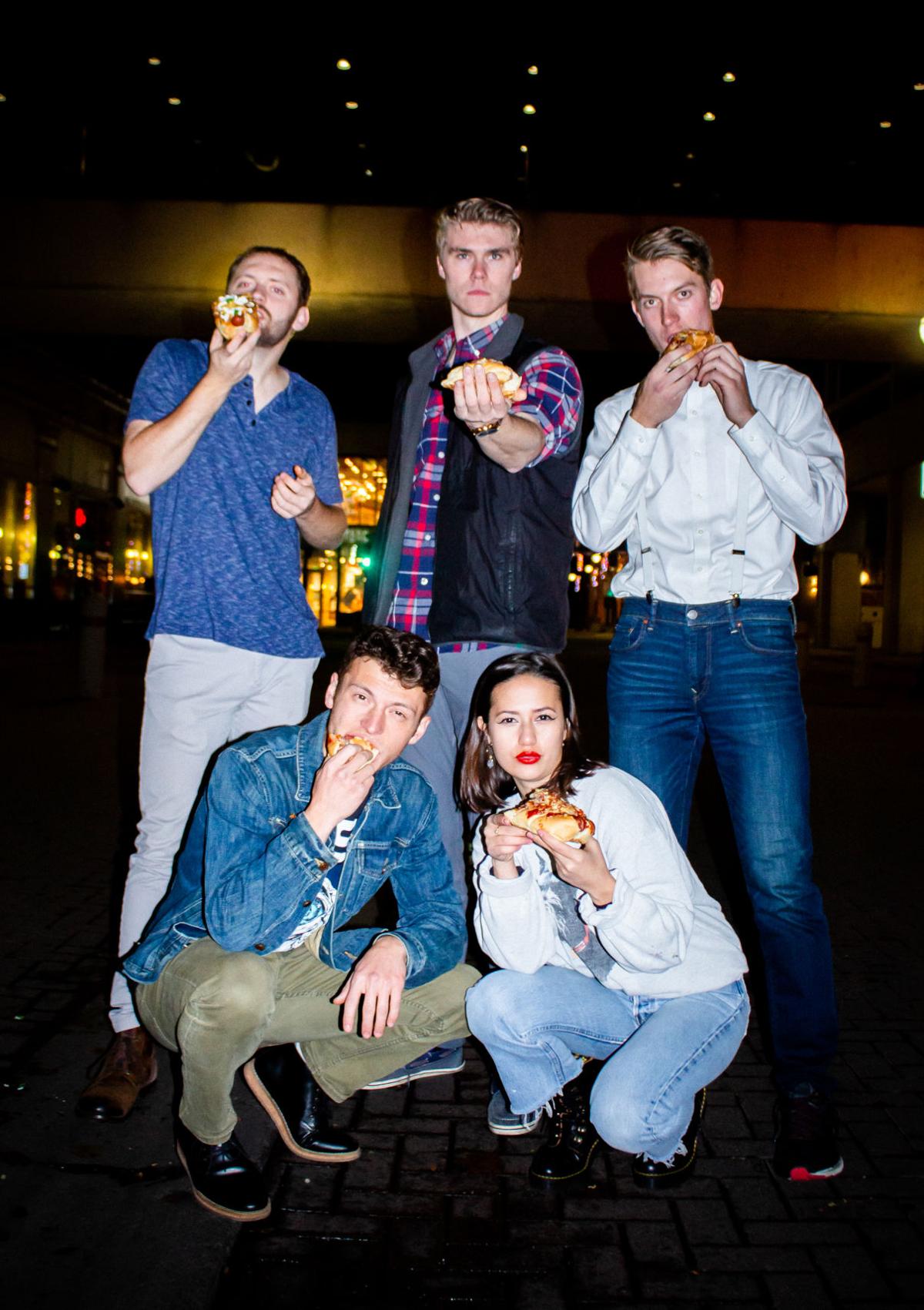 GU student band Late Night Snaq hopes to release an EP or album before the school year is over.

GU student band Late Night Snaq hopes to release an EP or album before the school year is over.

The sound of Mac Miller’s “Dang!” was the first thing to unite Late Night Snaq.

“I was really skeptical if things would work, but as soon as Michael played the key part, Ryan was playing the bass part, Sydney had the guitar part and we were waiting on Jason to sing that first line and he just nailed it,” senior Evan Cox said. “I had goosebumps because I just knew it was going to be awesome.”

Late Night Snaq came together around last November. The band is made up of Evan Cox who plays the drums, Jason Orr, who sings and occasionally picks up a guitar, Sydney Schmidt, who plays lead guitar, Michael Zell, who plays the keys and the guitar quite a bit and Ryan Ward, who plays the bass. They are all seniors except for Zell who is a junior.

Cox was the focal point who knew everyone and pulled them together.

Schmidt and Cox are both from Spokane and had been in several bands together in college and high school.

Cox knew Ward because they are both civil engineers and good friends.

“I knew he was a solid guy who would make a great band member so I kind of pushed him to get a bass,” Cox said.

Zell and Cox had played in jazz combos together at GU.

Cox and Orr lived in the same hallway freshman year and roomed together while at Gonzaga-in-Florence. Orr went to see Cox and Schmidt perform at a house in the Logan Neighborhood and walked away feeling like he had to help him in some way.

“[Cox has] always wanted to do drumming and it felt like I really had this calling that I wanted to do something for him,” Orr said.

Orr sent Cox a text the next day saying he wanted to help him with his music career and Cox asked him how he felt about singing.

Cox had never heard him sing before.

“He’s a very witty guy who I knew would just make a perfect singer, the perfect stage presence,” Cox said.

After the first time the band met up, Cox knew they had something special.

Before their first gig, Late Night Snaq was struggling to figure out a name.

“I’m pretty sure that we were on one of those online band name generators,” Schmidt said.

“We were sitting in the Music Annex, all five of us, looking at the ground just spit balling all of these names and none of them were sticking at all,” Orr said.

Someone said they had to go in five minutes and one of the band members threw the name Late Night Snaq into the abyss. At this point, it was already late in the night and they wanted something to eat, so the name stuck.

The band described their dynamic as laid back, goofy and fun.

“We have similar minds, we are all studying very similar things,” Orr said. “We have four engineers and one math major.”

The members of Late Night Snaq have all become really good friends.

An important part of any band is the comradery between the members.

“You can be the best players in the world but if you don’t look like you’re having fun together, nobody wants to watch you,” Schmidt said. “We are all friends and you can just tell that we have the best time when we play.”

Late Night Snaq has done gigs whenever and wherever they find them.

“We get out into the community but also stay on campus,” Cox said.

They’ve performed at many events ranging from school functions, to local restaurants, to house parties. On Nov. 14, they played at Globe Bar & Kitchen Spokane and on Nov. 15 they played at Forza Coffee Company. They are starting to see if they can get some regular gigs downtown.

Collectively, the members of Late Night Snaq enjoy playing for their friends at house parties the most.

“It’s fun playing for people you know,” Ward said. “There’s not a lot of room, your good friends are five-feet in front of you and the houses get really hot, which is kind of intense, which is fun.”

Playing for their friends provides a lot of energy for the band.

“I love when people are singing the words back,” Orr said. “I’ve never had a feeling like that where people in the audience that are absolutely grooving to the music.”

Orr’s favorite show thus far was Halloween night when they performed at the closing of Lindaman’s, a local restaurant which had been open for 35 years.

“It was a little bit of an older crowd, but we were definitely catering to that timeframe of music doing Prince and the Eagles and everyone in our band and everyone in the audience had a really fun time,” Orr said.

Another gig which stood out to both Schmidt and Ward was at a house party during parent’s weekend with a bunch of upperclassmen and their parents.

“The last time my parents had seen me play music was in high school when they were still forcing me to take piano and trumpet lessons and I hated it,” Ward said. “I was really excited for them to see me play music and actually enjoy it and have fun with it.”

Zell looks fondly back on a gig they did at the end of last semester for the engineering professors.

“We were playing ‘Rocket Man’ which is like our signature song and Jason always climbs up on something and sings it,” Zell said. “The sun was just setting and I was just playing and looking into the sunset and it was a really cool feeling.”

Late Night Snaq performs covers almost exclusively. They have a large volume of about 60 songs and play the different sets for each gig.

Their goal is to do all genres as much as they can.

“We will do rap with Outkast, we’ll do rock with the Eagles, we’ll do Ed Sheeran,” Orr said.

By playing songs across many musical genres, Late Night Snaq caters to the student demographic.

College-age students seem to bounce between listening to a variety of genres.

The band puts a creative spin on its covers and do interesting arrangements of songs.

“A couple of us do jazz at Gonzaga, so we try to take a lot of solos and do improvisation even within a cover,” Schmidt said.

Late Night Snaq has also started writing some of its own songs.

“We have a couple original songs in the works right now,” Zell said.

A band member will show a song they wrote, to the group and then they all contribute to it, similar to a group project.

“Down the road, we want to take those songs that we have written, record them and then just add a couple more new ones, maybe an album, who knows,” Orr said.

Similar to the range of covers they play, the genre of music they hope to release would be a mixture.

Not all members of Late Night Snaq envisioned themselves in a band.

Growing up, Ward was always scared to perform, but now enjoys it.

“It’s just more fun now,” Ward said. “It’s not like I’m performing for a class or at a recital for everyone’s parents. It’s a different dynamic. It’s fun now, it’s not a chore, it’s not a test or anything.”

Orr has always been someone who loves high energy and large groups of people.

“As a kid I used to pick up my toothbrush and sing in front of the mirror,” Orr said. “I never really imagined that I would be doing it, but maybe I’ve wanted to kind of subconsciously.”

Being in a band has always been something Zell has wanted to do.

“I was really into Guns N’ Roses and the Eagles, so it definitely was something I’ve wanted to do,” Zell said.

The relationships the band has developed with each other and with the people who they play for has been rewarding for the band.

“I think any time you can be the source of fun or enjoyment for a night is awesome,” Ward said.

Their performances have created an open environment where students come out of their shells dancing, talking to other people or singing along to the song.

“I really like playing live music because you are so connected with the people you are creating music with,” Schmidt said.

When Late Night Snaq first began, the band didn’t know what to expect.

“I don’t want to say our success is baffling because I believe in all of our talent, but it’s heartwarming that people seem to like us,” Schmidt said.

The band has progressed to a point where they have fans which call themselves “snackies” and are part of the “snaq pack.”

The main goal for the future of Late Night Snaq is to release some sort of EP or album before the school year is over. They have also talked about potentially trying to tour over the summer around the Pacific Northwest for a couple of weeks.