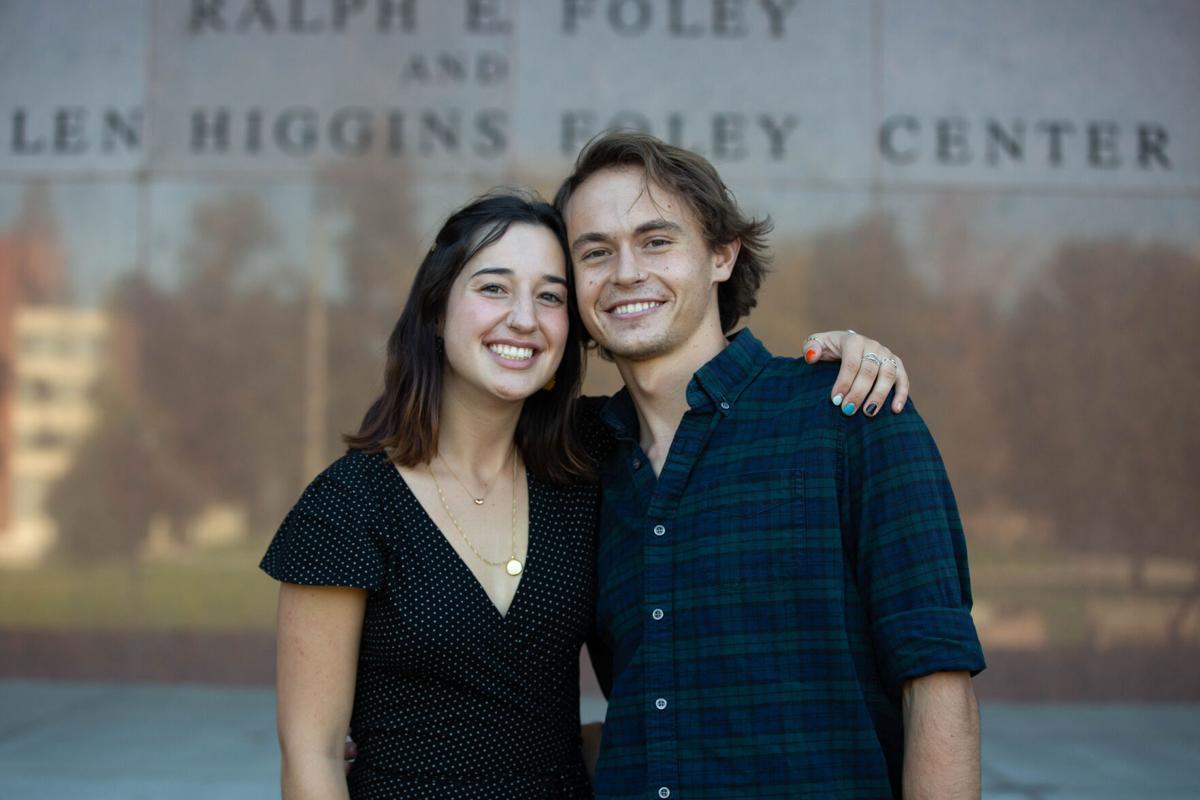 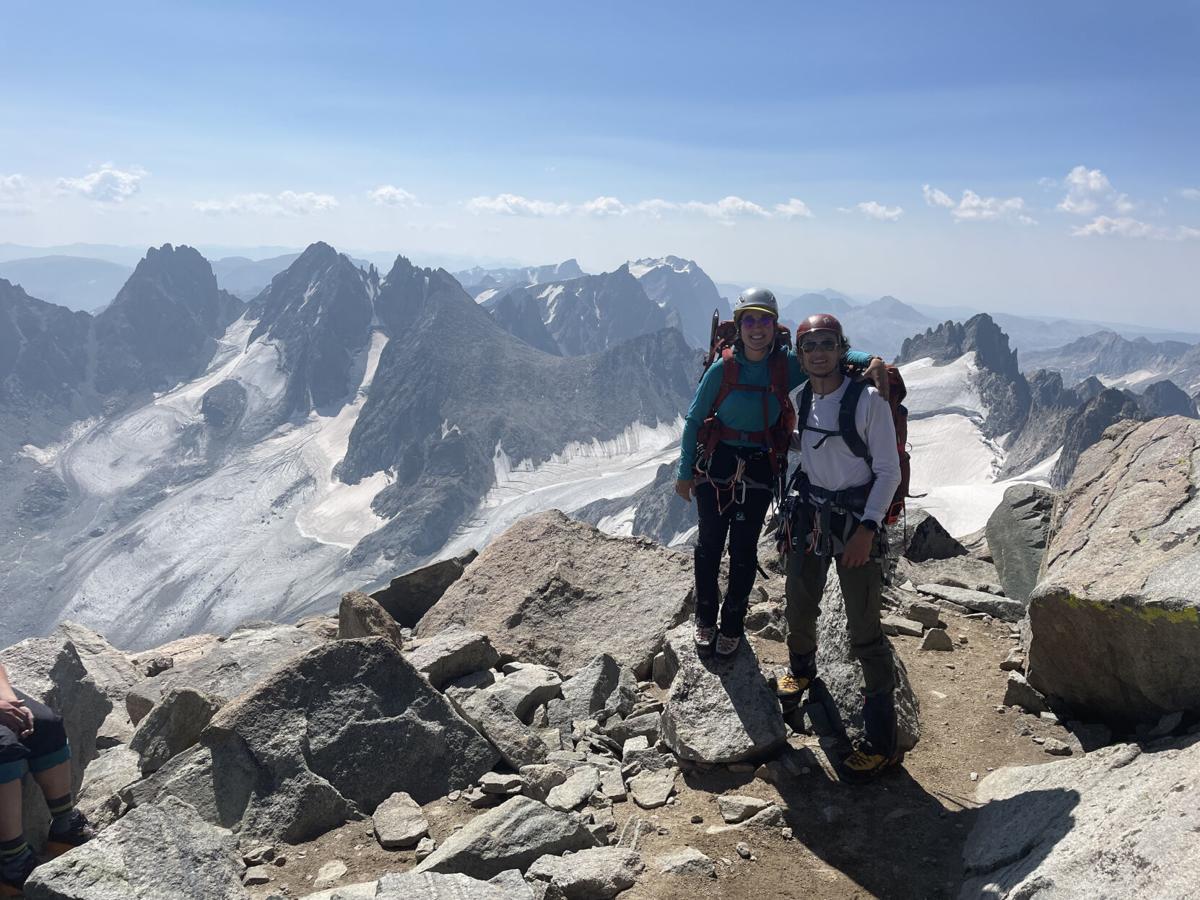 Gamache and Bredal covered 212 miles and gained 67,657 feet in elevation.

Gamache and Bredal covered 212 miles and gained 67,657 feet in elevation.

This summer, seniors Amara Gamache and Paal Bredal undertook an enterprising physical and mental feat that took them all around the continental Western United States. Their ambition was to summit the 11 tallest peaks in each state west of Colorado.

“I want to go all over the world,” Bredal said. “But I feel like I shouldn’t be doing that until I’ve explored my own backyard.”

They began their preparations at Gamache’s home, a hop farm in Yakima, Washington, outfitting Bredal’s 2010 Subaru Outback with a wooden bed frame in the trunk and cramming equipment in the rooftop cargo carrier.

“It’s always been a dream of mine to live in my car,” Bredal said.

They left to partake in a mountaineering course from the American Alpine Institute in Bellingham, Washington. The course’s two topics consisted of glacier travel and crevasse rescue, learning how to construct rope systems and self-arrest using ice axes in the case someone slips and falls down a hole in the snow or a 60-foot crevasse.

The first mountain they took on was Oregon’s tallest peak, Mount Hood. They were accompanied by fellow GU seniors Jake Bubb and Elliot Nye and took the classic route, which included a brief ice climbing section at a choke point above a 600-foot-deep and 20-foot-wide crevasse.

“I always feel pretty secure,” Bredal said.  “Otherwise, I wouldn't be doing it. I'm always nervous that something will happen to Amara. If I didn’t do something right and it’s our fault they got hurt.”

Next, they went back to Washington to climb Mount Rainier. With Bubb and Nye, they took the Disappointment Cleaver-Ingraham Glacier Direct route, the most popular, and did it without a guide.

“You get top fever,” Bredal said. “You’re willing to get to the top because you’ve worked so hard. I’m going to put one more foot forward.”

Having received the last permit for camping on Rainier, the group got the most undesirable campsite, the one with the lowest altitude. Others at the campsite began their ascent at around 11 p.m. They didn’t start until 3 a.m. While they were the last to make it to the top, they also probably had the fastest pace.

“You get up, and you’re like ‘yes, half way done,'” Gamache said. “Rainier is really cool because you can see Mount Hood and Mount Adams in the distance.”

After spending a few days in Spokane, Bredal and Gamache climbed Borah Peak in Idaho, likening its rigor to a steep hike.

Montana’s Granite Peak was next. The length of the trek is about 30 miles, and half of it is done at 11,500 feet of altitude. They camped at Froze to Death Plateau, a 2-by-6 mile large plateau filled with boulders and 1,000- foot cliffs — a beautiful landscape that resembles Ireland according to the pair.

A knife-edge ridge with snow, ice and 1,000-foot drops lead them to put their safety first and turn back.

Wildlife encounters were aplenty in Montana, with a marmot stealing their rope and a mountain goat hanging around their campsite for about 24 hours.

Their next stop was Boundary Peak in Nevada.

“That was a fun one, it's just another hike, a day trip,” Gamache said. “The crazy thing about when we were up there was there was a person that had gone missing the day before we got there. There were search and rescue helicopters circling around us and several people came up to us and asked if we had seen him.”

They reached the summit on the second day, and a search and rescue crew member near them received a call that the man had been found.

The tallest mountain in the lower 48, Mount Whitney in California was next on their list. Not having the permit attained through a lottery for this summit, they decided that the exorbitant fine rangers issue if they were found on the mountain during the night was not worth the risk and forwent the attempt.

After spending two weeks in their car, the two decided to check into a fancy Las Vegas five-star hotel for one night and walked around the Strip.

“It was so funny walking into that hotel, we both felt so grimey,” Gamache said. “We had dirt all over us and smelled like we had been living in a car.”

The pair picked up different books on their trip,  kept on accumulating more and more books from each stop, keeping them under the bed.

At the Grand Canyon, they skated a two-mile paved path along the edge of a crack and saw a plethora of elk.

After summiting Humphreys Peak in Arizona, they summited Wheeler Peak in New Mexico.

“New Mexico is beautiful,” Gamache said. “If someone just plopped me down in Taos Ski Valley and asked where in the United States I was, I would never in ten years have guessed New Mexico.”

Traveling North, they visited Denver and summited Mount Elbert in the Rocky Mountains.

“It’s just a hike, but it’s taller than Mount Rainier,” Bredal said. “There was no snow, it was so easy.”

After making the summit, they visited the Melanzana Outdoor Clothing store in Leadville, Colorado and made an appointment to buy their renowned hoodies. After spending a couple days in Boulder, the two made the two and a half hour drive to Leadville to pick the hoodies up, only to immediately drive back to Boulder.

The two dropped off a friend in Boulder then made the 11 hour drive that same night to Salt Lake City as Bredal had a half marathon the next day. While Gamache drove, Bredal slept in the trunk of the car. They arrived in Salt Lake at 3:45 a.m., 15 minutes before the half marathon bus was to depart.

At Utah’s highest point, Kings Peak, the two, who at this point had become consummate campers, forgot to bring propane for their stove.

“It was such a cool full circle moment for me,” Gamache said. “It was the most difficult one we did, and Granite [Peak], the one I couldn’t do, was really similar to Gannett. The whole time we were up there, there was a healthy fear of death, but at the same time, I never felt like I couldn’t do it.”

The last day, the pair walked over a marathon in distance, starting at 8 a.m. and finishing at 10 p.m.

“Amara did it in Chacos,” Bredal said.

The long trip included moments of disappointment and fear, like when they got a flat tire, constantly moving equipment in and out of the car, boredom from podcasts and music.

“It proved to the both of us how enduring we can be,” Gamache said.

The range of emotions the two experienced were vivid and profound.

“When we’re climbing, I always feel like this is the place I’m supposed to be,” Bredal said. “You’re so focused on the goal and you can’t think about anything else. You’re just present in a very beautiful and free place.”

Noah Wong is a staff writer.