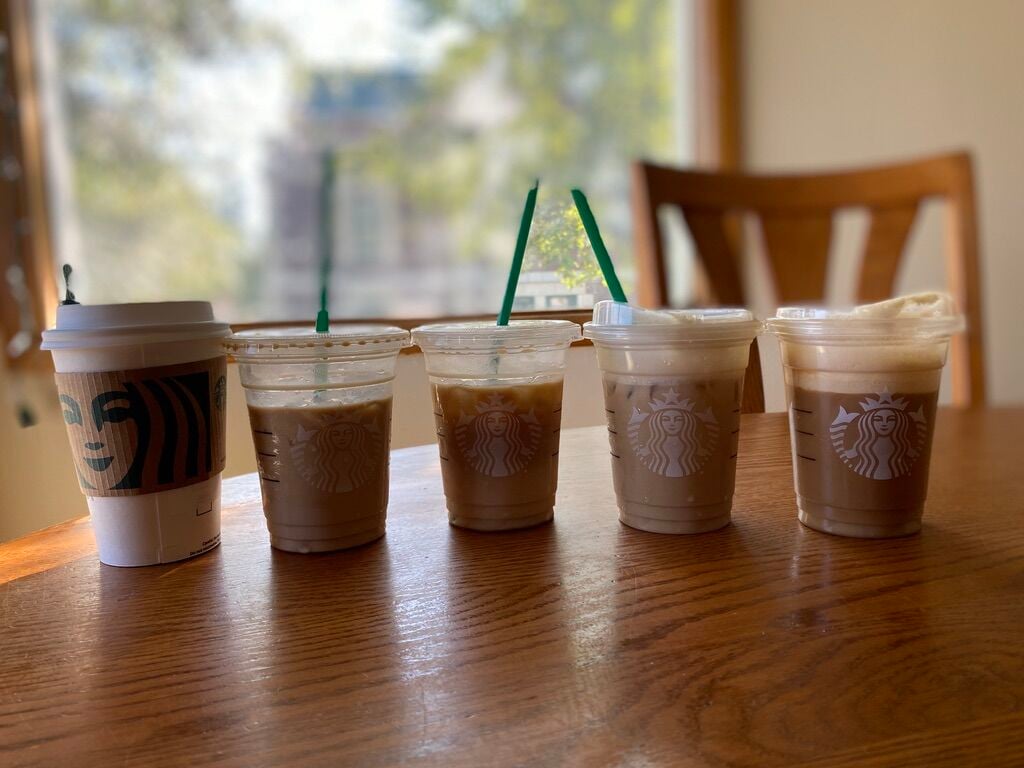 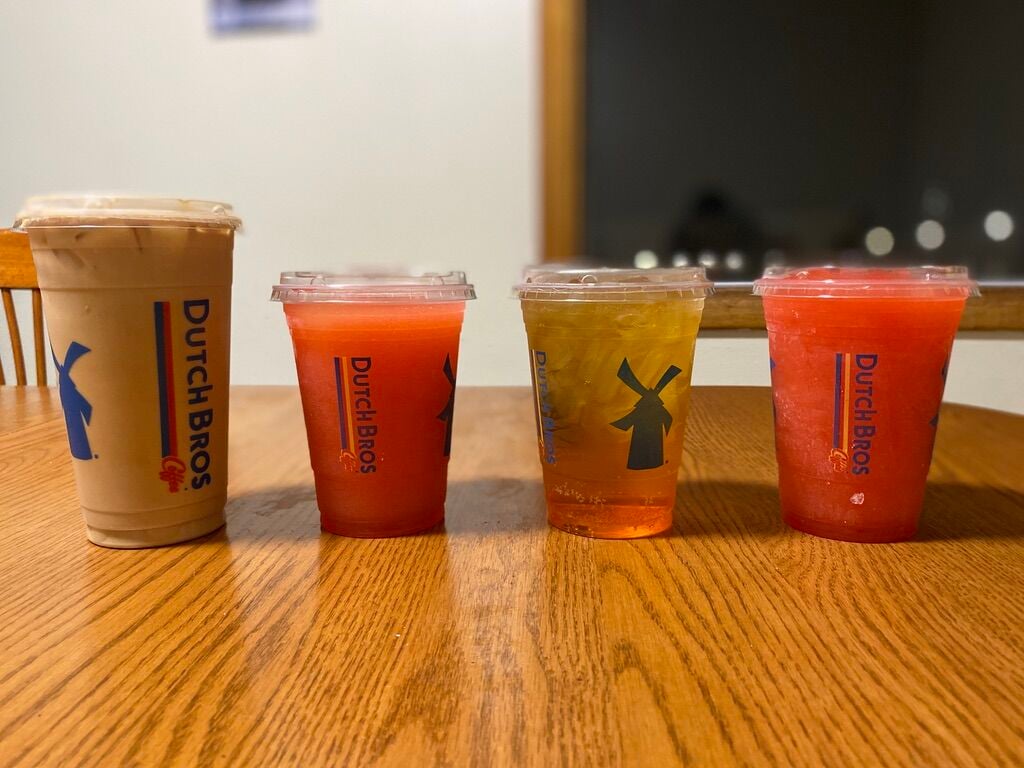 As school begins to move into the midsemester lull, some fellow Student Media employees and I ordered Zags’ ultra-specific coffee orders from Starbucks and Dutch Bros and gave our reviews over the course of one day to truly feel to shock waves of caffeine to our systems. We reviewed these drinks based on our personal tastes and rated them out of 10.

We started the drinking adventure with a lighter fall flavor to ease us in, the caramel apple spice per the recommendation of senior Erin Sellers. According to Starbucks, this drink is a steamed apple juice complemented with cinnamon syrup, whipped cream and a caramel sauce drizzle.

“It makes me feel all warm inside and like a kid! It feels very much like a fall too,” Sellers said.

Melina Benjamin, news editor: “It reminds me of a fall day in my childhood.” Score: 9 / 10

Spencer Brown, managing editor: “It tastes like fall which is nice, but it’s not sweet or anything. It’s very syrupy.” Score: 6.5 / 10

Emily Lovchik, student publication manager: “I like the sweetness of it, but the sweetness gives an apple-y bitterness. It falls in a cup.” Score: 9 / 10

Moving on to the second drink of the morning, we received a suggestion from the class of 2020 alum, Maddie Walters who states that her drink order “tastes relaxing but makes you wired.” Walters’ drink is a nitro cold brew with three pumps of hazelnut and sweet cream.

Benjamin: “It has a weird bitterness to it that makes the vanilla and hazelnut not blend well together.” 5/10

Brown: “It’s not bad at all but it’s really sweet, the drink tastes like a cold brew with too much syrup. There’s like a weird whisper of hazelnut if there was more or less it probably would taste better.” 6 / 10

The next drink is an interesting take on an iced coffee geared to a person with a sweet tooth. Valeria Vakiy orders a unique drink of iced coffee with vanilla sweet cream and four pumps of white mocha.

Benjamin: “It’s better than I thought it would be. It’s just way too sweet but there is still a hint of coffee. Crazy sweet.” 5/10

Lovchik: “Better than I expected, I will agree with Melina on that. Honestly, I just don’t like it. I don’t like the taste of white mocha. The sweetness is alright and you can still taste the coffee.” 5/10

Brown: “It’s thick, but not in the way that you want it to be. It’s like a thick sugary fog, if you can’t handle cold brew this is great for you. I don’t think I could drink a tall or a grande of this. I don’t like it in my mouth and I don’t want to do it again. Too white, like this campus.” 4.5/10

Yoch: “It reminds me of when you have too much Halloween candy as a kid and it makes your teeth hurt. The drink went straight to my molars and said that I’m going to get a cavity.” 2/10.

Moving on to Dutch Bros, we tested these drinks at 9:30 p.m. because we really wanted to be wired for the homework we had due the upcoming Monday and Dutch Bros is the known place to get a late-night coffee fix.

We began the night with an Iced 911, coffee with six added shots, per the recommendation of senior Salma Shairulla.

“During finals week. One sip will literally keep me up all night,” said Shairulla.

Benjamin: “This feels like I’m crunching on an espresso bean but I like it. I thought that the six espresso shots would be a little too much but I’m here for it.” 8/10.

Brown: “Smells like coffee. It feels like going home. I love 911 because I can chew the coffee, there is just so much coffee. She will get you wired but she gets you through what you need to do. My only critique is that she is watery when not blended. When you get it blended, it takes longer to drink but iced, you can drink right through. I could chug this.” 8/10

Yoch: “This is the type of coffee drink that you know going in that it’s coffee but it doesn’t go down tasting like coffee which very dangerous and terrible for my heart.” 9.5/10.

Dutch Bros is known for its fun rebel names and flavors, including the vampire slayer rebel (blended), a mix of pomegranate-strawberry and a Redbull. Caroline Sonnen makes this her staple Dutch Bros order.

Brown: “Here’s the problem: she’s great, she’s your friend with a great personality that just looks insane. Here’s the thing, the vampire slayer is the younger sister of the pomegranate rebel but is more mutated. It’s all right but doesn’t live sister’s expectations.” 3/10.

Yoch: “It has the same experience as eaten a Warhead candy. It feels like a weird burning sensation that would taste really good for someone who enjoys painful, sour candy. The strawberry flavor is this is too subtle that it just doesn’t work.” 3.5/10.

The final drink of the night came from inside Dutch Bros from Dutch Bros employee Ryan Meza, who has a unique combination for a rebel: an iced rebel with passion fruit and vanilla with peach drizzle, fondly known as “the Ryan.”

“The peach drizzle really makes the drink and it just kind of sounds fancy when you order it,” Meza said.

Benjamin: “I feel like I’m being transported to a peach farm in a cottage core fantasy with a golden retriever in toe, the sun is shining.” 9/10

Brown: “I don’t like this. What is this flavor? What am I putting in my mouth? No, no. There are too many tropical fruits that are fighting one another it’s fruit ninja in there. It tastes like a green tea that has been soiled.” 5.5/10

Yoch: “It tastes as if someone put the candy peach rings in a Mcdonald’s spirit overnight. It has the texture of a soda but the taste of a melted Popsicle or like an old Jolly Rancher left out in the sun too long.” 4/10

It appears that GU students tend to prefer sugary drinks more than anything, this may be due to the youthful sweet tooth of college students or the desire to mix a caffeine rush with a sugar one. Based on our reviews, that are completely subjective and hold no real value outside of this article, we believe the students’ Dutch suggestions were just slightly better than the Starbucks ones with a 6.35 rating over 5.82 respectively.

Major: Public Relations / Digital Marketing I really like the sound of my own voice, so I thought I would share.