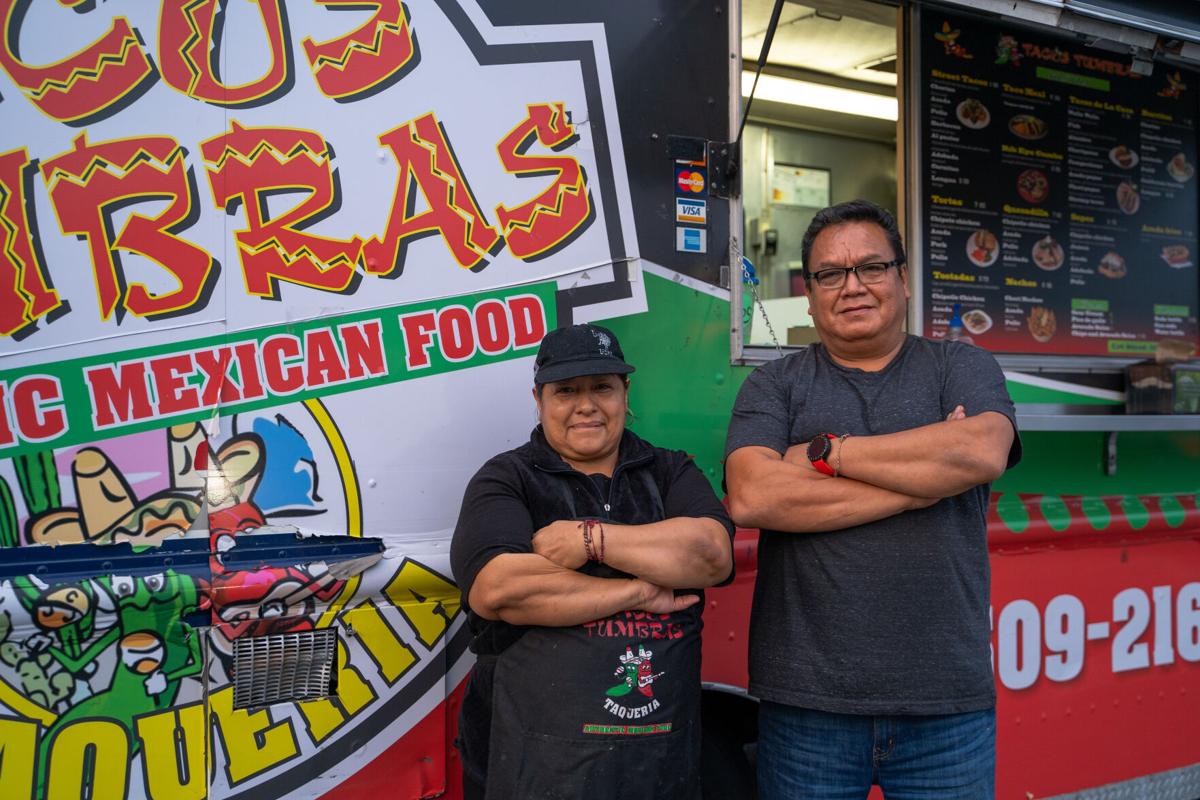 Carlos Zuniga pictured next to his wife and his iconic Tacos Tumbras truck. 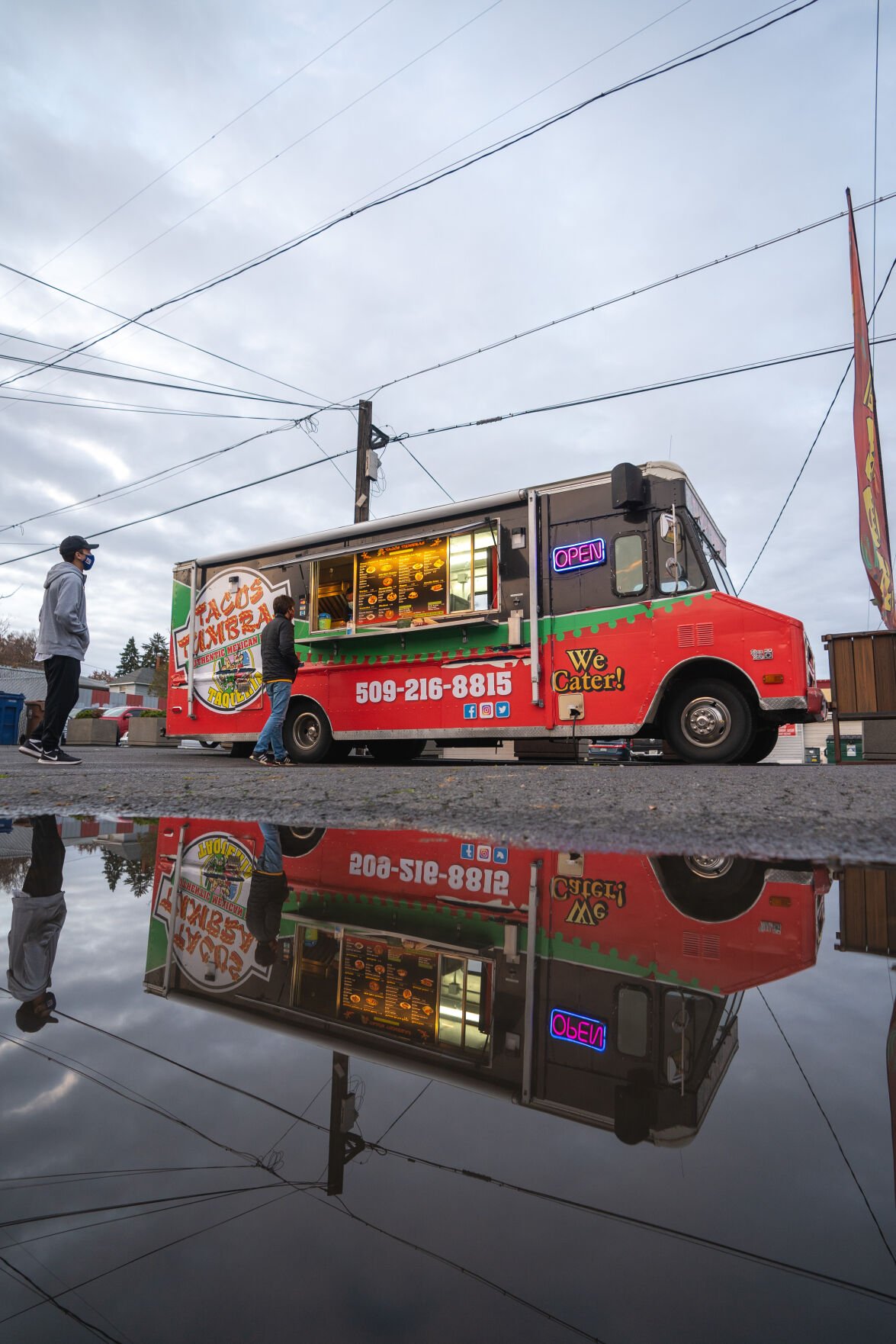 The Tacos Tumbras truck sits in the parking lot of 1311 N. Hamilton St. between Logan Tavern and The Star.

Carlos Zuniga pictured next to his wife and his iconic Tacos Tumbras truck.

The Tacos Tumbras truck sits in the parking lot of 1311 N. Hamilton St. between Logan Tavern and The Star.

As I step off my front porch on Sinto Avenue, I check my phone — Friday night, around 5 p.m. My stomach is growling and there’s one fix on my mind: a burrito from Tacos Tumbras.

1311 N. Hamilton St. is a small parking lot squeezed between Logan Tavern and The Star Restaurant & Lounge, two locations frequented by the Gonzaga students. Half of the 12 parking spaces are occupied by a food truck brightly adorned in red, green and black.

At home in California, it was common for my family to get Mexican food for dinner. The Bay Area offers a wide selection of quality Mexican food, a privilege I often took for granted. When I moved to Spokane in 2017, I quickly discovered myself in a bit of a ‘food desert’ — there were plenty of hamburger restaurants but I could never find a restaurant that served Mexican food that reminded me of home.

Tacos Tumbras’ diverse menu offers a comprehensive selection of Mexican fare that is unrivaled in Spokane. The meat selection includes staples like carne asada or pollo and rarer cuts like chorizo or tinga. The taco selection is equally as diverse.

Carlos Zuniga is the mastermind of Tacos Tumbras. His goal is simple: serve high quality Mexican food to anyone that visits the humble taco truck.

The story of Tacos Tumbras began in Dayton, Washington, a small farming town where the Zuniga family originally picked apples. “We were over there in the fields, picking apples and pears,” Zuniga said.

He recalls that customers always told him to move his business out of Dayton. “They would say, ‘there’s nothing like this in Spokane,” Zuniga said.

Fifteen years ago, the Zunigas moved to Spokane and never looked back. Tacos Tumbras was one of the first taco trucks in Spokane and quickly became an institution for the small Latinx community. Their influence was so great that many of Carlos’ former employees have started their own Mexican restaurants in the Spokane area.

“Like, six businesses, [the employees] worked for me before,” Carlos said. “They learned from me, and after that, they went on and opened their business.”

Lindsey Zuniga is married to one of Carlos’s sons. She met her husband 10 years ago, working at one of the family restaurants.

“Our whole family has been in the food and restaurant business for a long time, even when they were in Mexico,” Lindsey said.When the family moved to the United States, they brought their tradition of delicious Mexican food with them.

While other taco joints in Spokane might take lessons from the Zuniga family kitchen, Carlos still has a few tricks up his sleeve. Options like Tacos Campechanos or Tinga Burritos won’t be found at other restaurants in Spokane. After years of work, Carlos is using special family recipes to set himself apart from the pack.

While competition in the Mexican food scene in Spokane has increased, Carlos continues to find new ways to expand. Renovating old food trucks from wrecking yards is the best way to go.

“This is what I’m working on now,” he says, eagerly showing me pictures of an old food truck. He brought the truck cheap and plans to restore it to working condition.

Once workers can be found, the fourth Tacos Tumbras will be online, a second location for Spokane’s community. The family plans to locate the next truck downtown, near the Globe Bar and Kitchen.

Late-night business is the reason Tacos Tumbras is located near GU. Historic bars catering to Gonzaga students are a huge draw for business, and good relationships with a bar owner led to the current location on Hamilton. Carlos has a deep appreciation for his regular customers — many of whom attend GU.

Usually, Tacos Tumbras would stay open until 2 a.m. on weekends, serving patrons of Jack and Dan’s, The Star or Logan Tavern. However, Washington’s pandemic response mandates that alcohol sales stop at 11 p.m. — not late enough to justify taco service until the early morning.

While you may not be able to get a 2 a.m. burrito, you don’t have to be in Spokane to get quality Mexican food. Currently, the Zuniga family operates three taco trucks — two in Oregon (Hood River and The Dalles) in addition to Spokane. Carlos’ sons operate the trucks in Oregon — a true family business.

As the sun dips below the horizon, I dig into my plate of shrimp tacos. The tacos are sweet and light, complemented by a savory homemade salsa that completes each bite perfectly. As I watch traffic cruise along Hamilton Street, my eyes turn to admire the large mural facing Tacos Tumbras and try to name the GU men's basketball legends as they appear in the painting.

Upon close examination, though, faces emerge behind the businesses which frequently host GU students. The faces behind Tacos Tumbras are the Zuniga family. They’ve brought family to Spokane in the food they serve to people from all walks of life. This winter, Tacos Tumbras will be open every weekday from 11 a.m. to 8 p.m., serving delicious Mexican cuisine — straight from the Zuniga kitchen to the GU family.

Matthew Dobner is a staff  writer

Welcome To The 2021 Grammys Season

How are Spokane music venues surviving the pandemic? They aren't