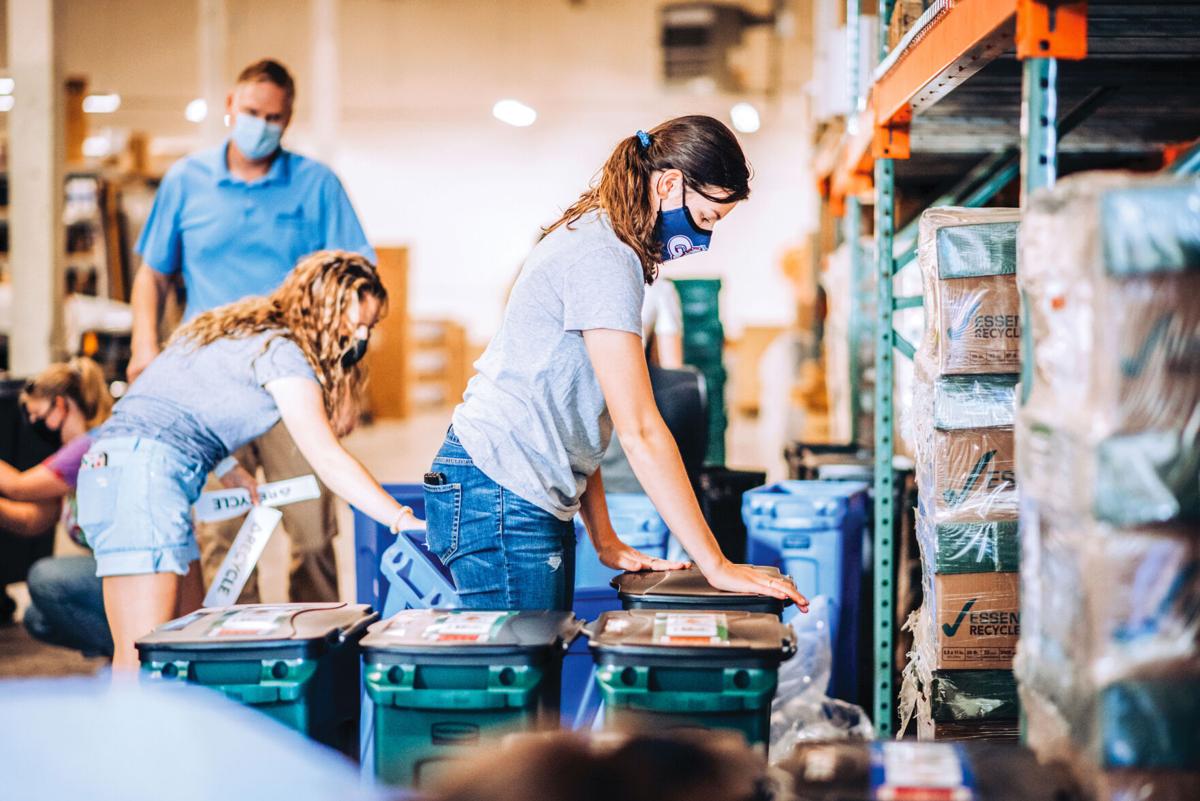 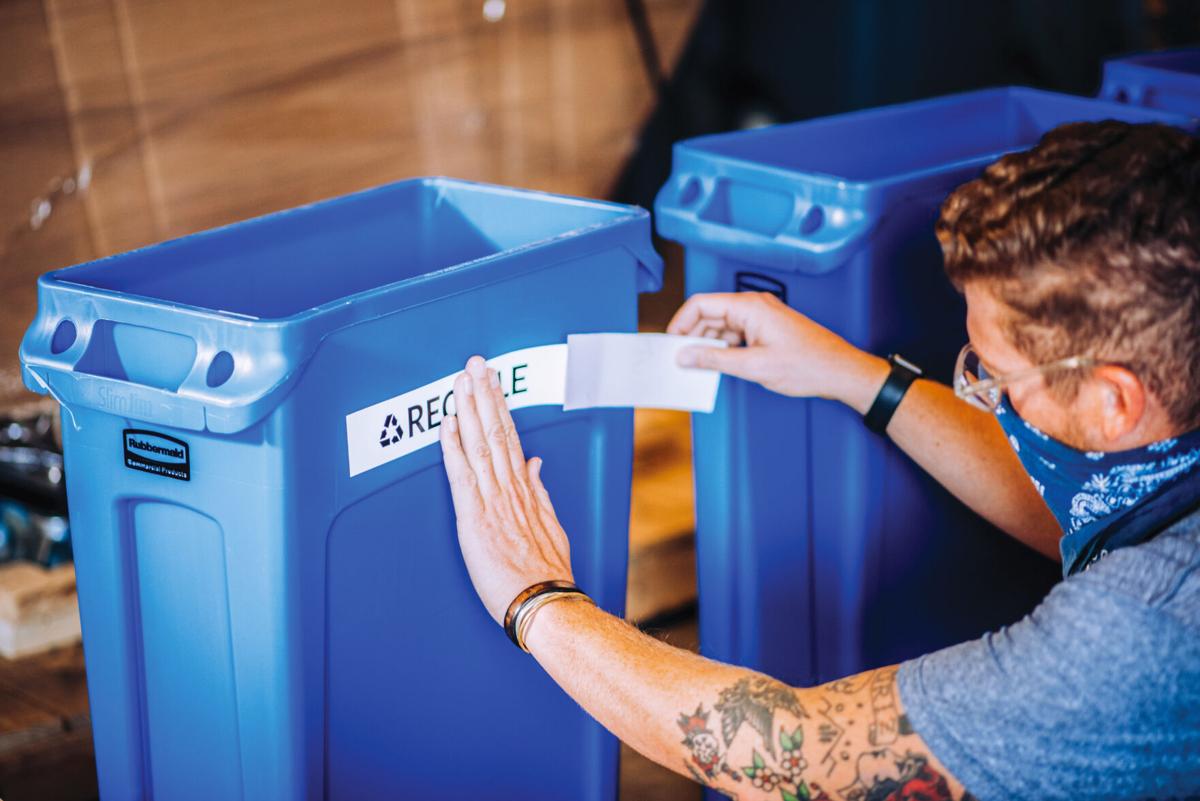 A new debut to Gonzaga’s campus was kickstarted last week. The Office of Sustainability in coordination with AmeriCorps and Plant and Construction Services has brought new waste bins and signage to campus in an effort to make GU more sustainable and environmentally friendly.

The collaborative project was originally started last school year, in the spring 2019, but unfortunately with COVID-19 cutting the semester short, the project had to be put on hold. Kathryn Graham, the higher education waste reduction coordinator, worked with the Office of Sustainability to get the project off the ground and running as soon as the fall semester began.

Last week Graham worked alongside student volunteers to assemble and label bins, so in the next few weeks they would be ready to be placed around campus.

“It’s been super inspiring knowing there are students who care so much about reducing waste and improving our overall footprint on campus,” Graham said via email. “It makes my job more fulfilling knowing I can be a resource and instrument for them to reach their own personal waste goals and projects.”

About 11 people participated on the day of assembly, along with Tomson Spink, grounds manager for Plant Services, and Jim Simon, director of sustainability at GU, who were in charge of constructing and labeling bins prior to student arrival.

“Because the majority of the volunteers were involved in some realm of sustainability on campus, there was a collective energy and motivation towards the greater purpose of the bins, despite the slightly tedious process of putting them together,” Graham said.

Graham has worked alongside Spink, as well as Edin Jusic, custodial manager for Plant Services, and Greg McGuire, the operations manager of the John J. Hemmingson Center. Their job has been to create a layout for placement of bins on campus, as well as set a goal date for the roll-out of the bins, which has been set for Oct. 24.

“This date is when we are aiming to have everything planned and set in place to get the bins into most of the major academic buildings on campus, such as Hemmingson, College Hall, Foley Library, Jepson, Herak and Hughes,” Graham said.

“This process is going to be happening throughout the semester and year and will be reliant upon all the moving parts, as well as student participation, to construct and place bins as they come in,” Graham said.

With a project as widespread and intensive as this one, all hands on deck are needed. While it may be a lot of manual labor and planning upfront, the  new project will have tangible impacts on GU’s carbon footprint.

“The hope is that through these bins, the marketing campaign and other education, we will see actual differences in the amount of waste we produce on campus, our contamination and how much waste we can divert from landfills with regular waste audits and proper composting and recycling patterns,” Graham said.

GU senior Mikaela Schlesinger is the president of the Gonzaga Environmental Organization, GEO, and is one of Rethink Waste’s committee leaders. She and some members of GEO were student volunteers who helped assemble the new waste organizational system on campus last week.

GEO is the largest student run environmental club on campus and they work with GU and students on various projects and events throughout the year. They are also heavily involved in the greater Spokane community. With GEO being as large a club as it is, it is broken into five sub committees, one of them being the “Rethink Waste” committee co-run by Schlesinger.

“I have high hopes for this project,” Schlesinger said via email. “One of the greatest problems with waste management is the confusion on what goes where, as it’s very different for each municipality. The goal of this project is to decrease confusion by having very clear waste signage of common items found on campus, and where to put them.”

Schlesinger said the club’s goals go hand in hand with the new waste system goals of creating a greener environment on campus, getting students involved in the process and getting the word out about ways to actively help make your community more environmentally friendly.

“I hope that more people educate themselves on [climate] issues and continue to push for more sustainable system changes as well as realize how their carbon footprint affects others,” Schlesinger said.

Much like Schlesinger and GEO, Graham urges all Zags to use this project as a jumping off point for getting involved in the bettering of GU’s waste system, and for using these new tools given to them to make campus a healthier place for all who call it home.

“No one can be a perfect consumer, especially in the world we live in, and oftentimes people don’t have the privilege to make those ‘conscious’ decisions,” Graham said. “However, the best thing you can do is educate yourself, your peers and your family, and that is exactly what we are hoping to do."

Major: Public Relations I love working alongside such a supportive and talented group of people, and creating a fun little community within the larger GU community. It’s a fun place to grow as a writer and as a person and get out of your comfort zone!

How nice is too nice?: When Zags Help Zags culture goes too far

Where the money's going: A look into Gonzaga's COVID-19 budget

Election 101: What to know and how Gonzaga students can prepare