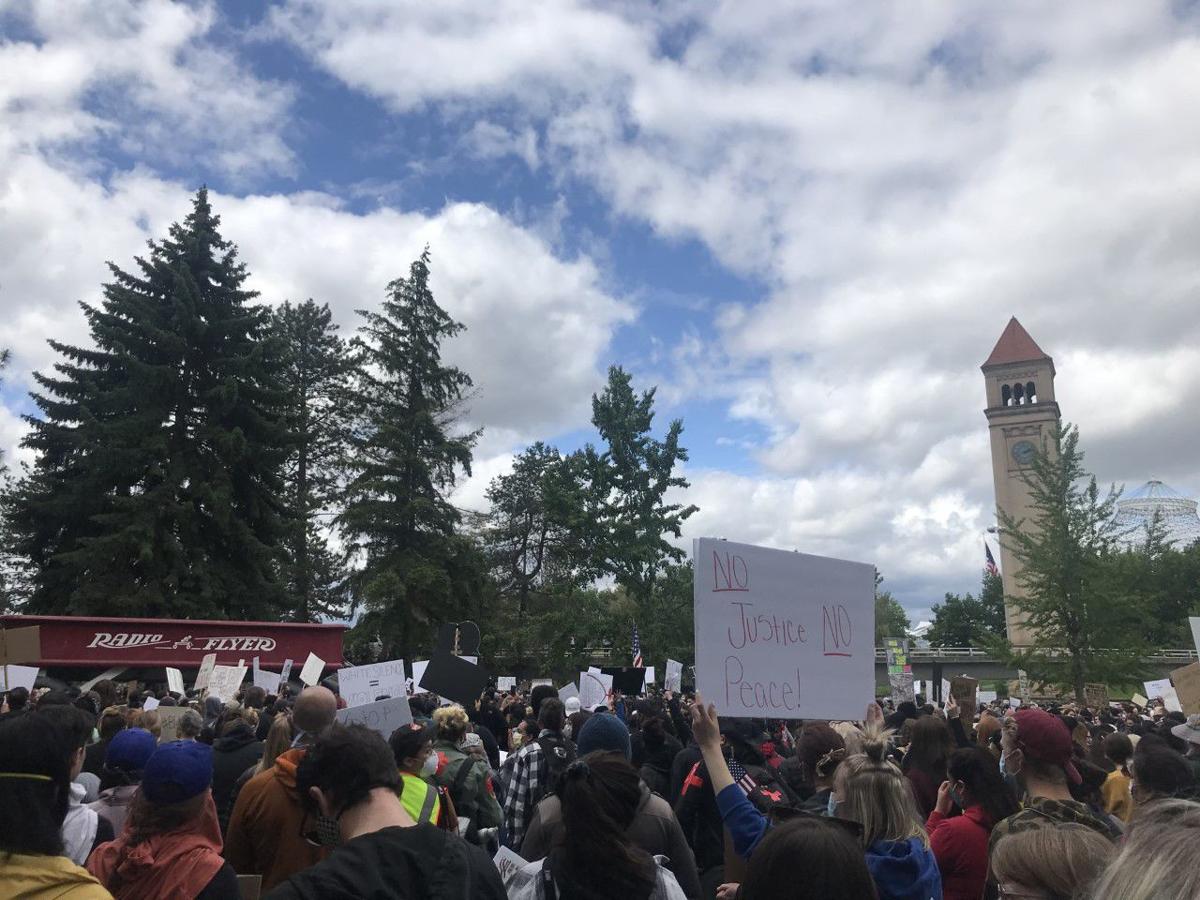 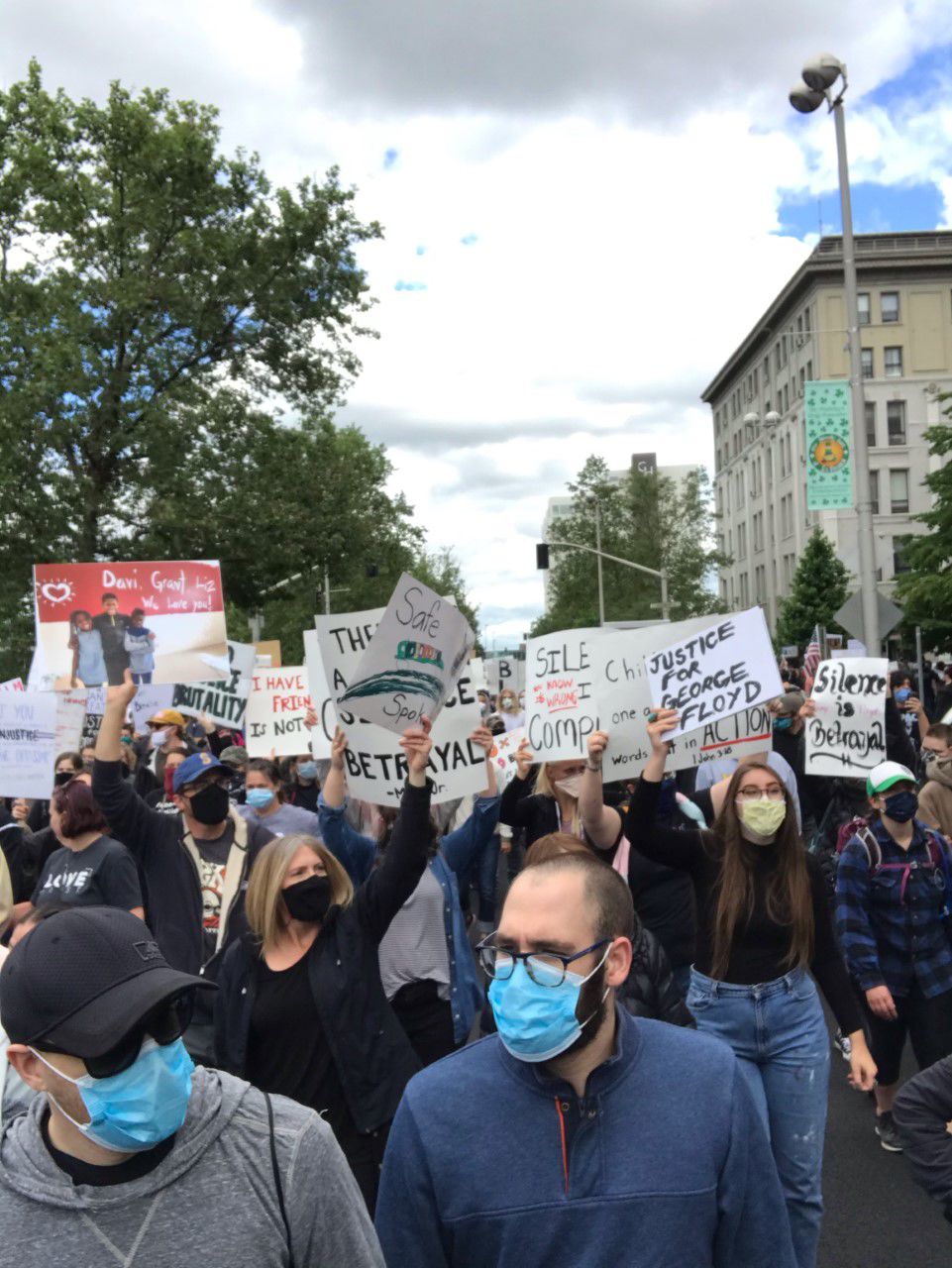 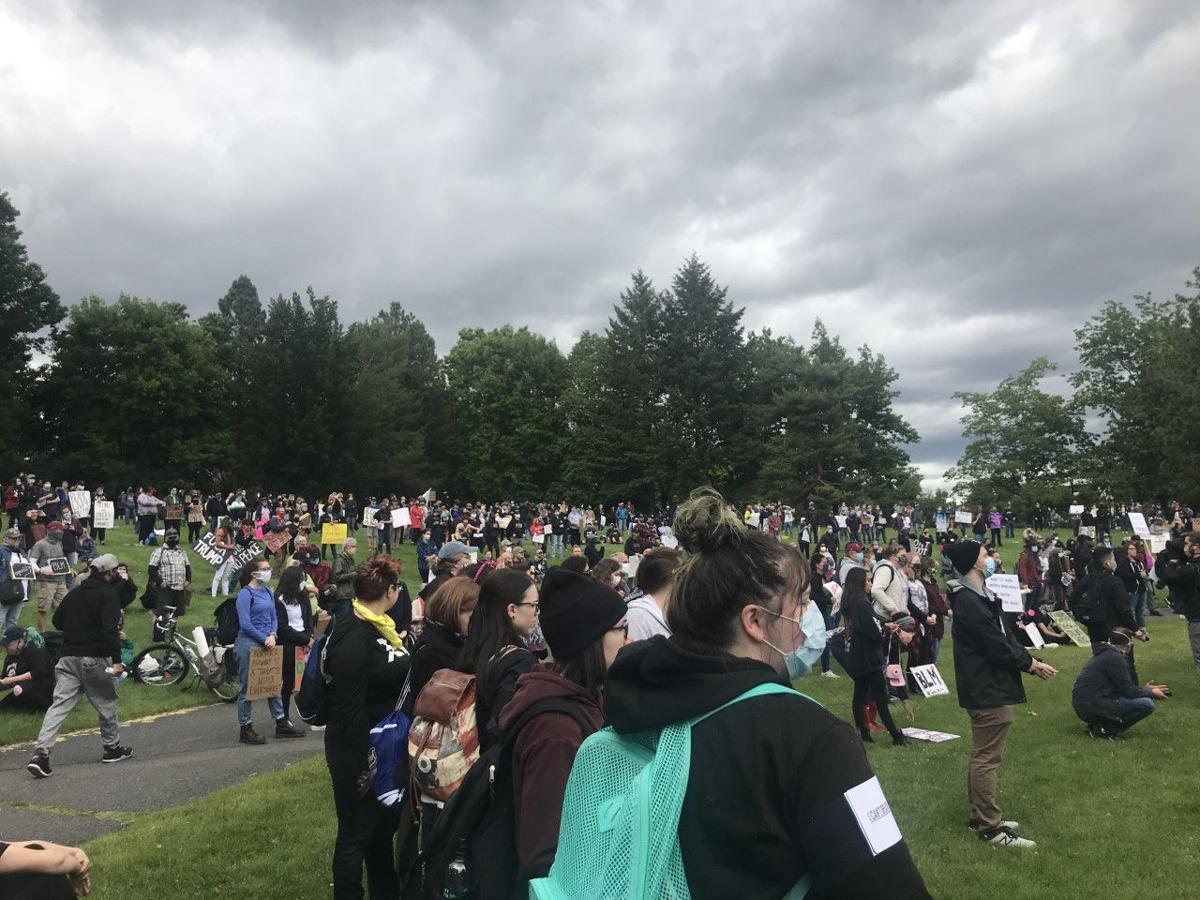 Eight minutes and 46 seconds – that is how long George Floyd, age 46, was pinned to the ground by Minneapolis police officer Derek Chauvin before dying on May 25.

Video footage shows that Chauvin did not remove his knee from Floyd’s neck even after he lost consciousness.

The video of his death has been viewed by millions worldwide.

Protests began in Minneapolis on May 26 and continued to spread across the nation by May 27. They have now taken place in all 50 states in the U.S. and have lasted for two weeks.

Several Gonzaga University students have participated in the protests following the death of Floyd.

“I have participated in protests over the past eight days," Delina Biniam, a rising senior at GU, said. "I went to one of the first ones in Portland on May 29, where we marched from Peninsula Park to the Justice Center, and I went to another one on June 3 in Happy Valley, Oregon, which has been my home for the past 10 years.”

Biniam said she believes protesting shows a different level of dedication for the cause.

“Protesting shows unity amongst a wide variety of individuals who all believe the same thing: that Black lives matter," Biniam said.

Biniam said protesting with thousands of other individuals who have assured her that her life matters, has been her silver lining for the past week.

“I've been protesting because I am sick and tired of all the injustices the Black community has been receiving for decades," Biniam said. "I protest because I want a better future for the next generation of Black men and women…a future where we do not have to worry about our fathers, brothers, mothers and sisters not coming back home when they leave the house. I protest so that I do not have to live in fear in my own home."

Biniam said she has friends who have been tear gassed and shot with rubber bullets who were peacefully protesting.

"I have friends who have been tear gassed and shot with rubber bullets just for refusing to stand up and leave the area. I have seen videos of the police pulling people from cars and tear gassing children all because they are fighting against Black oppression," she said.

Actions like these by the police have made Biniam fear the police more than she had before.

“[Police brutality] has made me question if [the police] are even open to change," Biniam said. "However, I think the most inspiring thing is the fact that the entire world is basically supporting the movement. I have seen protests in England, Paris, Tokyo and so many more cities across the world who are advocating for Black lives and the end of police brutality. It has given me more hope in the fact that change is possible.”

In Spokane, senior Alea Chatman said the protest she took part in on June 7, began at the Lilac Bowl in Riverfront Park, it went across the Monroe Bridge and circled back to the Lilac Bowl.

Chatman said the speeches at the protests she has attended have been amazing.

“They emphasized the importance of love and life and basic human rights," Chatman said. "They were an outlet for people of color to speak out about the adversities they face. This was beautiful to watch since, much of the time, their cries go unheard.”

Chatman said she thinks COVID-19 is just another example of how Black Americans remain underprivileged. “The death rate is a symptom of systematic oppression,” she said.

In regards to any opposing protesters, Chatman said she was unimpressed by the number of people.

“I was pleasantly surprised by the lack of counterprotest I witnessed. For the number of threats received by the organizing groups, I was expecting more agitation,” Chatman said.

Mikayla Heiser, a rising sophomore at GU, said she has participated in one rally so far in her hometown of Billings, Montana.

“I went because I live in a small, nondiverse town and it felt as though voicing my concern of police brutality and calling for justice was necessary," Heiser said. "I was surprised to see almost 40 people alongside me in front of our police station for a peaceful protest."

“Older couples would drive by [during the protests] and shake their heads [at protesters] while younger residents would stop and flip us off or yell slurs,” Heiser said. “There was only one incident that caused a man protesting with us to throw water at the truck yelling slurs and flipping us off. Everyone told the young man to stop and the car drove off. Thankfully no more occurrences like that continued on.”

Heiser said since she has been given the opportunity to use her voice and be heard, she will make sure she is.

“It's scary to know there are sick people out there who want to hurt us, but no I will never be silent because of my fears,” Heiser said.

“For those unable to attend rallies make sure to have these conversations with friends and family and also to make a presence online," Heiser said. "Sharing links for sites that give information such as petitions to sign, ways to donate and educational purposes are super important."

Union Carter, a rising sophomore, has participated in several protests over the past few weeks in the Seattle area.

“I’ve always been a supporter of the Black Lives Matter movement and this was a chance for me to exercise my constitutional right to protest,” Carter said. “This was a way for me to further show my support for the movement as a whole and encourage others to join me in fighting for meaningful change in the name of Black Americans and other people of color.”

Carter said she never protests by herself and has attended with her sister or one of her friends.

“I would never go to a protest alone because of the uncertainty of how it is going to end," Carter said. "Some begin and end peacefully, and others not so much. In addition to that, being a young woman protesting in a big city, there are other dangers such as human trafficking."

The most alarming thing Carter said she witnessed was the use of a citywide curfew to silence and disburse protests.

“I was in Seattle with my older sister and at this point we had been walking around the city for a couple of hours and were on our way back to Westlake Center when things started to get a little rowdy,” Carter said.

“A police car had been caught on fire and people started to run away because the fire engulfed the car and soon it would reach the gas tank. After watching this we decided it was time to leave and started walking back to the light rail station,” she said.

Shortly after, Carter said she received an emergency notification on her phone saying that a curfew had been put in place.

“I cannot imagine how the situation would have escalated with the people who were still protesting. In my opinion, the curfew was an excuse to start arresting people who had come to peacefully protest police brutality,” Carter said.

Despite this, Carter said the protests reinforce that she is not alone.

“Seeing the outpour of support for the Black Lives Matter movement has just been inspiring,” she said.

Carter said for those who cannot participate in physical protests, there are other ways to be an ally.

“The most important thing anybody can do is educate themselves and the people around them," Carter said. "Conversations about racism and privilege can be uncomfortable but are necessary to understand others and their struggles. Acknowledging your own privilege is one of the first steps to becoming a genuine ally.”

Carter said it is also important to vote.

“It would be awful if we made it this far only to have nothing change," Carter said. "If it’s not written down in the law books than it can’t be enforced in the future."

Karlie Murphy is the copy editor.

Gonzaga president announces plan to return to campus in the fall

Gonzaga president addresses the presence of police on campus