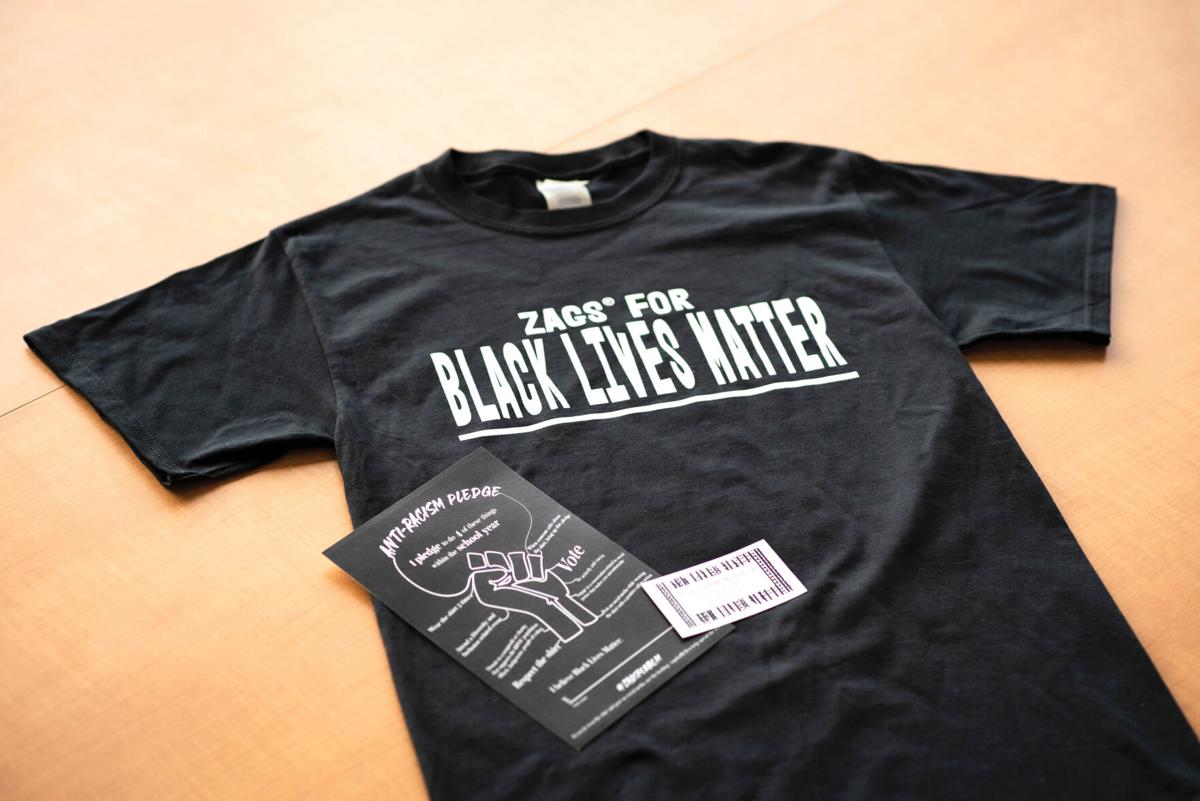 BLM shirts have already been sold out as the GU community responds to the attack on the BSU. 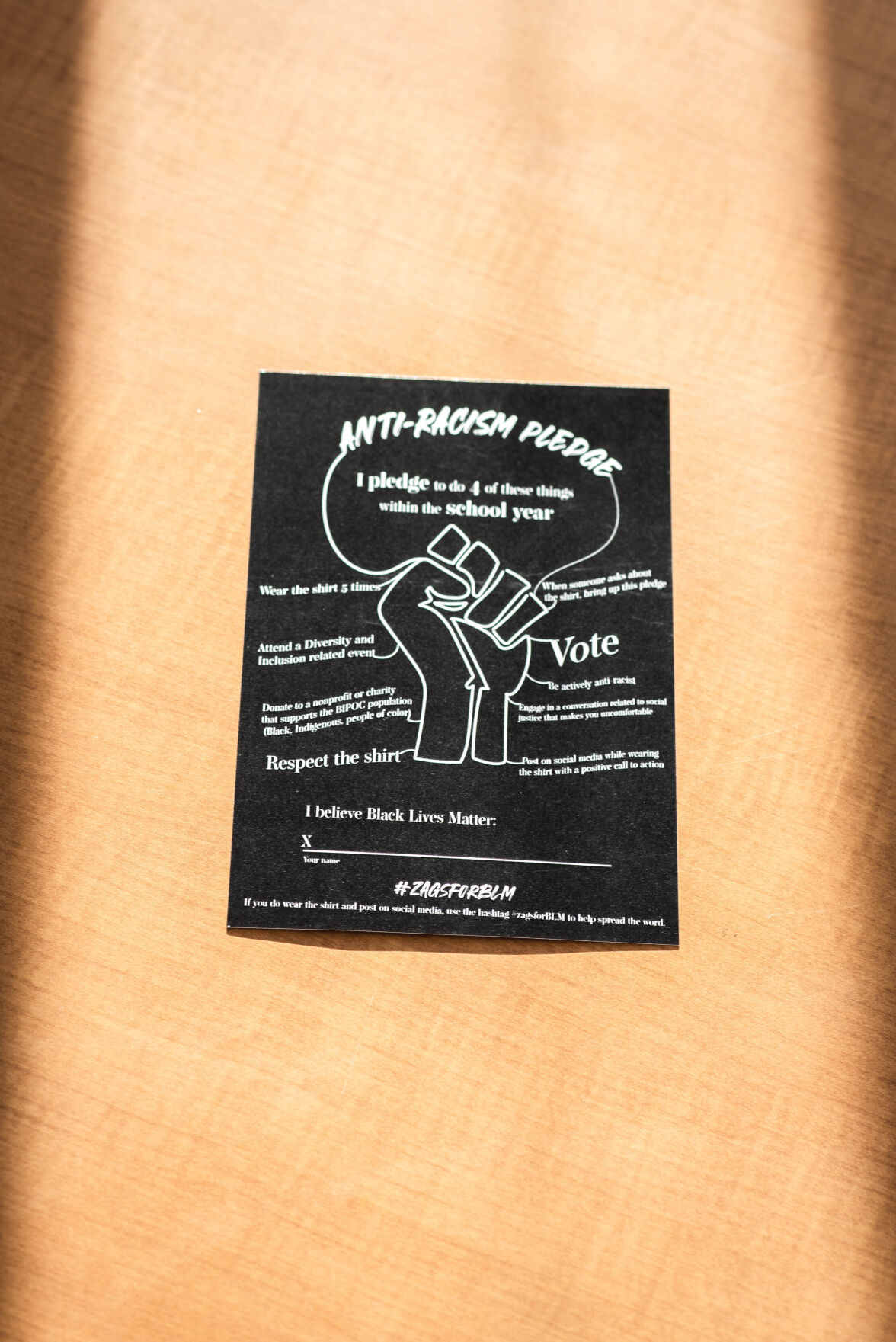 GSBA and BSU are also offering pledge cards for GU students to pick up to show a commitment against racism on-campus.

BLM shirts have already been sold out as the GU community responds to the attack on the BSU.

GSBA and BSU are also offering pledge cards for GU students to pick up to show a commitment against racism on-campus.

In response to calls for justice and inclusion of Black citizens, new “Black Lives Matter” shirts, a project jump-started by Haley Wilson, director of diversity and inclusion for Gonzaga Student Body Association (GSBA), are bringing the spirit of justice and open conversation to Gonzaga.

With momentum for the project coming from solidarity for the Black community generated by the recent attack against GU’s Black Student Union (BSU), the shirts have already sold out.

Wilson said the idea for the shirts came from her time as a Starbucks intern.

“[Starbucks] produced a Black-partnered network T-Shirt that said ‘Black Lives Matter’ on it, and then actually produced over 250,000 shirts,” Wilson said. “They gave them for free and distributed them and shipped them to all of their [in-store and corporate] employees. As an intern, I got sent a shirt.”

Regarding her experience as an intern with Starbucks, Wilson said that it was very important to her that the GU trademark be applied to the shirts.

“The thing I wanted to be clear was that it was a branded Gonzaga shirt to show that Gonzaga approved and supported this project,” Wilson said. “I thought it was huge, that it wasn’t just us as students creating this thing, it’s Gonzaga that’s moving beyond just a written email statement, [that] we’re doing something active and intentional.”

In addition to the shirts, GSBA and BSU are also offering pledge cards that are to help make the shirts less of a performative decoration and more of an active commitment against racism on campus.

“The intent behind the pledge card was to make sure that the shirt wasn’t just used as a joke,” said Jackie Gaither, vice president of BSU. “The pledge card consists of [pledges] like, ‘I’ll wear [the BLM shirt] five times this semester or, ‘I will take a picture with [the BLM shirt],’ or, ‘[I will] volunteer with a program’.”

Gaither said she didn’t want the shirts to be taken lightly, due to both the seriousness and the intentionality BSU put into the project.

Also contributing to the project is GSBA President Fese Elango, who is serving in an administrative role by connecting BSU and Wilson to individuals who could better market and support the project.

“In this role, [my job is to] look at the different donation sides, and [to] coordinate between BSU and GSBA,” Elango said.

The reaction to the project has been overwhelmingly positive, with the shirts selling out in less than eight days.

With the shirts being $2 it was affordable for many students and community members to buy them.

"We wanted to reduce barriers to getting the shirt but it didn’t feel appropriate to give them for free (the price in part disincentivizes people from defacing the shirt along with the pledge card which does the same)," Wilson said in an email.

To make the price point this low GSBA looked to departments, organizations and deans to donate to the cost. GSBA also paid for a portion of the total cost as well.

By getting the donations and making the shirts $2 GSBA will be able to donate all the profits form the shirts.

“A lot of my family, [people at] my mom’s work, friends, everybody wants this shirt,” Gaither said. “I think [the shirts are] something that’s building a community, and that’s what I like about [the project] so much.”

Speaking to the shirts’ reception, Elango referenced the spirit of the GU community following the recent BSU attack.

“I think it’s been really uplifting and inspiring to see folks rally behind the Black community,” Elango said. “I think that’s the essence of this shirt. It’s more than just a shirt, and it’s more than just a thing you sign, but it’s a way that you should navigate your existence as a member of  the community, and that’s been something that has been really exciting to see people rally behind.”

The design of the shirt is also generating excitement, taking its “roots” from rapper Megan Thee Stallion.

“Josh and I worked together and collaborated on the design,” Gaither said, referring to her role in the shirt’s design. “We were basically inspired by Megan Thee Stallion’s SNL Performance there’s ‘protect black women’ in the background. Josh and I had the idea of ‘protect’, which is something Gonzaga [has] in its mission statement.”

“Silence is an answer,” Gaither said, urging students to speak out for their Black fellow Zags.

“If you’re being very absent in this whole thing, if you’re not just speaking up because it’s not affecting you, then that’s an answer," Gaither said.

In the months to come, continuing to remember this is encouraged.

“This is a reminder that says ‘Next week, two weeks [from now], you can’t just forget about it, because our Black students are not going to,” Wilson said.

Wilson's message pushes for students to know and understand their privilege.

“What’s really important to note for our non-Black students at Gonzaga is that this is a moment where you are getting a little sliver — the tiniest sliver — of what it’s like to be Black on our campus, and you may have ignored that prior to this moment.”

Part of this privilege is being able to feel comfortable being GU's campus.

The shirts are available to be picked up in the John J. Hemmingson Center from Monday, Nov. 16 to Tuesday Nov. 24.

'Fulbrighters' put GU mission into practice around the world

To Zoom and or to go in person: Zags consider changes in learning