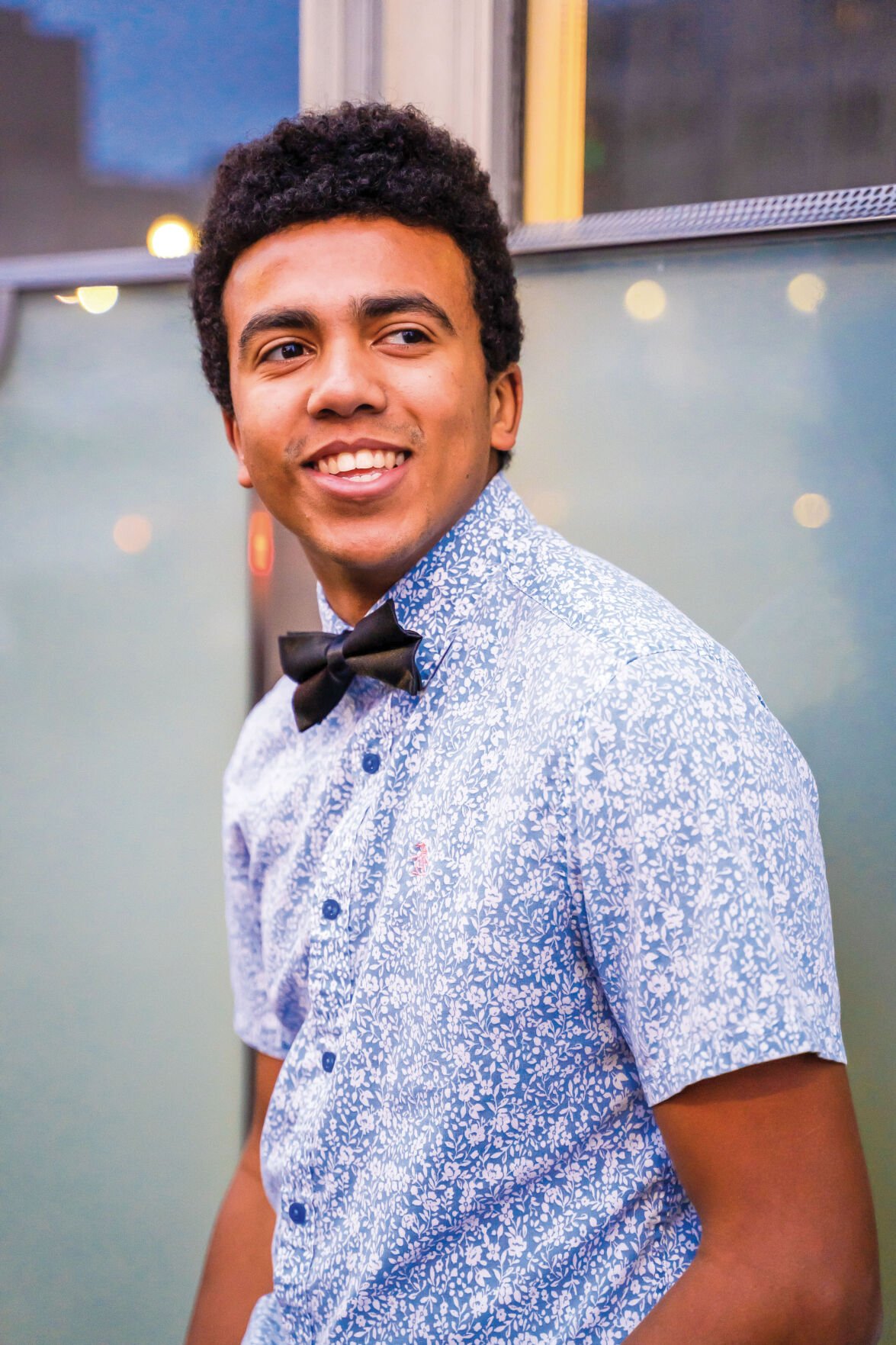 Larson was chosen from over 550 submissions statewide for his photo "BLACK LIVES MATTER." 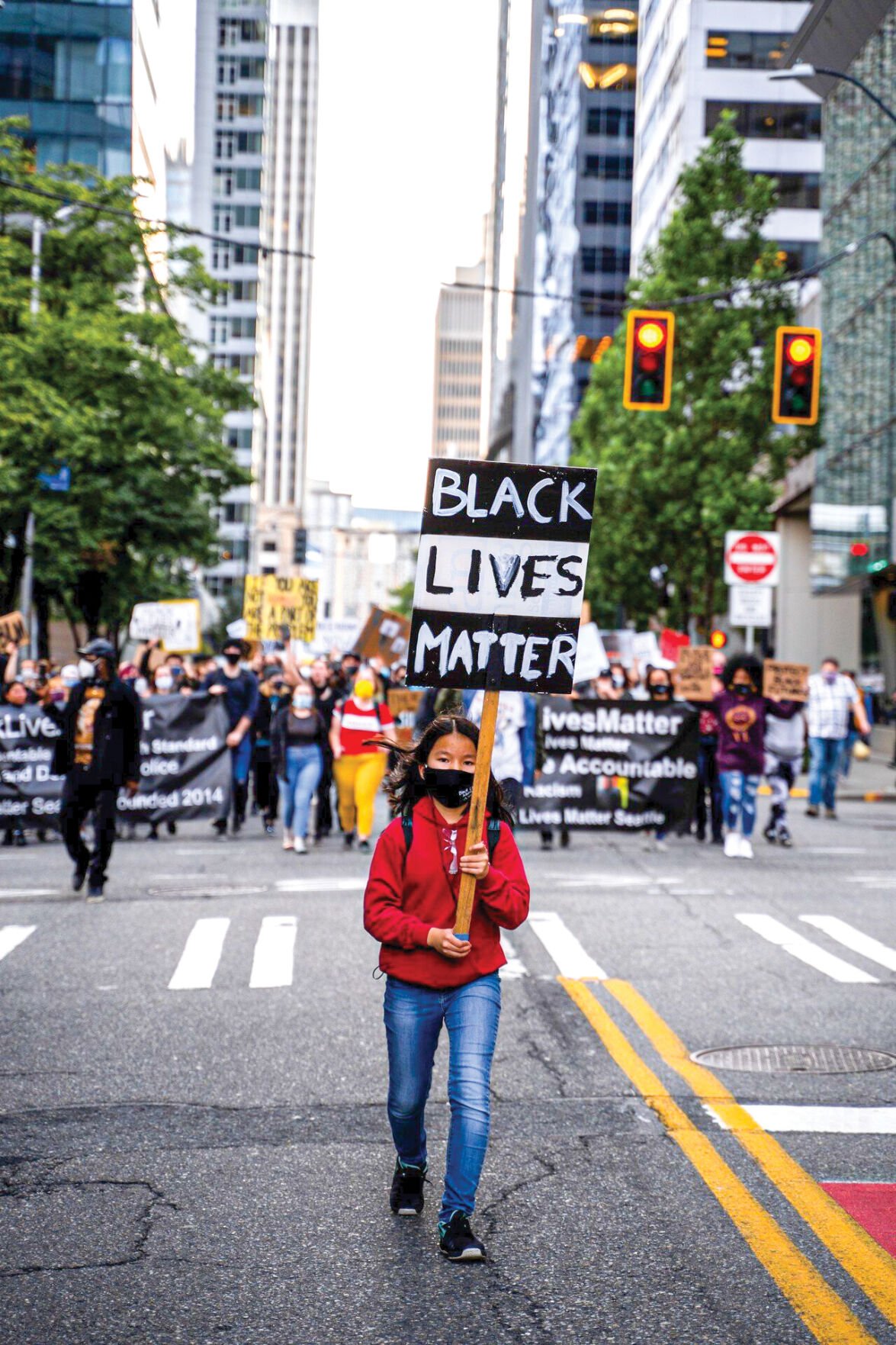 Larson's photo, "BLACK LIVES MATTER" (above), will be featured in the CVG Art Festival and features a young girl leading a protest.

Larson was chosen from over 550 submissions statewide for his photo "BLACK LIVES MATTER."

Larson's photo, "BLACK LIVES MATTER" (above), will be featured in the CVG Art Festival and features a young girl leading a protest.

While studying for finals at one of his favorite study spots in Jundt, a flyer caught Michael Larson’s eye in the fall semester. One specific moment he had experienced at a Black Lives Matter (BLM) protest last summer came to mind.

This January, the senior was selected to include his photo “BLACK LIVES MATTER” as one of the 130 artworks showcased in the annual CVG Art Festival in Bremerton's Collective Visions Gallery. The show had over 550 submissions and is considered one of the most prestigious statewide art shows in the Pacific Northwest.

“Every hour or so I would take a break and look around at the posters on the wall and the flyers on the bulletin board and I kept seeing CVG Art Festival,” Larson said. “One day I was bored and typed it into Google and found the webpage that said they were now accepting submissions. I just instantly thought of the Black Lives Matter photo.”

Larson said before taking a chance with his photo in the CVG Art Festival, participating in art competitions had never crossed his mind. In January, a few weeks after Larson’s submission, he was contacted by the festival with news that his photo had been accepted.

The photo Larson submitted, titled “BLACK LIVES MATTER,” was captured at a BLM protest held in downtown Seattle last summer. Larson participated in the protest with his friend and fellow Gonzaga student Liam Collins. He said he documented moments in other BLM protests, but was not expecting the touching moment he was able to photograph that day.

“We had gone not really knowing what to expect for ourselves being at the front,” Larson said. “We were just chanting and walking through the streets and then we saw this girl who was leading the front of the pack. It was really powerful.”

Larson said he was so moved by the young girl’s activism that he ran to the front of the protest to film and capture photos of the moment. As Larson worked his camera, Collins spotted behind as he made his backward stride, ensuring he didn’t trip while photographing.

“I just know that Michael’s heart was behind it all,” Collins said. “He really wanted to make sure to get photos to be able to show people what it was like, and, so he ran through the crowd and took some pretty awesome pictures.”

Within a 10-second period, Larson said he took about 15 pictures of the young girl. After observing and editing his photos, he found the picture of the girl, printed the image and hung it in his house.

“In the context of this year on Earth in 2020 and everything that happened and how the Black Lives Matter movement was not just in the U.S., but all over the world, I thought it would be a really special piece to submit,” Larson said.

Recently, Larson took a trip from Spokane to Bremerton to drop off a 20-by-30-inch print of his photo to the gallery. “BLACK LIVES MATTER” will be located at the gallery for viewing until Feb. 23 and on the CVG Art Festival’s website, where all accepted submissions are available to view virtually.

Although Larson chose a photo as his CVG Art Festival submission, he said that his photography has become more of a hobby, while videography is what developed into a huge passion of his.

“Documentary film making, raising awareness of issues that need to be talked about and starting conversation in that way, that’s where my artistic passions have come from,” Larson said.

Beyond his CVG Art Festival submission, Larson has worked on multiple documentary projects here at GU, covering topics such as toxic masculinity and stories of underrepresented GU students and faculty members. He said that this particular photo stands out in comparison to past projects he has worked on.

“It’s this girl leading this march of thousands of people protesting and raising awareness of police brutality and validating that Black lives do matter,” Larson said. “It was a powerful photo and honestly one of my favorite pictures I’ve ever taken.”

Kevin Smith, friend and roommate of Larson, said entering the CVG Show has opened Larson’s eyes to a reachable career path as a photographer and videographer.

“His talent is already there, all it takes is the courage to submit and share your creations just as he did last weekend,” Smith said.

Smith said he hopes Larson’s art submission will inspire other talented Zags to take a chance when opportunities arise, just as Larson did.

“There are plenty of talented Zags out there with beautiful works of art, and I hope this photo allows them to see that,” Smith said.

Collins said that for those within the GU community, taking a moment to view Larson’s photo and reflect on the context and message it portrays is valuable.

“Me, myself, when I look at it, it gives me chills,” Collins said. “Realizing what is going on and that there are little girls leading crowds for serious things that are going on in the world, it puts a lot of things into perspective.”

Larson said he would have never thought to submit his art to the CVG Art Festival if it wasn’t for the flyer he found while studying in Jundt.

“I just want to thank whoever put that flyer up,” Larson said. “I’m sure it was an art professor in the Jundt Museum, but I just want to send a personal thank you to them.”

Major: Public Relations I love meeting and having conversations with fellow Zags through my writing!

CHAS Health will be distributing vaccines at GU for its patients

Gonzaga weathers a budget storm during the COVID-19 pandemic

Zags become aware of burglary occurrences in the Logan Neighborhood