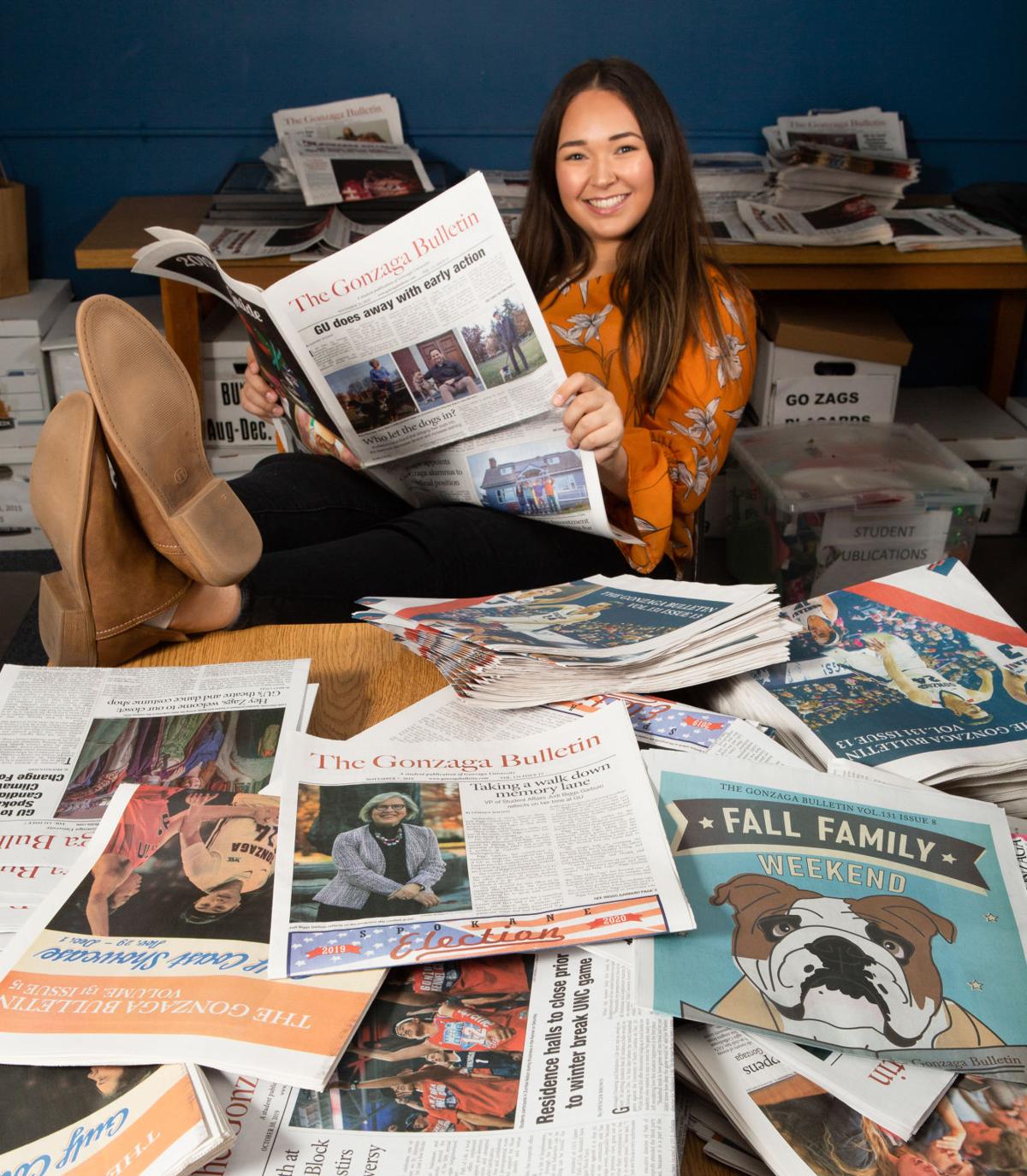 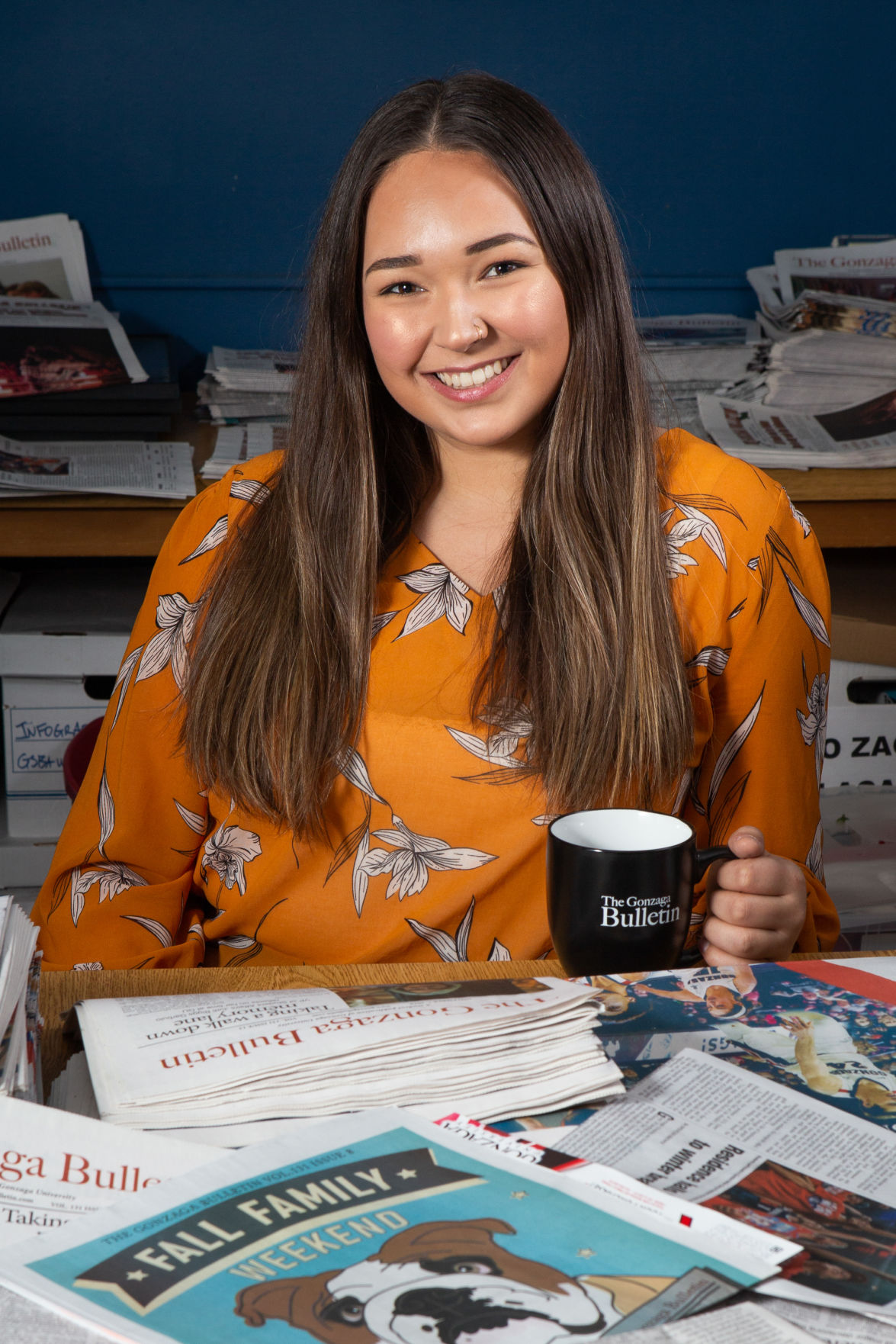 You can hear her contagious laughter from down the hallway and if a song by One Direction comes on she will immediately turn the volume up and start dancing.

But when it comes to her job, Morgan Scheerer is always ready and willing to work her hardest to create the best edition of The Gonzaga Bulletin. And now she will be serving as the spring editor-in-chief.

The Gonzaga Bulletin sat down with her to talk about her passion for journalism and her hopes for the publication in the coming semester.

The Gonzaga Bulletin (GB): Why are you pursuing journalism and how has the Bulletin played into that?

Morgan Scheerer: I’ve always loved writing. Growing up it was the only thing I was really good at. I always just loved the idea of telling stories, but I was never really great at fiction writing. Then my senior year of high school during the 2016 presidential election, I got really into reading the news because I was interested in the election and what was going on. I had never been super interested in the news until that point. I just started reading the news and thinking the writing was really interesting. I thought it was so cool.

So, I came in declared as journalism just because I cared about writing and I thought it was fun. Then at Gonzaga I’ve learned so much about the journalism industry and its importance to democracy and America as a whole. I’ve grown to love what it does and what it stands for and what it works to do.

Journalism matters to people and that’s why I’m going into it.

MS: One of the first stories I had ever written was for the news section and it was my second or third story and it was about the people who wash the dishes in the COG. It’s not my best written story at all or anything. But, I got to meet these really interesting people that Gonzaga students don’t even know exist. The man I talked to was a refugee and has children and works full time and goes to school and he barely speaks English and he was an amazing person. It was a really cool story to talk to and about people that others wouldn’t have thought about in the first place.

Last year I wrote about a new coffee spot, Cedar Coffee. The owners are refugees as well and I got to talk to them about adjusting to life in America and also about coffee, which he was so passionate about. It was such a cool way to talk about refugees and how immigrants and refugees benefit America through the lens of coffee.

GB: What’s the story you learned the most from writing?

MS: My very last story last spring I wrote about a study that two [communications] students were doing about how different genders use the RFC and how they feel about it. Basically, what they found is women don’t feel comfortable weightlifting in the RFC. So, I wrote that and published it and then it got a ton of backlash from people who work in the RFC and people who love the RFC. I was really bummed because I thought it was a really important issue to be brought to light. What I should have done is talk to someone in the RFC and I just didn’t think of it at the time.

I really learned the true importance of talking to everybody involved. If I would have sat down with someone from the RFC it would have been a completely different story. That was my first story and pretty much my only story that has gotten backlash of any kind. I learned from that and it’s something I’ll have to take with me for the rest of my life so it was good to learn that now.

MS: I want to work for a print newspaper. I want to be at a midsized like The Seattle Times. I love The L.A. Times because I grew up reading it. My dream job would be writing for The L.A. Times reporting on health care policy.

GB: What’s your goal for the next semester with the paper?

MS: I love this paper but I have some things I think we can do a better job at. I’m really pushing hard to create more content. I think eventually the Bulletin should move into being a twice-weekly paper. I think we have the content to do that and the people who would do it. Like The Daily Evergreen [Washington State University’s student newspaper] is a daily and they do it and I thing there’s no reason we can’t do it. I want to start that ground work and that foundation is creating more content.

I also want to have more online-only stories so people can come to us all the time whenever they’re wondering anything about Gonzaga and we will be the publication to provide that information.

Just providing more content. Each section will get two or three online-only stories per week if possible so we have more content.

I also really want to play with the design and I think we have a lot of room to do really fun and cool stuff on the front page and on the inside pages, and we’re not taking enough advantage of that right now. I think we can make it more visually engaging and really fun when the story content permits.

GB: If you could describe The Bulletin in one word what would it be?

MS: I don’t want to get too cheesy. The Bulletin in one word would be family. The Bulletin is where I found my place at Gonzaga and everyone who has been a part of it feels like they are part of my family and my Gonzaga experience and I’m really lucky for that.

GB: What does it mean to you to be taking on this role as editor-in-chief?

MS: Getting to do this is everything to me. It’s what I’ve been working toward for four years and I love this paper so much. I’ve worked my butt off for this paper because I love it and to be trusted with something that I care so much for is an indescribable feeling. I’m so excited to do it justice and only make it better and to lift up the voices of the staff writers. It’s everything to me to have this opportunity.