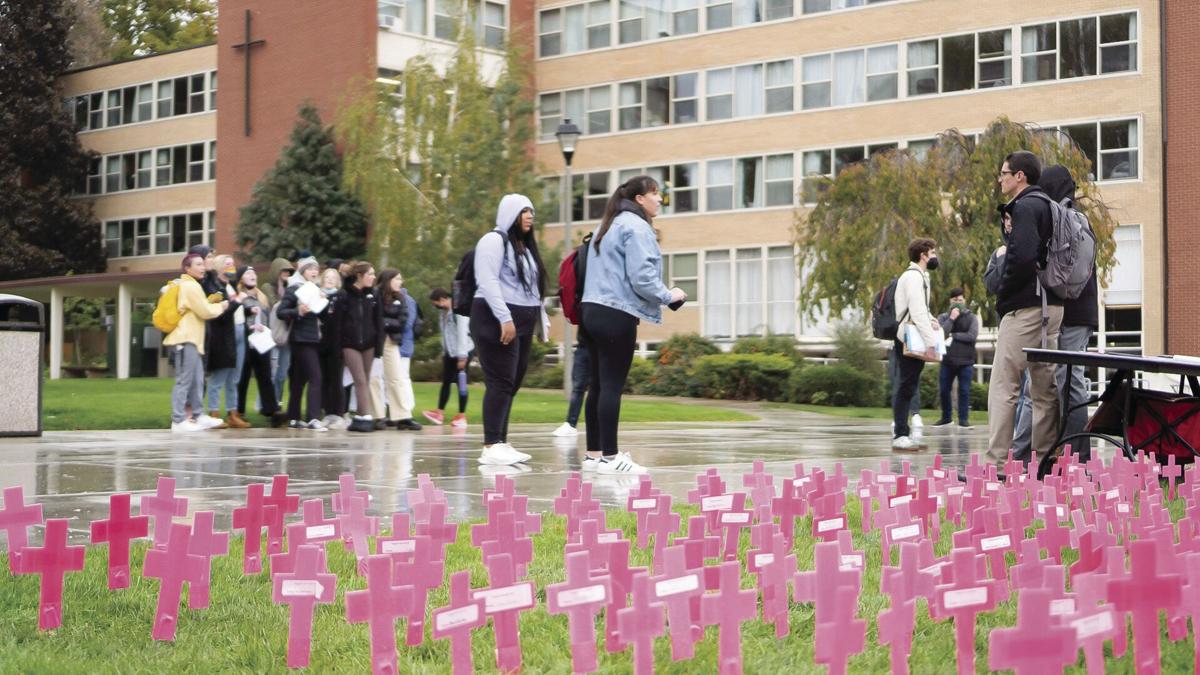 Zags for Life hold a conversation with protestors on Foley Lawn on Oct. 13. 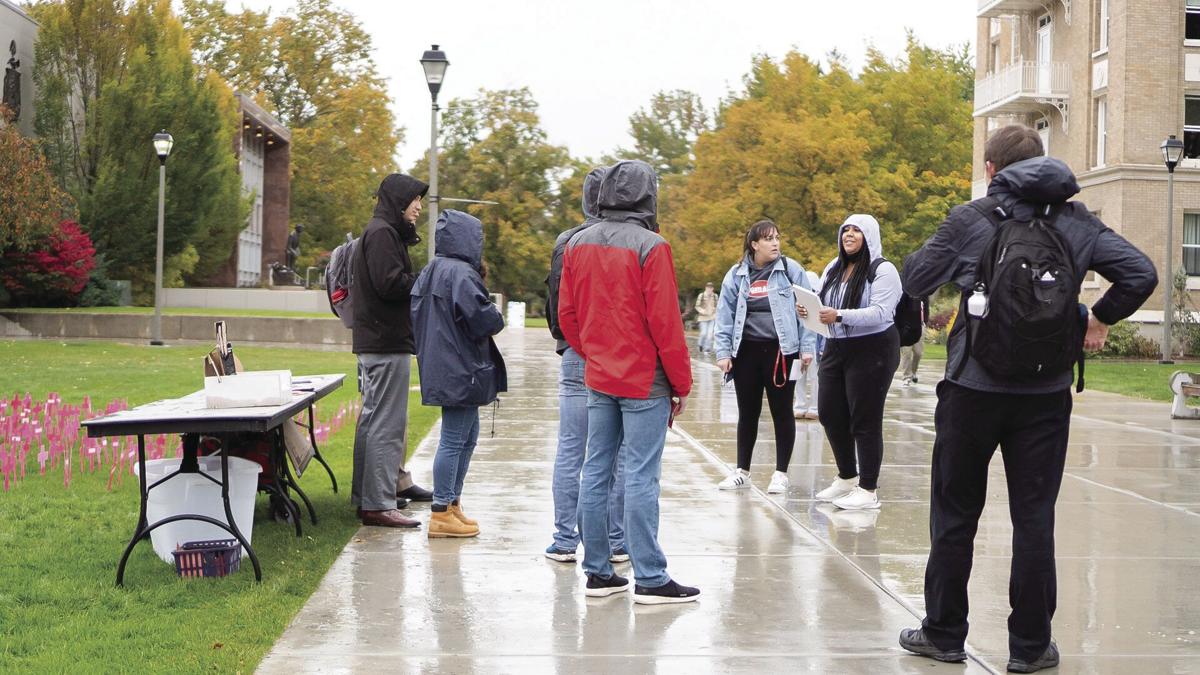 The Zags for Life Club held a demonstration on Oct. 13, which was approved by Zagtivites.

Zags for Life hold a conversation with protestors on Foley Lawn on Oct. 13.

The Zags for Life Club held a demonstration on Oct. 13, which was approved by Zagtivites.

A group of students who are a part of Zags for Life put up an anti-Planned Parenthood display on Bulldog Alley at noon, drawing counterprotests from students. pic.twitter.com/ezisPWK6Eq

The student-led, on-campus pro-life club set up outside the John J. Hemmingson Center with a display of the number of abortions that occur at Planned Parenthood on a daily basis. The group of GU students who organized the demonstration included members of the Zags for Life club and seminaries.

The club set up 972 pink crosses on Foley Lawn to represent each child that Zags for Life claims is aborted at a Planned Parenthood every day.

“What we want to say is that it’s not that we don’t support healthcare for women and basically everyone, but there's better ways to give people health care than giving money to Planned Parenthood, especially through the federal government,” junior Ian Willnerd said, a member of Zags for Life and part of the Seminarians for the Archdiocese of Seattle and Spokane.

The club submitted a request to have the demonstration and was approved by Zagtivities. The club said they were advocating for equal treatment for all lives, including the unborn.

According to an email sent out Friday by the GU's Chief Diversity Editor Robin Kelley, the event request that Zags for Life sent to Zagtivities.

"The event was submitted to Zagtivities as, 'a small display of crosses on the field to memorialize those who have lost their life before birth. We will have a table to discuss the issue of abortion with students.'" Kelley said in the email.

Willnerd said the demonstration was specifically directed toward Planned Parenthood, and the club also wanted to advocate for other federally-funded healthcare centers that provide the same resources Planned Parenthood does with the exclusion of abortion.

In response to the demonstration, a group of GU students initiated an impromptu protest, creating signs and exclaiming chants such as “My Body, My Choice,” and others.

The impromptu protest was discovered through a Snapchat story posted by a student asking others to meet outside of Hemmingson to protest, as individuals saw the Zags for Life stationed on Foley Lawn not knowing that they would be demonstrating.

Once other individuals saw the Snapchat story, the story was reposted on other Snapchat accounts, and students convened with the group as the demonstration was taking place.

Junior criminology, sociology and French major Haley Mayer said as a woman, she feels it is vital for people who menstruate to have a more prominent voice when discussing healthcare and their bodies than men.

“I think that women’s healthcare should be talked about by women and not by men and not by their views,” Mayer said. “Obviously not that we shouldn’t have conversations about it, including everybody’s opinions, but also, it’s just more important that we have a women’s perspective on women’s body issues and not a men’s perspective.”

The demonstration lasted for about two-and-a-half hours, starting at around noon and finishing at around 2:30 p.m.

Demonstrators and protestors stayed for the entire time, engaging in dialogue which at times was peaceful, and other times where conversation was spirited, and at times, displayed colorful language.

Vice Provost of Student Affairs Kent Porterfield said it is fairly common for students to engage in demonstrations and counter demonstrations, especially on college campuses. Porterfield also said campus security was observing the demonstrations, and although passion was displayed through strong and colorful language, no physical harm was done to anyone.

Porterfield said a BIAS report was filed in response to the demonstration immediately following the incident, but since there have been several others submitted by students to the BIAS team.

A five-person response team with representatives from the Office of Mission and Ministry; Student Affairs; Office of Diversity, Equity, and Inclusion; the Title IX Office; and Office of the President will be meeting with those who have filed Bias Reports, as well as with members of the Zags for Life club and others as appropriate, in order to investigate Wednesday’s events, make recommendations, and specifically address the individual Bias Reports.

As per an email sent by Chief Diversity Officer Robin Kelley and the BIAS team, all BIAS reports will be handed over to university leadership. A five-person response team has formed with members from the Office of Mission and Ministry, Student Affairs, Office of Diversity, Equity, and Inclusion, the Title IX Office and the Office of the President.

"[the committee] will be meeting with those who have filed Bias Reports, as well as with members of the Zags for Life club and others as appropriate, in order to investigate Wednesday’s events, make recommendations, and specifically address the individual Bias Reports," Kelley said.

An update is expected to be delivered to the GU community within the next 30 days.

Although there were disagreeing opinions on both sides, both sides wish to provide each other with information to think about.

Porterfield hopes GU can be a space where conversation can exist and he said doesn’t think it will be the last time something like this will happen, as it is part of campus life not just at GU, but campuses across the country.

“If we don’t create spaces to talk about issues, then we kind of stand over on the side in our own eco-chambers,” Porterfield said. “So my hope is that we would learn how to have difficult conversations about tough issues, and that we would see that as an opportunity to build community, and we would see that as an opportunity to express an important perspective that needs to be heard. I would hope that our university is a place where we can talk about tough things.”

A petition was also created by a group of students demanding GU to allow the creation of sex education and pro-choice clubs on campus. A club on campus, Gonzaga Feminism and Advocacy, was formed this semester to combine three clubs on campus with similar goals of advancing women's rights and a pro-choice agenda.

Get that bread: GU senior Delaney Carr bakes her way to success