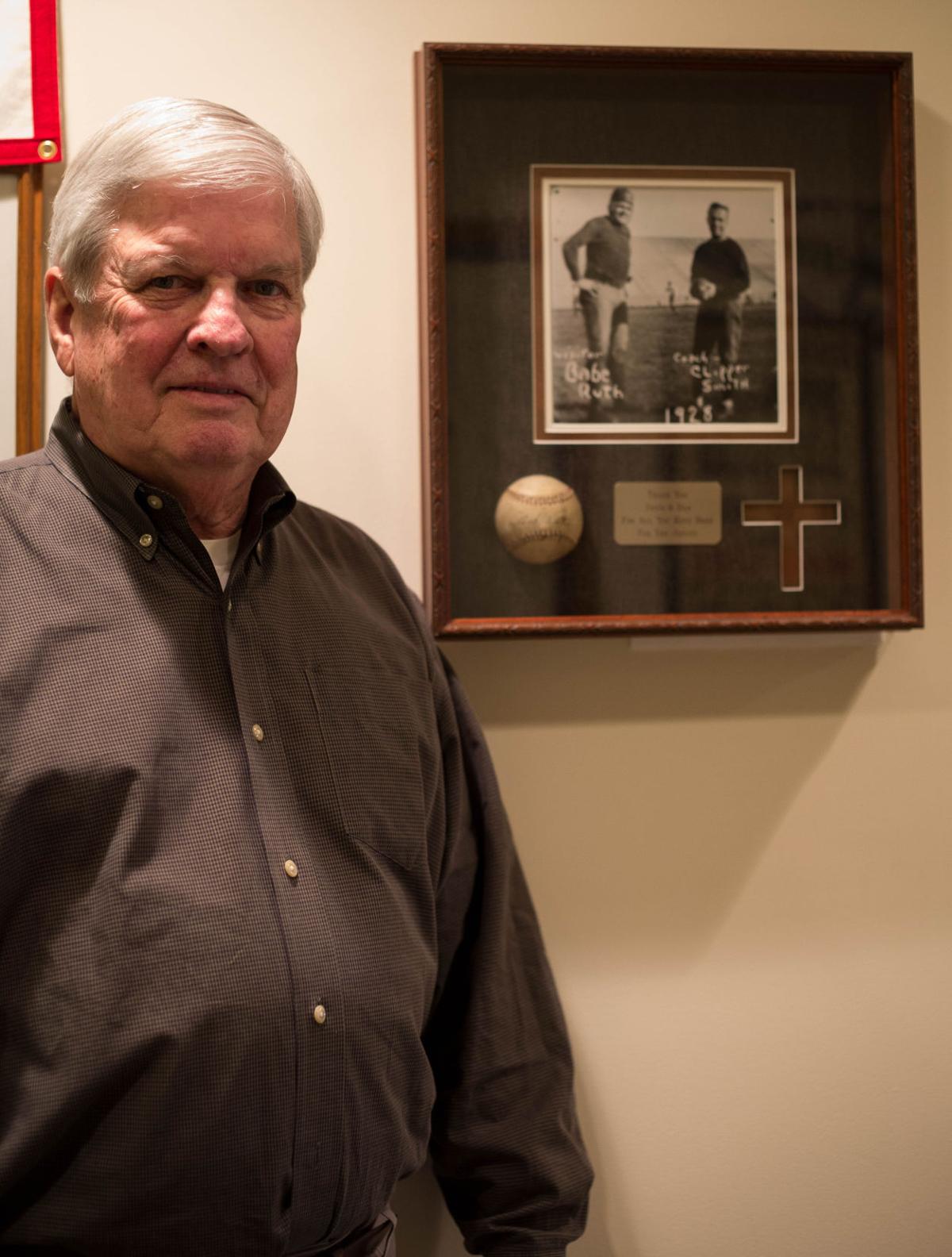 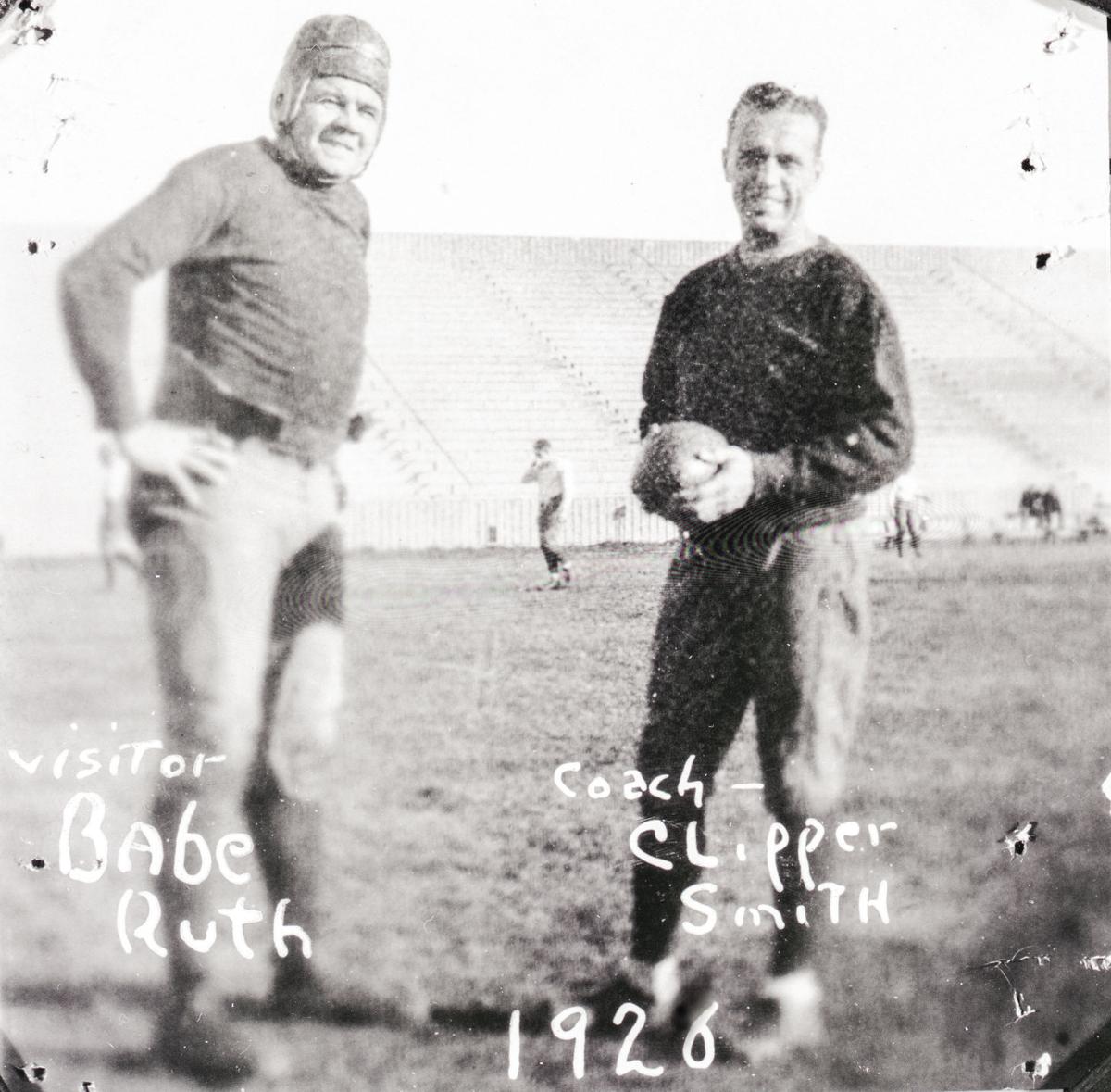 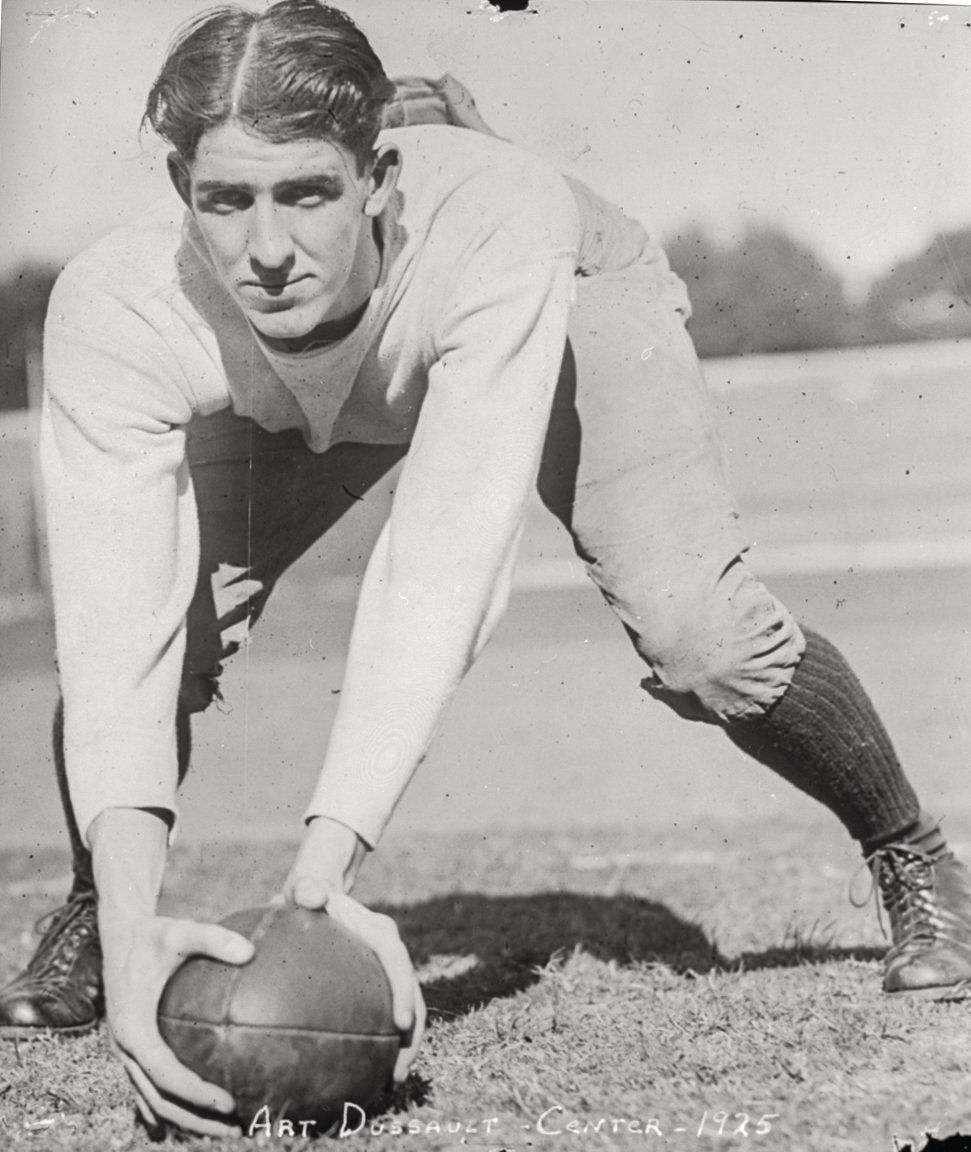 What do a legendary Hall of Fame Major League Baseball player, a beloved Jesuit priest and a prominent Spokane businessman have in common?

During his visit, Ruth signed a baseball that he gave to the center of the GU football team, a tall man by the name of Art Dussault. This talented center would go on to become a Jesuit priest GU knew and loved as he served in a variety of leadership roles, earning the nickname “Mr. Gonzaga.”

Fr. Dussault held on to the ball for the rest of his life. After he passed away in 1991, his memorabilia were kept in a vault for 17 years until Jesuit priests cleaned out his belongings and decided to give the ball to Dan Murphy, former president of Central Pre-Mix in Spokane and a lifelong baseball fan.

So what was Ruth doing in Spokane? The answer to that question is somewhat of a mystery, but the home run king’s day at GU began a 90-year-old journey of one of sports memorabilia’s greatest treasures that would forever connect these three distinguished men.

The Bambino in Spokane

Babe Ruth, the Sultan of Swat, was the dominant baseball player of the 1920s through the early 1930s and was voted one of the most popular sports figures of the 20th century. The Babe’s visit to GU wasn’t his first time in Spokane. Ruth played in an exhibition game at Spokane’s Natatorium Park on Oct. 17, 1924. He put on a show, hitting a home run over the center field fence in the eighth inning.

It is unclear why Ruth came to Spokane in the first place, but he was famous for organizing “barnstorming tours” throughout the U.S. in the 1920s and ’30s with Yankees teammate Lou Gehrig to play exhibition games and augment their baseball salaries.

In 1926, Ruth returned to Spokane for a week at the former Pantages Theater. During his stay, Ruth came to campus to meet the GU football team, including head coach Clipper Smith and then GU-senior Dussault. Ruth donned the biggest football uniform available, tried a couple of kicks, met with members of the team and gave a pep talk. He told the team he was unofficially picking them to win the Homecoming game on Thanksgiving Day against Washington State College (GU lost, even with the Babe’s endorsement).

It was this very meeting where Dussault received a prized piece of history. It was only fitting that one of the lucky people to meet Ruth would be the same man to become perhaps the university’s most well-known ambassador, one of its best historians and owner of a 50-year legacy of service.

The making of ‘Mr. Gonzaga’

Ever since Dussault arrived at GU, he immersed himself in athletics. Towering at 6-feet-4 inches, he lettered in football, basketball and track. Dussault even had the talent to play professional football but took a coaching job at Gonzaga High School instead.

While he had a great love for sports, he also kept the idea of the priesthood in the back of his mind and followed that calling when he entered the Society of Jesus in 1928.

Dussault began his career of service to the university in 1942 when he became athletic director, dean of men and coordinator of the Navy V-12 program. Throughout his career, he served the GU community faithfully as director of public relations, director of development, vice president of the university and vice president emeritus. Dussault’s dedicated service earned him GU’s prestigious DeSmet Medal, an honor also awarded to his friend, Bing Crosby.

Known as a great historian, Dussault was a collector of artifacts like Crosby memorabilia and, of course, the Babe Ruth baseball.

“He had memorabilia from various walks of life in his office,” said Dale Goodwin, GU communications manager and a good friend of Dussault. “It was always kind of a treasure trove to go to his office. He’d share something from his desk or shelf. Certainly the Babe Ruth ball was one of those.”

Dussault made his mark on athletics not only with his accomplishments on the field, but in support of athletes. He was rewarded by becoming the sole charter member of GU’s Athletic Hall of Fame and a charter member of the Inland Empire Sports Hall of Fame. He cared about student athletes and understood the important role sports played in their lives.

“He loved sports,” Goodwin said. “He was often seen at baseball games, in the old Kennel at basketball games, and he appreciated that athletics could teach young people a lot about leadership, working together, doing more for the benefit of teammates, and to care for each other. There was a lot of Jesuit ideals he saw embodied in the sports world.”

In 1991, more than 1,000 people gathered on GU’s campus to bid farewell to Dussault after his death at the age of 87. Dussault is immortalized on campus with his bronze bust that sits between College Hall and the Jesuit House, as well as a residence hall named in his memory.

“No one wore the title of Mr. Gonzaga with greater pride, with more devotion or dedication to Gonzaga than Fr. Art Dussault,” Goodwin said.

The passing of memorabilia

Fr. Dussault’s death meant the passing of the Babe Ruth baseball from one generation to another. For Dan Murphy, he encountered this piece of baseball history quite unexpectedly. As the current holder of this treasured Yankee memorabilia, it represents a sharp contrast with his profound allegiance to the Los Angeles Dodgers.

Murphy was born and raised in Spokane, growing up with a love for baseball.

“I was 9 years old when I fell in love with Jackie Robinson and became a Brooklyn Dodger,” he said.

Murphy went on to graduate from Seattle University in 1962, but returned to Spokane soon after graduation. His initial connection to GU began when he took accounting and law classes at the university. Now, Murphy is retired and has several grandchildren who attended GU.

In 2008, Murphy received a gift every baseball fan can only dream of.

Fr. Len Sitter, a Jesuit in charge of Dussault’s property and a good friend of Murphy’s, talked about the possibility of giving the ball to Murphy. Before he knew it, Murphy received the surprise of a lifetime in the mail. It was the Babe Ruth baseball in a shadowbox frame along with a photo of Ruth and Coach Clipper Smith.

“I was never expecting it,” Murphy said.

The ball meant a lot to Murphy as a collector of baseball memorabilia, but after almost 10 years, he may be ready to pass it on to the next generation. Murphy hopes to donate the baseball to GU if he sees a good place to display it, possibly with the addition of the new Volkar Center for Athletic Achievement.

The same baseball that started as a gift to a lucky football player in 1926 could be returning to the university where its journey began over 90 years ago.

“It’s going to end up back at Gonzaga where it belongs,” Murphy said.

Wherever it lands, the journey of the Babe Ruth baseball is a nostalgic thread woven through the lives of three distinguished men who left their mark at 502 E. Boone Ave.