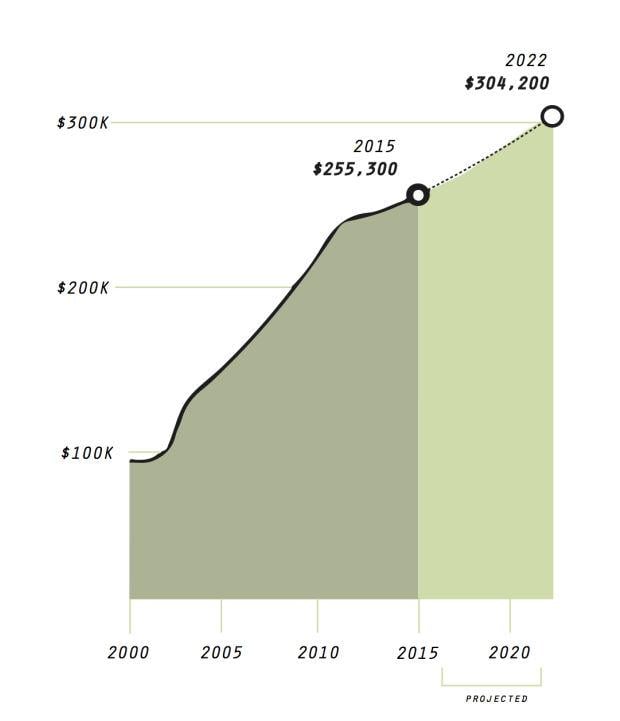 The price per unit is trending upward as television revenue increases. 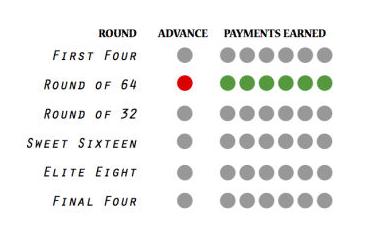 Here, the conference is paid $1.67 million over six years. 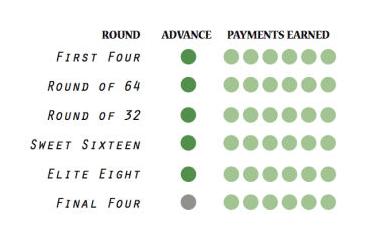 The second conference is paid $10 million over six years.

The price per unit is trending upward as television revenue increases.

Here, the conference is paid $1.67 million over six years.

The second conference is paid $10 million over six years.

For the first time in program history, the Gonzaga men’s basketball team made both a Final Four and the national championship game.

A run to the final game brought benefits to both GU and the West Coast Conference. But one profited more than the other.

The NCAA dishes out money at a fairly large clip. According to the NCAA’s website, about 60 percent of the NCAA’s revenue was returned directly to Division I conferences and institutions in 2012.

Since 1991, the percentage has stayed relatively constant, hovering right around the 60 percent mark.

What’s even more impressive is looking at the NCAA basketball tournament and how it impacts the revenue streams.

March Madness accounts for about 90 percent of the annual revenue for the NCAA. Oddly enough, Division I College Football Playoff and bowl games are independently operated, and the NCAA does not receive revenue from these events.

The reason for the consistent percentage lies in the TV deal struck with Turner Broadcasting first in 1991 and continuing through 2010. The ensuing extension was agreed to in April 2016.

With a new influx of money comes more payments to the schools and conferences.

The NCAA doles out a large sum of its money available from March Madness to conferences based on the success of member institutions. This is simply called the basketball fund.

“This year, every conference that sponsors Division I men’s basketball received $1,597,102 for its automatic qualifying team, which is often redistributed to members based on that conference’s revenue-sharing structure,” said Meghan Durham, assistant director of public and media relations for the NCAA.

The programs themselves receive no money for winning from the NCAA; that money goes to the home conference of the team.

The money given out comes in the form of units. This tournament, each unit was worth just over $1.5 million, to be distributed over six years at $264,859 each year.

Each school earns its conference one unit just for making the tournament and can win up to five more for advancing to the national championship game.

Money is not awarded for winning the national championship game.

Units are then distributed over a six-year span to lessen the direct impact of over $1 million in one swoop. But it takes a year for the money to make it back to the conferences.

“Units earned in this year’s tournament will begin to be distributed to member conferences in April 2018,” Durham said.

The WCC is the clear winner in this situation. It uses the money to pay for conference expenses.

But the conference also doesn’t charge schools league dues to be in the WCC. So the money brought in from the NCAA tournament is used to offset the lack of league dues.

“The money goes all to the league to run the league. Our league doesn’t pay dues, we don’t have the revenues that the Power Five conferences have,” Roth said. “We don’t have millions of dollars coming in through league TV contracts to pay things. Instead of paying dues, the league helps subsidize some travel – now they’re doing less of that than they used to, but the league takes it and operates on it.”

Where GU fits into this confusing area is how much it supports the WCC. Two seasons ago, Bloomberg looked at each conference and found out the top supporters of each conference since 1981.

Not surprisingly, the Zags had contributed 36 units ($34.33 million) to the WCC, but has only received approximately eight units ($6.82 million) from the WCC.

“These funds are paid on a six-year rolling period, again to conferences, and again redistributed to conference members based on the conference’s revenue-sharing model,” Durham said.

This past season, the Zags had its most successful year in program history reaching the national championship game, dropping it to the University of North Carolina.

“Our units we have earned this year — so we have played five games, so five units — will be distributed over the next six years starting next year,” Roth said.

All in all, the Bulldogs will have earned the WCC around $10 million this past season. Adding Saint Mary’s two earned units to the total, the WCC will make about $11 million from the 2017 NCAA tournament.

GU has been working for the last 20 years to change the distribution method in the WCC.

It has given the conference at least two units every year for the last 10 years alone, and of course, 19 straight seasons of at least one.

But this isn’t a new development for GU. This model has been used for as long as both Roth and Standiford can remember.

Head coach Mark Few has made his feelings quite clear about the current state of the WCC and its money handling.

“We need to talk long and hard about money distribution that we’re making for the league,” Few told The Spokesman-Review last season. “And if they’re not spending it on basketball, we don’t need to be sponsoring swimming at those schools or whatever they’ve got going. They’re not all in.”

It has been difficult for the Bulldogs to play in the WCC while they feel the other schools aren’t holding up their end of the bargain.

“Our league is unique, very unique in how they do those (money distribution),” Roth said. “A lot of leagues will distribute it unequally, very few leagues distribute it equally.”

GU is looking to change the model in place because it doesn’t encourage growth in the basketball programs, which produce the most revenue for the conference.

“I think a lot of work has been done and there is a lot of support at both levels, both the commissioners and the presidents to create a model that is better for the disproportionate achievement that Gonzaga basketball has presented and I think they are trying to respond to that,” Standiford said.

Roth has been on the case since 1999 when GU was making obvious strides both within the conference and nationally.

Each of the 31 conferences in Division I sends one school to represent them in the NCAA tournament, but after that first game in the tournament, which is the one who receives the praise?

“To me, the argument is, what happens beyond that first game has nothing to do with the conference,” Roth said. “That has 100 percent to do with that school. I would like to see a majority of that money to come back to that school. I have said that for years, I have fought for that, it’s just, we are one vote [in the WCC].”

Both Roth and GU President Dr. Thayne McCulloh have worked together for almost seven years on changing the money distribution model, but not much has budged.

Standiford said even with the lack of money coming from the basketball fund, the university has been able to construct impressive buildings such as the new Volkar Center for Athletic Achievement, the McCarthey Athletic Center and the Patterson Baseball Complex, all on private sources and donations. No university money was used.

Even with the new athletic work around campus, McCulloh and Roth will continue to set their sights on improving the current model.

“Between Mike (Roth) and Thayne, they will do everything they can to deliver to the closest they can to get a fair and equitable distribution of our revenues,” Standiford said.

But don’t blame the NCAA. as it decided to use this model in 1991 when the revenue from the tournament ballooned and it became obvious not to ignore the benefits of redistributing the money back to the conferences.

“I think the money coming back from the championship to the member institutions is appropriate and sufficient,” Standiford said. “There is a lot of money there.”

“It’s not like the NCAA is sitting there with a pot of cash in Indianapolis that they are just hoarding by any stretch,” Roth said.

Standiford said he has no qualms about how the NCAA handles the situation, especially because a large sum of money is sent back to the players in many ways beyond the units given out from the tournament.

Nearly $230 million is in the basketball fund alone, according to NCAA projections.

That doesn’t include almost $600 million more in grants, sponsorships and scholarships provided to the schools directly from the NCAA.

One of the coolest camping tents is the KingCamp ROMA4 D Shape Inner Door, 4-Person Tent with Compression Bag. This tent is windproof, with tear resistant outdoor shelter that easily accommodates four campers. With a center height of 6 feet 5 inches, the spacious 205 x 95 inches interior converts into two bedrooms that easily accommodate four campers, with one central big living area at walnut creek heating and air. The tent has a D-shaped door for easy entry and exit, a side door, an inner door with zip window to aid ventilation, and a vestibule that provides sufficient storage space for camping gear.

Eat what you like: Gonzaga Culinary Council gives students a say