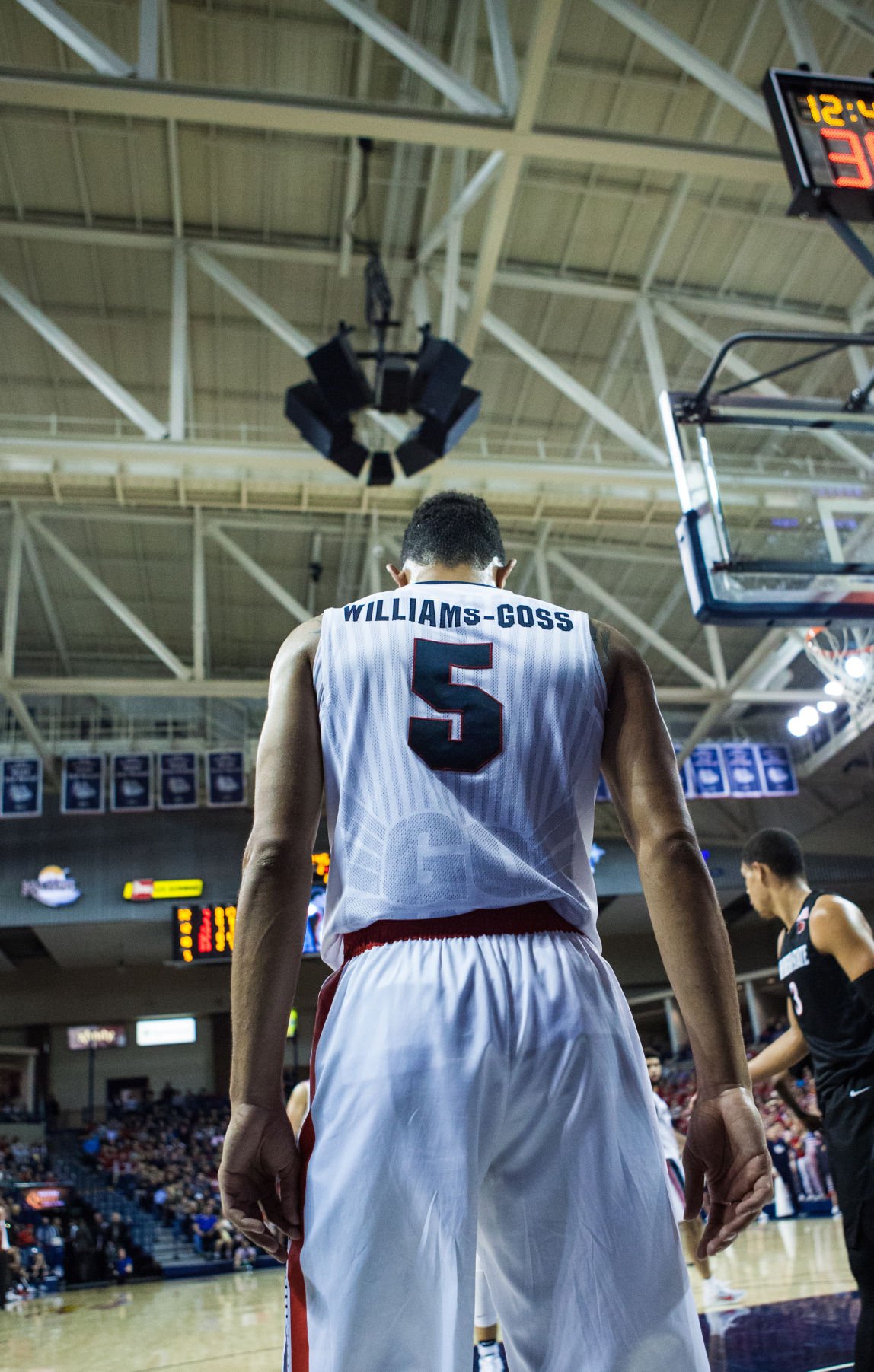 On Nov 14 2016, Junior Gard, Nigel put up a good fight to score 10 points in the game. Gonzaga Bulldog won by 69 to 48 against the San Diego Aztecs in the McCarthey Athletic Center. 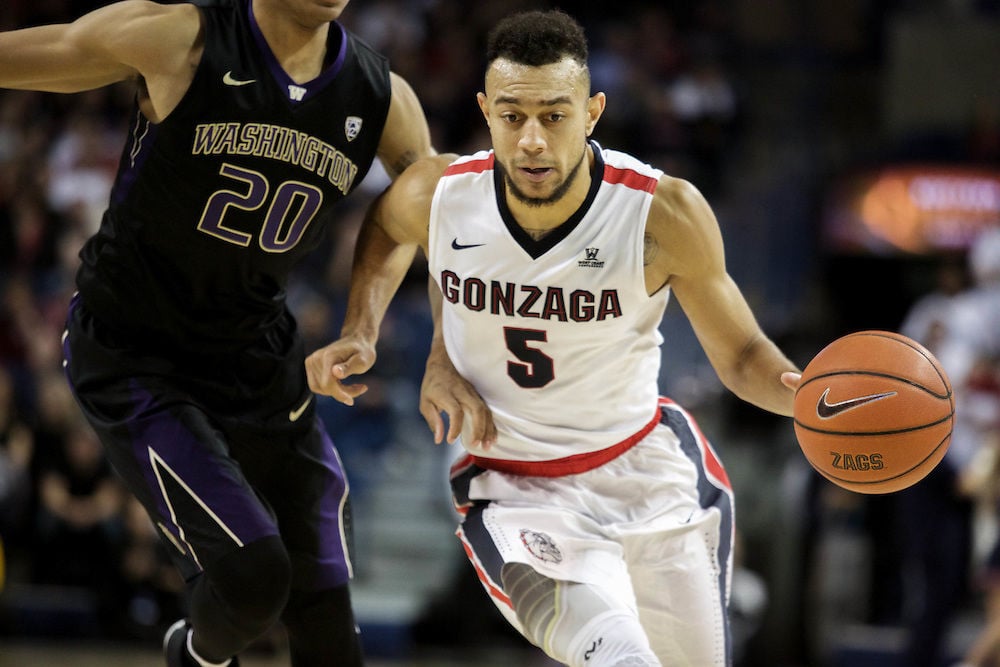 Nigel Williams-Goss is a senior on the Gonzaga Mens Basketball team and has been recognized as a leader among his teammates. Williams-Goss has been playing at Gonzaga for the past two seasons after playing his first two at the University of Washington. 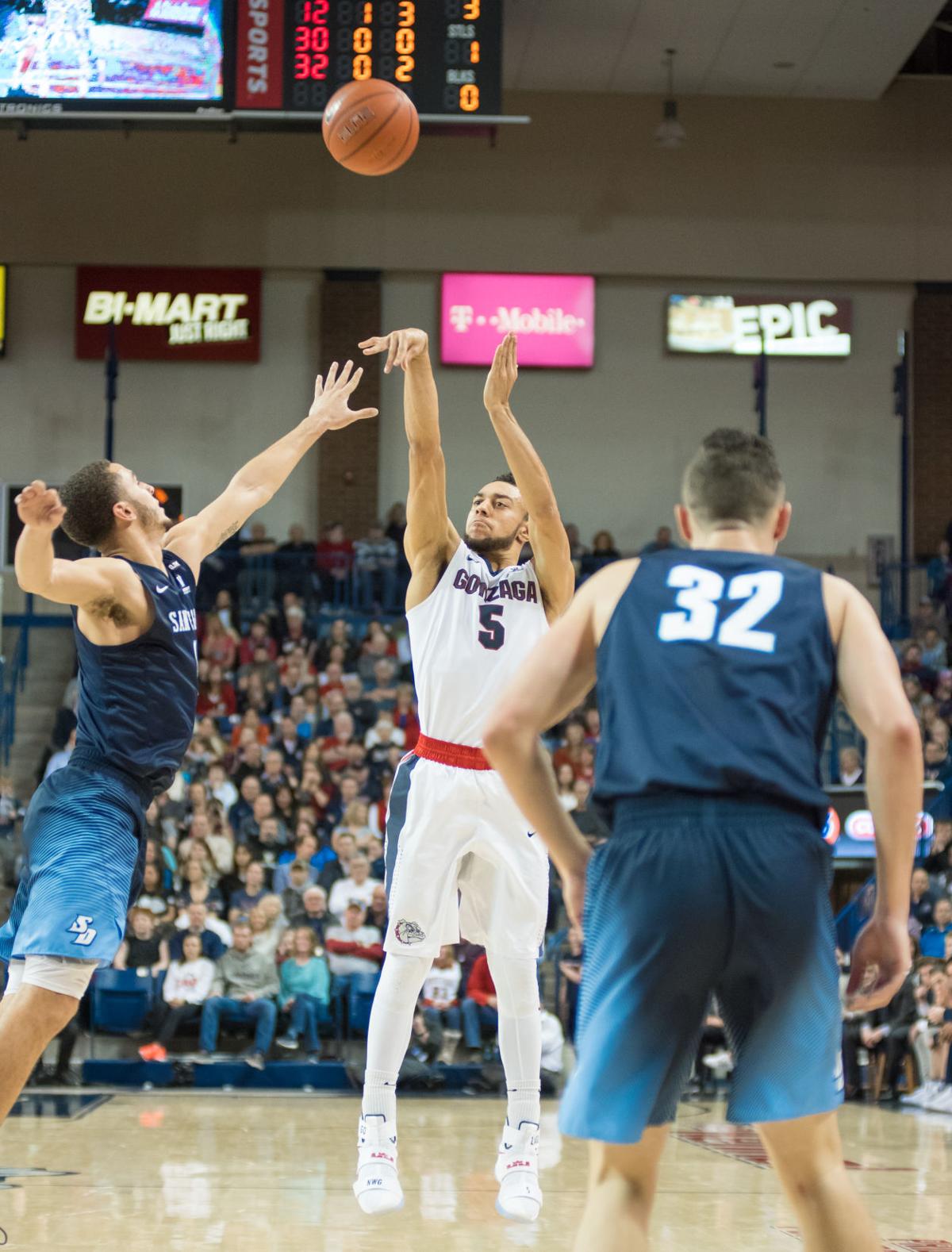 On Nov 14 2016, Junior Gard, Nigel put up a good fight to score 10 points in the game. Gonzaga Bulldog won by 69 to 48 against the San Diego Aztecs in the McCarthey Athletic Center.

Nigel Williams-Goss is a senior on the Gonzaga Mens Basketball team and has been recognized as a leader among his teammates. Williams-Goss has been playing at Gonzaga for the past two seasons after playing his first two at the University of Washington.

Every great team needs a proven leader. And it’s not every day a team comes across a player who combines speed, strength, defense and scoring ability with leadership and character. In the midst of a historic season, the Zags seem to have found this rare type of player in Nigel Williams-Goss.

The redshirt junior transfer from the University of Washington has made his mark at Gonzaga, rising to his leadership role in a seemingly graceful transition. Yet, Williams-Goss’ journey has not gone without adversity. Going through a redshirt year was tough for the guard, but his intangible skills have set him apart to be a leader for others on and off the court. He’s the special player the Zags can count on night in and night out to be a key part in extending the team’s success.

Since he was young, leadership has always been one of Williams-Goss’ biggest qualities.

At 13 years old, he was competing against older competition as a member of a 17-and-under AAU team. It didn’t take long for coaches to notice Williams-Goss had something special. They would compliment him and tell his older teammates they were being outtalked on defense by a 13-year-old.

The young player wasn’t afraid to call out older teammates while holding himself to the same high standards. Mature beyond his age, Williams-Goss looked to learn from the best.

“Growing up watching some of my favorite NBA players and seeing how they led their teams is where I picked up my leadership,” Williams-Goss said. “I told myself if that’s what they do, then that’s what I got to do, too.”

Williams-Goss’ leadership ability continued to grow in college as he earned high honors at UW. There, he became a member of the 2014 All-Pac-12 Freshman Team, led conference freshmen in scoring at 13.3 points per game and set the UW freshman single season assists record with 140.

When he chose to transfer, Williams-Goss selected GU because he saw the team had a chance to accomplish something special and he could not pass up the opportunity to be a part of that.

Having a style of play where the team would use two point guards was an added bonus for Williams-Goss. Playing alongside Josh Perkins, the two guards have established a strong relationship that goes beyond basketball.

“Not only are we the two-headed shark on the court, we are brothers off the court,” Perkins said. “He’s a guy I go to for advice no matter what the situation is. He’s a great teammate, a great friend and a great brother.”

In his redshirt year, adversity hit in the form of an injury for Williams-Goss. He injured his ankle in the middle of the year and had to have surgery, causing him to miss practice for a period of time. However, this setback did not stop Williams-Goss from working hard to come back stronger.

“That was really tough for me because it was already tough not playing and then to have the injury on top of that was really hard,” he said. “But when I was healthy I was constantly lifting, constantly in the gym just trying to get better.”

While sitting out last season, Williams-Goss became a more mature player with a renewed mindset. Being on the sidelines allowed him to see the game from a different perspective and slowed the game down for him. Now, Williams-Goss is reaping the benefits of that learning experience.

Through 24 games, Williams-Goss is leading the team in scoring at 15.6 points per game and shooting 51 percent from the field. He’s won multiple WCC Player of the Week awards, an Advocare Invitational MVP and is a finalist for the Bob Cousy Point Guard of the Year Award. His play and leadership have been pivotal contributions in helping the Zags reach their No. 1 ranking.

Williams-Goss leads on the court with his ability to be both a scorer and distributor. He can take over a game or create scoring opportunities for teammates. On a team with plenty of depth, he keeps the offense rolling even if he’s not the leading scorer every night.

On defense, Williams-Goss can be counted on to guard opponents’ biggest threats. He stays aggressive, leading the team in steals at 1.7 a game. He’s a vocal leader and aims to be the loudest talker on defense to provide good presence for everyone on the floor.

“My leadership style is a mix between vocal and leading by example,” he said.

Williams-Goss believes the team has come together quickly by uniting around a common goal: being unselfish and sharing a desire to do what’s best for the team. In addition, his communication skills are an asset in bringing the team together.

“The best thing Nigel does is he is a great communicator,” head coach Mark Few said. “He talks on the floor and is constantly communicating, which from a coaching standpoint you just love.”

Outside basketball, Williams-Goss sets an example by leading in the classroom. He puts an emphasis on working hard every day to achieve good grades. In the fall, Williams-Goss completed his undergraduate degree as a member of the Dean’s List. He embraces the GU community, often praising the high level of support.

As a psychology major, Williams-Goss enjoys learning how people interact differently and how to get the most out of others. His degree guides him in school, basketball and life.

“It helps me understand how people work,” he said. “It’s about understanding that people respond differently to different approaches and just trying to use it to help get the best out of all my teammates.”

Another passion besides basketball for Williams-Goss is his love for fashion. Williams-Goss and his childhood friend, Alex Roth, share a bond over this hobby. The friends send pictures back and forth and discuss the best clothes, footwear and accessories.

“When it comes to passions, fashion is a close, close second behind basketball,” Williams-Goss said. “There is a confidence that goes with fashion that I admire. Fashion is so unique to everyone and is a cool way to tell people about yourself without saying anything.”

No matter where he goes, Williams-Goss’ good spirit does not change. He is the same genuine leader who strives to be the best in everything he does. Williams-Goss’ friends and people who know him well attest to his character.

“Nigel has always led by example,” said Roth, a senior at Oregon State. “He always carries himself in a way that is extremely powerful and people gravitate to.”

Williams-Goss has dreams for basketball and for something bigger than himself.

His two biggest basketball goals are to help the Zags win a national championship and then play in the NBA. Focused, determined and inspired, Williams-Goss is fueled by his biggest influences: his parents and grandmother.

“I do everything for them because they’ve supported me 100 percent since the day I picked up a basketball,” he said.

After basketball, Williams-Goss hopes to give back in a major way. He is motivated to do as much as he can with charities as giving has been something that’s always been instilled in him.

Williams-Goss is passionate about helping inner-city children and victims of domestic violence. He is inspired by his mother, who stands up for women’s rights and serves women and children through her work in therapy. With this example, the guard hopes to serve in a mentor capacity.

“To break the cycle of poverty in inner-city communities and closing the economic gap in our country starts with the youth,” Williams-Goss said. “Giving them a different perspective on life by teaching them and equipping them with the tools necessary to be successful in life is important.”

Williams-Goss is not only striving to leave a legacy with the Zags and how far they go, but in life and his impact on others.

“It’s not important about what you get, it’s about how you help other people.”