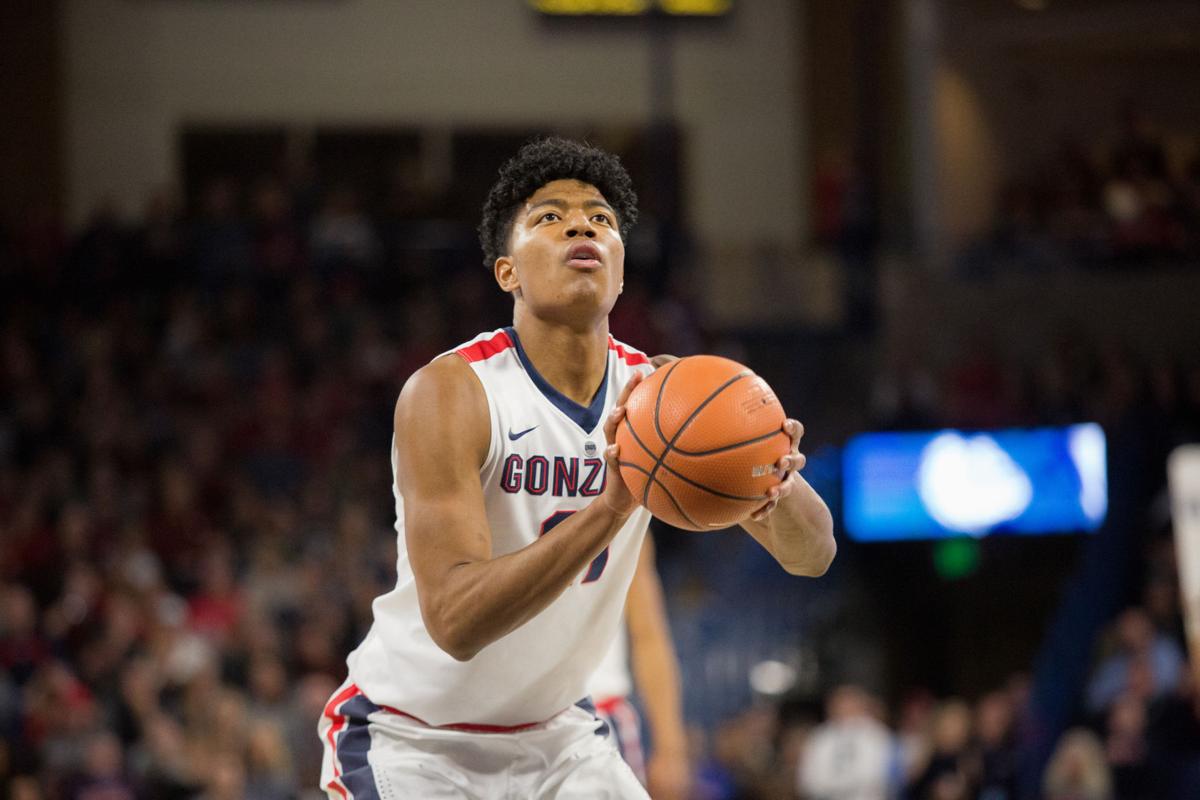 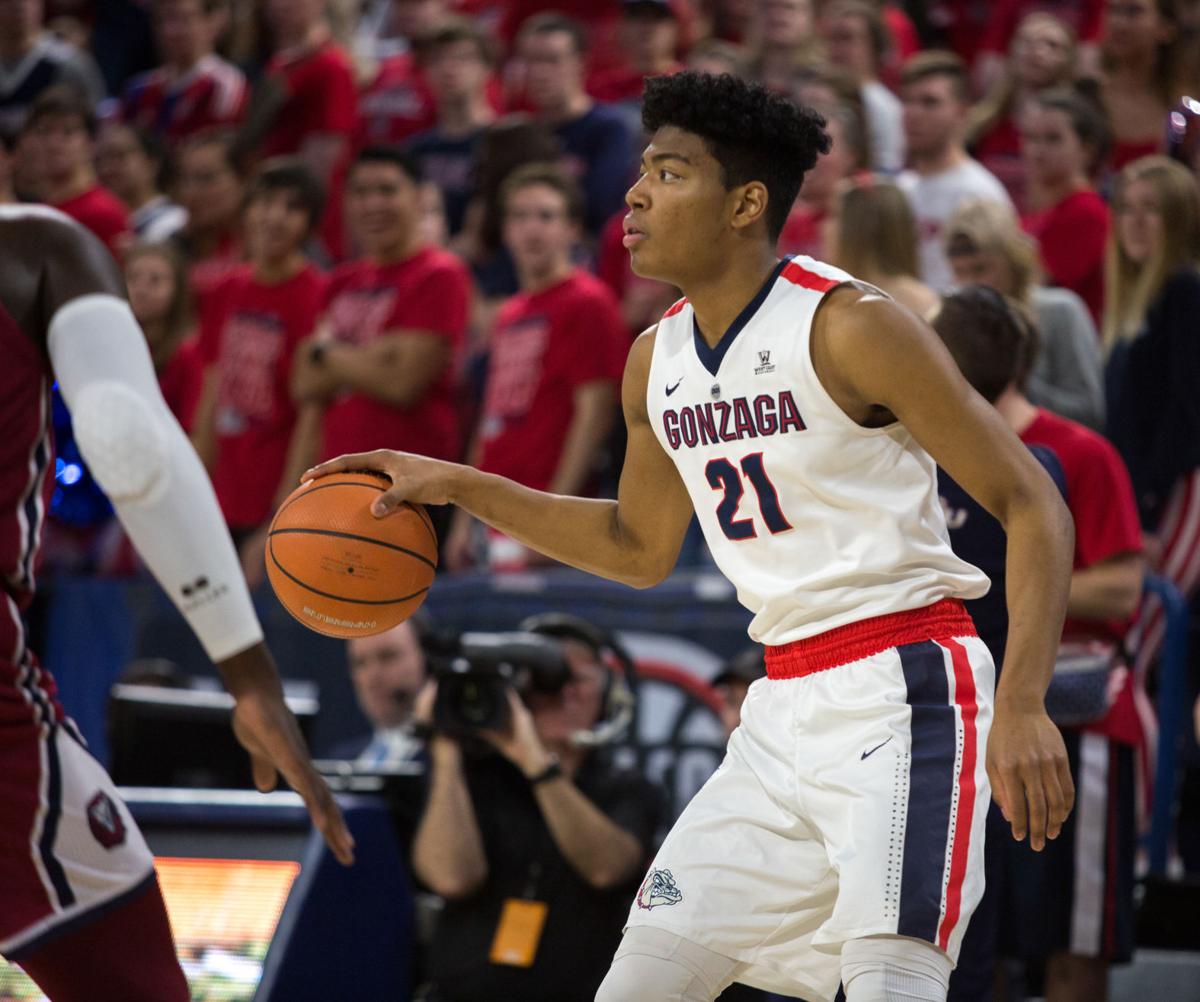 One may have seen the highlight-reel dunks, the electrifying blocks or the incredible athleticism, but to many, Rui Hachimura remains a mystery.

He arrived from Japan last season and quickly seized the attention of Gonzaga fans with the raw energy he brought in limited playing time. Now, Hachimura is the first man off the bench for head coach Mark Few and has established himself as a player with the ability to take over a game, all while keeping a low profile.

What many may not know are the challenges Hachimura has had to overcome.

“When we first brought Rui here, I reminded people that this guy probably has more obstacles and further to go than any guy we’ve ever brought in here,” assistant coach Tommy Lloyd said. “And he’s passed it with flying colors.”

Right away, Hachimura took on learning to speak English, adapting to a new culture and discovering how to play at the highest level of college basketball — a tall order for the then-18-year-old from Toyama, Japan.

Hachimura didn’t start out playing basketball. He grew up playing soccer, baseball and running track, and even learned karate. Basketball did not become part of Hachimura’s life until he was 13.

He soon realized basketball was the sport for him. Running fast, jumping high and the sport’s quick pace made it a glove-like fit. His game quickly developed to making his mark on a national level for Japan, gaining attention from recruiters all over the country.

GU first discovered Hachimura’s talent on video, watching him at the 2014 FIBA U-17 Basketball World Championships. Hachimura averaged a tournament-high 22.6 points per game, grabbed 6.6 rebounds and blocked 1.7 shots a game. One highlight performance included a 25-point showing against Team USA, a team that went on to win the title with four players chosen in the 2017 NBA Draft: Jayson Tatum, Josh Jackson, Caleb Swanigan and Ivan Rabb.

Hachimura collected offers from other big-time college basketball programs such as Arizona, LSU, St. John’s and Vanderbilt before committing to GU. When making the decision to leave home, Hachimura chose somewhere he knew he’d have a family-like atmosphere.

The 6-foot-8 forward had only been to the U.S. once before — a family trip to New York when he was 12 years old. Living in the U.S. was a whole new way of life for him and that made for a difficult transition.

“It’s been hard, but it’s getting better,” Hachimura said. “Language was the most difficult. I learned by talking to media, teammates, coaches, friends and in class.”

In his interactions with people, Hachimura found what he loves about his new home. He is a fan of American food and the people who have helped him improve in all areas. He’s especially appreciative of his teammates who have helped ease his transition, like fellow international player Killian Tillie.

“We’re more like a family; everyone takes care of each other,” Hachimura said. “Here there’s a lot of different people, international or U.S.”

As a freshman, Hachimura appeared in 28 games, averaging 2.6 points in 4.6 minutes a night. He also became the first Japanese native to play in the NCAA Division I men’s basketball tournament.

Hachimura has taken a huge leap in his second season, boosting his average to 11.4 points on 61 percent shooting in 20 minutes per game. The key difference has been his ability to adequately harness his size and strength to his advantage.

“Early on, he looked like Tarzan, but sometimes was playing like Jane,” Lloyd said. “He wasn’t physical, but now he’s figured out how to use his body to his advantage.”

In addition, Hachimura brings a raw intensity to the game. Stats can’t capture the level of energy and spark he brings off the bench. As soon as he checks in, fans and opposing teams take notice.

One opponent in particular has witnessed how effective Hachimura can be and that is rival Saint Mary’s. Hachimura was explosive in both matchups, scoring team-highs of 23 and 21 points against the Gaels this season.

Playing some of his best basketball, Hachimura is now brimming with confidence. Yet the sophomore remains focused on making improvements and living with humility.

“My confidence is high, but I got to stay humble,” Hachimura said.

Meanwhile, Hachimura’s success has earned him the admiration of his home country. GU games are being streamed in Japan to see Hachimura. In an agreement with ROOT SPORTS, J SPORTS broadcast four Zag games to as many as 6.5 million households in Japan.

“It’s a joy for Japanese fans to see that Rui is doing so well, especially because America is [at] the top in basketball,” said Yoko Takeda, a Japanese reporter speaking through a translator, who was on hand to see Hachimura score 10 points against LMU on Feb. 15.

Last summer, Hachimura competed for Japan in the 2017 FIBA U-19 Basketball World Championships, leading the team with 20.6 points and 11 rebounds per game. He gained valuable experience facing players from all over the world while practicing English with his coach, Torsten Loibl.

Outside of basketball, Hachimura is a sports management major and enjoys playing video games with his team.

At home, Hachimura has a tight-knit family that supports him from afar. His father is from Benin in West Africa while his mother hails from Japan. Although his parents haven’t been to a game in Spokane yet, his mother has made it to some of GU’s biggest contests like last season’s game against Arizona in Los Angeles and the 2017 Final Four.

Hachimura shares a close relationship with his younger brother, who is 18, and sisters, 16 and 10. Against LMU, his brother got the chance to see Hachimura play in person, making for a special moment where they took photos together.

Looking to the future, Hachimura draws inspiration from studying NBA stars. He cites Giannis Antetokounmpo, Kawhi Leonard and Jabari Parker as influences he looks up to and can compare his game to. Watching these professionals motivates Hachimura to reach his goals.

“I want to go to the Final Four again with the team, go to the NBA and play in the 2020 Olympics in Tokyo,” Hachimura said.

Hachimura points to the Final Four as his favorite moment as a Zag and wants to do whatever he can to make it back.

Playing thousands of miles from home, Hachimura has settled into his own and earned the respect of his team. Coaches admire his positive attitude while teammates admire his character.

“I think they’ve loved Rui from day one,” Lloyd said. “Rui is an extremely unselfish person and a good teammate. He’s been a joy in every sense.”

Overcoming a language barrier and answering the challenge of playing in America, Hachimura has proven he belongs. He’s made a name for himself with rising potential to become an matchup nightmare. Yet he stays true to his humble character and gives credit to his team.

“I was the guy who didn’t speak anything last year, but they were already trying to help me with speaking English or anything I did,” Hachimura said. “That was so fun and very helpful for everything, on the court or off the court.”

Breaking: GU athletics to require proof of vaccination from fans