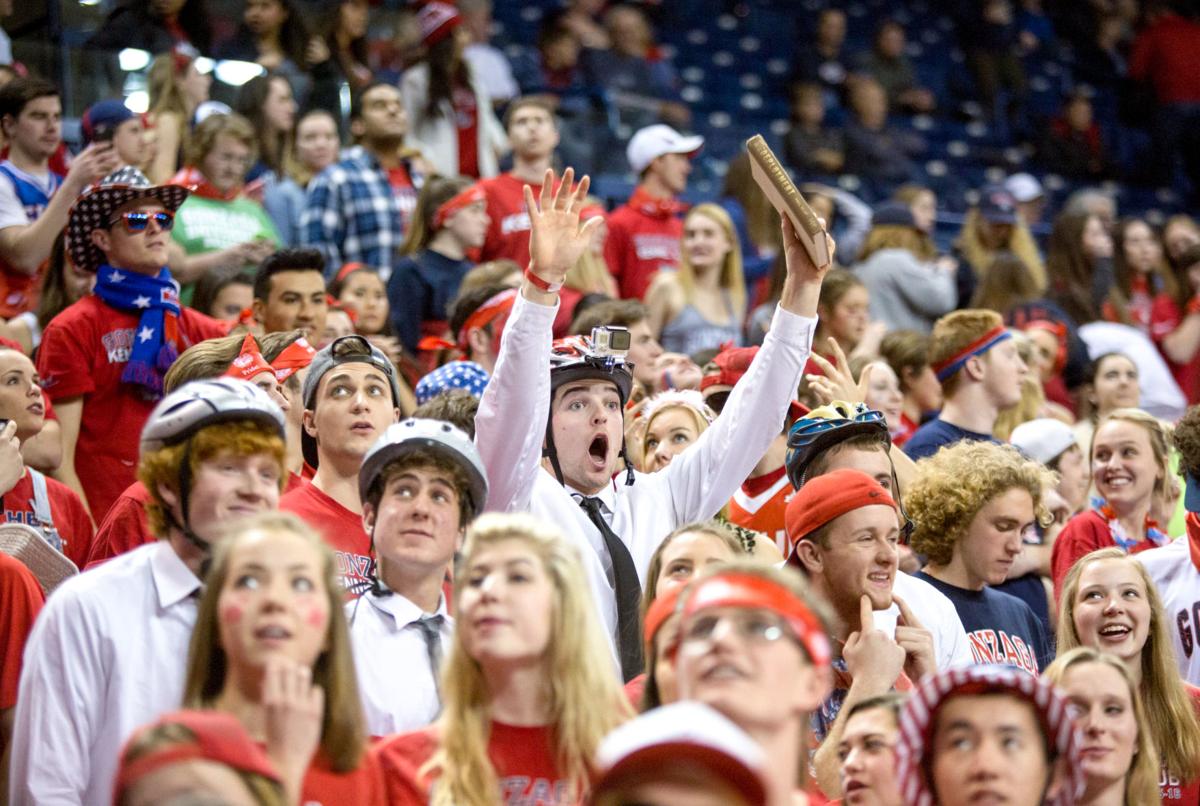 Gonzaga University administration is calling on students to not attend the BYU game in mormon missionary attire. GU would like game goers to wear other clothes to show their school spirit. 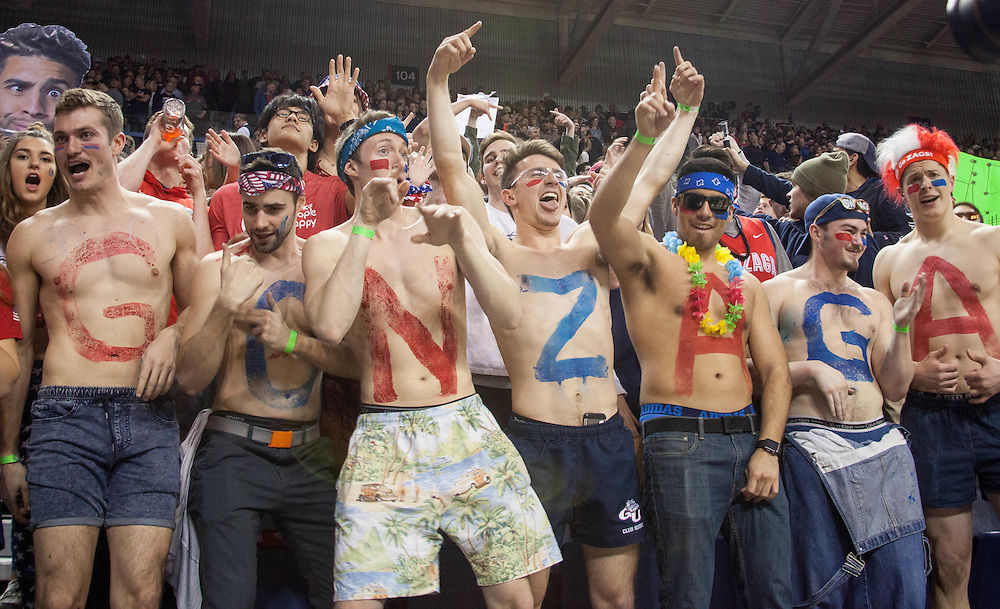 Gonzaga University administration is calling on students to not attend the BYU game in mormon missionary attire. GU would like game goers to where other clothes to show their school spirit. 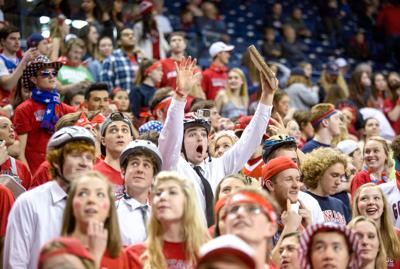 Gonzaga University administration is calling on students to not attend the BYU game in mormon missionary attire. GU would like game goers to wear other clothes to show their school spirit.

Gonzaga University administration is calling on students to not attend the BYU game in mormon missionary attire. GU would like game goers to where other clothes to show their school spirit.

Every season, BYU enters the Kennel for the highly anticipated West Coast Conference match-up and is welcomed by by a sold-out McCarthey Athletic Center which features an overpacked student section that bleeds into the aisles, a slew of punny signs and an array of costumes.

Of those costumes, there are a handful of students dressed up as Mormon missionaries. This year, Gonzaga University is trying to change that.

On Friday, Jan. 26, a meeting was held that included members of the Athletic Department, University Ministry and Mission, Student Development, Advancement and Alumni and the General Counselor’s Office to discuss ways to eliminate the mockery and mimicking of Mormons.

“[Those costumes don’t] really represent who we are as a university and it shines bad on us and doesn’t show a welcoming community that supports everybody,” Colleen Vandenboom, assistant dean of Student Involvement and Leadership said. “So every year it has come up and we have been talking a lot with Kennel Club and they agree — it’s not cool.”

The Kennel Club Board discussed this topic during its retreat this summer, and while the board was not present during the meeting last Friday, a letter from Kennel Club Board president Claire Murphy was read to those in attendance.

“The missionary costumes and posters that degrade the Mormon faith that show up in The Kennel every time we face the Cougars makes my stomach twist into knots,” Murphy said in her letter. "We are a Jesuit institution that stands to ‘foster a mature commitment to dignity of the human person, social justice, diversity’ and ‘cultivates in its students the capacities and dispositions for... ethical discernment, creativity, and innovation.’ How are we living up to this mission if we are tearing down the spiritual identity of others?"

Conversations about the inappropriateness of the costumes has been going on since 2011, when BYU joined the WCC. In 2016, the Bulletin’s most popular story was a column criticizing the students in the Kennel dressed up in such attire.

While talks of change have been happening for seven years, Vandenboom admits that having Jesse Wade, a member of the LDS church who went on a mission last year, joining the men’s basketball team was a catalyst for action.

“When we learned that [Wade] had been recruited to come here, we had to be legit,” Vandenboom said. “Like OK, we have been talking about it enough and now, not only is it embarrassing, but it’s like, really? He’s one of our community members.”

Wade isn’t the only relationship GU shares with the LDS church.

Brigham Young, one of the founders of BYU, had a grandson attend GU and the Rev. Peter John Desmet, a Jesuit missionary for whom GU’s Desmet Hall is named, worked with local LDS members in Spokane.

The history GU and the LDS church have isn’t the only thing motivating the university to change its standards.

“Thinking about religion persecution and allowing people to celebrate their faith in a honorable way is critical,” Vandenboom said. “As Catholics, and we're not all Catholic, but how do we persecute or make fun of another religion when we are sitting here at our university because of that. It just is not right.”

To implement the changes the administration wants to see, the Kennel Board will be sending out an email to the GU community encouraging those who plan on attending the BYU game to dress appropriately.

“We can’t stop anyone from doing it but we need to put it on people’s radars,” Murphy said. “A lot of times, people just need a little reminder or have a morality check of ‘What do I actually stand for? Why am I wearing this?’ ”

On gameday, members of the Ministry and Mission, Student Development, Athletic Department, including athletic director Mike Roth, and the Rev. Frank Case, who sits on the men’s basketball team’s bench, will be monitoring the line of students waiting to enter the McCarthey Center looking for Mormon Missionary costumes.

If spotted, there will be “conversations” with those dressed up.

Those conversations will also include Murphy.

“I would really like to hear why do you dress up like that? What’s the point,” Murphy said. “I definitely want to be involved in those conversations. I think having a student there, instead of just two or three people you may not have daily contact with, can help facilitate those conversations and make them a little easier."

The Kennel Club Board will also have extra Zag shirts as an option for those dressed as missionaries to change into.

“What [the students] are trying to accomplish can still be accomplished by other means,” Chris Standiford, deputy director of Athletics and chief operating officer said. “They are trying to create an awesome environment where there is a sense for our student athletes and hostility towards the opponents so they are uncomfortable in their environment. But we can accomplish that through means that are more appropriate.

While those involved cannot force students to wear or not wear certain attire, one thing is for sure: it will not go unnoticed.

“This has to be the year we don’t see that anymore,” Vandenboom said.

The game against BYU will take place on Saturday, Feb. 3, at 7 p.m.

Bulldog Bowl has Zags ready to hit the gridiron this Saturday

Mark Few's suspension doesn't feel like enough given his actions

GU women's rowing prepares for the season ahead after Oklahoma win