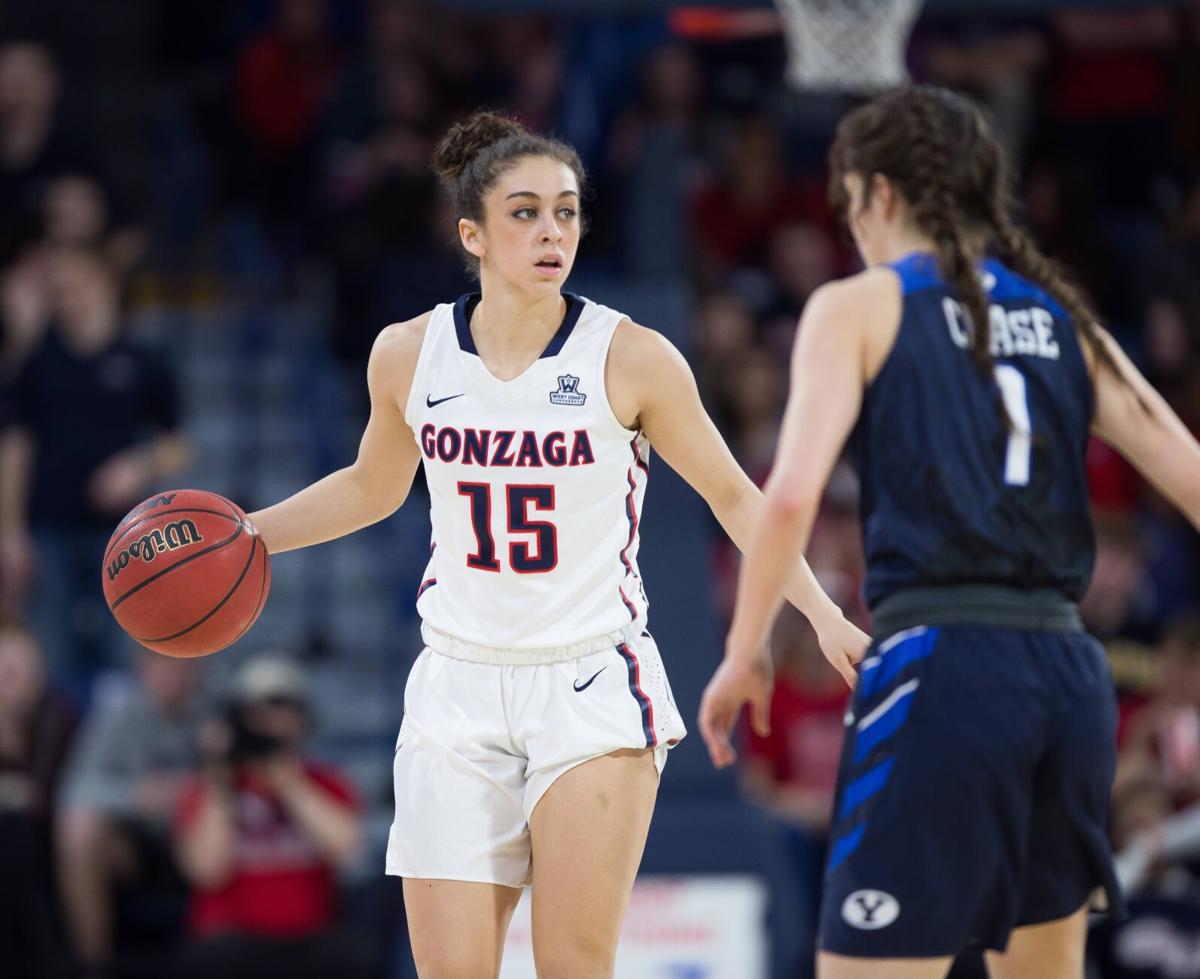 After playing for the Zags from 2016-2020, Jesse Loera will be joining Breidablik in Iceland. 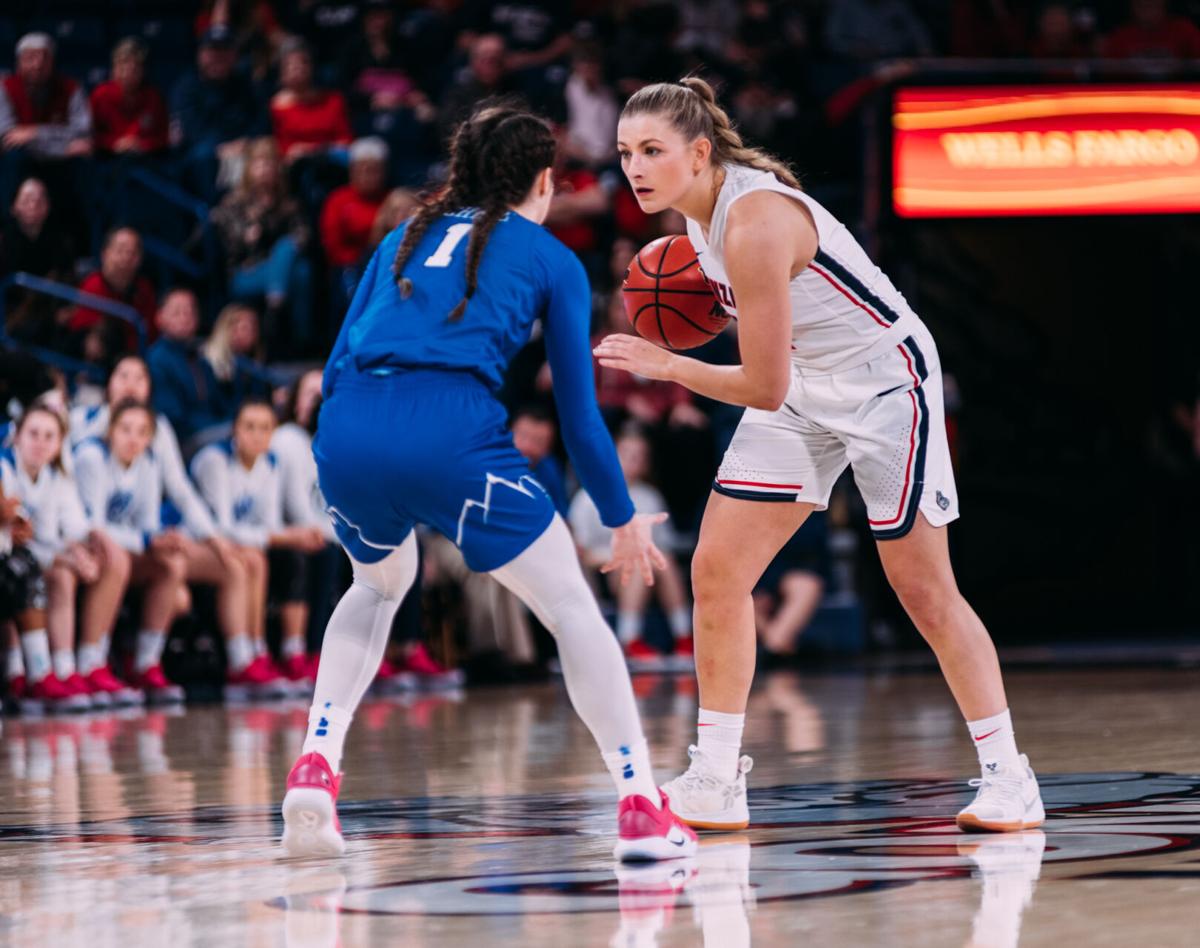 Laura Stockton played for Gonzaga from 2015-2019, she signed with Herner TC of Germany in August.

After playing for the Zags from 2016-2020, Jesse Loera will be joining Breidablik in Iceland.

Laura Stockton played for Gonzaga from 2015-2019, she signed with Herner TC of Germany in August.

For years, Zag fans have watched Jessie Loera and Laura Stockton play in the McCarthey Athletic Center. Even before they became teammates, the two former Gonzaga women’s point guards competed against each other in high school games. Now, Loera and Stockton join a hefty list of GU alumni who have moved on from the Kennel to pursue professional careers in basketball.

“I think it’s really cool how now we’re both taking that next step of playing overseas,” Loera said. “I’m excited to see what this experience will be like and where it will take me.”

In the beginning of August, Loera signed with a club team in Kópavogur, Iceland called, Breidablik. They offered her a contract fairly quickly and she is now the one American on their team.

About a month after it became official, Loera endured the endless hours of travel to Iceland to then only spend five days in isolation as per the team’s COVID-19 protocol.

She has spent some of her miniquarantine researching the new country in which she resides and is looking forward to exploring the caves, volcanos, mountains and northern lights when her schedule allows it.

“I know Iceland’s just a beautiful country,” Loera said. “I’m sure there’s more that I don’t know about, but I’m excited to see it all.”

Not only has Loera’s family always encouraged her and supported her decisions, but her teammates at GU were always there for her, too. Up until the day she left, they pushed her to be the best player she could be.

“I’m super excited for Jess,” Stockton said. “It’s been super fun to get to play with her over the years… I know what she’s about; she’s such a little fireball and I know she’s going to kill it overseas.”

Everything that Loera has learned from all of her teammates and coaches will stick with her as she begins her professional career. Even though Iceland’s style of play may be slightly different because of the faster pace, the intensity and the referees, Loera said she is ready to adapt and bring in her own unique style that Zag fans so deeply love watching.

“I might not be able to be as pesky as I used to be,” Loera laughed. “I’m excited though to be able to learn the game here and see how different it is [from] back home.”

As for Stockton, the original plan was to sign with an agent after senior year, but her season-ending injury delayed the process.  However, once she healed several months later, she signed with an agent and landed a contract with a team in Germany called Herner TC.

“This has been a goal of mine for really as long as I can remember,” Stockton said.

Like Loera, Stockton had a support system in her teammates and family, especially when she was injured. They helped her overcome any struggles and obstacles preventing her from reaching her dream and encouraged her to persevere through it all.

Though her large family of successful athletes is currently spread out across the world to pursue their careers, a close bond still remains. They stay in touch through FaceTime and when they do get to see each other, they’re filled with enthusiasm.

Since her older brother Michael has already been playing professionally in Europe for a few years, now playing in France, Stockton has had the opportunity to visit the country a couple of times and experience its culture before moving there. She knows the basics of the language and will not be completely on her own, but it is a major change from Spokane where she has lived for so long.

Before GU, Stockton played at Gonzaga Prep. She said she has always played competitively and that will not stop now. Since she played for a nationally ranked university in the country with thousands of fans in the stadium, competed in March Madness and participated in several interviews on television, the pressures of playing professionally don’t phase her.

“Being able to be put on that big stage has definitely prepared me for what’s next at the professional level,” Stockton said. “It doesn’t scare me to have more pressure. I’m used to it just because we played at such a high level at Gonzaga.”

So many years of club games, high school tournaments, March Madness, practices every day and being a student on top of it all has finally paid off for Loera and Stockton. They will soon begin their overseas careers with the support of their friends, family and Zag fans everywhere.

“It took a lot of hard work to get here and I know Laura has done a lot of stuff, too, to get to where we are,” Loera said. “I know a lot of it, though, had to do with Gonzaga and the support that we had from there, the community and the students. I’m sure she could say the same thing, that we’re very thankful for everyone who helped us get to where we are today.”