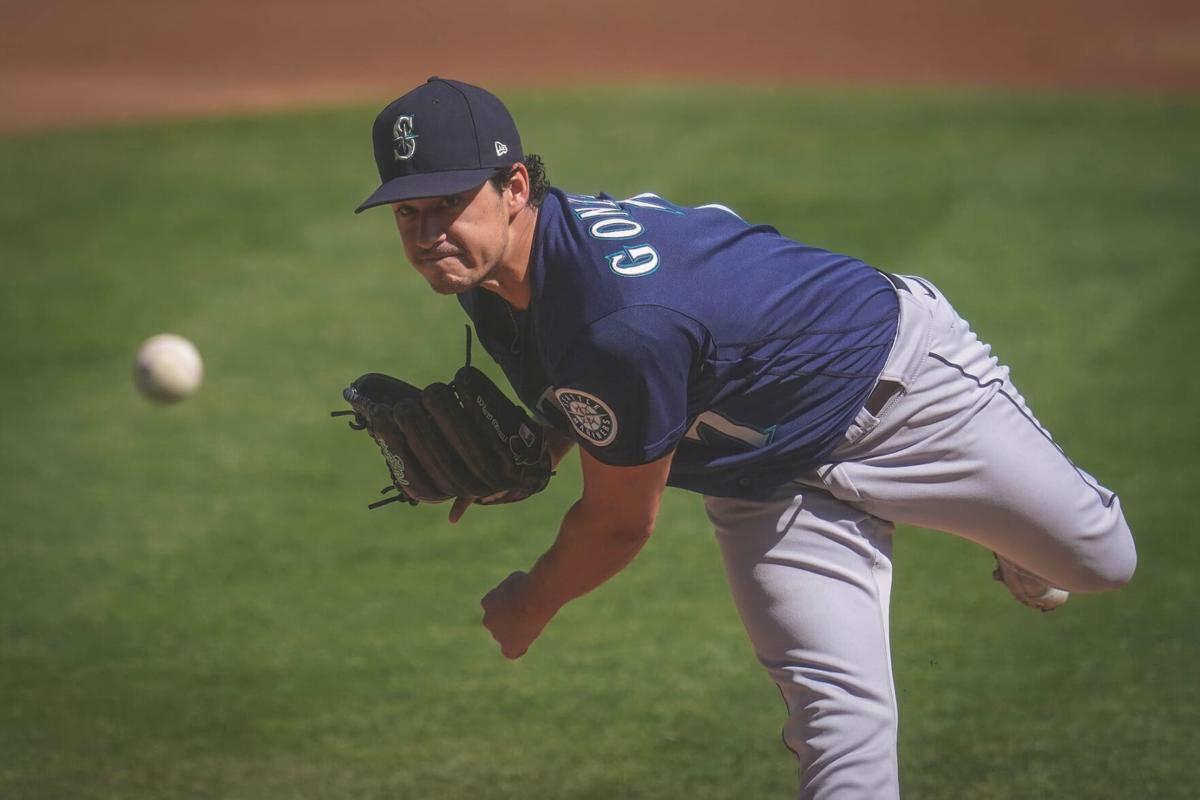 After starting a season best 34 starts for the Mariners in 2019, Gonzales won seven games in 11 starts during the shortened 60-game 2020 season. 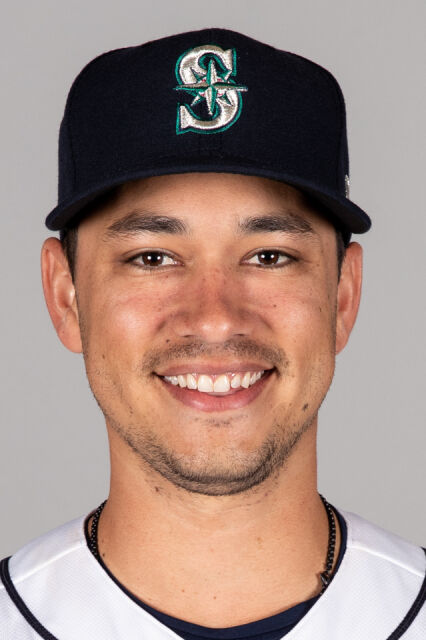 Gonzales was traded to the Mariners in 2017 from the St. Louis Cardinals.

After starting a season best 34 starts for the Mariners in 2019, Gonzales won seven games in 11 starts during the shortened 60-game 2020 season.

Gonzales was traded to the Mariners in 2017 from the St. Louis Cardinals.

Marco Gonzales’ ensuing greatness should’ve been evident during his junior year at Gonzaga in 2013, when he received WCC Co-Player of the Year Award along with University of San Diego’s Kris Bryant for the second time in his three year college career.

Those who didn’t buy a ticket onto the Gonzales hype train seven years ago should certainly start lining up now because the 28-year-old left hander from Fort Collins, Colorado, has cemented his position as one of the American League’s (AL) elite starting pitchers. Gonzales is coming off his second consecutive season as the Seattle Mariners opening day starter and most valuable pitcher, as voted on by Seattle sports writers, but the trajectory for his career indicates that his progressing style of play will ascend Gonzales to even greater levels of recognition in the coming years.

It would be challenging for anyone to argue that Gonzales should be this season’s undisputed AL Cy Young Award winner, with top flight aces like Shane Bieber and Gerrit Cole posting MLB highs in wins and ERA (earned run average), which are stats that carry significant weight in the eyes of award voters. But Gonzales’ postings in those respects weren’t too far off; he compiled a career best 3.1 ERA through 11 starts which ranks as eighth among qualified AL starters, and Gonzales finished in a second place tie for AL wins with Gerrit Cole at seven.

Both of these numbers, which are laudable under any circumstances, should be contextualized by stating that Gonzales did this for a team whose other pitchers combined for a 20-31 record and even including Gonzales’s numbers, put up a team ERA of 5.03 which ranked sixth worst in the entire MLB.

“He’s doing everything you could ask for from a front-line starter, other than the fact it’s not Gerrit Cole throwing 98 mph,” Mariners manager Rick Servais said to ESPN. “At the end of the day, it’s a do-good league. You do good, you should keep playing and you should get noticed. And there’s not many in the [AL] that have done it better than him this year.”

Gonzales’s primary pitch is a sinking fastball that tops out in the low-90s and he doesn’t rack up the big strikeouts numbers every start like Cole or Trevor Bauer have been able to do, as Gonzales’s career best 8.3 strikeouts per nine innings this season hangs below the 2020 league average of 9.1. But the miraculousness of his game isn’t necessarily engendered by the consistency at which his pitches avoid swinging bats, but rather by the number of runners that Gonzales can keep off base.

Despite posting fairly pedestrian figures in his strikeout numbers, his strikeouts per walk average of 9.14 was comfortably the best in the major leagues with the second best posting in this category coming from the Houston Astros’ Zack Grienke with a 7.75. That categorical domination is a product of Gonzales’ ability to mitigate self-incurred damage, as he dually conceded an MLB low of seven walks total throughout his 11 starts this season.

“He doesn’t beat himself by putting extra runners out there,” said GU head baseball coach Mark Machtolf, who coached Gonzales during his playing days at the university. “We always teach our kids that offensively, we’re trying to win the freebie award, base on balls, hit by pitch or things that you don’t necessarily have to do a lot in order to win that war. Marco wins that war as a pitcher every time because he’s attacking and making the other teams beat him instead of digging a hole for himself.”

Since his days as a Zag, Gonzales has demonstrated a particular acumen for keeping freebies to a minimum, and this season he added to that asset by additionally keeping competent hitters from producing when they stepped in the box. After posting a WHIP (walks and hits allowed per inning) between 1.2 and 1.75 during his first four years in the league, Gonzales stepped up this season with a .947 WHIP that ranked third in the AL, demonstrating the composition of a pitching approach is able to keep all batters off base.

This efficiency is derived from a honed ability that Gonzales has to locate his complete arsenal of pitches precisely where he plans to. Out of his secondary pitches, Gonzales defers to his recently developed cut fastball most frequently as he throws that pitch 24.3% of the time. But his other two pitches aren’t just cannon fodder, his curveball produces the highest whiff rate and the highest putaway rate out of any of his four pitches, and his changeup —although thrown least often — has been a reliable part of his game since college.

“He trusts his stuff more; his changeup has been a pitch that he can go to anytime because it’ll always be there, but he hasn’t needed to throw it as much since his other pitches have developed,” Machtolf said. “The fact that he’s attacking hitters totally differently than he did at Gonzaga or when he first got to professional baseball is interesting. He did kind of reinvent himself, and to see where it’s going to take him is going to be exciting to watch.”

This reinvention of his strategic approach will lead Gonzales to ever-more fervent horizons as his career advances, and to be willing and able to redefine your approach as an athlete mid-career demonstrates a capacity for greatness that Gonzales has held since before he even got to GU.

His nickname among his Mariner teammates is “The Bulldog,” befitting of a former Zag, but also of someone who is willing to fight tooth and nail for an opportunity to better themselves like Gonzales is. Because while his technical approach has become increasingly more dynamic and effective, Gonzales’s mental approach on the bump has never wavered, and that is the impetus of his success so far and going forward.

“His presence, composure and competitiveness on the mound is unequalled in my opinion,” Machtolf said. “You could see that when he was in high school and when he first got to Gonzaga, it’s something that he’s gifted with.”

Now the rest of the baseball world is seeing the value in Gonzales’s impervious mentality that Machtolf witnessed while recruiting him. After Gonzales appeared in 34 starts for the Mariners in 2019, which was an MLB record for that season, Seattle promptly signed him to a four-year, $30 million extension in February before the 2020 season got under way.

It only took Gonzales demonstrating exemplary durability in 2019, profound command of his game in 2020 and the characteristics of an upstanding teammate and competitor throughout his entire career for him to begin to receive the recognition that he deserved, but “the bulldog” is finally garnering his respect as one of the MLB’s best.

“Since joining the Mariners, Marco has been a model of consistency, quietly ranking among the most productive starting pitchers in the AL,” Mariners general manager Jerry Dipoto said in a statement after his club signed Gonzales to the extension. “His presence, competitiveness, preparation and leadership make him a key part of our future.”