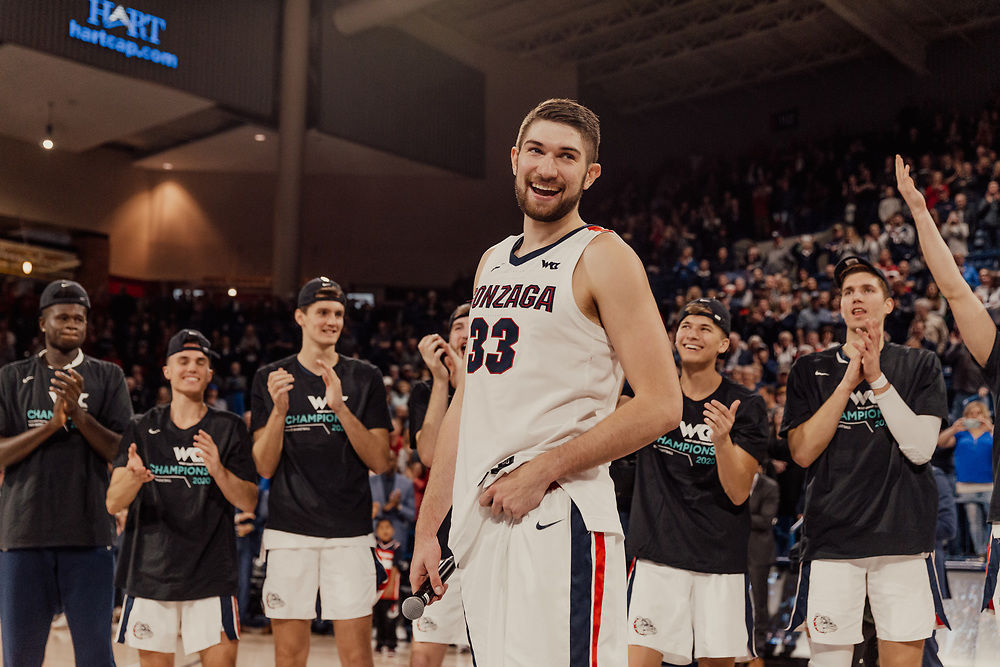 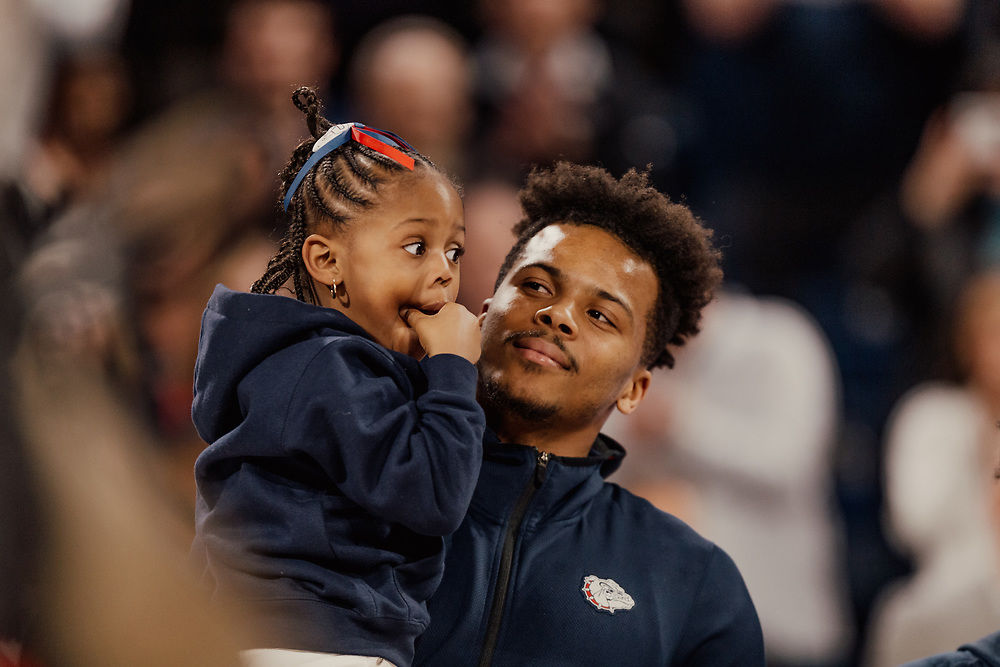 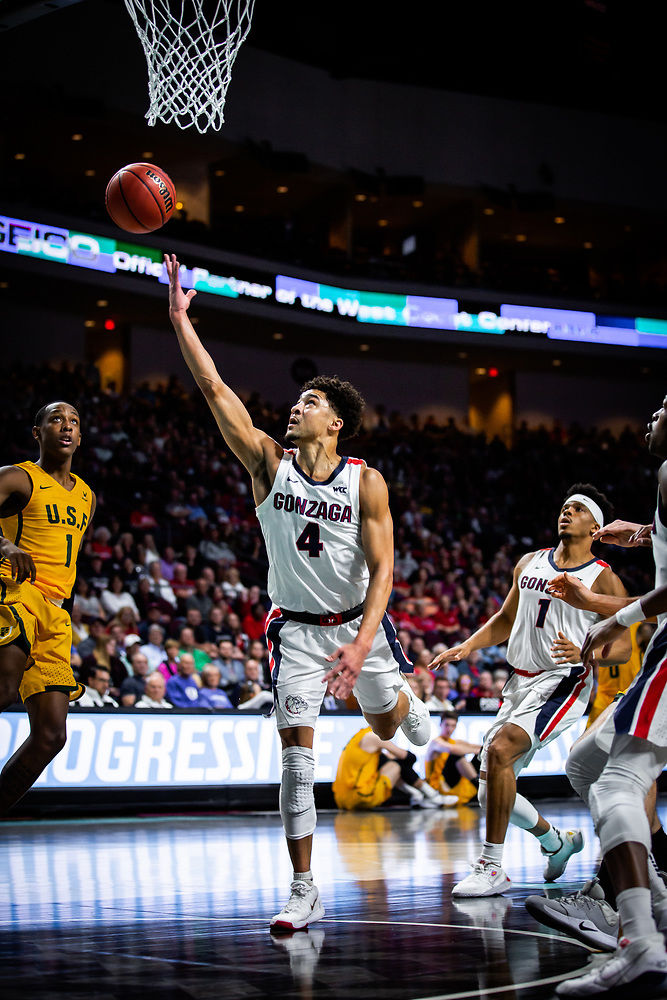 Gonzaga senior forward Killian Tillie sauntered down the hallway inside Orleans Arena, knocked the white West Coast Conference Tournament championship hat off his noggin, scooped it up and jogged toward the locker room.

As he passed a fleet of media members, he extended them a hello, waving and smiling, moments away from stepping foot into a closed-door celebration punctuated by head coach Mark Few’s customary handstand.

The purity of sports is the natural emotions they yield. On this day, the Frenchman radiated joy, brought to him by a game that’s presented so many hurdles and opportunities for sadness or frustration in recent years. But all of the injuries and setbacks dealt his way did not invade his stream of consciousness that evening.

To finally secure the national championship trophy that barely eluded him as a freshman. To compensate for the hip pointer that sidelined him in the Sweet 16 loss against Florida State as a sophomore. To wash away the pain and disappointment of an injury plagued junior year, which relegated him to just 11 minutes in the Elite Eight loss to Texas Tech.

And then, fewer than 41 hours after his jubilant jaunt through the Orleans Arena tunnel, any storybook conclusion ceased to exist.

In response to the nationwide COVID-19 outbreak, the NCAA Tournament was canceled Thursday afternoon. Full-stop. Not a postponement; the whole shebang was over. Just like that, Tillie’s collegiate career came to a screeching halt. No redshirt season to exhaust. Not another year of eligibility to lean on and guide him through the heartbreaking news.

Everyone inside GU’s locker room has a right to be crushed about the announcement. I’ve not spoken with any of them, so I won’t assume how they’re feeling, but I can respect any of the emotions they’re navigating. For many, last Tuesday’s game against Saint Mary’s was their final one in a Bulldog uniform. Some, such as Ayayi, sophomore forward Filip Petrušev and junior wing Corey Kispert, could turn pro. Others, Tillie and graduate transfer guards Ryan Woolridge and Admon Gilder Jr., do not enjoy the luxury of choice. Their time as Zags has expired.

Really, those three — along with senior managers Adam Davidoff, Zach Wheeler, Colin Kirk and Mac Graff — are who my mind fixated on when I read of the decision to cancel March Madness. They were blindsided by an outcome independent of their actions, which closes the door on a program they value so deeply.

Woolridge wraps up his career without a single NCAA Tournament game on his resume. He transferred to GU in large part to experience a deep run and rehabbed tirelessly during the offseason following a stress fracture in his patella last year. Because of the surgery, he was not fully cleared until mid-September and could hardly plant or cut on that leg until then. Despite those factors, he left a lasting imprint on GU’s storied point guard position.

His voracious perimeter defense, long-range shooting (43.2% from 3) and turbo-boosted speed steadied the floor general spot once thought to be a massive hole in the starting five after fifth-year senior Josh Perkins graduated last spring.

“There’s a lot of things thrown at him and he’s just handled it with grace, humbleness, unselfishness,” Few said following a win over San Francisco on Feb. 20.  “He’s arguably our best perimeter defender, so we’re leaning on him on both ends as hard as we’ve leaned on any guard that I can remember.

Due to blood clots, Gilder sat out all of last season at Texas A&M. Before the diagnosis and plan of recovery were specified, he worried the clots might paralyze him. This season, he didn’t establish his footing until after the turn of the new year but emerged as a dynamic transition scorer, barrel-chested on-ball defender and reliable outside shooter.

Oh, and he’s the father of a 4-year-old daughter, Kailey Nicole Gilder, whom he rarely saw in person during the season. Watching her wander through the locker room on Senior Night in search of her dad was a moment so rich with humanity that professionalism among media was hard to maintain. Any time he speaks about her, his eyes twinkle and his tone perks up. Gilder is passionate about the sport but it doesn’t come close to approaching the love he has for his daughter.

“Those two grad transfers have been so good for us, just with how they’ve assimilated, how humble they’ve been and how easy to coach,” Few said. “They’ve made sacrifices and we really are in debt to them for that.”

I covered Tillie for three seasons. He is often beaming with happiness and recognizes when his soundbites are dry, often accompanying them with a smirk or a chuckle. His humor and lighthearted nature headline his off-court personality.

His demeanor in Las Vegas was different, though. It was not the same level of joy he constantly exudes. This was distinct. He was happy, not just about life or the sport itself, but about the impending possibilities ahead of him in the postseason.

He grinned for much of last Monday’s postgame presser, he cut down the net Tuesday and crowned Ayayi with it before sharing a handshake, a smile and a hug. When Ayayi singled out Tillie for his guidance and friendship during an interview Tuesday, Tillie interrupted with a sarcastic, “Aw, stop. Stop it, man.” This man was genuinely blissful about the potential to make good on years of frustration and struggle.

All that optimism is irrelevant at this stage. The table is no longer set for Tillie to extinguish the heartache and cash in on the physical toll he’s endured. There will be many fond moments etched into his Zag-themed memory bank but also a lot of pain that might never have been truly worth the cost.

Every collegiate athlete’s tenure concludes before they’re ready. Saying goodbye to a community that embraces you is always bittersweet. Usually, though, it comes with a warning sign. Any time you step onto the floor in the NCAA Tournament, you are cognizant it could be the last game you play. That does not apply for Tillie — or any of the program’s seniors, whose time was cruelly short-circuited without warning.

Tillie bounded off the Orleans Arena court, invigorated and primed for his final climb to the March Madness summit, unaware of the impending anguish before him.

He’ll exit The Kennel doors with three Sweet 16s, two Elite Eights and one national title cameo; he played rotation minutes in all of those games aside from the 2018 Sweet 16, which he missed due to injury. He is a career 44.4% 3-point shooter, two-time all-conference member and Most Outstanding Player of the 2018 WCC Tournament.

As a freshman, he knocked down a pair of free throws to seal the 2017 Final Four game against South Carolina and advance GU to its first national championship appearance. He battled through countless lower body ailments during his final three years, never allowing them to break his spirit or eliminate his smile.

“He’s resilient. He’s always gonna get back up,” former teammate Josh Perkins said. “He’s a fighter. I love that dude. He truly is one of the greatest Zags to put a uniform on.”