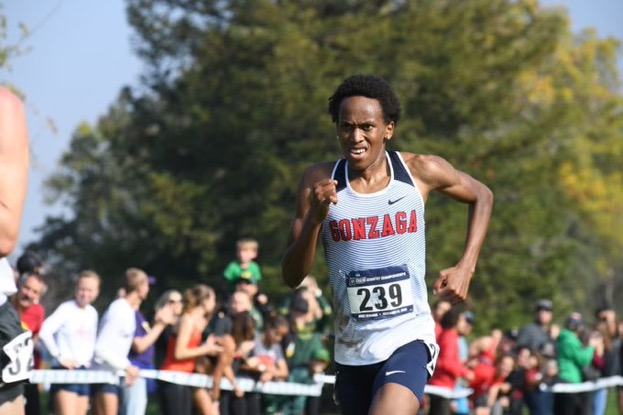 Mwaura topped his own program-record in the 10K, completing the race in 29:35.2. 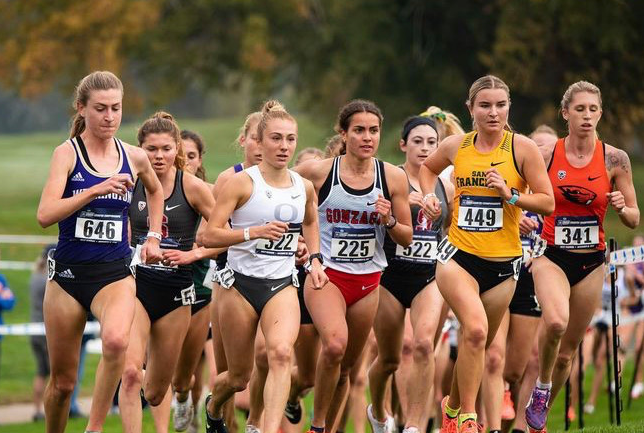 Kristen Garcia (225) set a program-record after completing the 6K in 20:03.2 and finished third overall.

The Gonzaga University men’s and women’s cross-country teams toed the line for the west regional cross-country meet in Sacramento, California.

The regional meets serve the purpose of a qualifier event for the national meet that will take place on Nov. 20 in Tallahassee, Florida.

Evan Bates and Cullen McEachern led the Zags through the first mile in 4:46 as Kyle Radosevich, Dominic Arce and Riley Moore were mere seconds behind. Mwaura was absent from the top group, going out in a conservative 4:48 first mile and running in 48th position at the first mile mark.

Through 1.5 miles, the elite runners of the west region began to assert themselves. Oregon’s Cooper Teare surged past 32 runners and ran in second for the majority of the first third of the race. GU's Wil Smith employed a similar tactic, hanging back for the first mile before moving up 21 places to run in the top 10 group of men.

Halfway through the 10K in one of the most competitive regions in the country, Mwaura made his presence known. After laying in wait for the first half of the race, Mwaura showcased his world class fitness and moved up 40 places into the 6th place position at the halfway mark of the race. Mwaura’s 5K time was 15:01 at the halfway mark.

"For me personally, I ran a respectable race given the circumstances," Mwaura said. "We would’ve like to place higher than we did but it is what it is."

The top 24 men were separated by a slim two-second margin with 2.5 miles to go in the race. As a team, the Zags hung around 4th place, trailing Stanford, Washington and Boise State with Oregon hot on their heels. GU had four runners in the top 25 with Smith, McEachern and Radosevich pushing the pace. In a meet as large as this one, GU's depth was put to the test, as UW had 7 runners in the top 25 at the 3.6 mile mark.

The top five group of men continued to churn their legs and sear their lungs with less than a mile remaining in the race. Mwaura worked himself into third place, trailing the leader by .2 seconds as he surpassed Teare.

The Zags were without standout underclassman Yacine Guermali who is likely out for the rest of the cross-country season with an undisclosed injury.

The Bulldogs placed 5th as a team with 107 points, seven behind 4th place Oregon. Stanford won the meet followed by Washington and the University of Portland.

"So proud of this team," Tyson said via GU Athletics. "They battled hard against big time ranked programs and they endured."

The top two teams in each race automatically qualify for nationals. At-large berths are determined by a committee that examines criteria such as regional finish, points against teams already in the championship and top individuals on the team under consideration among other factors.

Like the men, the women’s team sought to build upon their runner-up team finish at the West Coast Conference (WCC) championship.

The GU women collectively went out conservatively, with Elisabeth Danis, Liz Hogan and Kristen Garcia running the first mile in a tight group in 5:33.

As the race progressed, Garcia made a massive move between the first and second mile, surging 21 places to run in the top group comprised of eight women.

Among the eight were familiar WCC foes Ruby Smee from USF and Anna Pataki from Portland.

Garcia remained steady halfway through the race as Danis and Rosina Machu established themselves as the Zags chase pack in 29th and 37th, respectively.

With half a mile remaining in the 3.7 mile race, Garcia remained firmly in contention, running in a group with Alessia Zarbo of Oregon and Smee of USF chasing leader Julia Heymach of Stanford.

Garcia managed to whittle the nearly eight second gap between her and Heymach to two seconds with an astonishing kick. Garcia surpassed Zarbo to finish third overall in 20:03 (5:23/mile) with the fastest 6K time ever recorded by a Gonzaga woman.

Danis, Anderson, and Tuckwood had record breaking performances of their own, with their 6K times slotting in at the 7th, 9th and 10th best times ever recorded in program history, respectively.

As a team, the Zags placed 4th overall with 148 points besting conference rivals Portland and USF and only trailing Stanford, Washington and Oregon, respectively. The 4th place finish marks the highest finish ever for the program at the west regional.

Now, the Zags will anxiously await the results of the D1 NCAA cross-country selection show on Nov. 13.

A total of 18 teams automatically qualify for the championship races while 13 teams are selected as at-large participants for a total of 31 teams.

A total of 36 individuals will automatically qualify for the championship races by being one of the top four regional finishers not on a qualifying team. The committee will then select two additional individuals for at-large consideration for a total of 38 individuals for each gender.

The meet will be held in Tallahassee, Florida on Nov. 20.

Tommy Conmy is a staff writer.

Men's basketball beats No. 2 UCLA by 20 to win Empire Classic

Timme scores 25 as No. 1 Zags blow by Bellarmine in The Kennel