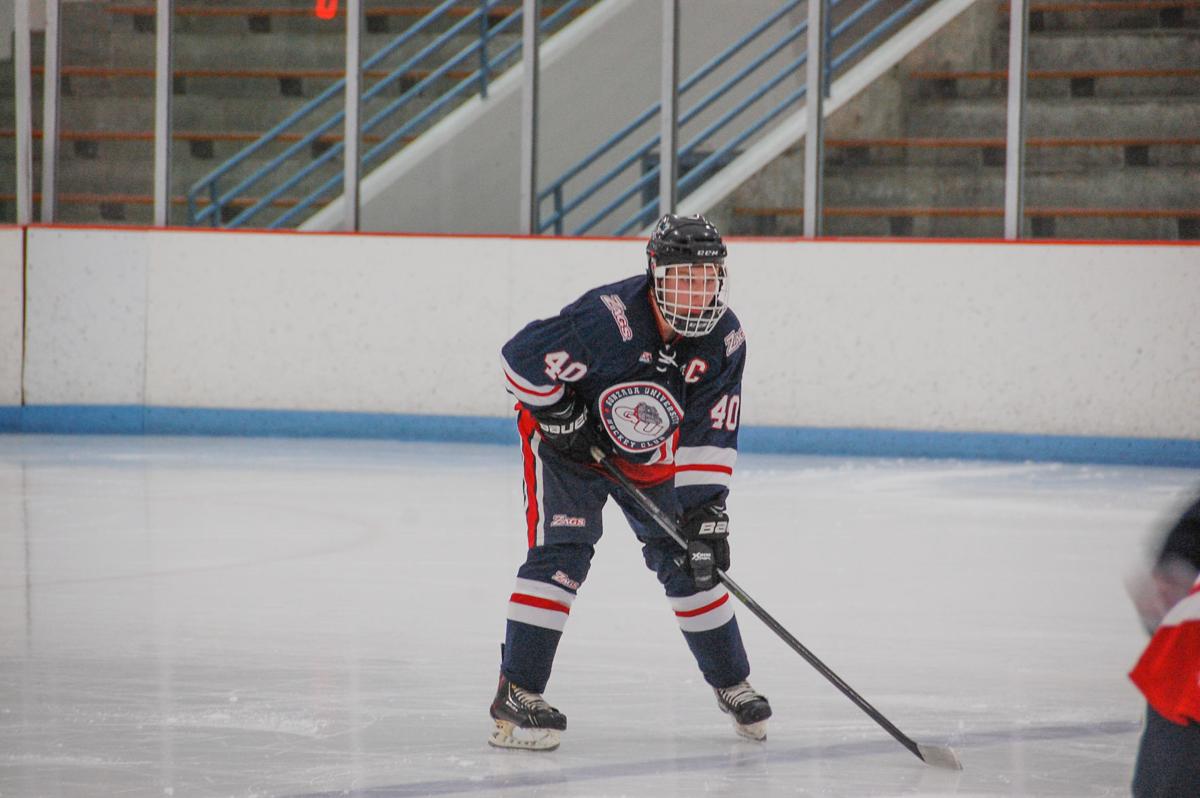 GU ice hockey home games are some of the most well-attended club sports events on campus.

The Bulldogs' first home game is still in the works, but it's planned to be held the first weekend of November or December.

GU ice hockey home games are some of the most well-attended club sports events on campus.

The Bulldogs' first home game is still in the works, but it's planned to be held the first weekend of November or December.

If there’s one experience that sports fans at Gonzaga can’t miss, it’s cheering on the Bulldogs at a club ice hockey game. Out of all of GU’s many club sports, hockey is one of the most attended events by students.

The team plays off-campus at Eagles Ice Area located on 6321 N Addison Street, but yet every game is still packed with nearly 100 students. Fans watch from right along the boards, getting an up close and personal view of the action. Hockey games are rowdy, enthusiastic, and loud.

“I remember for our first game last year we were expecting a couple dozen people, just close friends and all, but when we walked out of the locker room the whole building was completely full and just going crazy already,” said player Tim Mills. “It was so cool.”

GU’s ice hockey club is a Division 2 team that takes on schools such as University Of Washington, Eastern Washington University, Portland State, Montana State, Washington State University, and the University of Idaho. There are about 20 games scheduled this season, including eight home games.

Hockey is a fast-paced and high energy sport, making it undoubtedly one of the most exciting to watch. Just like in the Kennel, Zags get really involved at the Eagles Arena, cheering loudly, banging on the glass, and having a great time.

“Last year there was not one home game that it wasn’t super loud. Everyone just goes crazy. Its super fun to play and it gives you a lot of extra energy,” said Mills.

The team has been lacing up their skates for over a month now in preparation for the upcoming season. Late night practices test the player’s passion for the game, starting at 9:45 p.m. and lasting multiple hours into the night.

These practices are led by GU alumni Dylan Schwartz and Oscar Marmolejo, who also played for the hockey team from 2009 to 2013. Marmolejo played center and Schwarz was goalie. They have been serving as the interim coaches since the beginning of last season.

“We are actually hoping to be able to start a booster club for the GU hockey club team which will then allow the team to hire some more experienced coaching staff and grow this program to establish a greater Gonzaga student body and Spokane presence” said Marmolejo. “I would love to see a Gonzaga hockey rink built in the next 20 years.”

The players and coaches are optimistic about the upcoming season, with talented juniors and seniors and lots of new freshman coming in with speed and skill. This season, the team is large with two goalies and over 16 players and counting, as the freshman get their gear and join the rest of the team on the ice.

According to Coach Marmolejo, the biggest challenge the team faces this season is the overall body size of the team, so they will have to use their strengths to adapt for playing against bigger players.

Most of the players have many years of hockey experience from playing throughout their childhood and in high school. Joining the hockey team is an opportunity for these students to continue playing a sport they love while earning degrees.

“We are all here for academic reasons and everyone has that understanding. You know, school first. As an engineering major it can be kind of hard at times to handle both, but it’s been a great group of players my whole time here. It’s nice having friends that aren’t necessarily in your classes,” said senior Michael Gasser.

Mills said that it’s the mutual love of the game brings the team together.

“There’s never a dull moment with those guys. We are from similar backgrounds and have similar interests, so it’s really easy to get along with them,” said Mills.

The annual alumni game is coming up this weekend at the Eagles Ice Arena on Oct. 12 at 2 p.m. GU will host Santa Rosa Junior College at Eastern University on Oct. 18. The schedule is still being determined while the team tries to find more home games and new competition. Right now, students have time to prepare to cheer on the Bulldogs at the first home game this season, which will be held the first weekend of November or December.

Cara Konowalchuk is a staff writer.