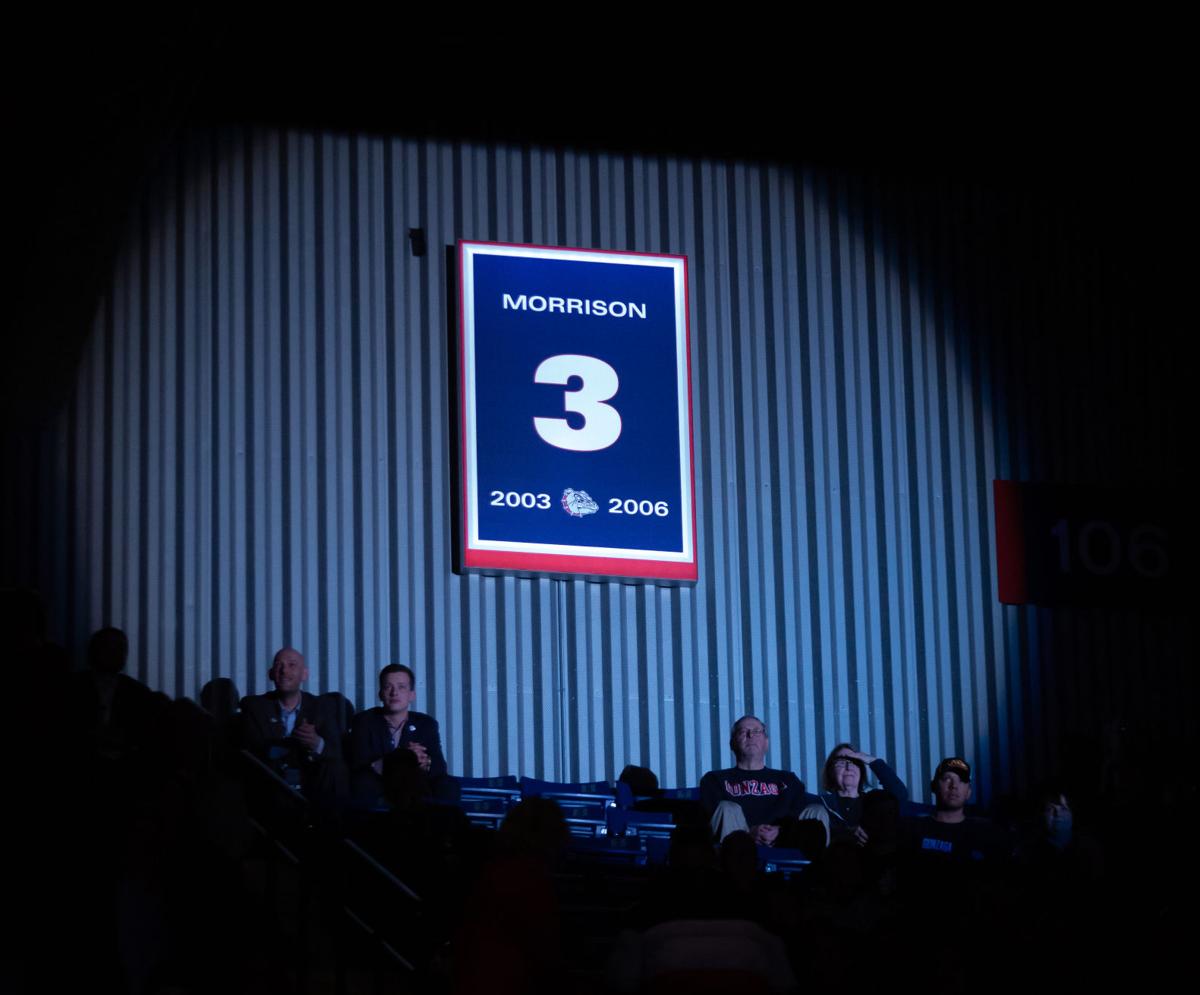 A tribute to Adam Morrison prefaces Gonzaga's game against USD. 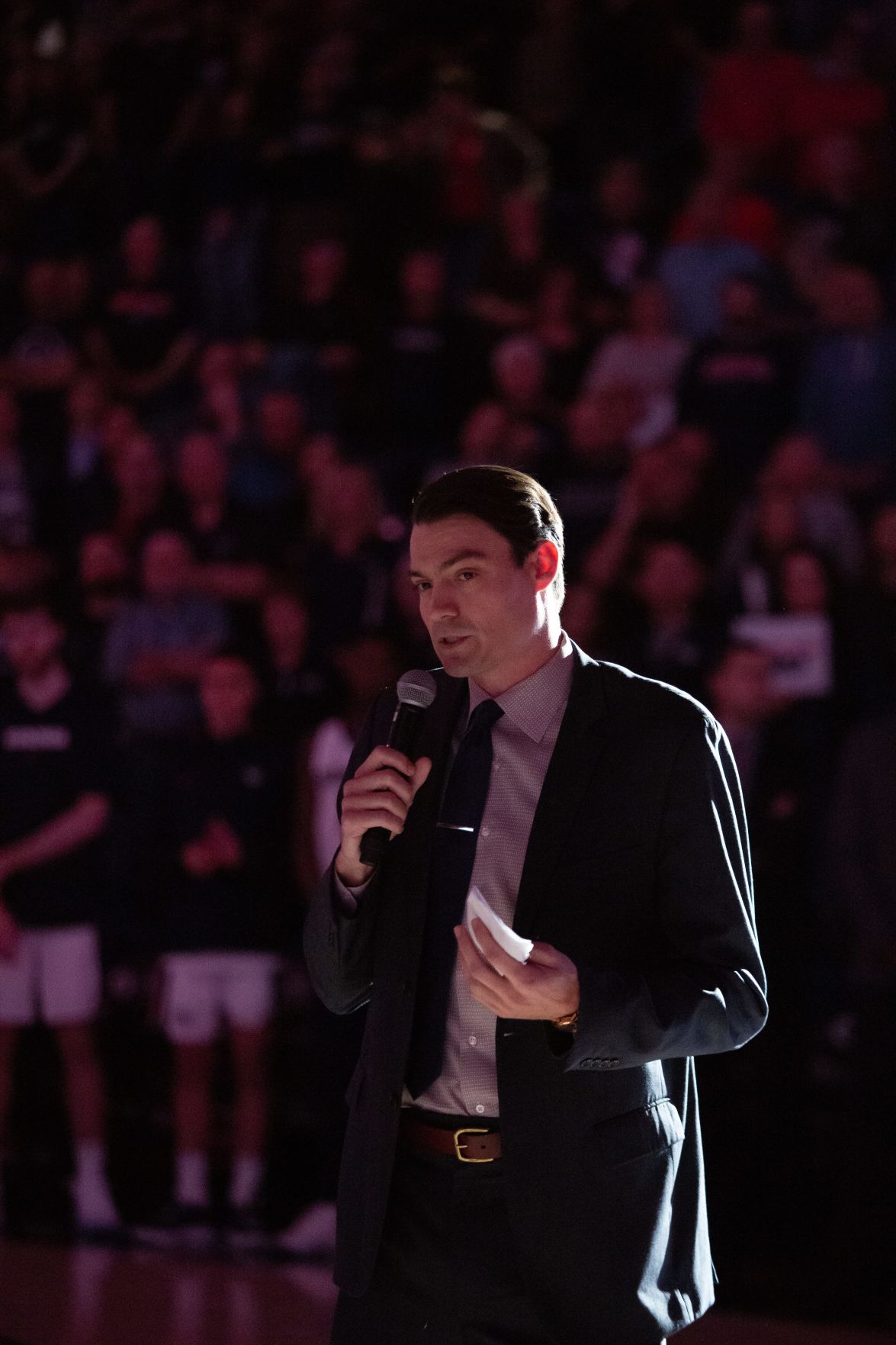 Adam Morrison speaks to the crowd during his tribute.

A tribute to Adam Morrison prefaces Gonzaga's game against USD.

Adam Morrison speaks to the crowd during his tribute.

Three is his number. Three years, three seasons, third highest points scored in a career and the number printed across his jersey. Beginning tonight, Adam Morrison’s jersey will hang in the McCarthey Athletic Center in the rafters alongside GU men’s basketball icons, Frank Burgess and John Stockton.

The Kennel was the backdrop for Morrison’s three-year undergraduate career as a power forward for the Bulldogs. In 2006 at the height of his collegiate basketball career, he was considered one of the best players in the country.

Morrison forwent his senior year after the heartbreaking loss to the University of California at Los Angeles during the Sweet Sixteen. In the 2006 game, Morrison led the Zags by 24 points and in the last seconds of the game the Zags’ lead slipped from beneath them and left Morrison to collapse on the court in defeat.

Tonight, he thanked the group of people who helped him before and after his time at GU.

“On a personal note, when I was done playing basketball, [it] wasn’t a very fun thing for me,” Morrison said. “And Glenn invited me back to coach and gave me the opportunity to fall in love with the game.”

Lloyd and Morrison met before his career at GU. Lloyd was a student teacher at Mead High School while Morrison was in the ninth grade. The first time they met, Lloyd was in a fight with a student on the court during open gym, Morrison said.

“Tommy … I appreciate you,” he said. “You always had my back. You were the guy when I was here that kept me from going over the edge a few times.”

He also thanked Few for their friendship that has developed over the years, through moments where Morrison proved Few wrong in Maui and allowed him to be himself.

“His junior year, him and J.J. [Redick] were just putting on a show,” Head Coach Mark Few said during the ceremony before the game against University of San Diego. “It was absolutely must-see TV.”

He holds the third highest career points record, scoring 1,867 points in the three seasons he played as a Zag. In 2006, he led the country in scoring, averaging 28.1 points a game.

“It was one of the most amazing things that I have been lucky enough to be a part of,” Few said. “Amen to that.”

After being selected as the third overall pick in 2006 NBA draft by the Charlotte Bobcats, he continued in South Carolina for three years, until traded to the Los Angeles Lakers where he saw little time on the court and then spent time abroad and attempted to rejoin the NBA.

“What I’m most proud of is the man he’s become now,” Few said. “A parent, a guy who’s really really really given back to our community. And it’s been amazing to watch him from that skinny, floppy haired kid in Mead High School, all the way through his Gonzaga years. He’s also a guy who after he finished his NBA career, he came back and graduated and here.”

In 2015 Morrison returned to GU to receive his master’s degree in sports management. When he returned to GU, it was a dark time for the out of the league player. A time he credits his four coaches on and off the court for helping him out of.

While he sported No. 3 throughout his career at GU, now forward Filip Petrusev dons the number.

“Coming in I didn’t know much about him, and just being able to learn all he’s been through and all the people that have impacted his life and helped him get to where he got, was so special,” Petrusev said. “Wearing this number, I feel like is an honor, but also a responsibility. I want to live up to the standard.”

The 35-year-old lives in Spokane again with his girlfriend and three children and hosts the team’s radio show.

“When I left Gonzaga, I had a great career obviously, but I always felt a little bit of a regret that I didn’t have a senior night, and I truly mean that,” Morrison said. “I never got to publicly thank the Spokane community and fans who supported me, and people around town. … It wasn’t fashionable to be an Adam Morrison fan, so I wanted to thank you.”

With his name in bright LED lights and his own hype video centering McCarthey, Adam Morrison had his own senior night, just a few years late.

Arcelia Martin is a copy editor.