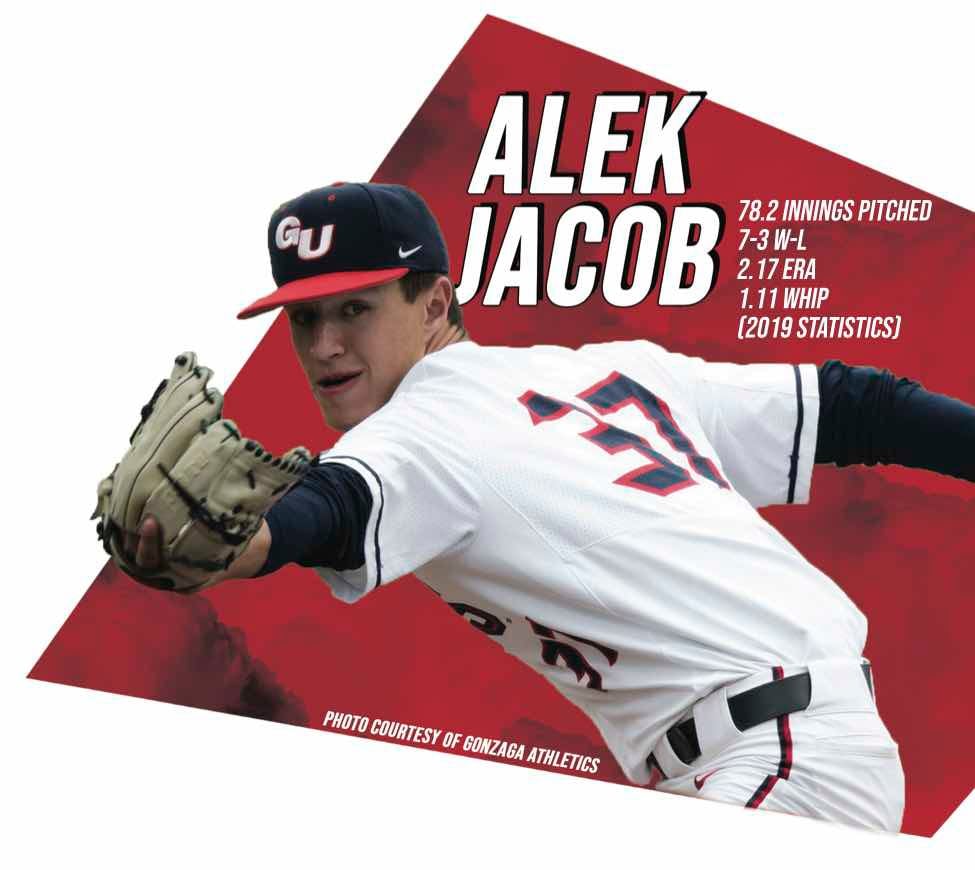 Alek Jacob has been named a Perfect Game Preseason All-American before his junior year. 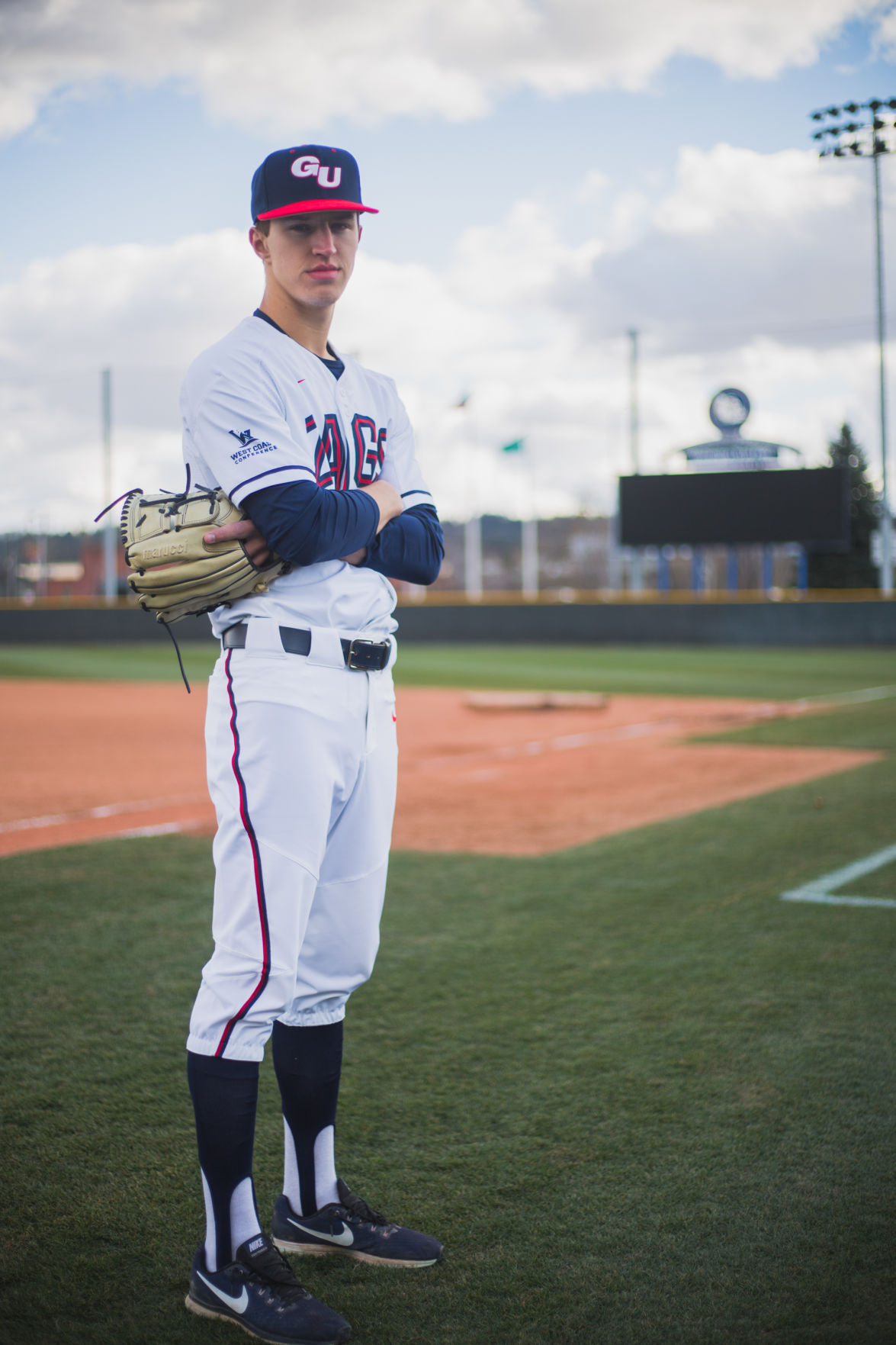 As a freshman, Alek Jacob didn't think he would start. Now he's Gonzaga's No. 1 guy.

Alek Jacob has been named a Perfect Game Preseason All-American before his junior year.

As a freshman, Alek Jacob didn't think he would start. Now he's Gonzaga's No. 1 guy.

Jacob said that during his freshman year, he never thought he was going to start. Coming out of North Central High School in Spokane, he expected to spend the season following in the footsteps of fellow Spokane product Wyatt Mills and pitch strictly in relief.

Even then, his teammates and coaches saw physical and mental gifts that would quickly set Jacob apart.

“I just remember during his visit ... I was like, ‘This kid's gonna be pretty good,’” said Mac Lardner, a senior pitcher and fellow starter. “His hips are crazy flexible. He has huge hands … he's a starting pitcher, which is really rare for a sidearm guy. So, it just gives the hitters a completely different look.”

That unorthodox, low, sidearm pitching arsenal soon became a staple in the starting rotation, and he kept winning games. Seven, to be exact, with a 2.88 ERA in 103 innings.

An All-WCC nod followed, and the hype began.

Jacob himself doesn't necessarily buy into it all — he said the individual recognition doesn’t mean as much to him as team accomplishments. But in the same sense, he knows what he is capable of.

“He's unique,” said Brandon Harmon, pitching coach for the Zags. “He's very skilled in his uniqueness. But his biggest attribute is that mentally, he believes he's really good.”

Last year, he proved his breakout season wasn’t a fluke, pitching 78.2 innings in a hybrid of starting and relieving — many of them in important matchups when the team needed momentum, according to Harmon.

“It was always high-pressure and he rose to the occasion,” Harmon said. “Man, he's impressive that way.”

In 25 games pitched, he improved to a 2.17 ERA and 7-3 record, despite the heavy usage, along with making another All-WCC team.

“It's just such an advantage to have a guy like A.J. to go seven, eight, nine innings every weekend,” Lardner said. “He bounces back really quick. If we need a start from him on a Friday or Saturday and we go deep in a tournament, he'll be out of the pen Sunday or Monday.”

Entering his junior year, Jacob was named a Perfect Game Preseason All-American, one of four GU players in program history to receive the honor. The last three GU pitchers to receive the honor — Casey Legumina, Jeff Bohling and Marco Gonzalez — all were eventually selected in the MLB Draft, something that could also be a reality for Jacob after the season if he continues to improve.

But as he’s said before, individual accomplishment doesn’t mean as much as other, loftier goals.

“It’s cool to get recognized, but that's obviously just completely based off last year,” Jacob said. “So, it's kind of in the past.

“Really this year, my whole goal is to make it to Omaha [Nebraska, the location of the College World Series], to make as far as we can as a team. Our team accomplishments are way bigger than individual accomplishments.”

Jacob is poised to be just one piece of a bullpen that Harmon and Lardner both said is among the deepest they’ve seen at GU.

Moving back into a pure starter position as the Bulldogs’ No. 1 guy will provide more stability and a mix of looks for the staff, Lardner said.

Last summer, Jacob chose not to play for a team in the Cape Cod Baseball League in Massachusetts, instead opting to focus on rehabilitation and physical training, adding more strength and athleticism to his game. Without the ability to actually pitch due to an injured latissimus dorsi from the end of last season, he focused on everything else he could possibly do.

“It was just about getting more athletic, getting stronger, putting on weight,” Jacob said. “All the little things. I couldn't really work on anything baseball related, so there's all the things outside of that that I could do to make myself a better pitcher.”

Even with a bigger role and a summer preparing to fill it, that doesn’t mean wins are going to come any easier. With the recognition and respect comes the typical truism of the target on his back.

“Alek knows just as well as anybody that he's going to get everybody's best shot,” Harmon said. “He's not sneaking up on anybody.”

Regardless, Jacob welcomes the challenge and everything it entails — specifically matchups with other teams' best pitchers.

“I like just going out there and facing that,” he said. “Like, give me your best shot and I can show what I can do against you.”