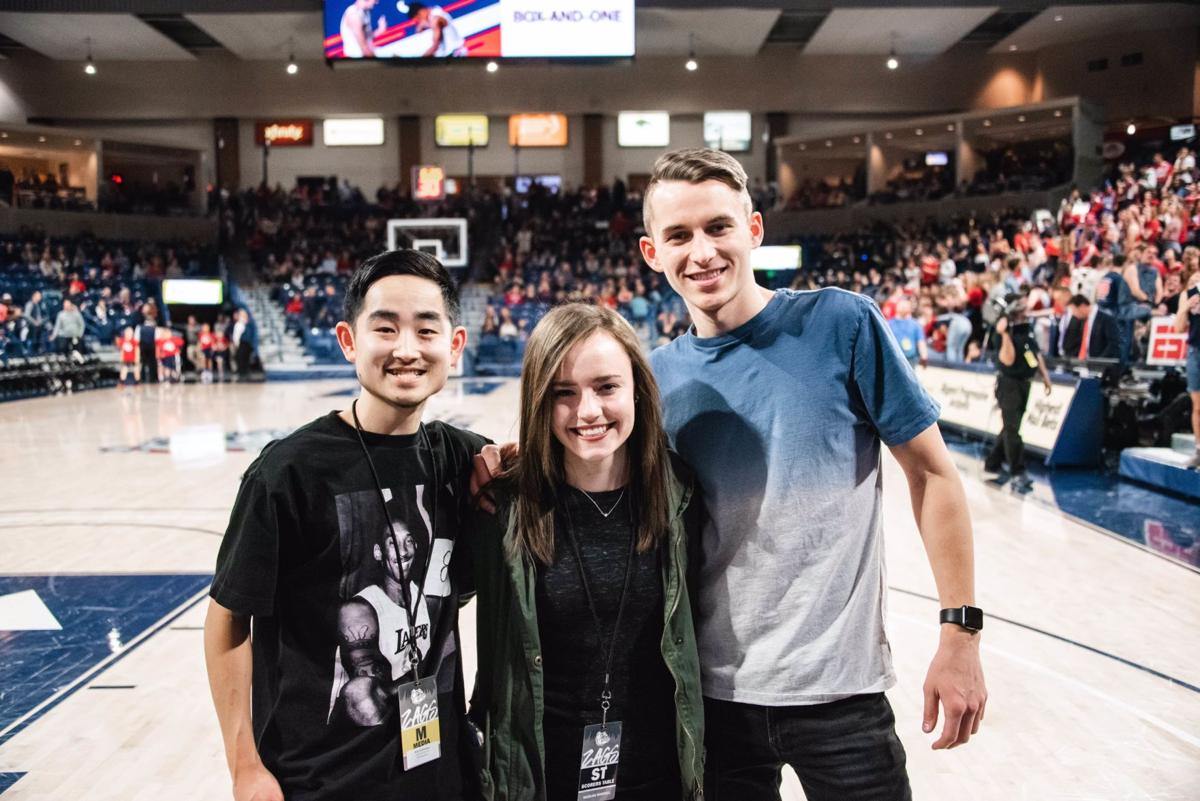 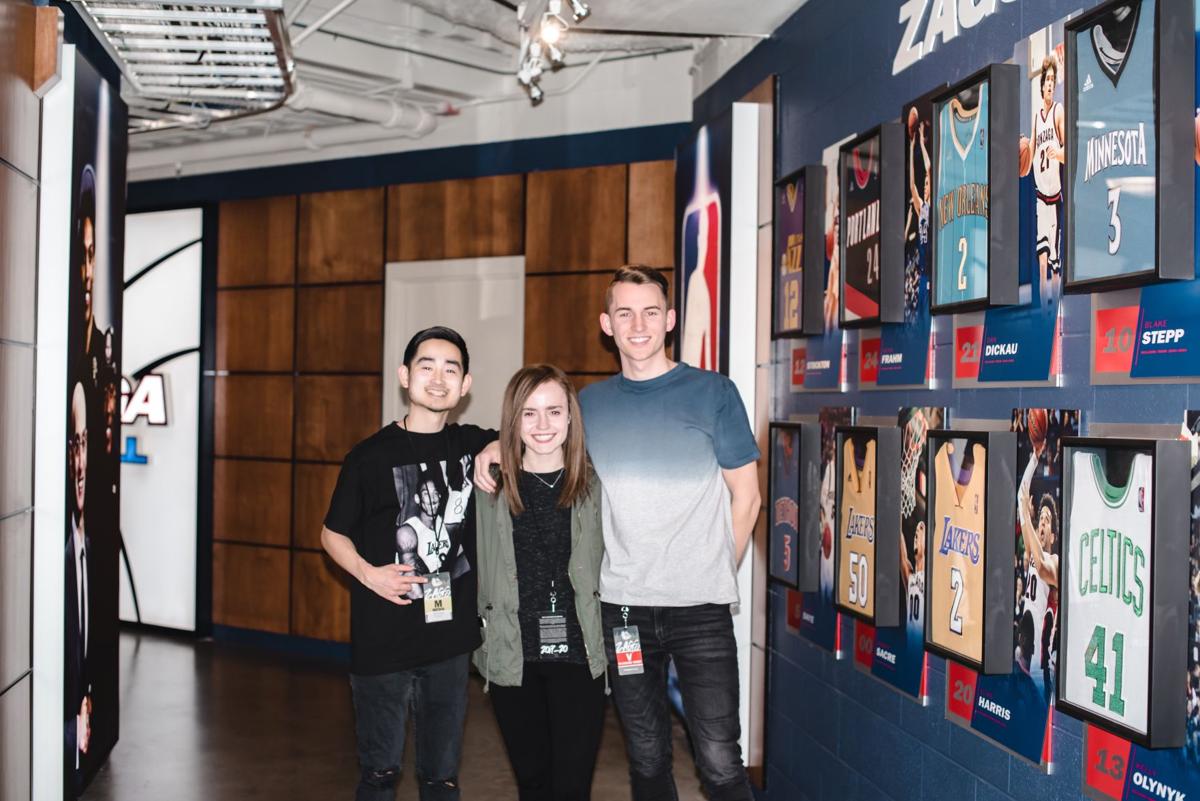 Seniors Nick Tomoyasu (left) was a photographer for Gonzaga athletics, and Madeline Marshall (middle) was a sports information director intern. Sophomore Ben Lathwell is the videographer.

Seniors Nick Tomoyasu (left) was a photographer for Gonzaga athletics, and Madeline Marshall (middle) was a sports information director intern. Sophomore Ben Lathwell is the videographer.

What spectators see are athletes playing the game that they love, whether it’s basketball, soccer, volleyball or any other sport at Gonzaga University. What they may not realize is everything that happens behind the scenes before, during and after any game.

There are three student powerhouses in the athletic department — seniors Madeline Marshall and Nick Tomoyasu and sophomore Ben Lathwell. Marshall is a sports information intern, Tomoyasu is a photographer and Lathwell is a videographer. Together, they call themselves the Dynamic Trio.

Marshall’s job comes with countless tasks, such as assisting in producing game notes and statistics, keeping track of player milestones and managing social media pages, all while ensuring that any visiting media groups get what they need.

“She is a saint,” Lathwell said. “She’s got to do a lot of busy work on those stats and stuff.”

From freshman year through senior year, Marshall has worked under the department's sports information directors (SIDs) including Barrett Henderson, Todd Zeidler and Jenna Larson, all of whom have gotten to know her personally and have learned to depend on her in their own jobs.

“I told her that she was in charge of finding Madeline 2.0,” Henderson said. “That was about the only task that she never did for me, but I think it’s impossible to find another one of her.”

Marshall grew up around college athletics. Her aunt worked in the field, and her dad played baseball at Oregon State University and later worked in sports information. Her brother, who is a sophomore at OSU, works as a manager for the university's baseball team. It was inevitable that she ended up working in the athletic world as well, as Marshall knew she wanted to do something in sports as early as the third grade.

“Sports is able to unite people in such a powerful way,” Marshall said. “Everyone who is in this industry works in it because they truly love it. … When I go to work, it doesn’t really feel like work.”

Originally, she planned to follow in her aunt’s footsteps by becoming a sports reporter. However, when she began working in the sports information department at GU, she fell in love with it. She was drawn to its fast-paced atmosphere, the communication aspect and the connections she made with great people who are already so successful.

“It’s definitely the people in this industry that make me work as hard as I do,” Marshall said.

After graduating in May, Marshall will attend the University of Mississippi as a graduate student and work as an assistant in their athletic department, focusing on men’s basketball and men’s and women’s golf. She attributes this new job opportunity to luck because of the connections that resulted from working for the NCAA at the College World Series in Omaha, Nebraska.

For the last three years, Marshall has worked closely with Tomoyasu.

“He’s honestly like a brother to me,” Marshall said. “It’s cool because we just like bounce ideas off each other all the time.”

Though he started working for the athletic department as a sports information intern and photographer his sophomore year, Tomoyasu was strictly a photographer his junior and senior year. He photographs for all of GU’s varsity sports and is also in charge of posting to GU’s social media accounts.

“He’s definitely found a career path for himself,” Henderson said. “He has an eye for shooting sports … it’s not easy. Everyone thinks that they can just go out and point a camera.”

Believe it or not, Tomoyasu didn’t buy his first camera until his freshman year of college. He taught himself how to use it through YouTube videos until he signed up for a photojournalism class his sophomore year.

“He’s really good at capturing the moment that everyone wants to see,” Larson said. “He’s in the right spots; he understands the angles. I mean it seems like he’s been involved in photography a lot longer than just four years.”

To ensure that even the players on the bench get a shining moment in the frame, he spends countless hours editing 400 to 1,000 photos each game day. It might have taken a slight toll on his GPA having to stay up doing homework past 3 a.m., but he still manages to get everything done.

“I’m really grateful for them because out of all the pictures that they could choose from … they choose mine to post and that’s just like really heart-warming to me,” Tomoyasu said.

When Tomoyasu played basketball, he didn’t have many pictures of the experience, so providing photos for the players to remember their time in a GU uniform is an honor for him.

Together, Marshall and Tomoyasu have gained abundant respect and trust from the athletic department. They have been crucial additions to the program and have made the SID's lives that much easier by acting almost as a fourth SID and a second photographer.

“It’s going to be really hard to find anybody that can do what they do and be able to trust them with the level of work that we’ve given them,” Larson said. “I’m super bummed that they’re seniors and they’re moving on, but I’m really excited for what is going to come for them because both of them are going to be very successful in whatever they do.”

In the future, Tomoyasu’s only requirement is that he continues to work in the sports industry, whether it’s in public relations, photography or something else.

Last year, Tomoyasu and Marshall were introduced to Lathwell. He works as an intern for the Mark Natale, director of video services. Lathwell’s job is to help create hype videos, highlight reels and posts for social media.

Lathwell has always enjoyed cameras and had an instantaneous start to his career. In sixth grade, he started playing around with his mom’s flip phone. In seventh grade, he upgraded to a GoPro. In eighth grade, he bought his first Canon. As early as his freshman year of high school, he began to film more professionally.

Not only was he making recap videos of school assemblies and highlight reels for their sports teams, but he was also doing work for professional companies, like Microsoft and RE/MAX. Since then, he has filmed for famous Youtubers, including Yes Theory, Sam Elkins and Danny Duncan. Though he wasn’t a huge basketball fan at the time, traveling with the team and filming March Madness when he started at GU changed his mind.

“The basketball’s grown on me,” Lathwell said. “It’s like super fun to film; the atmosphere is great.”

Having shot for now NBA players, such as Rui Hachimura and Brandon Clarke, makes it all worthwhile for Lathwell. He gets the opportunity to form relationships with athletes and know that his footage will be part of their lives for a long time.

“It’s pretty cool to be a part of something bigger than myself,” Lathwell said.

One of his favorite parts of the job, like Marshall, is getting to meet other people who work in the industry. Getting to know the other interns at GU and seeing videographers from other schools is part of what makes the experience so valuable.

“It’s like a lifestyle now, not much of a job,” Lathwell said. “Just meeting the people that I’ve met and being able to have Nick and Madeline through everything.”

Marshall is like the older sister to Tomoyasu and Lathwell. If she knows the boys are up late editing, she’ll text their group chat and tell them to go to sleep. If she sees that either of them had a rough game, she’ll check in on them.

The three of them hype each other up, constantly complimenting each other’s work and showing up to games early just so they can hang out. Having that support system makes life easier for them, but it also allows them to have fun in the midst of a draining job.

“It’s always a good time when we’re together,” Tomoyasu said. “Whether that’s working in athletics or hanging out on campus … they inspire me to work hard and be the best I can be.”