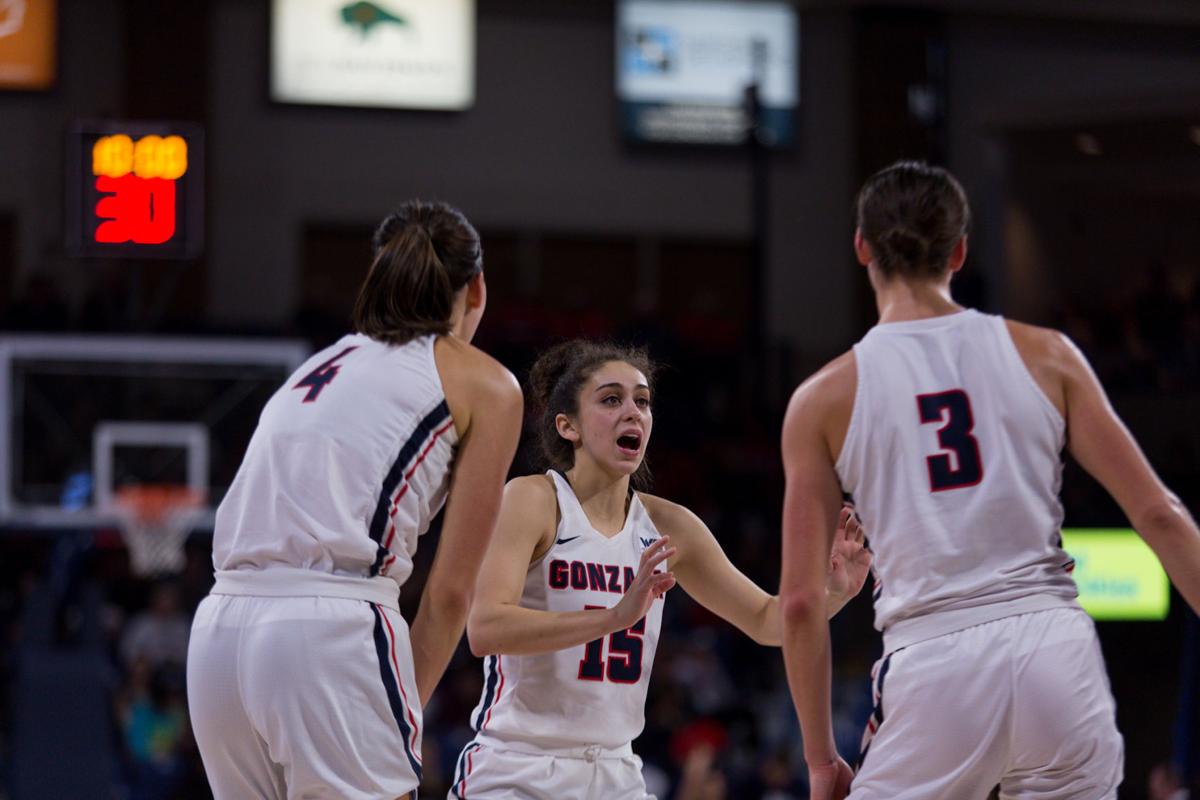 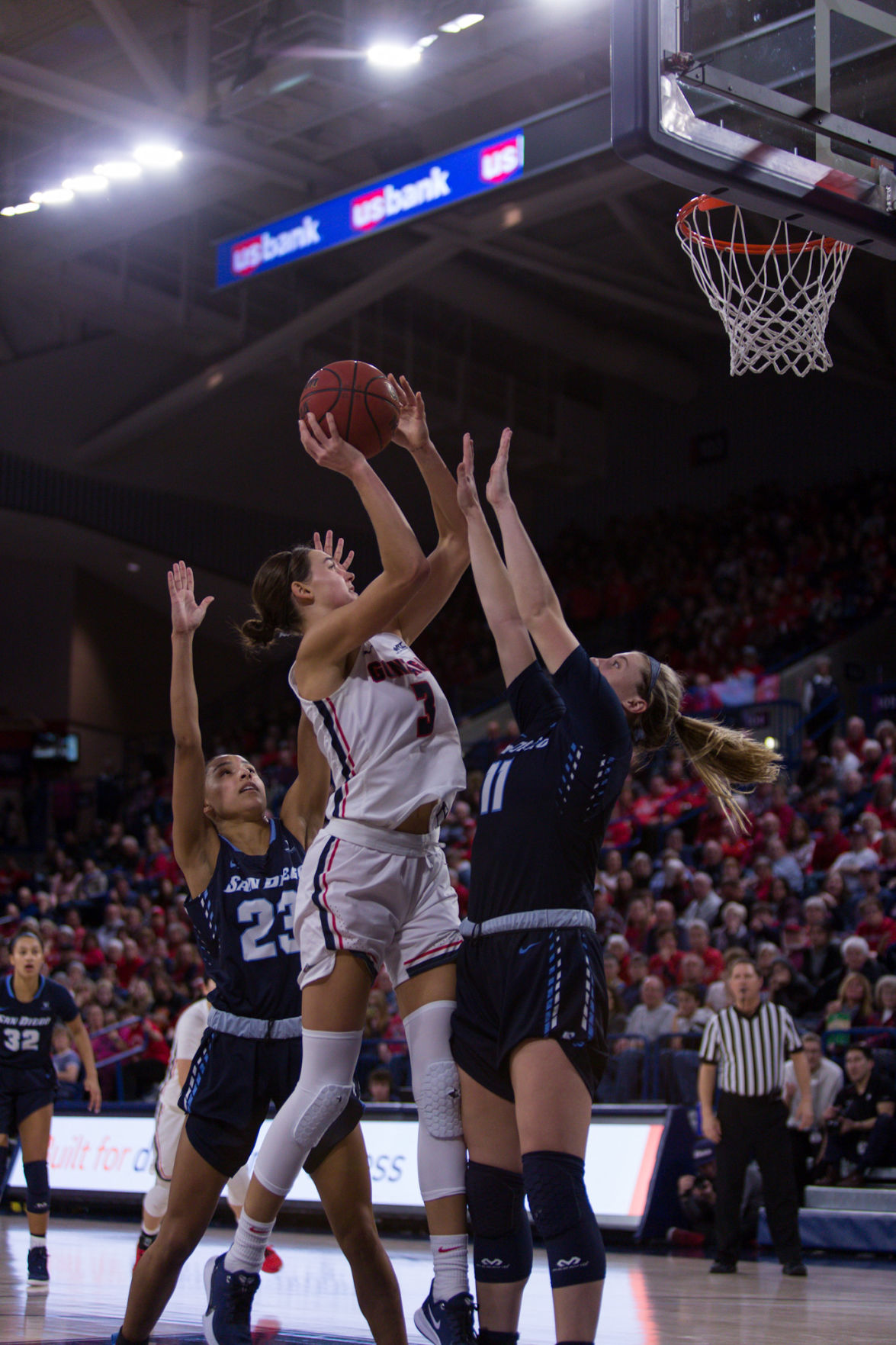 Gonzaga junior forward Jenn Wirth drives into the paint for a shot in the team's 57-46 win against USD Thursday night. 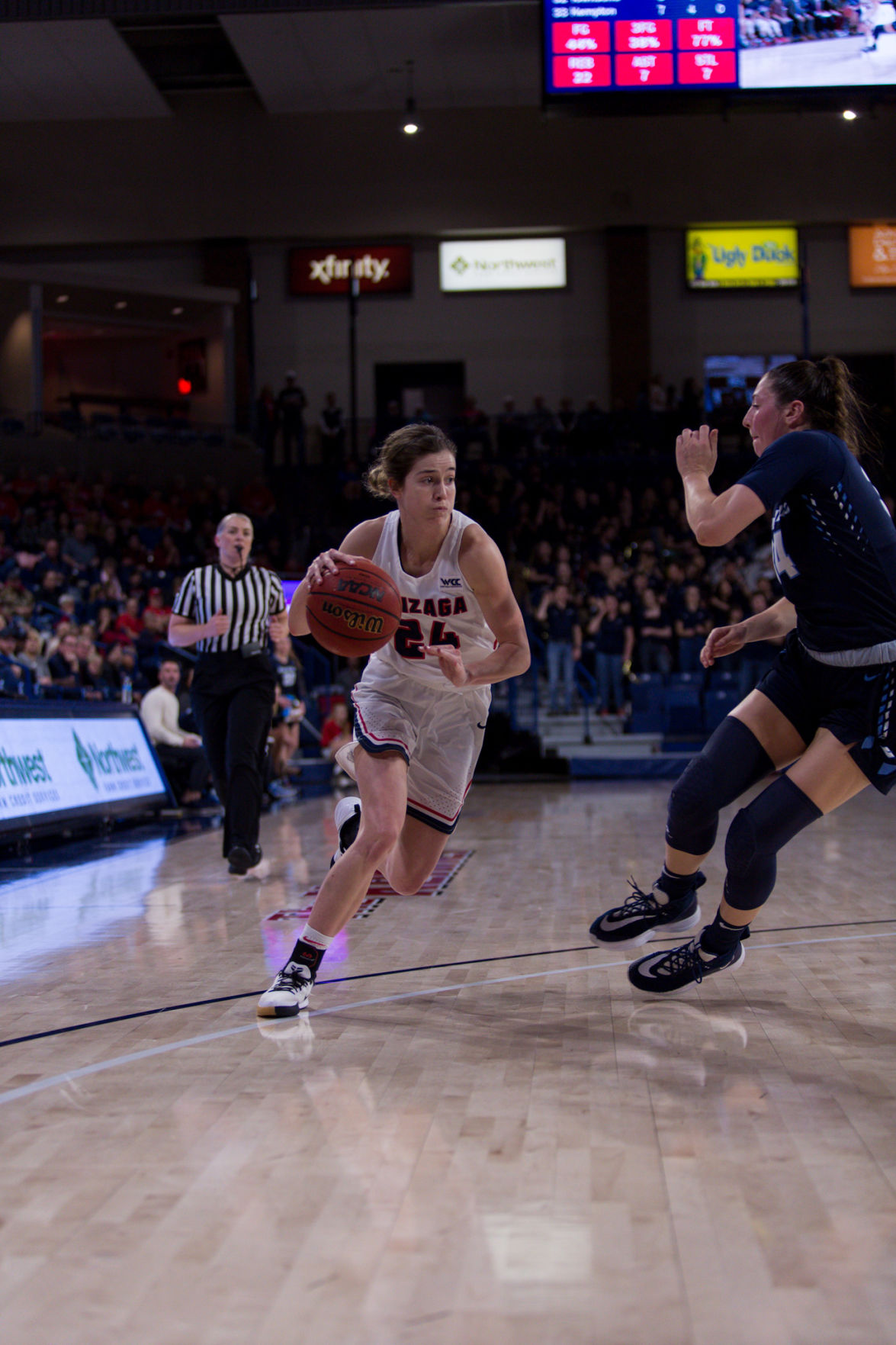 Gonzaga senior guard Katie Campbell drives to the basket in the 57-46 win against USD. 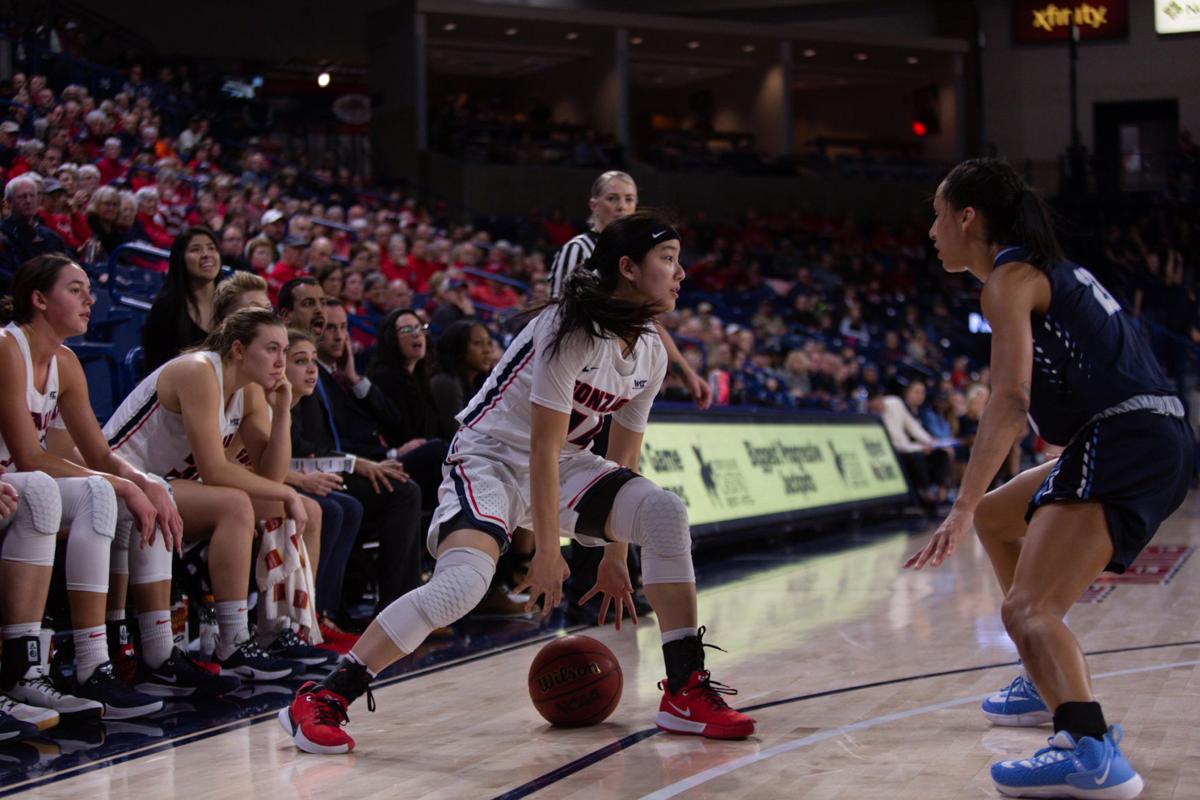 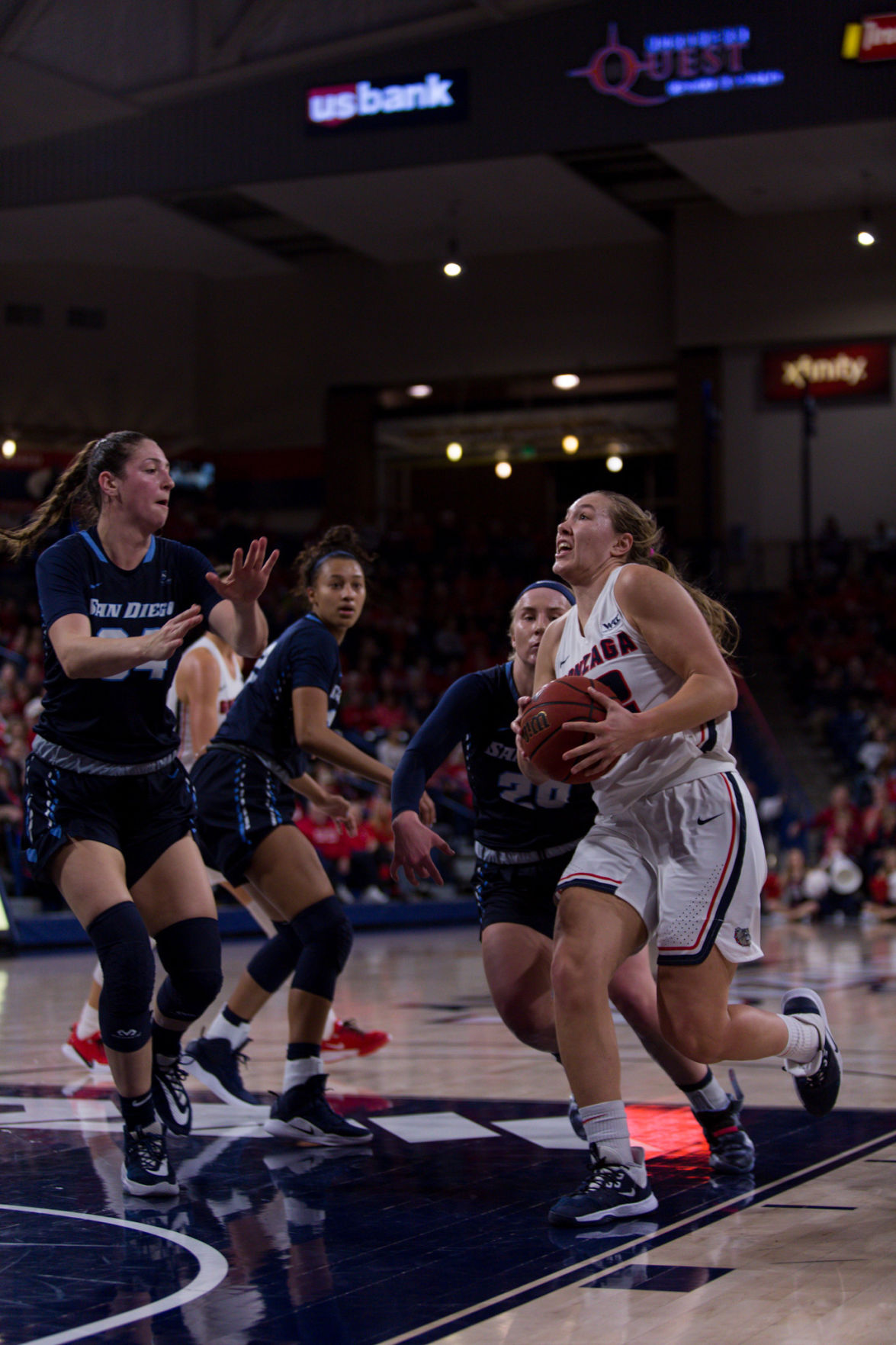 Gonzaga junior forward Jenn Wirth drives into the paint for a shot in the team's 57-46 win against USD Thursday night.

Gonzaga senior guard Katie Campbell drives to the basket in the 57-46 win against USD.

Gonzaga Women’s defeated the University of San Diego Thursday night at home by a score of 75-46.

The win extends the Zags active longest win streak in the nation, bringing it to 19 games, advancing the team to a 21-1 record on the season. While impressive, some would say this win wasn’t necessarily the most refined game the Bulldogs have had on their road to being the 12th ranked team in the country.

“I thought it was a bit of a struggle but we need that to get better,” sophomore forward Melony Kempton. “If we push through those struggles, then we figure ourselves out, and if we make mistakes, we just got to figure out how to get through it. It’s just a building block and these are great games to go through because we need games where we’re not just blowing teams out because if we didn’t experience those and got to important close games, then we wouldn’t know what to do.”

The 12-8 Toreros are currently ranked ranked 4th in the West Coast Conference, but since losing to GU in early January, USD were winners of four of their last five, looking to make a statement in The Kennel.

“We knew that they were going to want to come out there and perform just as much as we wanted to, and try to take us down,” junior guard Jill Townsend said. “And they had a lot of momentum. They’ve beaten some really good teams. So coming out, executing and getting a win is what we were looking for and we got it.”

The Toreros momentum showed early in the first quarter, as they jumped out to an 11-4 lead, forcing seven turnovers by the Zags in the first ten minutes.

GU shot back, finishing out the first half on a 24-7 run to head back into the locker room up 28-18. They held USD to 7 points in the second quarter on 3-15 shooting, including a five minute period of time in the quarter where they kept the Toreros from scoring.

Although leading at the half thanks to solid defensive play, the Zags still looked to make improvements on the offensive side of the ball, as they were shooting 36.4% from the field.

"At halftime, our big talk was about finding other ways to get ourselves open on offense and lock down on defense, helping each other out,” senior guard Jessie Loera said. “In the second half I think we really showed as we really dialed in and focused on what we needed to focus on and took care of the ball a lot better, which I think we did.”

The Zags appeared to be hitting their offensive stride through the middle portion of the third quarter, where they went on a 12-4 run that was capped off by back-to-back 3-pointers by Loera and freshman guard Kayleigh Truong, extending their lead to 45-28. Soon after however, GU went on a six minute scoring drought, which allowed the Toreros to bring the game back within 10 points at 47-37.

Kempton, who came off the bench, ended up being the spark the Zags needed to recover from their dry spell, as she drove to the lane to score a layup with 6:04 left in the game, getting the Bulldogs back on track. Kempton ended up finishing the game with 13 points on 5-6 shooting and 7 rebounds, awarding her with the honors of player of the game.

“Melony was just doing everything that we needed. We weren’t getting a bunch of offensive rebounds, but she picked up the slack in that area and all areas that we as a team weren’t very successful in,” Townsend said. “To come off the bench and do that is crucial, and as a sophomore to find her role that way is super important.”

“I just knew we need energy and that’s my role on the team so I wanted to be that tonight to help us get going again and I think I did okay,” Kempton said. “It just goes to show that we play fluid team basketball, so if one or two people aren’t scoring like they usually do, it shows that everybody else will pick up the slack.”

Her star performance did come in the absence of high scoring games from the two starting forwards, Jenn Wirth and LeeAnne Wirth, who many say are some of the most prolific scorers on the team. They scored only 2 points and 4 points respectively, as USD’s defense down low was able to stifle them from ever taking an uncontested shot in the paint.

The Toreros were also able to force GU to take a number of last second shots to avoid committing shot clock violations throughout the game, making it hard for the Zags to take the shots they wanted.

“When we held it too long or tried to force the issue by getting it to one person, that’s when we struggled a bit, but that second half was more impressive than the first, especially that third quarter,” head coach Lisa Fortier said. “ And it’s hard for our bigs to be hassled out there for 40 minutes, that’s physically difficult and also proved to be a mental test. They overcame all of that and they had some good solutions in the second half, I think we moved the ball better.”

Townsend was also provided a much needed need contribution, ending the game with 10 points and 10 rebounds, her third double-double in five games.

Even with a lack of direct contribution to the scoreboard by some of GU’s key players, a season-high 24 turnovers, and a 42 percent team FG%; big performances by Kempton, Townsend and Loera propelled the Zags to an 11 point victory Thursday night as they head into Saturday’s home matchup against BYU.

Asher Ali is a staff writer.