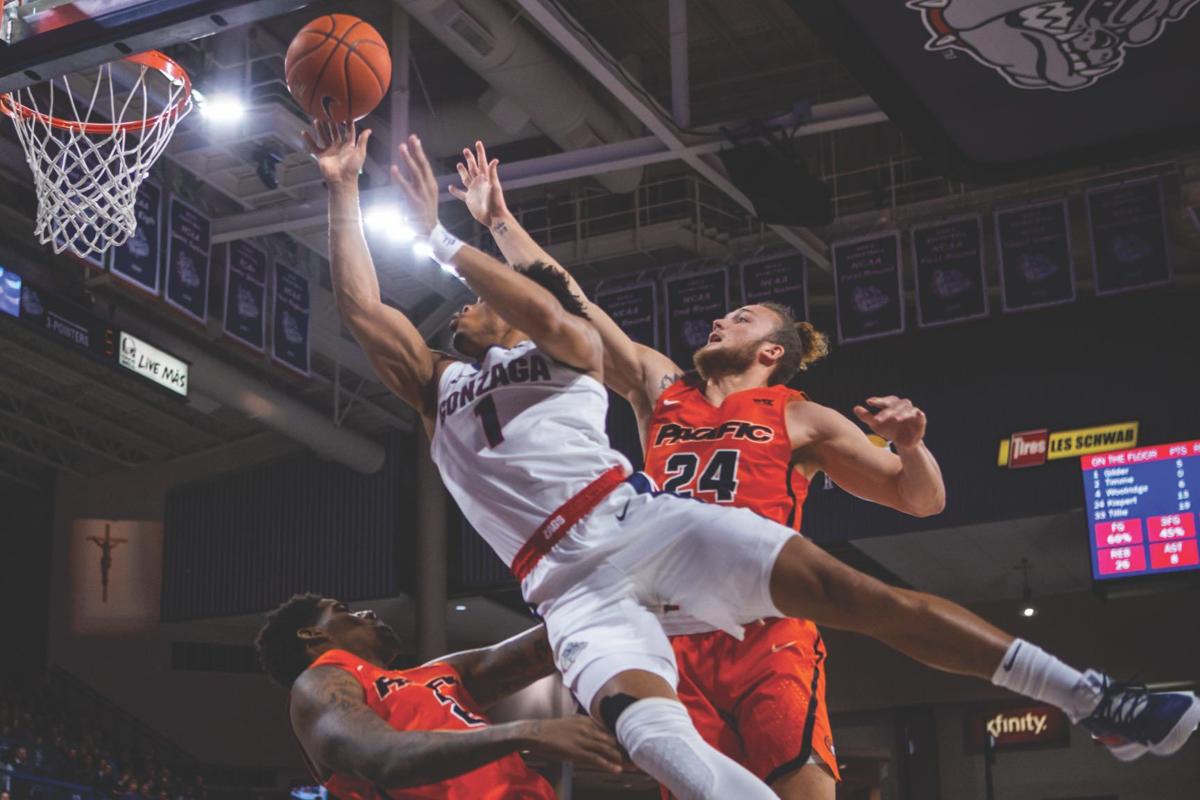 Gonzaga graduate transfer guard Admon Gilder Jr. drives to the basket as the Bulldogs defeated University of Pacific 92-59 on Jan. 25. 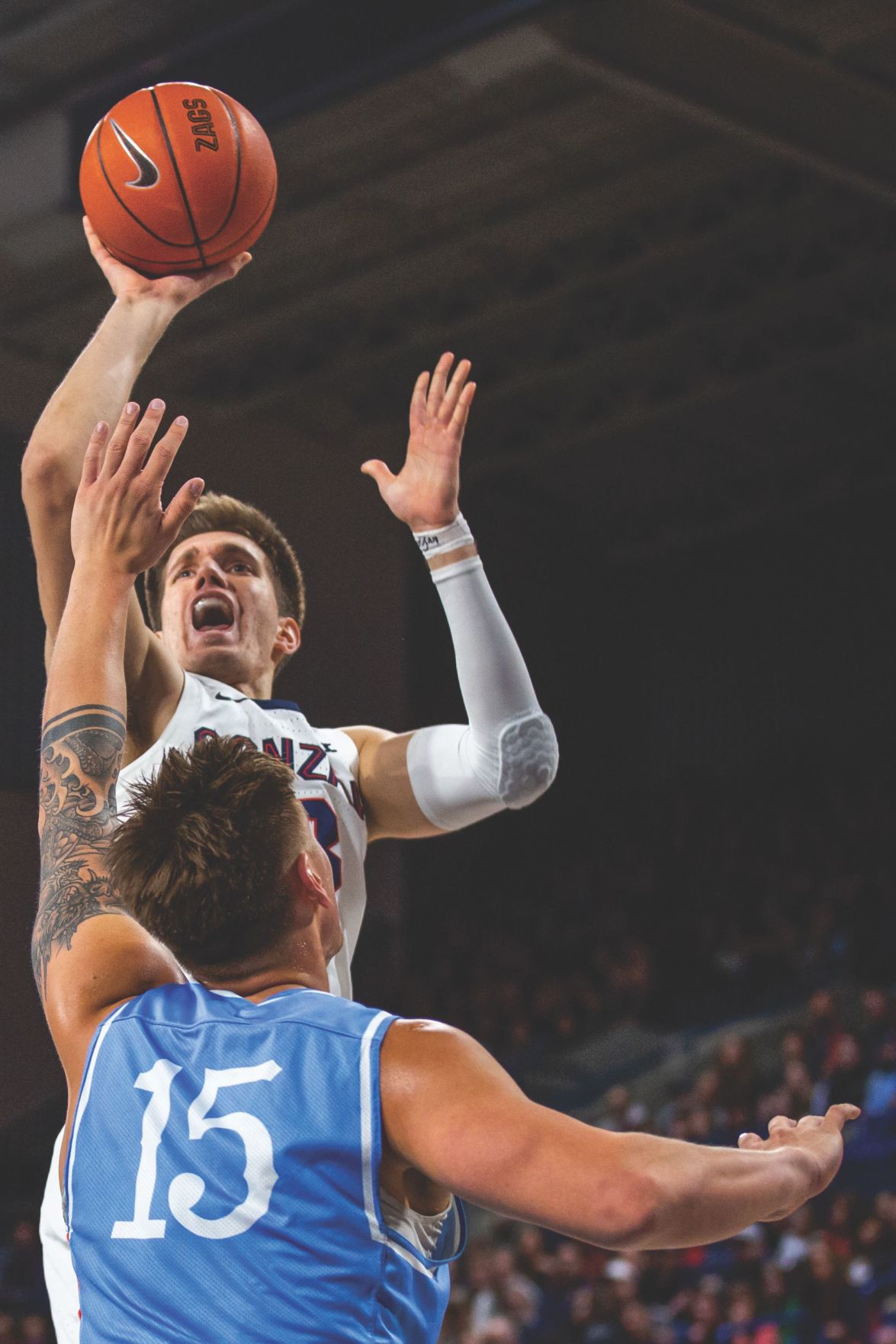 Gonzaga graduate transfer guard Admon Gilder Jr. drives to the basket as the Bulldogs defeated University of Pacific 92-59 on Jan. 25.

As February fades into March, the college basketball season shifts from the regular season grind into conference tournaments and NCAA Tournament play, when 68 teams will duke it out for the national championship.

For Gonzaga University and the rest of the West Coast Conference, the path to the National Championship in Atlanta begins in Las Vegas, where 10 teams will compete in the WCC Tournament with an automatic bid to the NCAA Tournament on the line.

After an 86-76 win over Saint Mary’s on Saturday, the Zags (29-2, 15-1 WCC), while looking vulnerable at times, sustained a dominant stretch of basketball in the regular season. With a handful of blowout wins on its schedule, GU finished the season boasting the nation’s best scoring margin, defeating teams by an average of 20 points per game. Despite close victories against Pepperdine and San Francisco, and a loss to BYU, this has been the overarching theme for a team that’s looking for its 18th WCC Tournament championship.

While a place in the NCAA Tournament is seemingly guaranteed for GU, based on its regular season performances, a chance to solidify a No. 1 seed and avenge last year’s loss to Saint Mary’s in the championship game lies ahead.

“We need to bring that trophy back because we know we’re the best team in the league,” said Filip Petrusev, sophomore forward and WCC Player of the Year. “We deserve it with our work and everything we’ve done this year.”

With byes in the first two rounds  and guaranteed a spot in the semifinals, Petrusev and his teammates will have to wait a few days before they have the opportunity to claim the title.

In the lone meeting between LMU and USD this season, the Lions won  64-58 in Los Angeles. Despite holding LMU’s leading scorer and second team All-WCC member Eli Scott to seven points, USD couldn’t handle the Lions depth, as they had 30 points off the bench.

As well as leading the team in scoring, Scott is the team’s top rebounder and passer, and will look to bounce back against a USD team that has the second- worst scoring offense and defense in the WCC.

The winner of this game will face the San Francisco Dons (20-11, 9-7 WCC) in a second-round game slated for 6 p.m. on Friday. The Dons have relied on a balanced attack this season, with four players averaging double-digit points, headlined by redshirt junior and second team All-WCC player Charles Mineland, who averages 14.6 points per game.

USF is a combined 3-0 against the Lions and Toreros this season.

In the second matchup of the first round, the Broncos will look to defeat the Pilots for a second time this season. In a dominant 85-61 victory over UP in Portland, SCU shot 52.2% from the field and 50% behind the arc. The Broncos also had 11 steals as they shut down the Pilots’ offense.

The winner of this bout will play the Pepperdine Waves (15-15, 8-8 WCC) on Friday at 8 p.m. The Waves are led by first team All-WCC junior Colbey Ross, who averages 19.8 points and a conference-best 7.2 assists. Ross will look to continue his success from last year’s tournament, when the guard was named to the WCC All-Tournament team, averaging 20 points across four games.

The Waves are a combined 3-0 against the Broncos and Pilots this year, including an overtime victory over SCU earlier this season, when Ross scored 24 points and seven of the team’s 11 overtime points.

This leaves the top-four teams in the conference — GU, BYU, Saint Mary’s and University of the Pacific — all awaiting their opponents.

Pacific’s season (23-9, 11-5 WCC) has been a vast improvement for a program that has struggled since joining the WCC in 2013. Prior to this season, the Tigers had never finished with a winning record in conference play. Now, it has become one of the best teams in the league, led by one of its best players, senior guard and WCC Defensive Player of the Year Jahlil Tripp.

Tripp has averaged 15.8 points per game while shooting 51.7% from the field. He also leads the conference in rebounds and averages 1.5 steals for one of the best defenses in the WCC.

While this wasn’t the case when GU beat Pacific 92-59 in The Kennel on Jan. 25, the Tigers boast the conference’s best scoring defense, holding opponents to an average of 64.3 points.

Tied with Pacific in the standings are the Saint Mary’s Gaels (24-7, 11-5 WCC) who have a history of success in the WCC Tournament. The Gaels have won the third-most games in the tournament (32)  among WCC teams and have the second-most championships (four), with the most recent coming against GU last season.

This season’s team is led by the veteran duo of first team All-WCC players Jordan Ford and Malik Fitts, who have powered a potent Gaels offense that ranks third in the conference in points per game at 75.9. Shooting the ball from deep has also been a strength, ranking third in the nation at 40.2%.

BYU is the hottest team coming into the tournament after closing the regular season on a nine-game winning streak, deserving of the No. 15 spot in the Associated Press Top 25.

With many improved teams and talented players across the conference, GU will have to prepare for a battle in Las Vegas. The Zags semifinal game will take place at 6 or 8:30 p.m. on Monday.