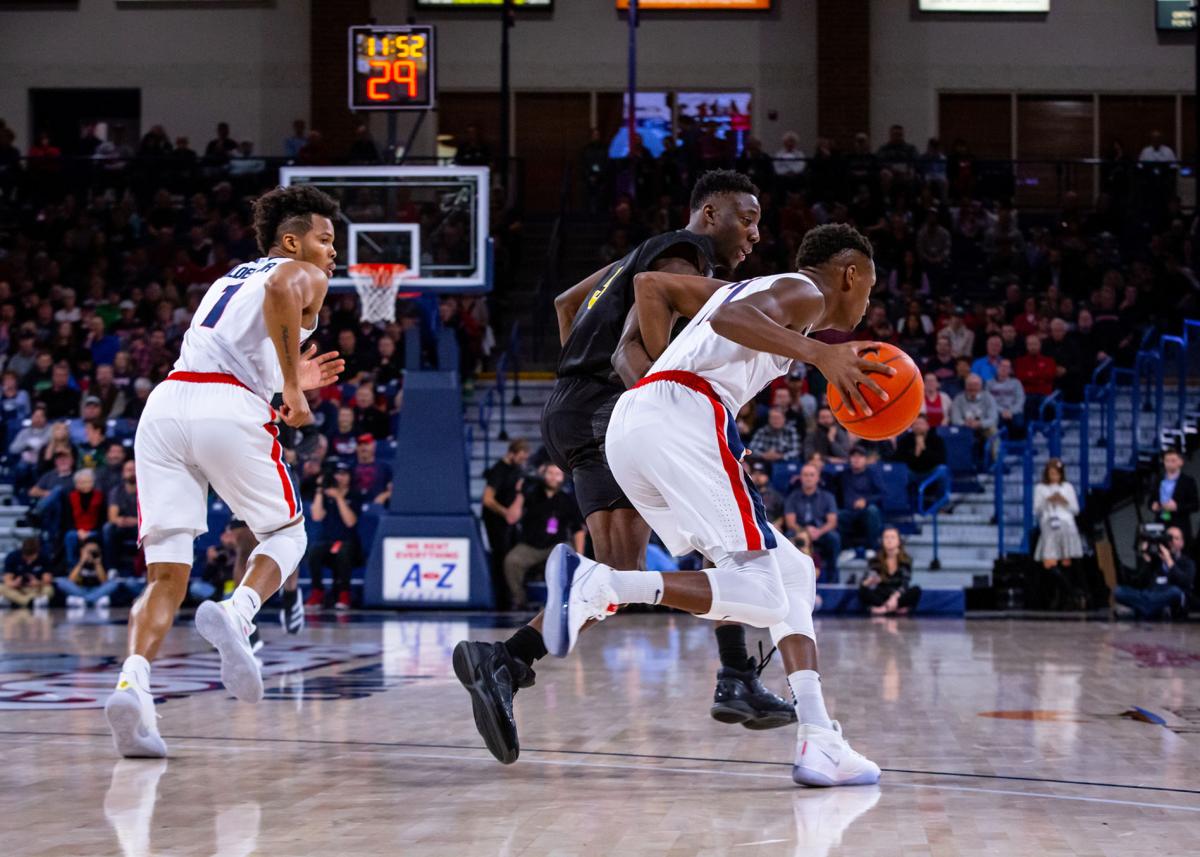 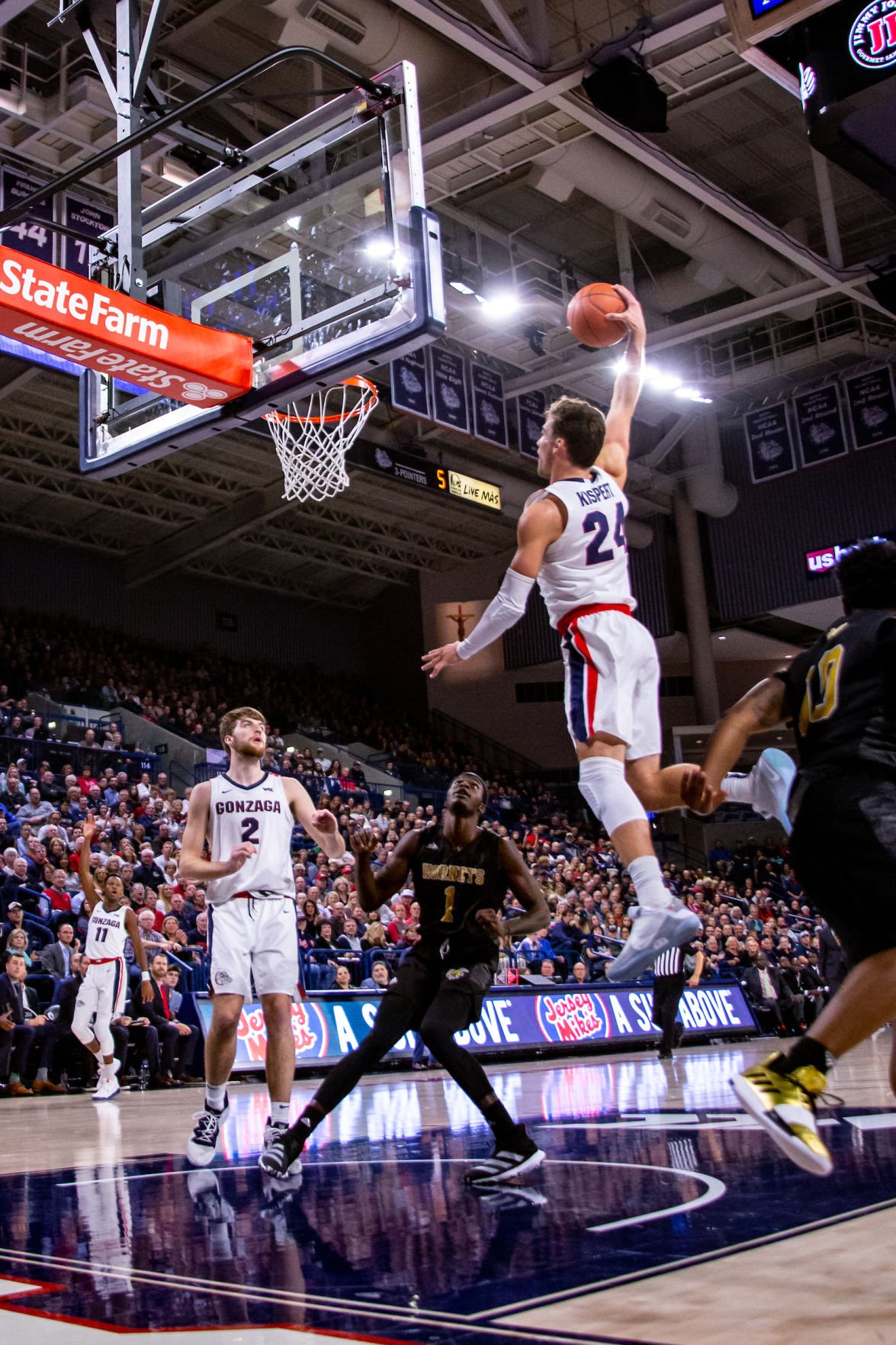 Corey Kispert rises up for a slam, good for 2 of his career-high 28 points. 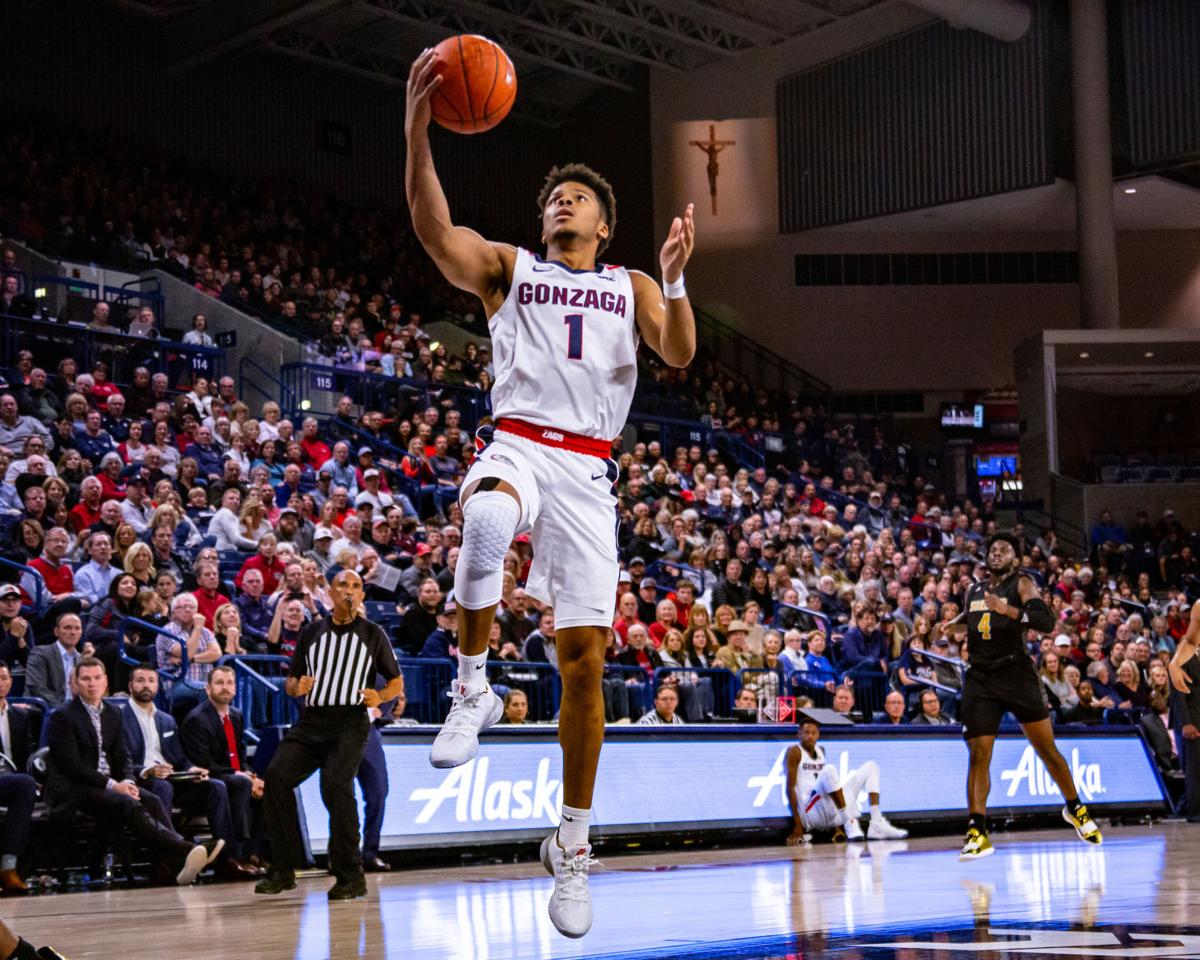 Admon Gilder goes up for a layup. In his first regular season game in a Gonzaga uniform, Gilder finished with 12 points, 3 rebounds, and 1 assist. 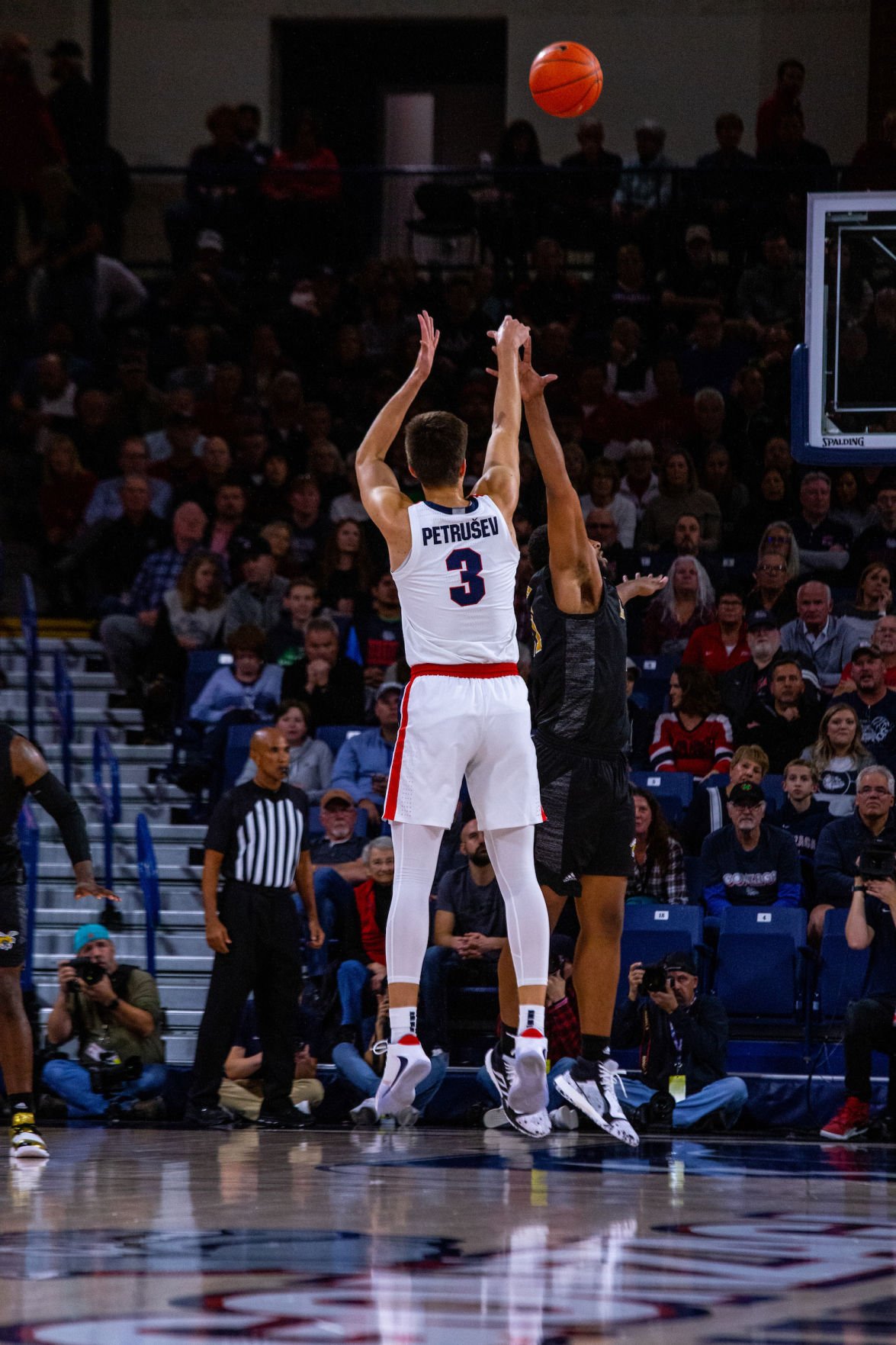 Filip Petrusev shoots over the Hornets' defense. Petrusev had a very efficient night, netting 15 points in only 21 minutes.

Corey Kispert rises up for a slam, good for 2 of his career-high 28 points.

Admon Gilder goes up for a layup. In his first regular season game in a Gonzaga uniform, Gilder finished with 12 points, 3 rebounds, and 1 assist.

Filip Petrusev shoots over the Hornets' defense. Petrusev had a very efficient night, netting 15 points in only 21 minutes.

The Gonzaga Bulldogs kicked off the men’s basketball season with a 95-64 victory over the Alabama State Hornets on Tuesday night in the McCarthey Athletic Center. Junior wing Corey Kispert led the charge for the Zags, scoring a career-high 28 points while shooting 10-for-13 from the field.

“I felt great,” Kispert said. “I was in rhythm, wasn’t thinking too much, and just kind of letting [the game] come to me”.

Kispert, who was recently named to the watchlist for the Julius Erving Small Forward of the Year Award, also made five three-pointers and led a fierce charge late in the second half to help the Zags pull away from the Hornets.

“He’s playing at a high level right now,” Coach Mark Few said. “He’s been a real bright spot for us.”

While the Bulldogs had a comfortable lead for most of the first half, the Hornets were still within striking distance.

“They started hitting threes,” guard Admon Gilder said. “Give them credit, they came out ready to play.”

Those three pointers helped the Hornets pull within nine points with 17 minutes left in the second half.  Guard Jacoby Ross led the way for Hornets, scoring 16 points while shooting 4-for-5 from behind the arc. ASU made 56.9% of their three-point attempts as a team.

But then it was the Zags turn to go on a run of their own. After a steal from forward Filip Petrusev, guard Ryan Woolridge advanced the ball up the court to Kispert, who rose up and dunked emphatically with one hand and celebrated by letting out a roar that woke up The Kennel. Kispert then knocked down a three pointer that extended the Zags lead to 24 points with 12 minutes remaining.

Petrusev rolled his ankle early in the first half after landing awkwardly on a fast break attempt, but was able to finish the game and scored 15 points along with six rebounds.

A serious injury is something GU can’t afford with just nine players on scholarship. Killian Tillie is recovering from surgery he had early October and Brock Ravet has taken a leave of absence from the team.

The Zags defense swarmed the Hornets all night and forced 21 turnovers, scoring 29 points off those errors.

“We’ve been able to get our hands on some balls,” coach Mark Few said about his team’s defense. “That’s something that has been a strength for us.”

Newcomers Drew Timme and Ryan Woolridge each added 11 points for the Zags, and Anton Watson had seven points and five rebounds. GU shot 57.6% from the field and 50% from behind the arc. However, the Zags struggled from the free throw line again, converting just 17 of their 27 attempts.

“Lot of things to work on and get better at,” Few said.

The Zags are back in action on Saturday, when they’ll host Arkansas Pine-Bluff at 5 pm in the McCarthey Athletic Center.