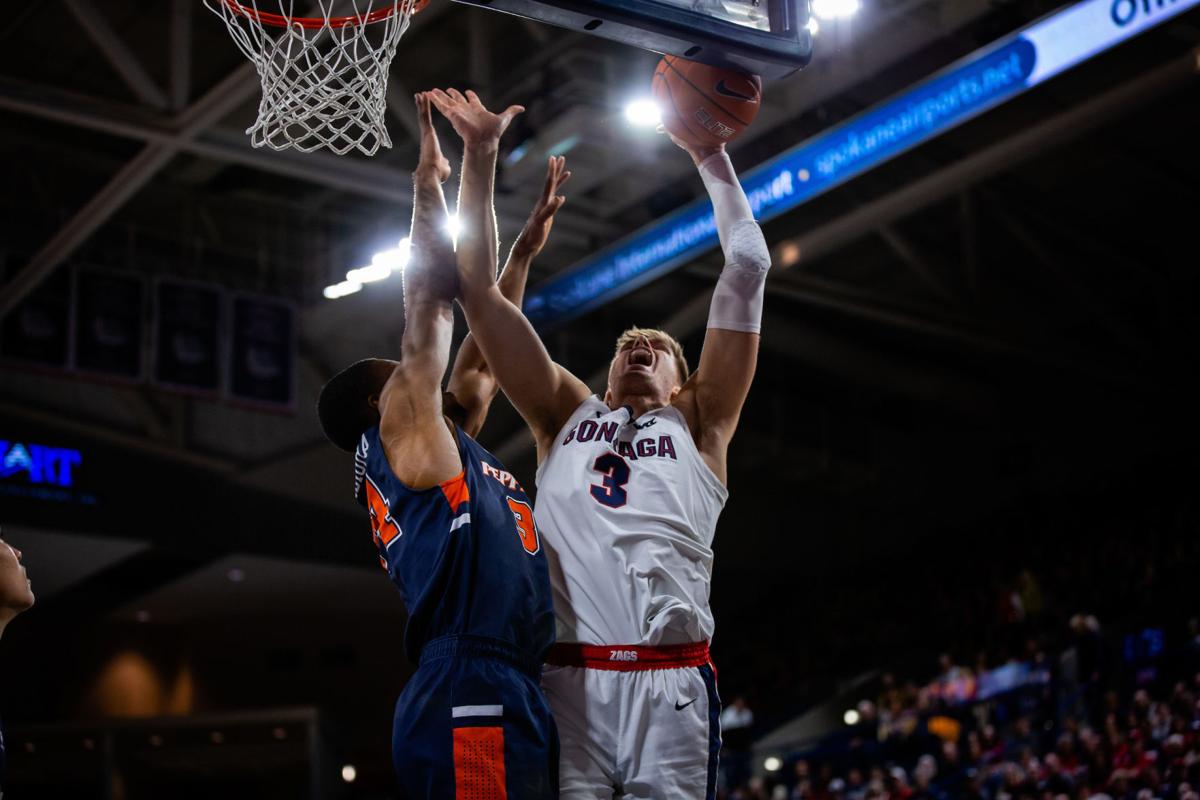 Filip Petrusev goes up strong in the paint against Pepperdine. The sophomore finished with 16 points and 10 rebounds. 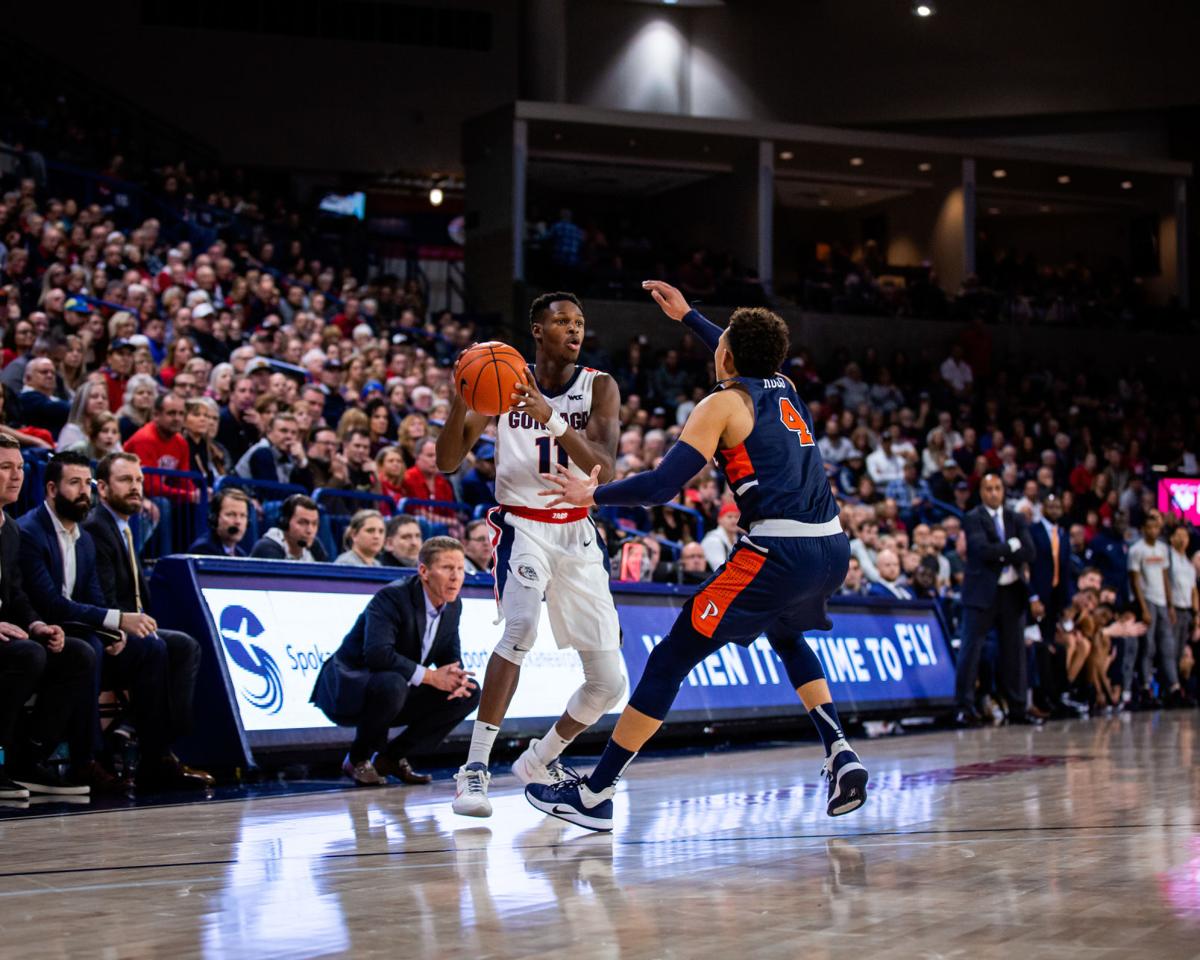 Joel Ayayi looks to move the ball on offense. 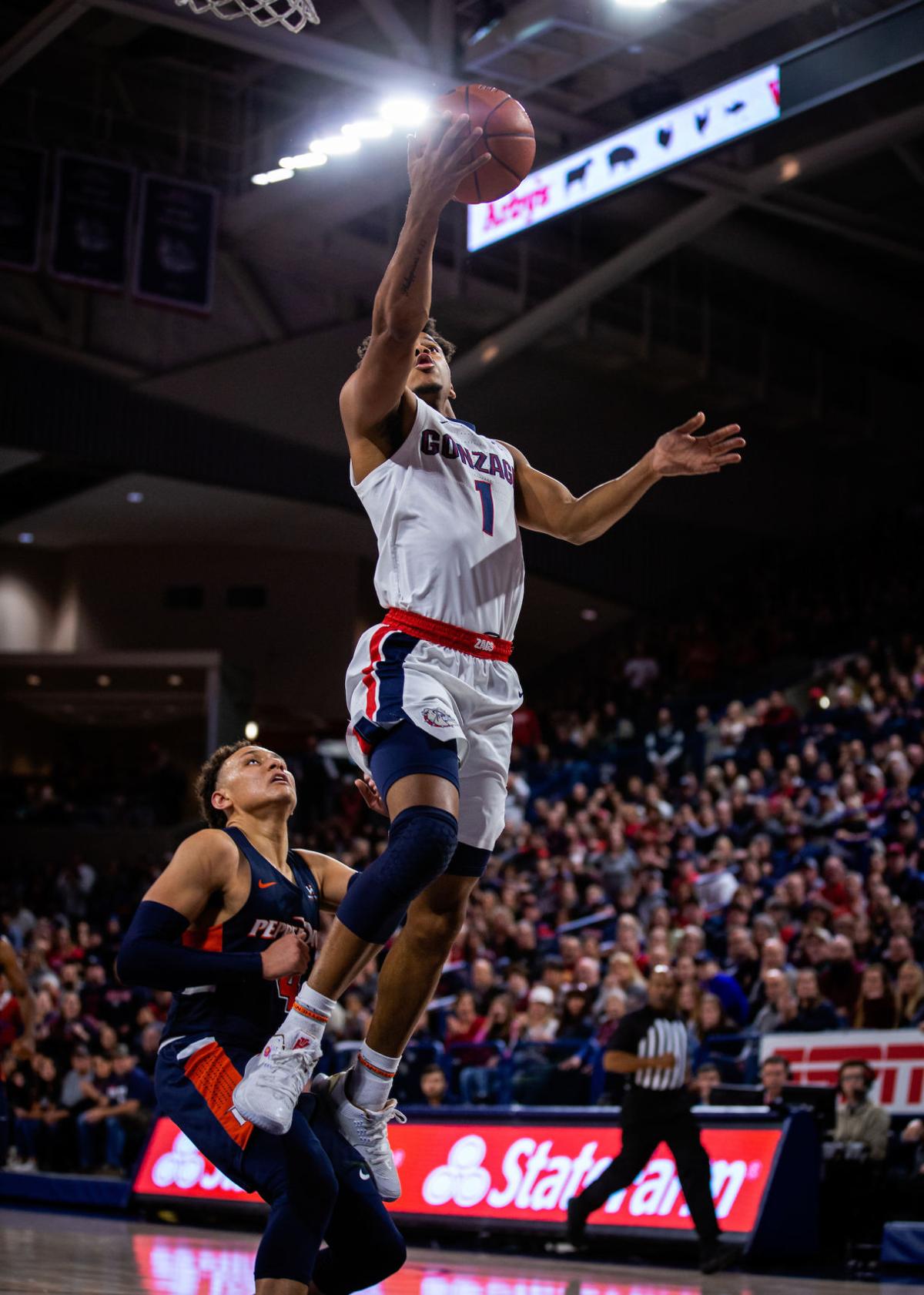 Admon Gilder soars for a layup. Gilder finished with 11 points off the bench. 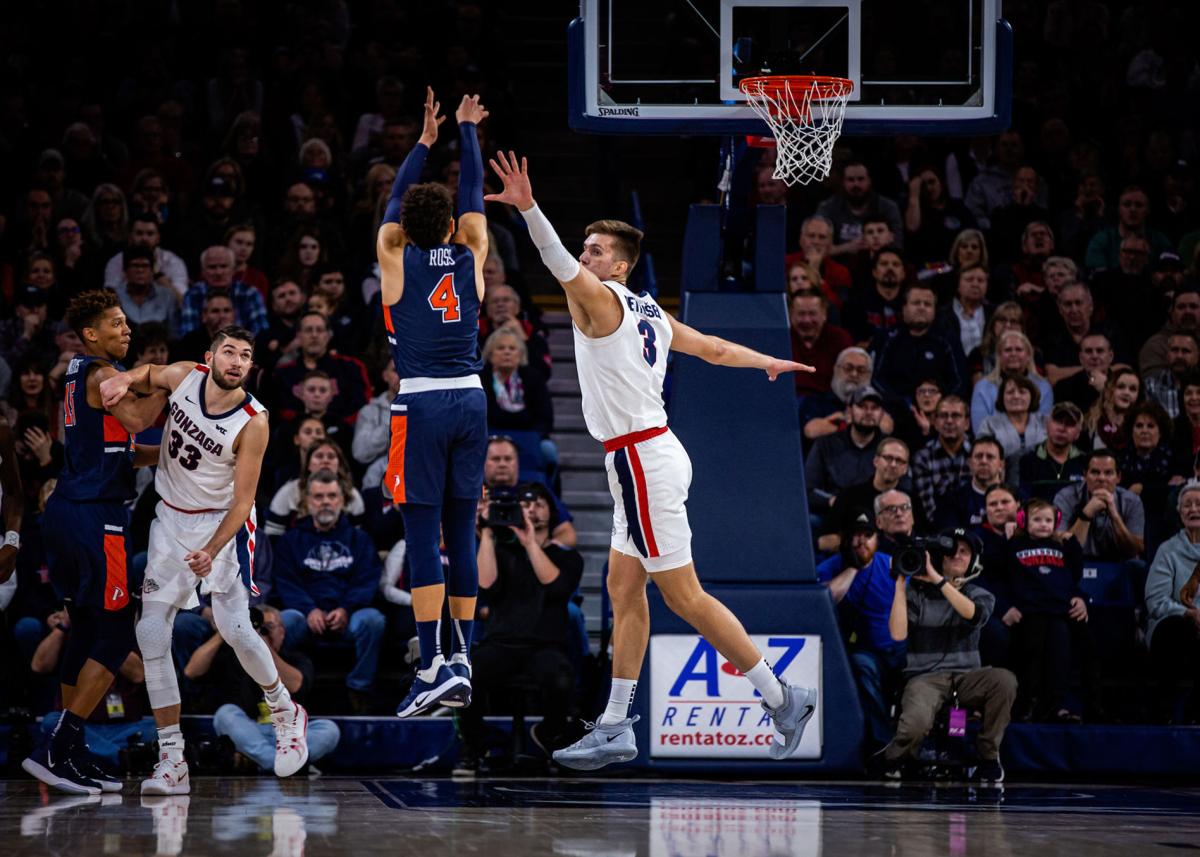 Filip Petrusev defends a shot from Pepperdine's Colbey Ross. Ross finished with a game-high 25 points, but had a potential game-tying three-pointer blocked by Killian Tillie late.

Filip Petrusev goes up strong in the paint against Pepperdine. The sophomore finished with 16 points and 10 rebounds.

Joel Ayayi looks to move the ball on offense.

Admon Gilder soars for a layup. Gilder finished with 11 points off the bench.

Filip Petrusev defends a shot from Pepperdine's Colbey Ross. Ross finished with a game-high 25 points, but had a potential game-tying three-pointer blocked by Killian Tillie late.

A No. 1 ranking for Gonzaga men’s basketball coming into conference play did not mean every game was going to be easy.

Two days after falling behind early against Portland, the Zags (16-1, 2-0) were only up by 3 late, depending on a last-second block by Killian Tillie to put away visiting Pepperdine (7-9, 0-2) for good. That block would be the third and final time the Waves would need to be stifled Saturday evening in The Kennel, as Tillie finished with 20 points to lead the Zags to continue the nation’s longest home winning streak.

Twice throughout the game, GU began to gradually pull away, taking two or three-possession leads that pushed the boundaries of double digits. Both times, mistakes mounted and open shots clanked, and those leads would evaporate as the Waves went on runs to even it up.

The Zags shot 49% from the field and went 5-for-18 from three, many of them wide-open looks in a settled offense.

“We turned the ball over way, way, way too much tonight … missing some things, trying too hard on the offensive end trying to make things happen,” coach Mark Few said.

In the first half, the Zags were up by as much as 9 before going on a three-minute-long scoring drought that allowed Pepperdine to tie the game at 37-all at half. In the second half, GU got back up by 6, and looked to put the game out of reach, but more stalling on offense and another Pepperdine run ensured that the game would remain close until the buzzer.

"We've got to keep getting better," Filip Petrusev, who scored 16 points to go with 10 rebounds, said. "We've got to execute the game plan better, contest every shot, and make them make shots over us."

Leading scorer Colbey Ross was behind much of the action for Pepperdine — slicing to the rim, dishing to open teammates beyond the arc and doing all he could to keep the Waves in the game. He finished with a game-high 25 points, 10 assists and 5 rebounds in 40 minutes, including a pair of free throws to bring the game within three late.

In the end, GU’s physicality in the paint was a difference maker. They won the rebound battle 36-30 and scored 46 points in the paint to Pepperdine’s 32, thanks to a strong effort from Tillie, Petrusev and some efficient minutes off the bench from Drew Timme.

"They were just too big down low for us,” Pepperdine coach Lorenzo Romar said.

The Bulldogs’ backcourt all finished in double digits except Ryan Woolridge, who was held scoreless. Joel Ayayi finished with 12 points, Corey Kispert netted 10, and Admon Gilder came off the bench for 11, including a crucial steal and layup late.

“[Gilder] was great, especially because of his energy and hustle … we needed those more proactive plays,” Few said.

GU’s free throw shooting woes almost came back to bite them for the first time this season, as Kispert missed a free throw with 14 seconds left that would’ve put the game out of reach for the visitors. The Zags shot 66.7% on free throws on the evening, only 1% higher than their season average of 65.6.

Despite his own criticisms, Few was content with a win.

“At the end of the day, you’re supposed to have more points than your opponent,” Few said. “So that’s what we did.”

The Zags will hope for a more emphatic result than their last two games against the West Coast Conference’s cellar dwellers. They have a week-long break before heading down to San Diego to face the Toreros.