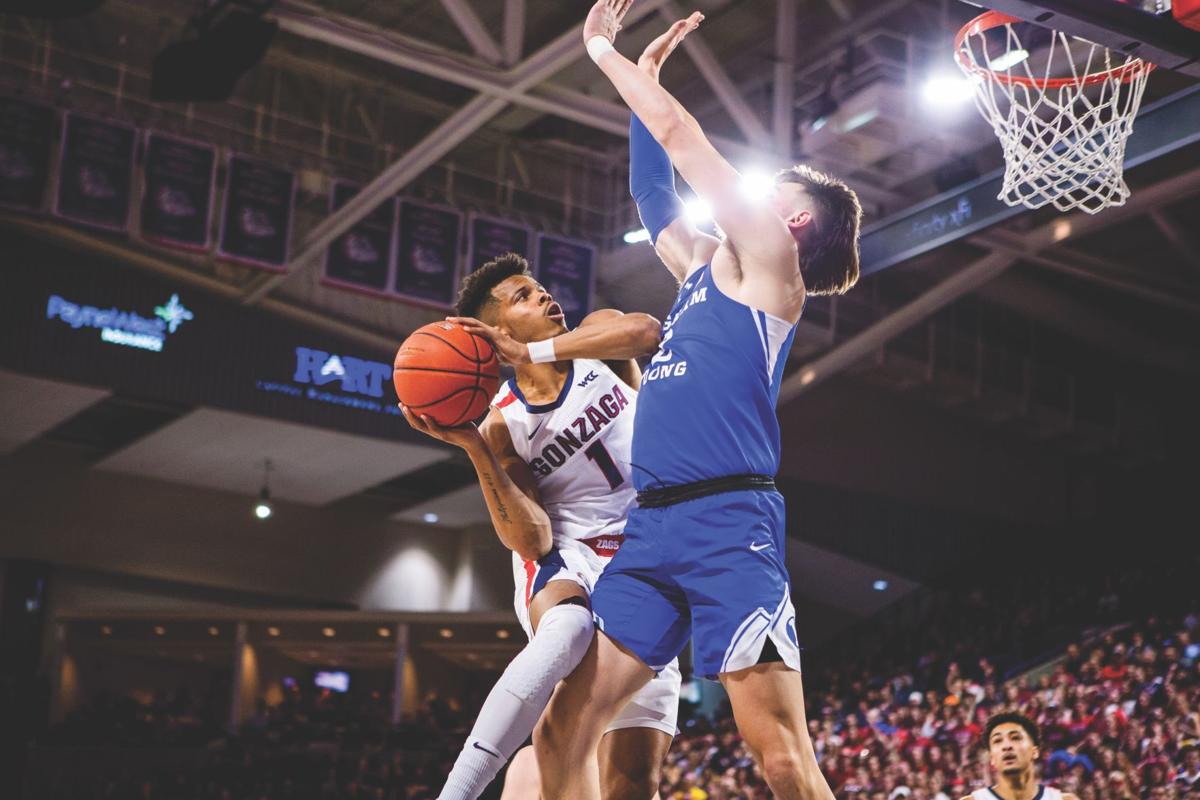 Admon Gilder Jr. shoots around BYU's defense as the Gonzaga Bulldogs won against the BYU Cougars 92-69, in the McCarthey Athletic Center on Jan. 18. 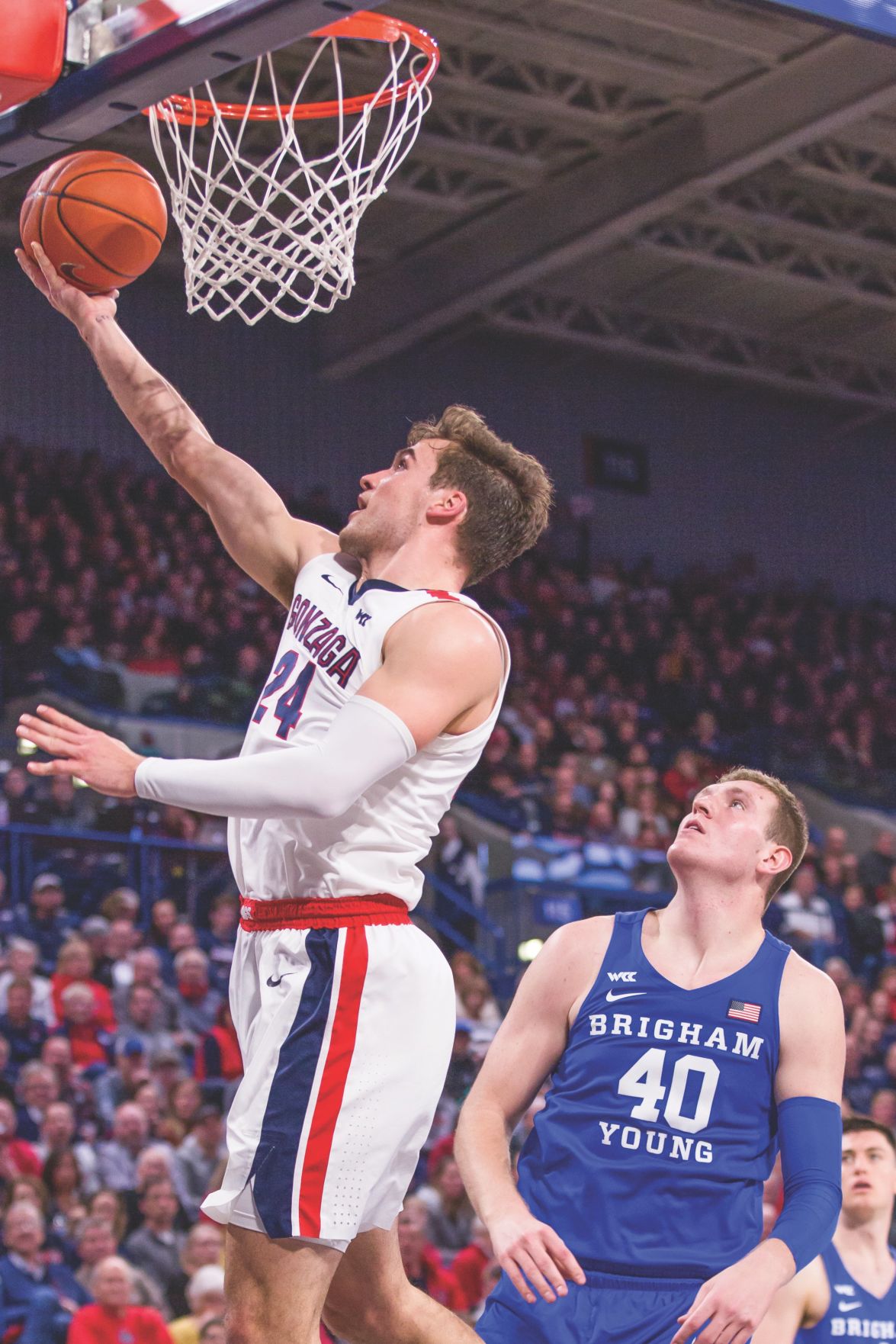 Gonzaga junior forward Corey Kispert drives to the basket in the Bulldogs' 92-69 win against BYU on Jan. 18.

Admon Gilder Jr. shoots around BYU's defense as the Gonzaga Bulldogs won against the BYU Cougars 92-69, in the McCarthey Athletic Center on Jan. 18.

Gonzaga junior forward Corey Kispert drives to the basket in the Bulldogs' 92-69 win against BYU on Jan. 18.

It might not be a rivalry as recognizable as Duke vs. North Carolina. Nor is it as longstanding as Indiana vs. Purdue. But for fans and students of both Gonzaga University and BYU, there’s no bigger contest than the Bulldogs vs. Cougars.

Since their 92-69 victory over BYU on Jan. 18, the Zags have continued to power through opponents during an 18-game winning streak. The one outlier was a close win over San Francisco when senior forward Killian Tillie was out while nursing an ankle injury.

But since its slow start to conference play — at least by GU's standards — in January, the second-ranked Bulldogs have raced past conference rivals. Blowout wins over Pacific, Santa Clara, Loyola Marymount and Saint Mary’s have resulted in a strong stretch of games before the regular season ends and the conference tournament begins.

This run of dominance has been powered by the Zags' balanced attack, with seven players averaging at least 10 points per game. But there have been moments when head coach Mark Few relied on one of his leaders to get a crucial bucket. Junior forward Corey Kispert, sophomore forward Filip Petrusev and Tillie have been catalysts at varying points this season, igniting a strong second-half outing in close games.

With a rivalry game in a hostile environment, there may be times against BYU where these leaders will have to step up and make a big play for their Bulldogs.

While the Zags handled BYU in the first meeting, the two teams match up fairly well on both ends. Each team shoots better than 50% from the floor and shares the ball proficiently, with both ranking in the top 10 nationally in assists per game. Combine these aspects and it results in two teams scoring more than 80 points per game, which ranks among the top 13 nationally.

Neither team has had the greatest success on defense thus far, with both ranking outside the top 100 in most major defensive categories. The Zags have the edge on the Cougars in those respective areas, but not by a significant margin.

So, what were the determining factors in that first game? The little things, and in a matchup where both teams are familiar with one another, the game can come down to hustle and fundamentals.

Another example is the 83-79 win over San Francisco on Feb. 1; the Bulldogs had four second-chance points off seven offensive rebounds. Extra chances to score can quite literally be the deciding factor for the Zags.

And in a contest where both teams shoot the ball well, whichever club can take advantage of missed shots will have a clear upper hand.

GU was also fundamentally sound at the free-throw line in its first win over BYU, shooting 19 for 25 from the stripe. That’s better than the team’s season average of 68.3% from the line, a number that has improved over the last five games, shooting 73.3% during this time.

With so many attempts in a single game, it’s a sign the Zags love to play physical basketball and draw fouls near the basket. GU has shot the fourth-most free throws in the nation and Petrusev leads the team with 197 attempts.

The sophomore forward has become more aggressive down low as of late and could continue the trend in the event  Tillie is still afflicted by an ankle injury on Saturday’.

Not only does physicality wear down opponents, it creates foul trouble for key players and forces teams to play more conservatively on defense. That was the case when GU drew 21 fouls from the Cougars, including four each from senior guard T.J Haws and junior guard Alex Barcello.

GU will also have to weather an amped-up BYU crowd. A win would boost the Cougars’ NCAA Tournament résumé and send out their seniors in emphatic fashion on Senior Night.

It will truly be a huge test for the Zags on Saturday at 7 p.m.