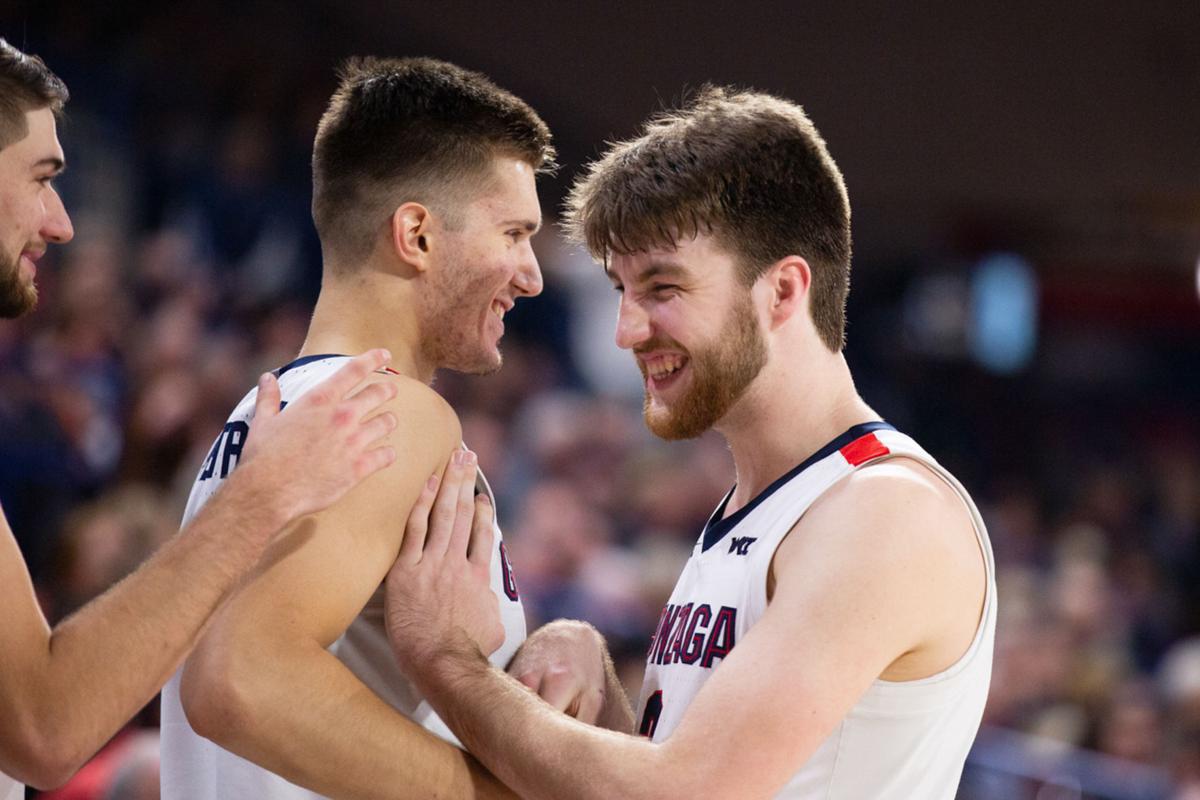 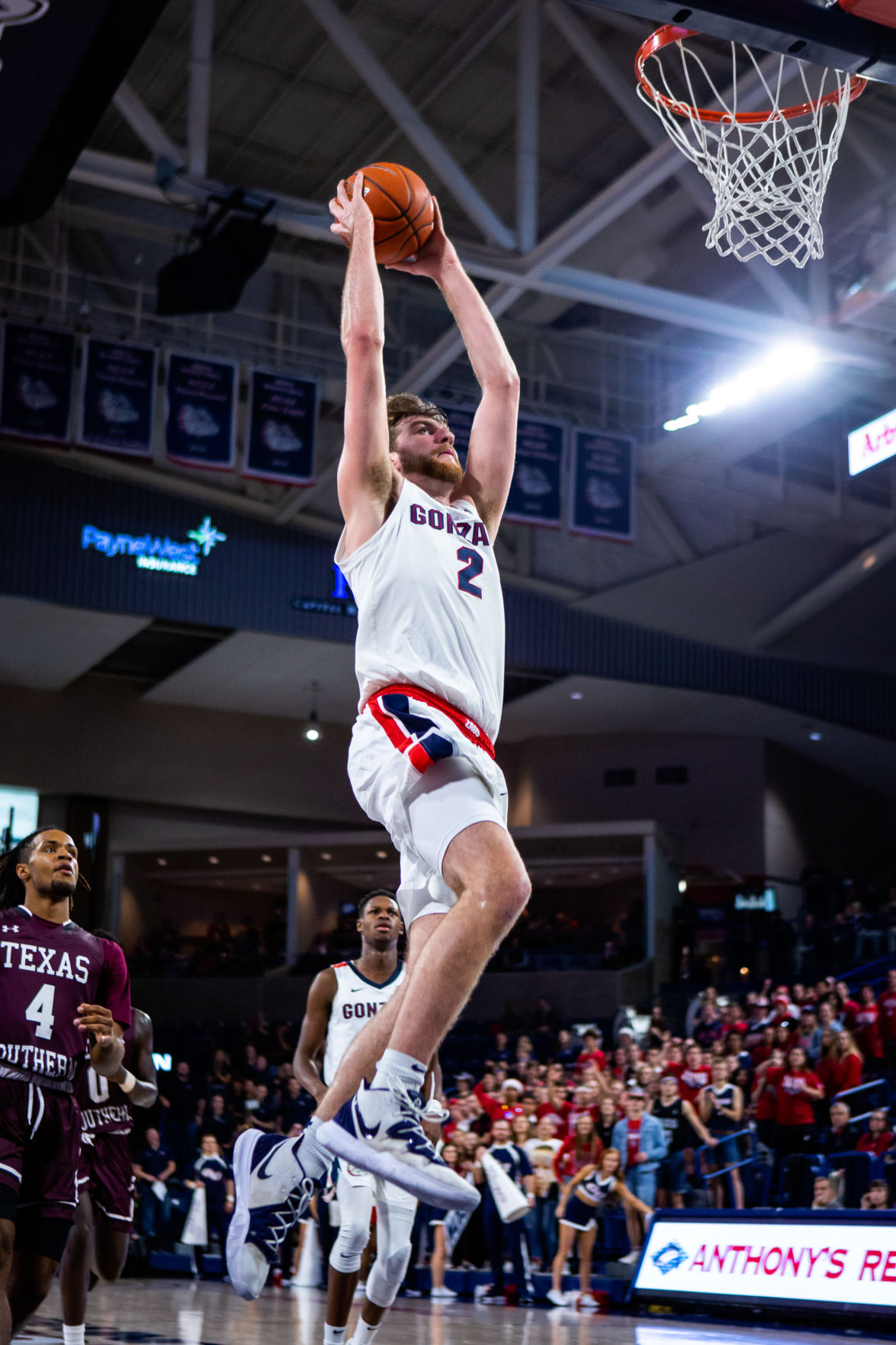 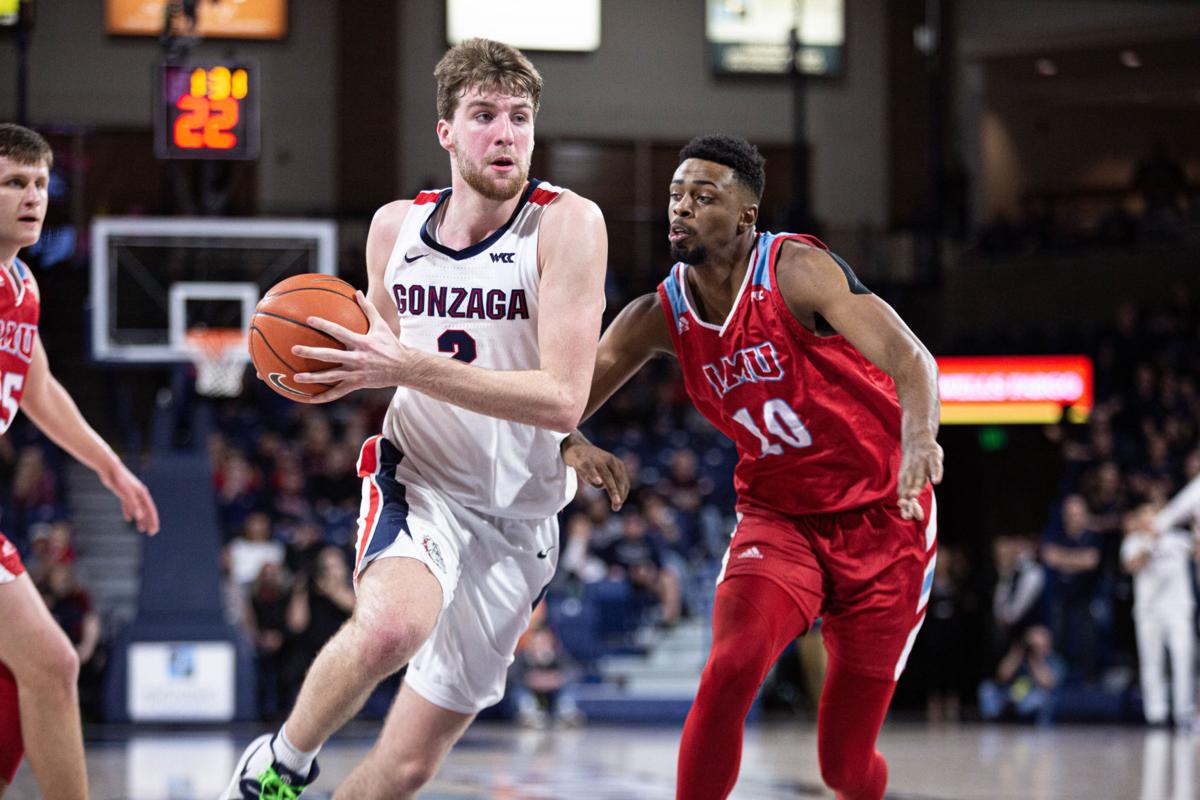 Gonzaga forward Drew Timme drives to the basket as the Gonzaga Bulldogs defeated the LMU Lions 85-67 Thursday night in the McCarthey Athletic Center on Feb. 6.

Gonzaga forward Drew Timme drives to the basket as the Gonzaga Bulldogs defeated the LMU Lions 85-67 Thursday night in the McCarthey Athletic Center on Feb. 6.

The tradition of Gonzaga men's basketball lives through the big man. Former players like Kelly Olynyk, Przemek Karnowski and Zach Collins paved the way for future big men like Brandon Clarke, Killian Tillie and Filip Petrusev to continue the legacy of dominance in the paint. It's a front court role that expects both greatness and growth to propel the program forward.

Freshman forward Drew Timme hopes to continue this strong tradition of successful Zags, as he has made a big splash during his first year in Spokane. The 6-foot-10 forward from Richardson, Texas, has stepped up to the plate for the Zags.

Timme has appeared in all 29 games for the Zags this year, averaging 9.9 points and 5.6 rebounds while shooting 61.6% from the field.

“I just play with fire and edge,” Timme said. “I think that’s something that makes me a little unique. It’s just who I am as a person, pretty outgoing and confident. I think that flows right onto the court.”

Before making his decision to head to the Pacific Northwest, Timme dominated at J.J. Pearce High School. The five-star recruit helped his team reach the second round of the state tournament, earning MVP of the 6A district in his senior season. Timme was ranked 41st on 247 Sports’ top recruits for the class of 2019, averaging 17.8 points, 10 rebounds and 2.6 assists at Peach Jam, an AAU tournament, in July  2018.

His high school head coach, Marc Johnson,  said he has not coached a player of Timme's caliber during his 18 years at Pearce.

“He’s by far the most dynamic player we’ve had,” Johnson said. “And to add to that, Drew being the type of kid he was and is and how much he loved his teammates and Pearce High School made it a special experience for me.”

After receiving offers from approximately 30 programs, Timme said he selected GU due to the coaching staff and fans.

Timme said he attended Kraziness in The Kennel before making his decision and had never experienced anything like the never-ending line of students for an intrasquad scrimmage. Timme said it blew his mind that people cared so much, and he learned how big basketball is in Spokane.

Growing up in a football state like Texas, Timme said he ended up choosing basketball because of his father, Matt Timme. Drew played wide receiver and defensive end until his freshman year of high school, following the path of his father who also played basketball, referring to him as his hero.

“It’s very rewarding to see that all of the hard work that he has put in is paying off for what he wants to get out of it,” Matt said. “I couldn’t be prouder of him. It’s been surreal to sit there and watch him at a program like Gonzaga doing so well and succeeding.”

Both Matt and Johnson said they thought Drew would not have a difficult time transitioning from high school to collegiate basketball. They were both excited for Drew to work with head coach Mark Few. Johnson said getting to learn from Few’s system would help Drew continue to develop his game and get him to the place where he wants to be in the future.

“Drew was very studious in determining where he wanted to go, and coach Few had a big, big influence on that decision,” Johnson said.

Few said Drew has been playing well in the last few games.

“He’s been on a phenomenal run here," Few said.  "We’ve been able to count on him all year.”

“They’ve made me a lot better,” Drew said. “Going up against two NBA guys [Tillie and Petrusev] like that in practice every day, it forces you to get better, and also, just them teaching me little things every day has helped me really evolve as a player.”

Although Petrusev stands a grade higher than Drew, he's been pleased with how Drew has matured in his first year, taking care of his body, stepping up big for the team and fulfilling his role.

“When [Drew] got here, he really dialed in,” Petrusev said. “He’s playing better basketball, paying more attention to details and really working on fundamentals. Him just being able to help us, step up this year,  have some minutes,  having him be able to contribute to some big-time games is huge for him and helps him grow.”

Along with praise from fellow underclassmen, veteran players on the team said they are excited to see what Drew can become for the program in the future. Tillie said he’s huge for the team, and he has been impressed with what Drew has been able to do so far.

“He doesn’t have to be the most athletic guy on the floor, but he’s the smartest guy,” Tillie said. “He makes great choices during the games.”

Junior forward Corey Kispert said their styles complement each other well, as Drew’s passing vision helps Kispert get open on the court and find his shots at the right spots. Kispert said he knew Drew was going to be special for the program after his game against San Francisco when he finished with 19 points in a 83-79 win on Feb. 1.

“We were all struggling," Kispert said.  "He was the rock that got us through that game and got us a run in the second half to win that game on the road.”

Drew received high praise from these two veteran teammates, who compared his impact to Domantas Sabonis, Collins and Petrusev. They said he has the ball skills of Sabonis, post moves of Petrusev and overall impact of Collins.

Matt, Johnson, Petrusev, Tillie and Kispert all agreed the common thread that runs through Drew is the dichotomy of calmness and fire he plays with. All five said they are all excited for what’s to come in the future for Drew.

“I’m excited to see him lead this team,” Kispert said. “Especially when I’m gone and when I end up leaving, he’s going to be a great leader and he’s got an electric personality.”