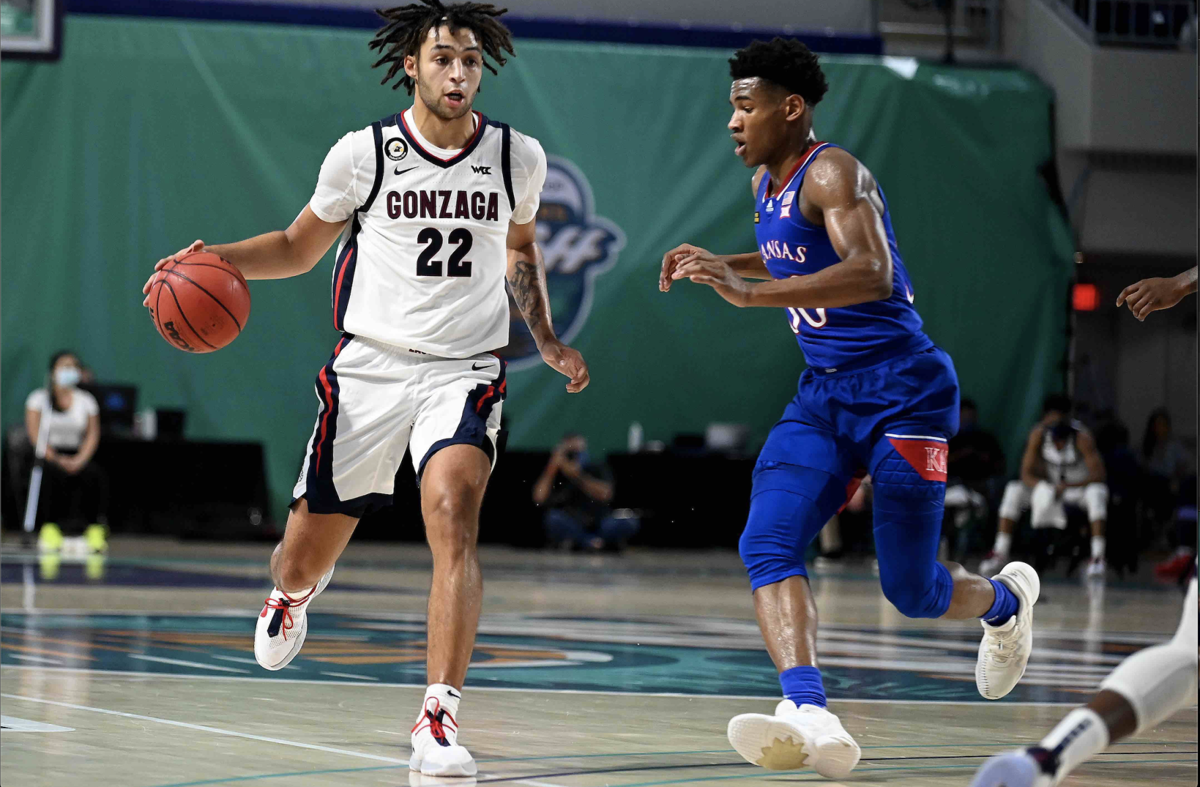 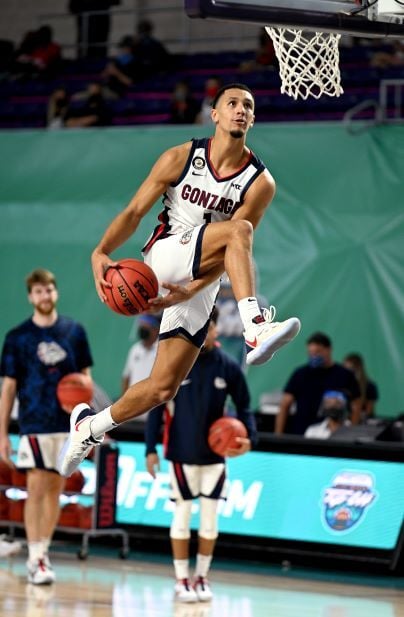 After 260 days of patience and waiting, the Gonzaga men’s basketball team hit the court for the first time this season in the 2020 Rocket Mortgage Fort Myers Tipoff against the University of Kansas, resulting in a 102-90 win for the Bulldogs.

Corey Kispert and the Bulldogs looked to start what could be a promising year for the AP preseason No.1-ranked team in the country. The Zags opened up the season with perhaps its deepest roster in recent history, headlined by guards Joel Ayayi, Andrew Nembhard, Jalen Suggs and Aaron Cook and frontcourt consisting of Drew Timme, Anton Watson and Oumar Ballo.

The Jayhawks came in as the No. 6 AP team in the country. Led by head coach Bill Self, David McCormack, Marcus Garrett and Ochai Agbaji, the Jayhawks were set to provide the Bulldogs with a challenging matchup.

The game opened up with a bang for the Zags, as Suggs completed a poster alley-oop from Ayayi after a steal from Watson. After celebrating the poster, Suggs received a technical foul. Following the dunk, the Zags took over and got a 14-6 lead after Self and the Jayhawks took their first timeout.

“I was super excited and really emotional,” Suggs said. “It’s been a long time coming in this journey transitioning from high school to college. It’s had its ups and downs for sure, and so when I got out there today, I was looking to play loose and really have fun with the game."

At the end of the first half, the Zags shot 68% from the field on 21 of 31 shooting. Shooting an even 50% from the field, Timme and Kispert combined for 34 of the team's 54 points, each finishing the half with 17 points. Kispert also passed the 1,000 point mark of his collegiate career in typical Kispert fashion, drilling a open 3 on the wing. The Zags also outrebounded the Jayhawks 19-6 in the first half.

The Jayhawks were led by Agbaji and Garrett offensively, ending the half with a combined 25 of the 46 points for the KU, finishing with 13 and 12 respectively. The Jayhawks had six turnovers after the first half, resulting in 11 points off those turnovers for the Zags.

The Jayhawks came out in the second half with a heightened defensive intensity. Getting out to a 10-3 run to start the half, the score was tied until Suggs and Nembhard followed with a few buckets of their own.

“We played a really good team,” Self said. “Those are the best guards we will play all year long.”

Following the 10-3 run, Suggs responded with a deep 3 and powerful drive to the basket, giving the Zags an 11-point lead. Followed by back-and-forth scoring and consecutive layups from Ayayi, the Zags gained a 14-point lead with four minutes left in the game.

The Zags finished with three scorers with 23 points or more: Timme led the Zags with 25, followed by 24 points from Suggs and 23 points from Kispert. The Zags also finished shooting 65% from the field and with 62 points in the paint compared with the 53% and 34 points in the paint for the Jayhawks. Ayayi and Nembhard added 15 and 11 points respectively, totaling five Bulldogs finishing the game with double-digit scoring.

For the Jayhawks, Garrett finished the game with 22 points, followed by 17 points from Agbaji, 12 points from Bryce Thompson and 11 points from Jalen Wilson.

Head coach Mark Few got his 600th win with Thursday’s victory against the Jayhawks and looks for win number 601 against the University of Auburn Friday morning at 8 a.m. on FS1.

“The most fun was just seeing how excited my guys were to play,” Few said. "That meant the most to me.”

Men's Tennis: GU matches up with every set of obtacles to come

Women's Volleyball: GU set to make its return for improvement

Women's basketball: Zags now 8-0 in WCC after win at Portland

Men's basketball: GU beats Pepperdine by 25 in the Kennel