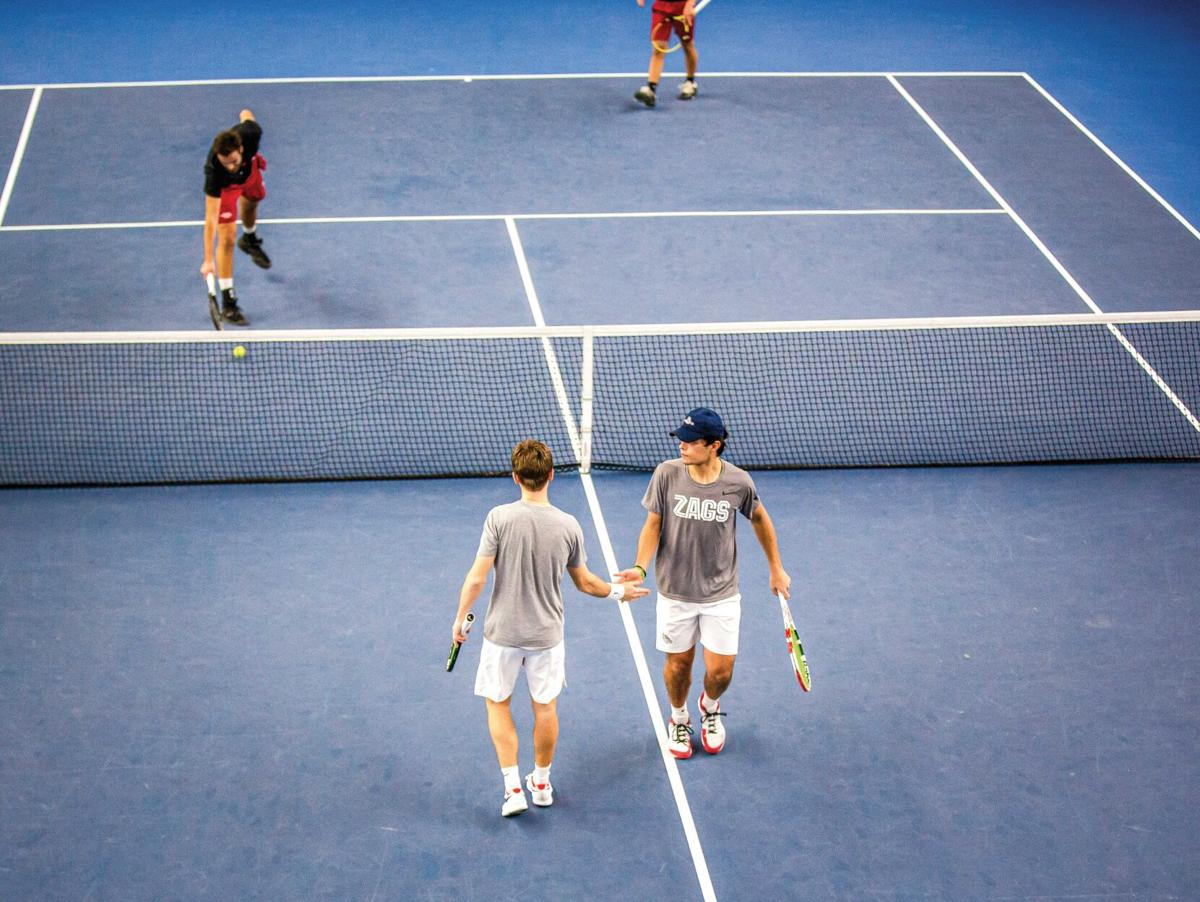 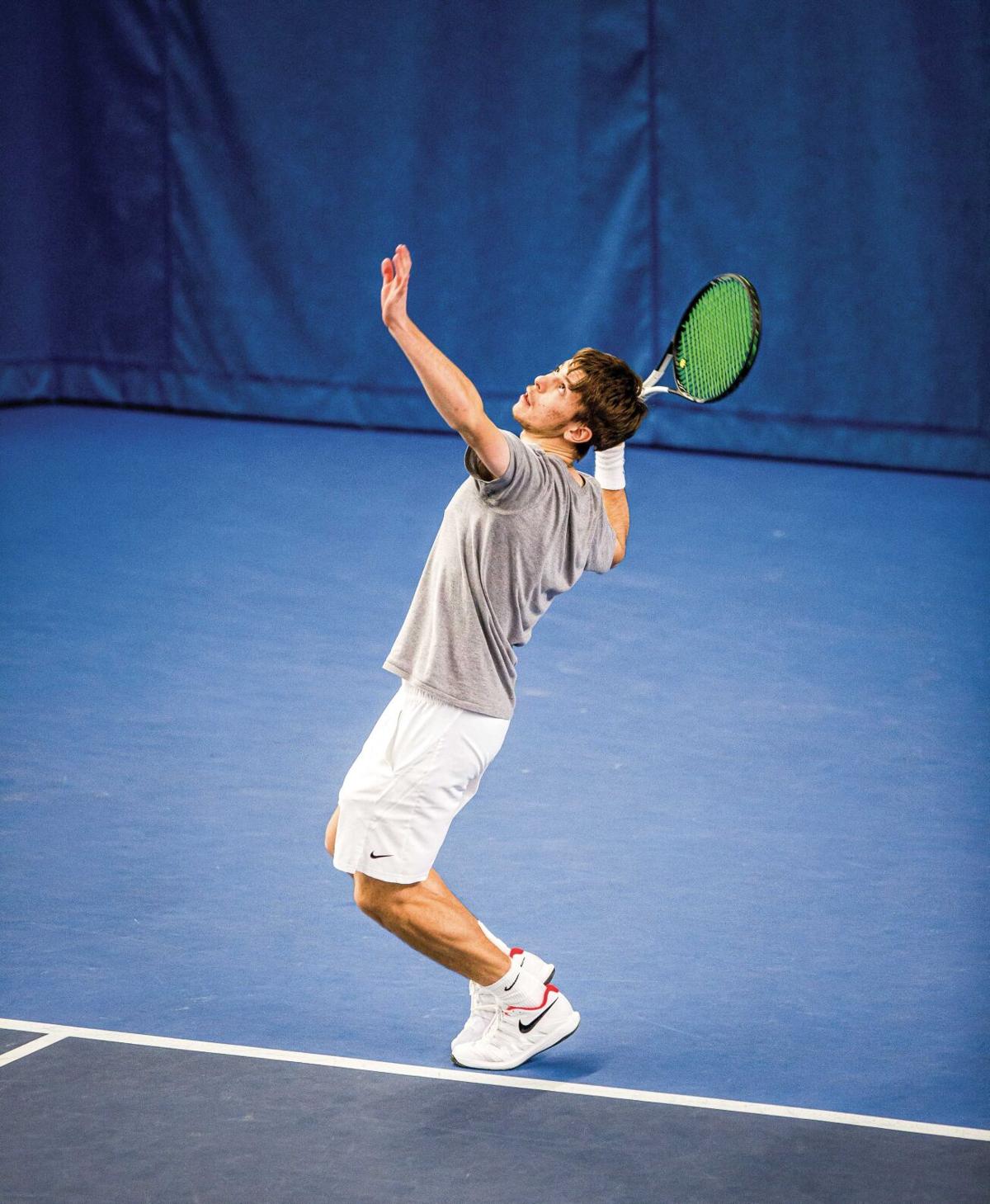 Junior Theo McDonald serves in a match against Eastern Washington.

Junior Theo McDonald serves in a match against Eastern Washington.

After an extended offseason due to COVID-19, the Gonzaga University men’s tennis season is officially underway as this year’s squad looks to build off their success from last spring.

“We just have a new appreciation of being able to play tennis and being together on the court,” senior Matthew Perkins said. “That’s kind of been our focus, just taking each day as something to be thankful for.”

The Zags were off to a historic start prior to the cancellation of the 2020 season. A program-best 10-4 record through 14 games earned GU No. 62 in the Intercollegiate Tennis Association (ITA) rankings, also a school record. GU also finished its campaign with an undefeated record at the Stevens Center, going 5-0 at home.

Luckily for the Bulldogs, many key contributors to one of the program’s best seasons ever have returned for 2021, including sophomore Matthew Hollingworth. He’ll look to improve upon his stellar freshman campaigns that powered such a strong start for the Zags the year before.

Hollingworth burst onto the scene and immediately made his presence felt on the singles and doubles courts. The Great Britain native proved himself as a formidable player in the fall when he advanced to the Round of 32 at the ITA Northwest Regional in Tulsa, Oklahoma. At the GU invite, he advanced to the finals following three singles victories.

“I think a key thing for me is just being clinical,” Hollingworth said. “And making sure that when I’m ahead, I stay ahead.”

The early success would only continue for Hollingworth as he set new school records for singles and doubles play. His 76.9% winning percentage was the highest by an individual while also setting a new benchmark with former Zag Sam Feit. The duo achieved a No. 33 ranking in the nation and notched a 14-10 record.

However, with the loss of Feit, GU will have to look elsewhere for the consistency and leadership the senior brought to the team. Feit finished second on the team in total singles wins with 16 while being the only Zag to earn an individual ranking at 118th in March. His 24 wins as a junior led the team that year, a true mark of consistency over the previous two seasons.

Fuchs, a Los Altos, California, native, was known as a multisport athlete in high school. He was ranked in the top-20 players under 18 years old in Northern California and claimed an ITA doubles championship. Fuchs also excelled as a first baseman and outfielder for Los Altos High School, as he was selected to the All-Santa Clara Valley League and contributed to his team winning the Central Coast Section Championship.

With an 18-11 record in high school, Fuchs has earned a Universal Tennis Rating (UTR) of 11 out of 16. This measurement accounts for a player’s performance against each level of competition as well as their overall record.

GU also landed an experienced player for his age in Gomez Galvan. Growing up in France, he first learned how to play tennis when he was 8 years old and progressed four levels in the French Tennis Rating by the time he was in middle school. His UTR is currently 13.2 with several victories over higher-ranked players.

Along with the freshmen standouts, sophomore transfer Leon Roider has also joined the team from South Carolina Upstate. Roider became one of the Spartans top players in his freshman season, as he compiled a 5-3 record in singles and a UTR of 12.58.

“All of the new guys are going to be a huge part of our success,” Perkins said. “They’ve really done a great job of coming in and buying into the program.”

Hadigan, a California native, is looking to replicate his impressive first season in 2021. In his collegiate debut, he tallied consecutive victories at the EWU Fall Classic, including a dominant 6-1, 6-0 win over Idaho’s Esteban Santibanez. Six consecutive victories concluded Hadigan’s fall season before finishing with an overall 14-6 record.

Perkins and Egger combined for 13 individual wins as juniors and have now stepped into leadership roles for their final season as Bulldogs.

“This is the first year where it’s Hunter and I leading the team as the older guys,” Perkins said. “I’ve always put an emphasis on the importance of leadership and it’s something I care a lot about.”

GU’s schedule features a handful of local foes including some familiar opponents from 2020. Along with EWU, the Zags will take on Seattle University, University of Idaho, University of Montana and Boise State once again in 2021. GU went a combined 3-0 against those programs the year prior.

Then, starting in late March, West Coast Conference play will commence for the Bulldogs. GU will have to take down the likes of San Diego and Pepperdine most likely if they are to win the conference. The Toreros finished atop the WCC last season with a 3-0 record in conference play and 8-3 overall.

Pepperdine cracked into the top-25 ranking to start this season following an 11-0 record the year prior and 2-0 in conference play.

“We have worked really hard to put together what we think is a really good schedule,” Head Coach Jonas Piibor said. “We are excited about the opportunities in front of us.”

An uncertain spring schedule could possibly be the only factor that prevents the Zags from continuing the momentum they gained before the gut-wrenching end to last season’s historic run.