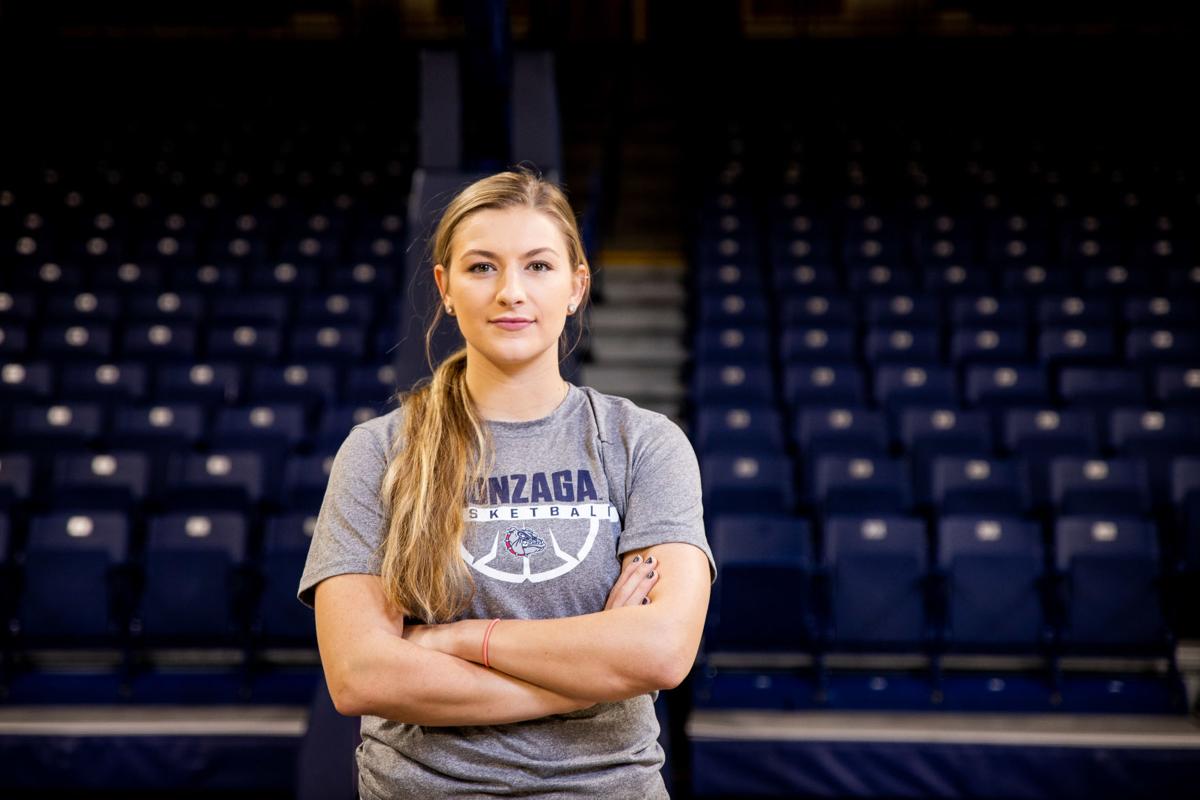 Laura Stockton is a senior on the Gonzaga women's basketball team. She is in the midst of her final season at GU. 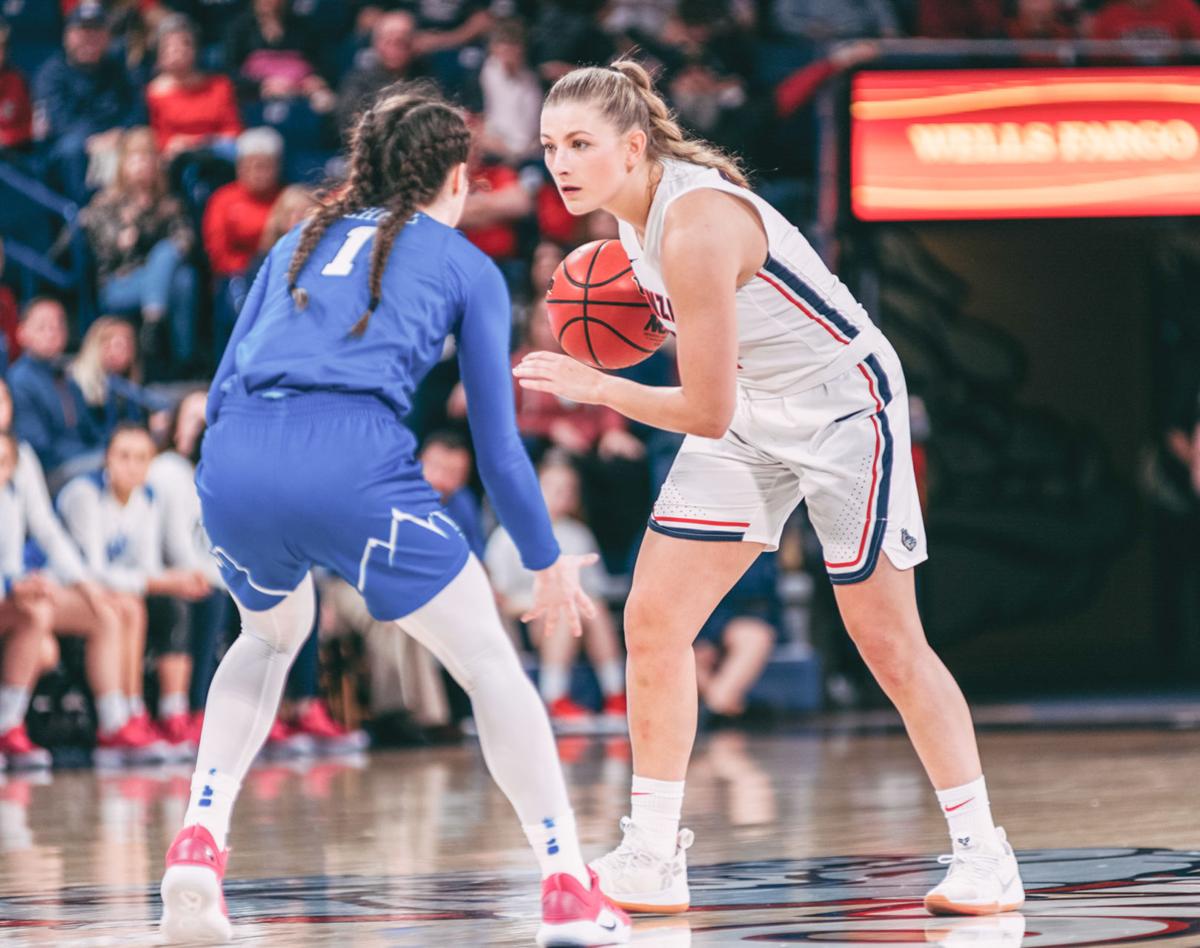 Laura Stockton is averaging 8.7 points per game for Gonzaga this season.

Laura Stockton is a senior on the Gonzaga women's basketball team. She is in the midst of her final season at GU.

Laura Stockton is averaging 8.7 points per game for Gonzaga this season.

She’s a senior point guard for the Gonzaga women’s basketball team who’s been a starter since her sophomore year. She’s a back-to-back All-West Coast Conference Preseason Team nominee. In her four years, she’s racked up 450 assists to go along with more than 900 points. Laura Stockton is not just John Stockton’s daughter.

Additionally, she’s basically a Spokane native. She’s lived in the Lilac City since she was 5. In high school, she played at Gonzaga Prep, less than two miles from GU’s campus.

After never having won a Washington 4A state title in Prep history, Stockton helped the Bullpups win two in a row during her junior and senior years. She was named the Seattle Times Player of the Year as a senior after averaging 17.4 points per game on 50 percent shooting.

When recruiting started, Stockton drew interest from multiple Division I schools, including some Big Ten and Pac-12 teams, as well as GU.

Originally, Stockton wasn’t sure if she wanted to be a Zag, she said.

“I honestly wanted to go elsewhere at first because everyone just assumed that I’d go to GU,” Stockton said. “So I think I wanted to break that mold and see where else I could go.”

But one visit to the campus made her realize GU is where she could grow the most while having the greatest success.

Head coach Lisa Fortier, who at the time of Stockton’s recruitment was an assistant coach, took the local guard on her visit.

“When we brought her on her visit as a recruit, we told her that she’s different than everybody else,” Fortier said. “That she’s not her dad, she’s not her brother and she’s not Courtney [Vandersloot]. But that what she is, is the next great point guard at this school.”

When GU recruited Stockton, coaches knew she would be a competent scorer and defender with solid court vision and an innate passing ability, but what they were really hoping to get was her competitiveness.

Fortier said the intensity she brought to the court was something that could rarely be matched by another player.

“We knew this when we were recruiting her, but what I’ll miss the most when Laura leaves is her desire to win,” Fortier said. “We have other good passers, we have good defenders, but I don’t think anybody else on this team has that desire to give everything they can either recklessly or under control.”

On Feb. 21, Stockton joined former stand-out GU guards Shannon Mathews and Vandersloot to become one of the school’s top-three all time in career assists.

In the past two seasons, she’s made it to the NCAA Tournament with GU, and hopes to make a third trip next month.

But what makes Stockton’s career at GU unforgettable comes down to more than just the tangible figures. Stockton is one of the most competitive and tenacious players to ever play in The Kennel and she’s been playing with that edge well before she stepped onto campus.

In her freshman year, Stockton wasn’t in the starting five. That season, the women failed to win the WCC and ultimately missed out on the NCAA Tournament for the first time in seven years.

Her sophomore year, she was determined to carve out a larger role, eventually starting every game for the Zags that season.

The Zags won more than 25 games, claimed the WCC championship and made it back to the NCAA Tournament.

The team saw similar success last season as well, winning 27 games and again taking home the WCC championship, awarding them a berth in the big dance.

Fortier told Stockton to take up a leadership role early on.

“We all just play a little harder when Laura’s on the court,” said Zykera Rice, a senior forward and Stockton’s teammate for the past four years. “We know how hard she’s working and it makes everyone want to work that hard too. She could be dog tired and you’d never know it, so it makes the team forget how tired they are.”

Off the court, she is anything but her in game persona.

“She’s kind of shy and unassuming,”  Fortier said. “When she’s on the floor she’s in her element. She’s ready to be a general and she’s running the show, but I don’t think that’s how she lives her life on the outside.”

“I’m just going to miss seeing these people everyday,” Stockton said. “You get used to it and it’s super fun. You become close with teammates, friends in general and coaches. And now when I leave I’m going to have to work a little bit harder for those friendships and have to call them a little bit more, which will be weird.”

Her coach echoed that sentiment.

“I love, and I can’t emphasize this enough, coaching her,” Fortier said. “I would take her all over again as a freshman if I could.”

Asher Ali is a staff writer.

Bulldog Bowl has Zags ready to hit the gridiron this Saturday

Mark Few's suspension doesn't feel like enough given his actions

GU women's rowing prepares for the season ahead after Oklahoma win