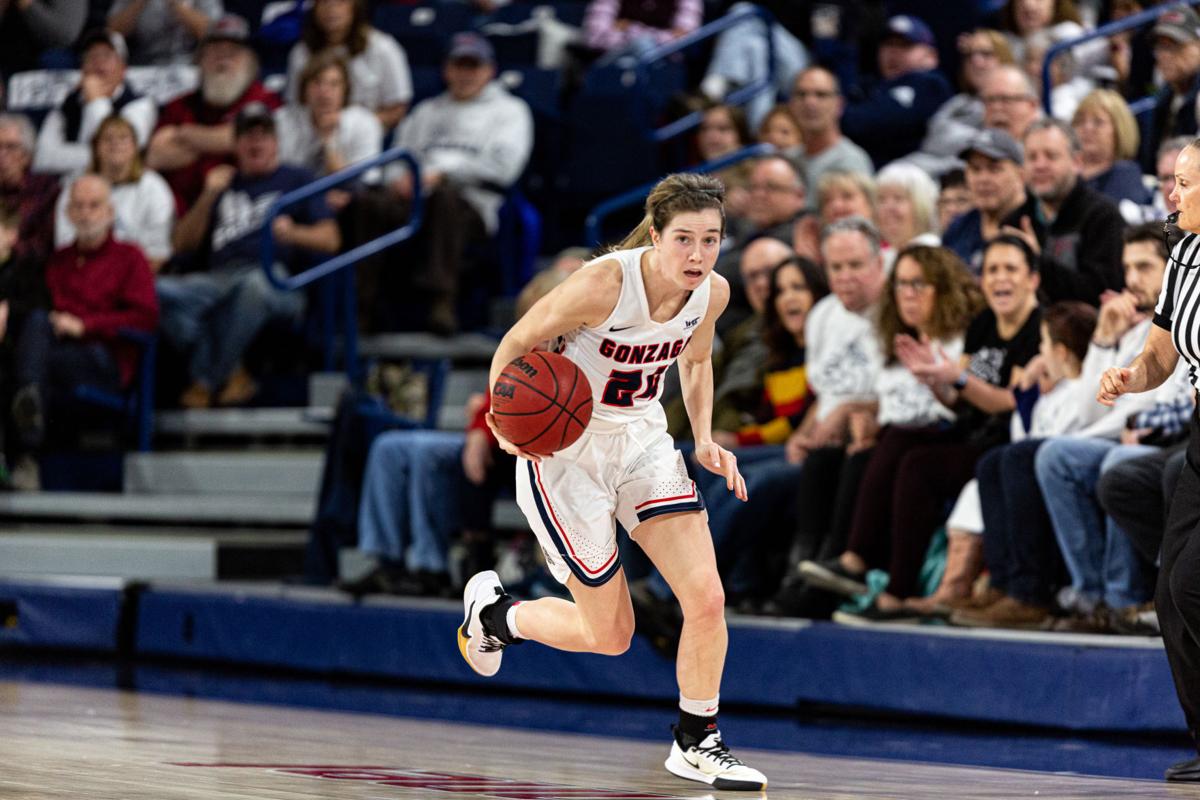 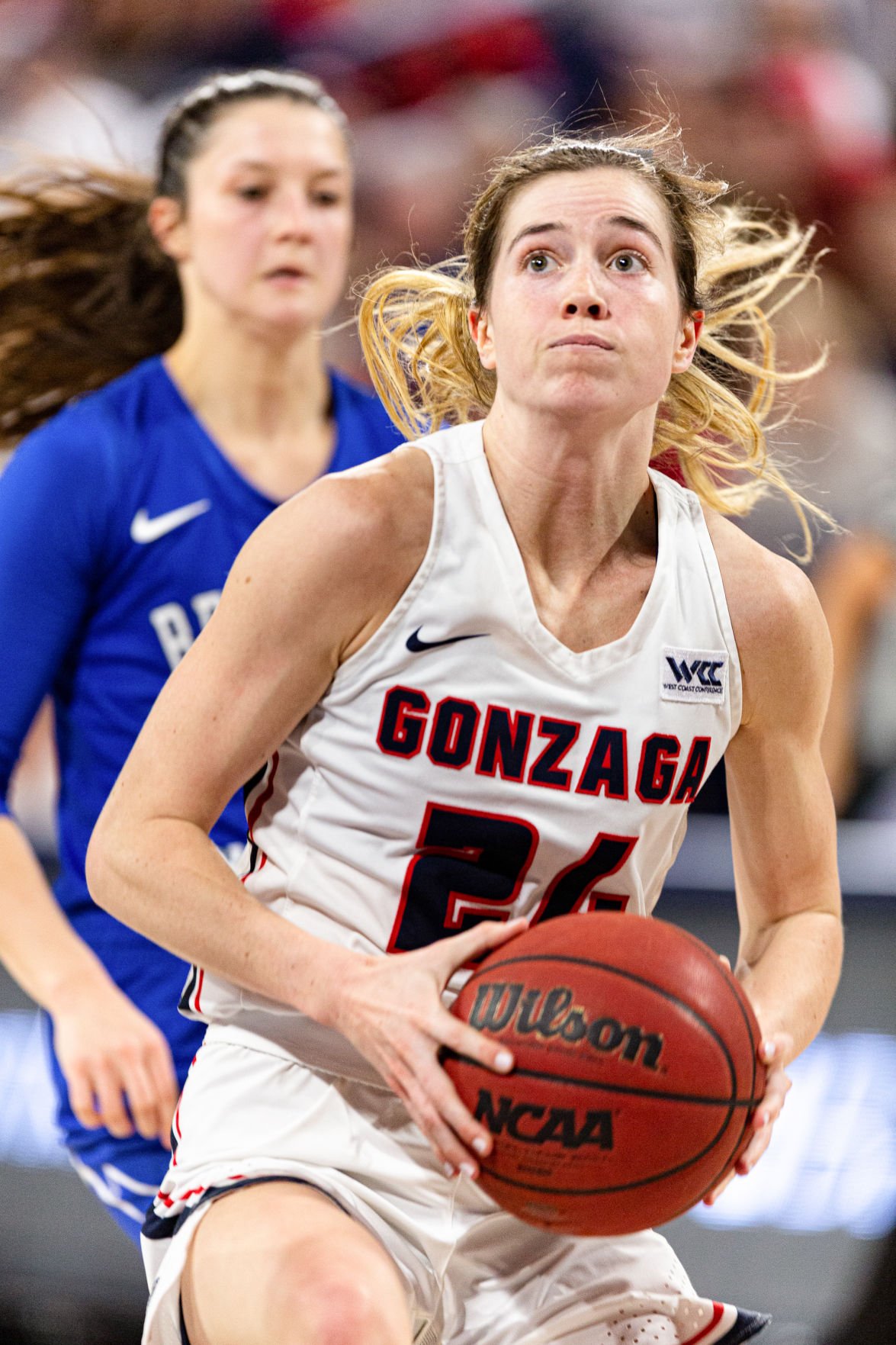 Gonzaga senior guard Katie Campbell goes up for a basket against BYU.

Gonzaga senior guard Katie Campbell goes up for a basket against BYU.

As is tradition for Gonzaga women’s basketball, the players clap in unison before heading to half-court together to begin practice.

And as it has been for the past week or so, senior guard Katie Campbell cannot join them there. A left knee injury suffered last week ended her season and cut short her final year at GU. Instead, she sits on a stationary bike off in the corner of the gym.

But she claps all the same. No injury could deny her a place on this team — she’s earned as much, according to her teammates and coaches.

“She's going to go down as one of the great Zags and has done some things that you haven't seen on the court since [former GU guard] Tiffanie Shives,” head coach Lisa Fortier said. “She’s an impressive basketball player and an impressive young woman.”

When Campbell left due to injury late in the fourth quarter against BYU on Feb. 1, a certain somberness set over the Zags after a win that should have been triumphant in every way.

Understandably so, as Campbell was a significant part of arguably the best team in program history. During her three years at GU, after transferring from Ventura College in Oxnard, California, Campbell gradually carved out a special brand of quiet leadership on and off the court — all while fulfilling her responsibilities as a mother to her daughter, Ava.

Beyond her 11 points per game and 43.1% 3-point shooting, she provided hustle and playmaking on both ends of the court.

“Her defense is something that she doesn't get credited enough for,” said junior Jill Townsend, who still touts two black eyes from an elbow to the face during the BYU game. “Everyone can see her 3s, but they don't think how many steals or deflections she gets a game. It's just huge."

Freshman guard Kayleigh Truong has moved into the starting rotation to fill Campbell's vacancy, but it will take a team effort to compensate for her absence.

“No one person's going to step up and fill her entire role,” Townsend said. “That'd be impossible for our team. You can't just fill a role like that.”

Last Saturday, in Moraga, California, the Zags’ winning streak — previously the longest in the nation — was snapped at 21 games by archrival Saint Mary’s. A season-best shooting effort from the Gaels was too much for a team still reeling from the loss of Campbell.

“For sure, we beat ourselves,” Townsend said. “Maybe Saint Mary's played the game of their lives. They went 14 for 21 on 3-pointers. But did we make them take tough shots? Did we contest everything? Did we play defense to where they get those open looks from 3?”

The week was already emotional. Now, compounded by its first loss in over two months, GU has no option but to refocus and reset.

“I think our practices have been a little bit quiet, I think we were a little bit down,” Fortier said. “We had last week to mourn the situation and you can't afford to be down anymore. We have to move on.”

But even then, tears welled in Fortier’s eyes when she talked about the senior she said “has always belonged here” mere days ahead of Senior Day on Saturday against Santa Clara.

“[Campbell] works so hard,” Fortier said. “She's so exciting. She gets steals, she's little and chasing people down. She takes charges, she has assists. Those are things that are big-time excitement, in-game momentum changers. I think that people like that about her. She usually does it with a smile, but she's not one to ever quit on anything.”

Those who have been on this team prior to the 2019-20 season are no strangers to such adversity. There’s plenty of similarities to be drawn to last year’s team, which lost Townsend and starting point guard Laura Stockton to season-ending injuries during the West Coast Conference Tournament.

The Zags face University of San Francisco at home tonight, hoping to regain lost momentum and keep moving forward. After all, postseason tournaments are on the road ahead.

“Things will happen, we can’t control it,” senior guard Jessie Loera said. “It's just us coming together as a team, figuring out what we need to do collectively as a group to keep going and keep doing what we do as a team on the court.”