Skip to main content
You are the owner of this article.
Edit Article Add New Article
You have permission to edit this article.
Edit
News
Sports
A&E
Opinion
Multimedia
e-Edition
Minizags
About Us
Classifieds
1 of 2 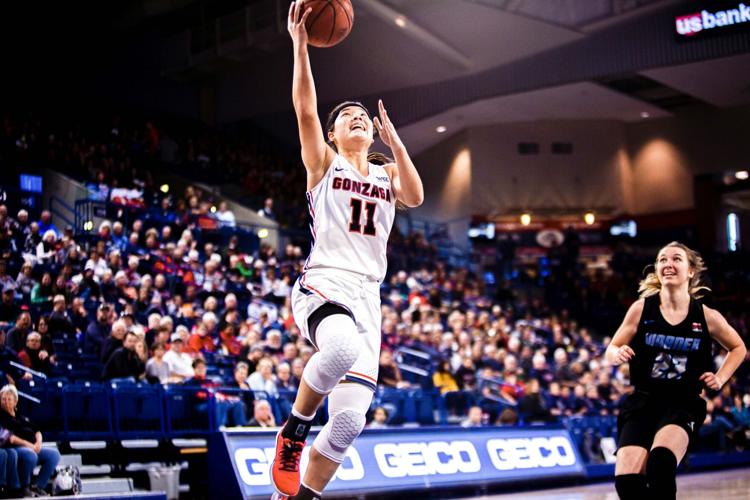 Gonzaga sophomore guard Kayleigh Truong is averaging 8.2 points and 4.2 points per game for the GU women's basketball team this season. 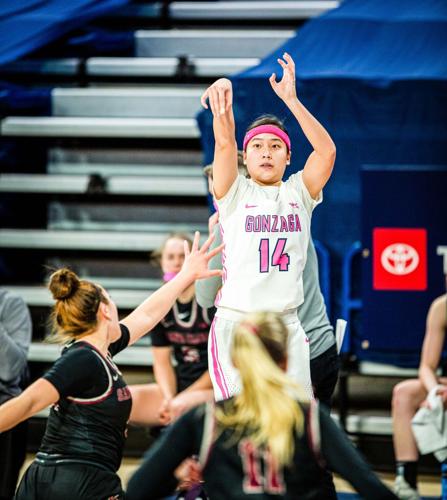 Gonzaga sophomore guard Kaylynne Truong is averaging 4.0 points and 3.0 assists a game for the GU women's basketball team this season.

Gonzaga sophomore guard Kayleigh Truong is averaging 8.2 points and 4.2 points per game for the GU women's basketball team this season.

Gonzaga sophomore guard Kaylynne Truong is averaging 4.0 points and 3.0 assists a game for the GU women's basketball team this season.

For Kaylynne and Kayleigh Truong, guards on the Gonzaga women’s basketball team, their basketball journey began with an incident in their family’s garage.

“How we got to it was actually funny because our dad had basketballs laying around in the garage and one day Leigh comes in and tripped over a basketball and was like ‘Man, I’m never going to play basketball,’” Kaylynne said. “Then our parents said it would be good for us so they put us in little league and that’s where we started.”

Well, they found out they were pretty good at this game and in eighth grade they started taking it seriously, mainly to find a way to help their parents pay for their college education.

“I want to say that we got serious around eighth grade because we had joined a summer team where our coaches were telling our parents that we could be able to earn scholarships and get our school paid for through basketball,” Kayleigh said. “When we found that out we thought we needed to work hard so we could help our parents through college. I know how expensive college can be, so it was a way of repaying them for all their time they dedicated and spent taking us to practice and tournaments.”

According to Stacy Clinesmith, an assistant coach and the Truongs’ position coach on the team, she knew they immediately were Zags.

“My first memory of them is watching them while I was recruiting them on their Texas club team,” Clinesmith said. “The first thing I thought was ‘Oh my gosh. These girls can play.’ I remember thinking that in my head and thinking they needed to be Zags.”

However, this realization did not come as immediately to the sisters.

“After we sat down for a while and talked about it we got our priorities straight and it wasn’t just about football and merch and stuff like that,” Kayleigh said.

Fair has also played a big role in the Truong’s decision to come to GU. Coming to a Jesuit intitution was something that was important in their decision, making them feel more comfortable.

“Then we talked more and wanted a family atmosphere and Spokane has a great tight knit community where you will be supported wherever you go,” Kayleigh said.

They got their first experience of this tight knit community on their first few visits to Spokane where they met their teammates for the first time.

“It was G [Gillian Barfield], Kylee [Griffen] and Anna [Virjoghe], they were our three main hosts and they took us around and we hung out with them,” Kayleigh said. “They were looking for the same things we were — that family atmosphere, able to feel like you’re taken care of especially when you’re away from home and they were just very welcoming.”

Barfield distinctly remembered the first time she met the Truongs. She recalled how they both needed parkas because they had never experienced Spokane winter before.

“The first real memory I have interacting with them was on their official visit they stayed in my apartment with me, and we were trying to break their shell because they were super shy on their visit,” Barfield said. “We turned ‘The Office’ on and started dying laughing and from that moment on I thought they were pretty cool.”

Both Barfield and Clinesmith both remember how quiet the twins were when they came to campus and noted their growth in confidence over the past few year.

“They have become so much more confident in themselves,” Barfield said. “They’ve always both been amazing basketball players and always had that ability but now they’re really performing at such a high level on the court because they are so much more confident in themselves. Everyone on the team has complete faith in them that they’ll handle any pressure thrown at them and make whatever shot they need to make, and they’ll give everyone buckets by giving assists.”

Clinesmith noted that their growth over one year is impressive and how she cannot wait to see how they grow in the coming years.

“They’re only going to get better and better,” Clinesmith said. “They both have such a high basketball IQ. They know where the opening is going to be before it’s even open — they’re those kinds of players. I think the bigger question is [whether] our other players [are] going to be ready for the pass when they pass it because sometimes, they know it’s going to be open before that person that will be open does.”

Off the court Kayleigh and Kaylynne are both committed to their education and community service. They also have a myriad of hobbies and talents including, but not limited to, biking, napping, playing the ukulele, solving Rubik’s Cubes and fishing with their dad back in Houston.

They are also both dedicated to and love community service. Noting that one of their biggest accomplishments was helping out when Hurricane Harvey hit their hometown in Texas.

“The least we could do was donate and go to the church to see how we could help out,” Kayleigh said. “To give a little bit back even though it may be small to us could mean the world to them and she tells us that all the time.”

Ultimately the sisters’ main goal is to be a good role model for young girls.

“We faced a lot of adversity growing up because we are Asian and we wanted to play basketball,” Kaylynne said. “I would say my advice for young girls who are feeling left out because of how they look or their race or ethnicity I’d say to lean on the people who actually support you because not everyone is going to have the best intentions for you. You have to lean on the people who love you for who you are.”

“We didn’t have a role model to look up to,” Kayleigh added. “We were told that we weren’t able to do this because we are Asian. Kind of like what Lynne was saying and just to reiterate it, we want to be role models to the younger girls who aspire to play basketball and encourage them to keep playing if they love it.”

They also value their family and everything they have given them a lot and want to make them proud.

“It was hard for them coming as immigrants to a country they weren’t expecting to be in,” Kayleigh said. “Grandma didn’t speak good English, so she was in a foreign country where she was trying to raise my mom basically. Both our mom and dad, and our whole family, have worked so hard to get to where they are at and to provide for us. I’m forever grateful.”

According to both Clinesmith and Barfield, the sky is the limit for Kayleigh and Kaylynne and both cannot wait to see where life takes them.

“I think they’re only going to get better and better in our system,” Clinesmith said. I can’t even imagine how amazing they’re going to be as seniors here, they’re doing such a great job as sophomores.”

Gonzaga falls to Baylor in first rematch since championship game

Hunter Sallis rhymes, dimes and climbs into the rotation for Gonzaga

No. 23 Gonzaga readies for challenge against second-ranked Stanford

Zags look to avenge 2021 championship loss in rematch with Baylor