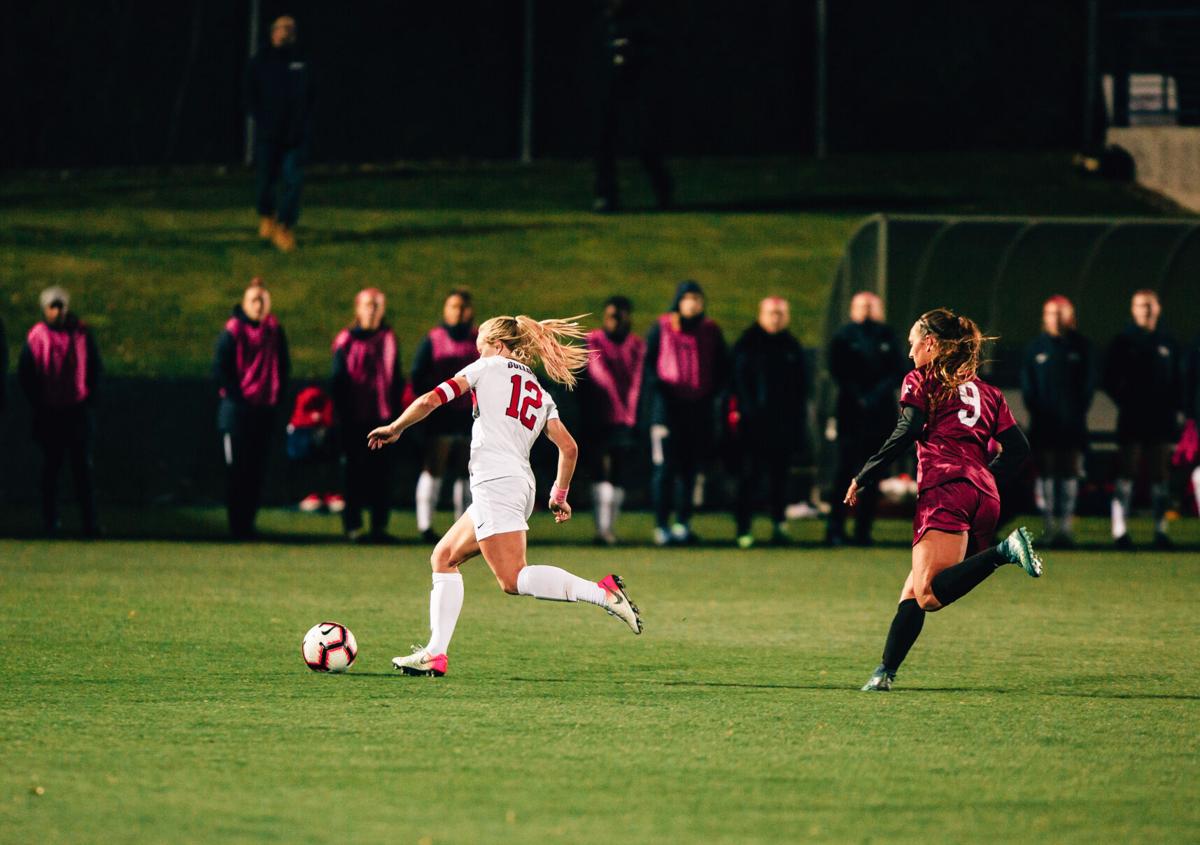 Gonzaga co-captain Jordan Thompson looks to lead the Zags to a WCC championship and an NCAA tournament bid this season. 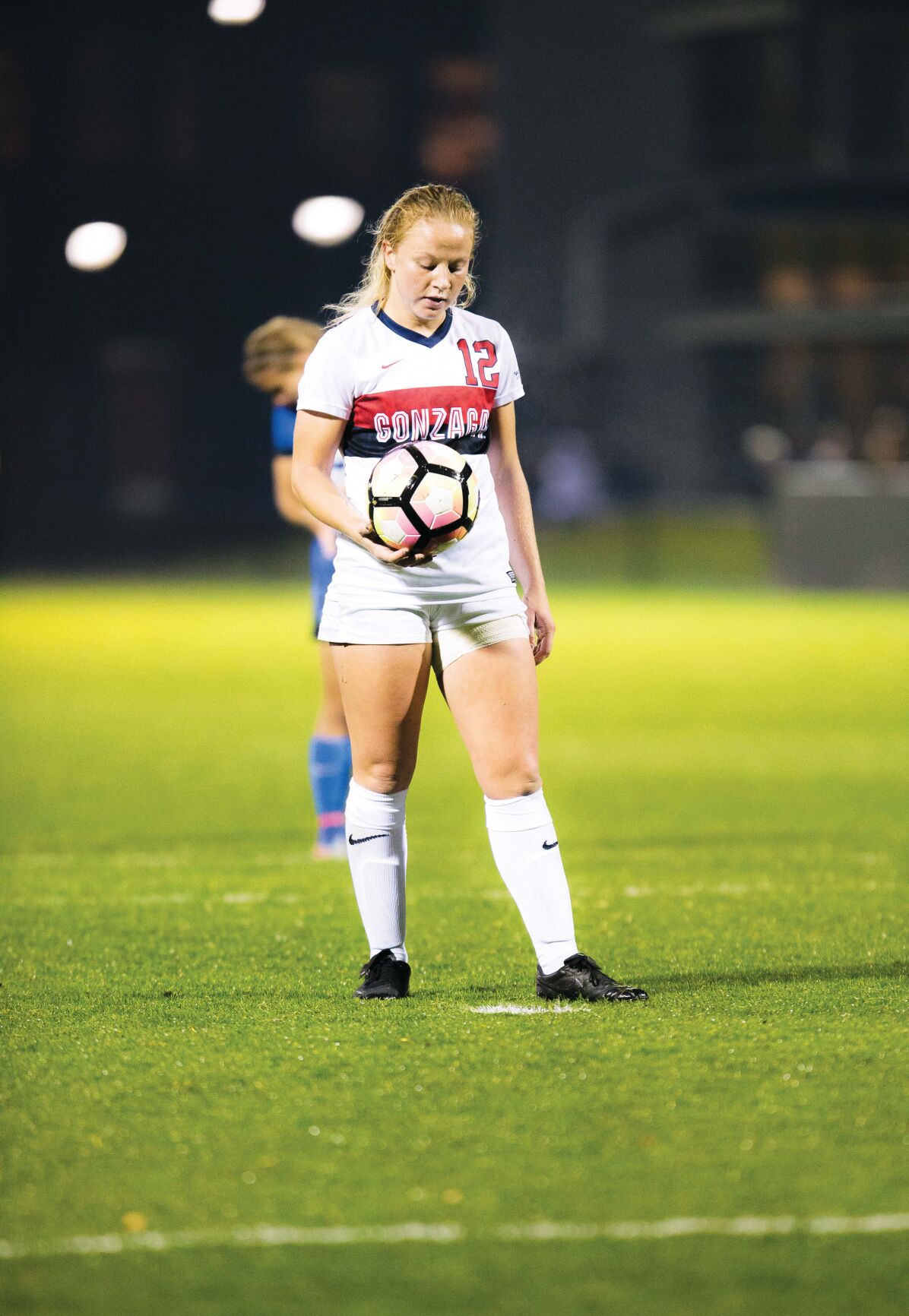 Gonzaga senior Jordan Thompson prepares for a penalty kick that she scored in a 6-3 loss to BYU last season.

Gonzaga co-captain Jordan Thompson looks to lead the Zags to a WCC championship and an NCAA tournament bid this season.

Gonzaga senior Jordan Thompson prepares for a penalty kick that she scored in a 6-3 loss to BYU last season.

Jordan Thompson, senior co-captain of the Gonzaga women’s soccer team is not only incredibly athletic and talented, but is a skilled soccer player as well as a leader and inspiration for her teammates and coaches.

Along with soccer, Thompson has competed in volleyball, basketball and track and even broke multiple school records in a single meet for track and field in high school.

However, soccer has always been her love and her focus. Thompson said she has been playing soccer since she was four or five years old and has always loved it. She even won the state championship her freshman year of high school and scored in the championship game.

“I loved everything soccer was about,” Thompson said. “I chose to play at the collegiate level because I had so much love for the game. I wanted to continue to play competitively at the highest level I could.”

Thompson said that GU felt like home ever since she stepped foot on campus. She loved the academics and class sizes, and was drawn to the coaches, support staff and girls that were on the soccer team.

It didn’t take long for Jordan to begin making a name for herself here at GU. Chris Watkins, head coach of the GU women’s soccer team, said that during Thompson’s first practice with the team as a freshman she won the fitness test. He stated that if there was anyone who did not know Thompson’s name before that, they knew it after.

To kick off her collegiate soccer career, Thompson started and played in all 19 games, recording the highest shot on goal percentage of the whole team and earning herself All-WCC Freshman team honors. She also earned a position of co-captain for the 2018 season and has continued to lead the team as a co-captain every season since.

Watkins said that his favorite memory of Thompson was during her first game for GU, which showed what kind of player and person she was going to be for the team in the coming years.

Watkins explained that in Thompson’s first game for GU in a scrimmage against Boise State University, she was knocked out for a few seconds after going for a head ball and colliding with another teammate. After only a few minutes on the sideline, she was anxious to get back in, and in their next match she did not hesitate when in the same situation.

“She knew her role and has been just as committed ever since,” Watkins said

Thompson said that being able to train in such a competitive environment here at GU has greatly impacted her as a soccer player. She stated that the way everyone on her team, from freshman to seniors work so hard every day makes it impossible not to continually get better.

Thompson said she is motivated every year by the possible opportunity to be able to compete for a WCC championship and make it to the NCAA tournament. However, Thompson’s key motivation for working so hard on the field every day is her teammates.

“The biggest impact on me has been being surrounded by some of the best people I have ever met,” Thompson said.  “My teammates are my best friends and they have made me into the player and the person that I am today.”

Thompson stated that it is almost impossible to pick a favorite memory from her time at GU.  One of her best memories was her sophomore year when the Zags beat Portland for the first time in school history on senior night.

“Being able to see our hard work pay off that night and for the seniors to go off on such a great note was unmatched,” Thompson said.

She said she loves game nights since being able to play with her best friends under the lights of Luger field is the best feeling in the world.

Thompson has recently applied to law school. Watkins said that his advice to Thompson would be to run for president, because she could do that just as well as she leads the soccer team.

“Jordan is committed to being her best. She puts in the time and focused effort to improve her weaknesses every minute, every day,” Watkins said.

Thompson encourages her teammates to enjoy the time they get on the field and as part of a team, and to give it everything they have.

“I think you hear it every year, but you don’t realize it until it’s your last chance to play but it goes by so fast,” Thompson said. “Remember to have fun, and on the hardest days, remember how much this sport has done for you, and all the people and opportunities it has brought into your life.”